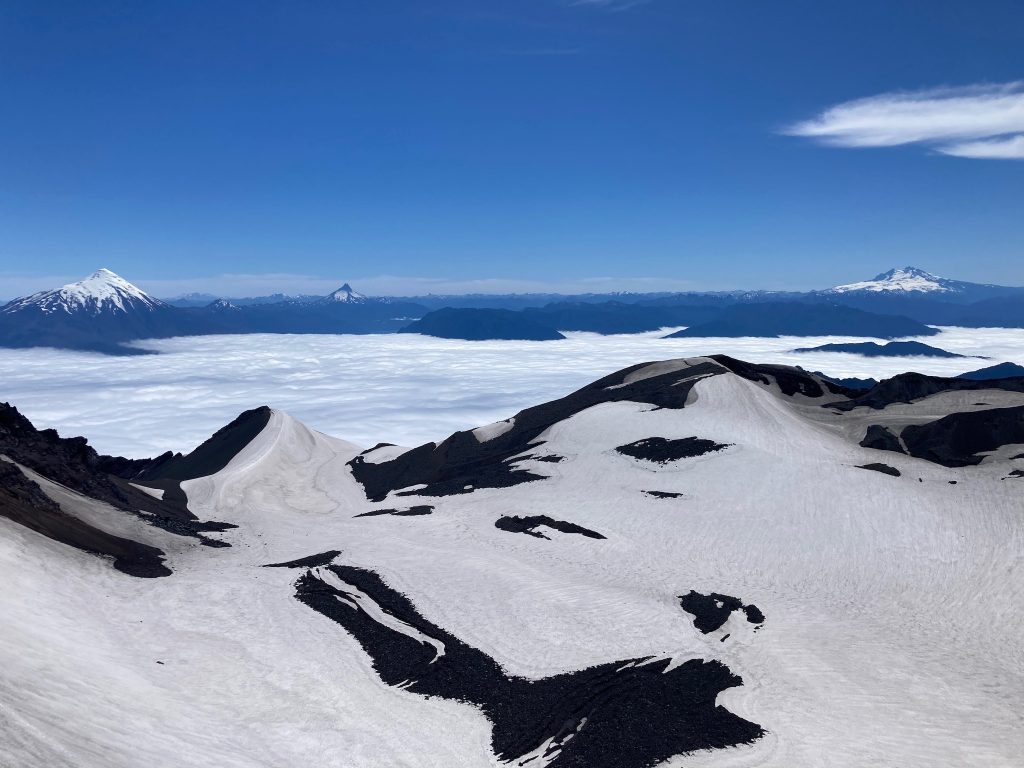 Volcan Calbuco is an inactive volcano between Lago Llanquihue to its north, and lower but more impressive peaks to its south. Though it has a glacier high on its southeast side, it looks like a mound of forest and choss from most directions, far less impressive than neighboring Osorno. However it has an all-important trail through the forest, a bit of low-fifth scrambling near the top, and the all-important 5000 feet of prominence to make it appealing to gringo peak-baggers. It is also only a short detour on the way from Osorno to the Carratera Austral, so it was a natural objective for me on this trip. 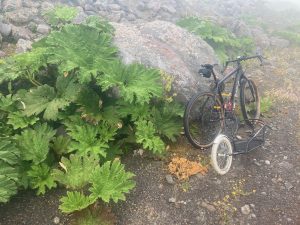 I woke in fog and wetness at my camp next to the threatening-looking plants, and took my time preparing for the climb, giving the fog time to start burning off. Said plants look like an upgraded devil’s club, with spiky stems up to ten feet long and broad leaves up to five feet across, and a club-like fruit or seed body that grows from the base rather than one of the leaves. I was fearful of them at first, but it turns out they are not venomous, and I even saw a local carrying a couple of leaves bare-handed by the stems. I did not know much about the route, so I brought ice axe and crampons for the final part. 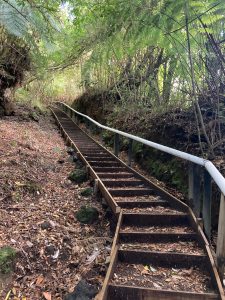 The trail through the woods is an impressive labor, with stairs, railings, and extensive boardwalks through the boggy sections. After a mudslide apparently destroyed a fish hatchery at its base, it has been closed, with multiple layers of signs indicating such. Farther up, there is a guard station with a semaphore-style gate that is lowered to provide another level of closure. More recent flagging suggested that this “closure” was widely ignored, but it still dimmed my mood. Another of my least favorite aspects of American culture that Chile has adopted is capricious and over-broad laws that are selectively enforced. In the States, this is most visible in traffic laws, where one is almost always doing something illegal while driving, but whether you are pulled over depends upon other factors, such as whether one is black or driving near a poor small town with out-of-state plates. Starting out alone in the morning, I had no way of knowing whether I would be fined and deported by armed CONAF agents or, as actually happened, meet a half-dozen Chileans out for a hike on my return. 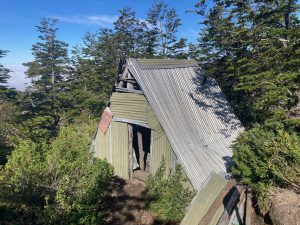 The trail passes the information/guard station, then crosses the path of the mudslide to parallel it on the ridge to its left. The jungle is incredibly dense, with moss on everything and no hope of progress without a trail. Fortunately the trail itself is, though boggy in places, clear and wide enough to avoid a brush-washing. There must not be many large animals in this part of Chile, because I did not see any game trails or non-human prints along the way. The official trail ends at a semi-destroyed hut made of corrugated metal that was likely flown in by helicopter, with another sign warning that climbing Calbuco was serious andinismo. I forget if this one forbade climbing without a guide, but I was definitely not supposed to be there solo. 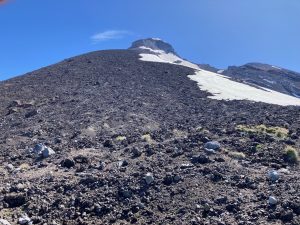 Beyond the hut, the trail actually continues left of the mudslide, but I lost it and followed the open slide directly, which seemed easier. However I was not sure how easy it would be to exit the top, so when I realized my error, I picked my way carefully up one loose side to find the flagged climbers’ trail. As the brush thinned and disappeared and the day warmed, the giant biting flies began to emerge, but they were few at this altitude, and easy to swat as always. The final climb to the base of the summit cliff-band was incredibly tedious, with much backsliding on baseball-sized rubble. There was a bit of snow to the right, but I found it easier to stick to the bits of use trail. 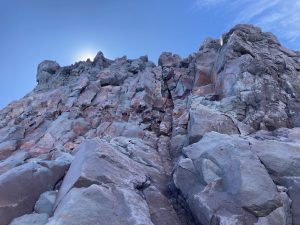 From where the bits of trail reached the rock step, I moved slightly left to find a more broken section of the cliff. It seemed like there might be a few ways to climb it, but the easiest and most secure was a chimney on the left. I was wary of the volcanic rock, trying to climb with counter-pressure when possible, but it seemed solid, with sharp, positive edges and good friction, making the steep pitch of climb fun and engaging. Above, another scree-slog led to the base of the summit knob, which was made of the same stuff as the cliff band, but no harder than third class. 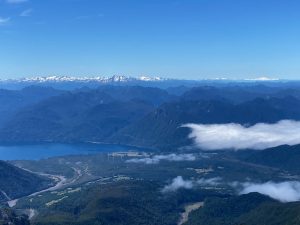 I was above any lingering fog, with clear views to the much more impressive Osorno and Tronador to the north and east. To the south there is a lake, with more jagged and glaciated peaks beyond. According to my map, this section of Chile east of the Carratera Austral between Puerto Montt and Hornopiren is mostly trackless, with the deep valleys and thick vegetation making it nearly inaccessible. It is home to the suggestively-named Lago and Pico Inexplorado, making it even more intriguing, and would have been worth learning more about if I were spending a lot of time in the area. The summit was warm and fly-free, so I spent some time eating and taking a nap before heading back down. 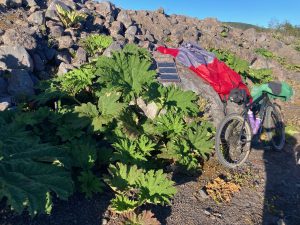 Trying to dry everything

The flies were much more awake on the descent, so I dodged and swatted as best I could. While they are persistent and too fast to outrun, they only seem to attack in open sun, and get lost or lose interest in shade and forest. I passed two guys with lots of gear headed to the shack for a summit bid the next day, and a few casual hikers lower down. I also noticed that the semaphore gate was up and the guard/information house seemed to be open, but I passed quickly and quietly lest someone start asking questions. With an unused ice axe and crampons on my pack, I looked extremely guilty of heinous crimes. I had hoped to bathe in the river on my return, as it was hot out and there were nice rock dams and pools at my campsite, but the flies were out in force, disappearing only after it had become too cold in the evening. I had grown comfortable with my own stink, though, so it was no great loss. Rather than reentering the land of barbed wire, I settled in for another evening of free camping next to a water source.

Trying to dry everything

Of course it’s not allowed

Fly with water bottle for perspective