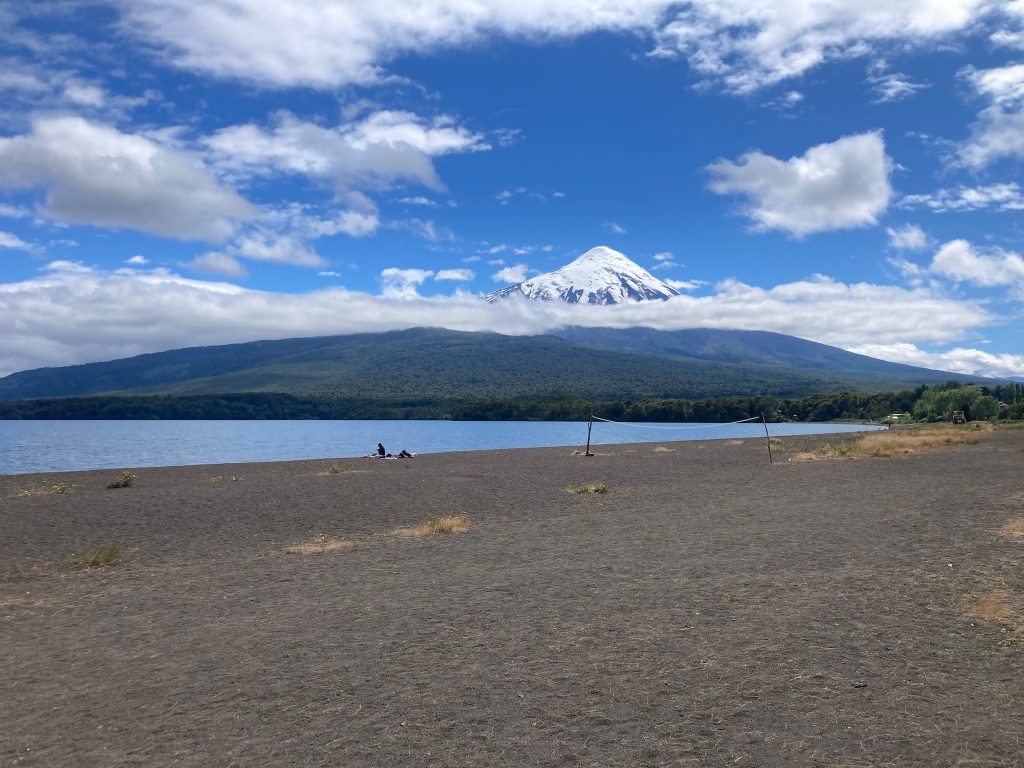 Volcan Osorno is a symmetric, glacier-clad peak near Lago Llanquihue, the largest lake in this part of Chile. It is a landmark intermittently visible from days’ ride in every direction, the site of a ski area, a popular tourist attraction, and a moderate climb. Given that, I assumed that the crux would be getting past CONAF (the COrporacion NAcional Forestal), which would probably either close the peak or impose arbitrary requirements. Perhaps because I started early and hiked past the snack bar rather than the refugio, I did not encounter any checkpoints. But even the sign above the highest lift merely said “danger beyond this point” rather than “closed,” so Osorno may be free to climb. 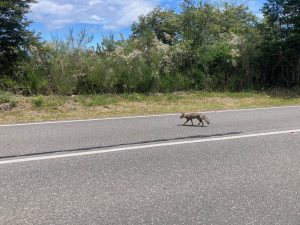 The giant flies take even longer than I do to get started in the morning, so I was able to pack up without being bugged. I retraced my route partway around Lago Rupanco, filling up on water at one of the many roadside cascades, then took off on another dirt road leading more directly toward Lago Llanquihue. It was slow on the climbs but mostly in good shape, and I returned to pavement without too much trouble. The next day’s forecast was wet, and I needed to resupply, so I aimed to stay in the town of Ensenada at the base of the peak rather than riding directly to the ski area. It began drizzling as I approached Llanquihue, but stopped for my ride around the lake. I caught glimpses of the lake to my right through breaks in the clouds, and admired the many cascades cutting through the rain forest to my left. Though a fair distance from the ocean, this part of Chile is incredibly lush, similar to the western Cascades. 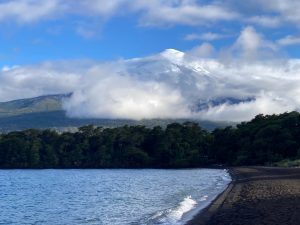 I topped up on gas and bought a couple days’ food, then rode over to one of the campgrounds that supposedly had WiFi. It did have that, but only right around the restaurant, and it was otherwise disappointing, with dirty lukewarm showers and sad picnic tables. Worst of all, it supposedly cost $30 per night! The woman I spoke to seemed embarrassed by the price, and offered to charge me $15 instead; she even threw in a private bathroom (i.e. my own indifferently-cleaned toilet and sink), which seems to be a selling point in Chilean campgrounds. I believe it was the Christmas holiday, so there was a busload of students on a backpacking trip staying there, but they fortunately partied or slept in another area, so I had some quiet. 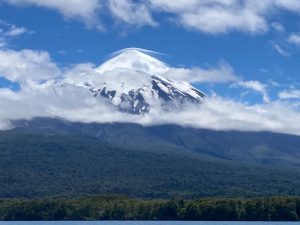 With only a short ride up to the ski area, I had lots of time to kill the next day. I took my time in the morning, willing my things to dry in the damp and cloudy morning, then heading out to the beach to watch the clouds changing around Osorno. With such high humidity, winds over the mountain generate an impressive amount of cloud and mist, including a lenticular sheath that covers the upper mountain, hiding the crevasses and protruding rocks beneath a uniform white cone. Not wanting to pay for another day at the campground, I packed up my things and my slightly damp tent, then headed out to climb to the ski area with my trailer. 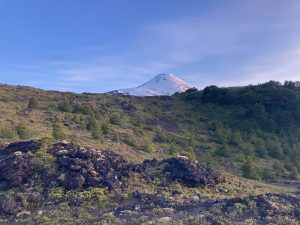 I was soon glad I had not combined this climb with the previous ride. While it might be a good ascent on a normal road bike, it was brutal with a fully-loaded trailer, especially with my not-quite-touring gearing. It was only about ten miles from town, but took me a depressing amount of time. I was fine grinding out most of it in my lowest gear, up to the top of the hairpins, but the final stretch above that, about which the van couple in Entre Lagos had warned me, was too much. It was also unnecessary, as I knew I would not be able to camp at the base, and had seen some discrete spots lower down, but I had time to kill. 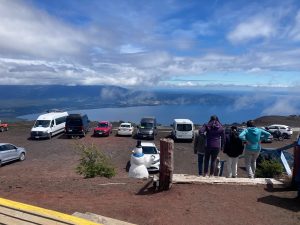 I finally pulled up to the restaurant, parked my bike, and headed up to the cafeteria to reward myself and use their WiFi. Only a couple of minutes after sitting down, a couple came in and sat at the next table, and the guy asked if that was my Bob trailer outside. It turns out that he was another of the world’s few remaining Bob fans (simple, reliable, low center of gravity), so I joined them for awhile. His English was much better than hers, but I learned that he was Swiss, she was Tyrolean (Sudtirol ist nicht Italien!), from Bolzen, and they lived in Bern. They were currently staying in Buenos Aires to study tango, an obsession for them on par with my obsession with peaks.

According to them, the kind of tango you see in competitions is not the authentic tango. Like traditional flamenco, which is communal and deeply embedded in gypsy culture, traditional tango is part of a larger cultural edifice. Tango happens at a kind of salon (I don’t remember the correct word), where men and women come to participate in a highly developed ritual of subtle social cues. One doesn’t simply ask someone to dance; instead, one watches them for awhile, then negotiates interest with a system of glances. The dancing itself is, I think, less showy than the competition version, but more subtle. It seems like an expression of runaway sexual selection not yet divorced from its roots, like the tail of a peacock not yet bred by humans for that trait. It sounds like a highly-evolved version of my least favorite parts of Middle School. 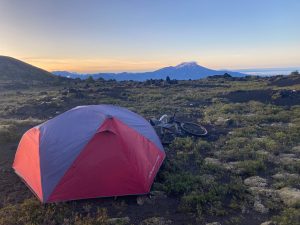 Once they left, I topped up on water, then coasted back down to the highest switchback, where I had seen a social trail leaving the road. I found a flat spot that was mostly out of sight of the road, and definitely a nuisance for a ranger to come bug me, and set up camp. Volcan Calbuco and Lago Llanquihue were still hidden in clouds, but I enjoyed a clear sunset above them as I ate and packed. The next morning I set off reasonably early from my tent, passing the snack shop while it was still closed and the lifts were not yet running. I did not see any “no climbing” signs or CONAF rangers, and was soon out of shouting distance of the buildings. There was a good climbers’ trail up the ridge left of the lifts, making the volcanic debris much less tedious. It was warm enough to hike in a t-shirt, and clearer than the day before, but there was still mist streaming off the summit. 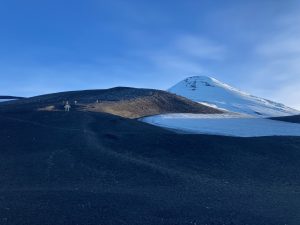 From top of ski area

At the upper lift, I put on my hoodie against the wind, then continued past a sign that warned me about entering dangerous mountaineering terrain. I spotted and soon passed two groups, what seemed to be an independent group of three and a Chilean guide with a single client. The wind got stronger as I climbed, and by the time I finally reached the glacier, it was strong enough that I put on my down jacket and heavy gloves, and hid in the lee of the ridge to put on crampons. I ventured out onto the snow, but it was unpleasantly cold and the summit was now enveloped in a cloud. The Osorno glacier is fairly simple, but I wanted to be able to see at least a bit, and more importantly it was probably too cold for my feet, so I retreated to the rocks for a few minutes. 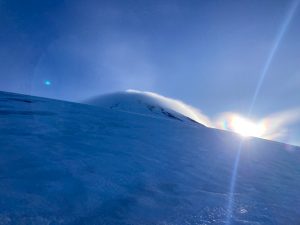 By the time the others reached the top of the rocks, the summit looked to be clearing, so I headed back up. The glacier was partly covered in a thin layer of rain-saturated snow, so it was easier to follow stripes of ice where possible on the ascent. It was cold in the shade, but bearably so, and straightforward most of the way. The final climb onto the summit was steeper, however, forcing me to pick a slightly wandering route and climb facing in, daggering my axe. The summit plateau was clear and sunny by now, making it pleasant despite the steady wind, but the actual summit, a snow fin on its far end, was brutally windy. I stood on it just long enough to get photos of Tronador, Puntiagudo, and Lago Todos los Santos, then turned around to admire Calbuco and Llanquihue on my way down. 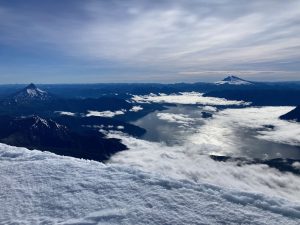 The top part was steep and icy enough to make me downclimb facing in, but not really difficult. Lower down, I hunted out the softer portions rather than the ice, and made pretty good time once I reached the sun and the angle eased. I passed the group of three at a distance, as they had chosen a line well to climber’s left of mine. I put away my ice gear, then passed the guide and client down on the dirt, descending after apparently being put off by the wind. I still do not have the timing down for climbing these volcanoes, but I think a late start may be best: that would let the morning clouds pass, and the snow is consolidated enough not to be miserable in the afternoon.

Back at camp, I packed up and exercised my forearms pumping the brakes back to Ensenada. Not wanting to pay another $15 for mediocre camping, I kept riding along the south shore of Llanquihue, heading for either Puerto Varas or Puerto Montt. With time to ride and think, I changed my mind and decided to ride straight for the Calbuco trailhead, on its southwest side. The next day was supposed to have the best weather, and I had plenty of energy and daylight. The secondary roads were unfortunately a bit more dirt than I had hoped, and my map was out-of-date about one road being privado, cerrado (this is Chile), but I found a minimercado to top up supplies, and a nice place to camp next to a stream short of the trailhead. I reloaded my pack, ate my glop, and went to sleep next to some giant savage-looking plants.

From top of ski area

You’re on your own