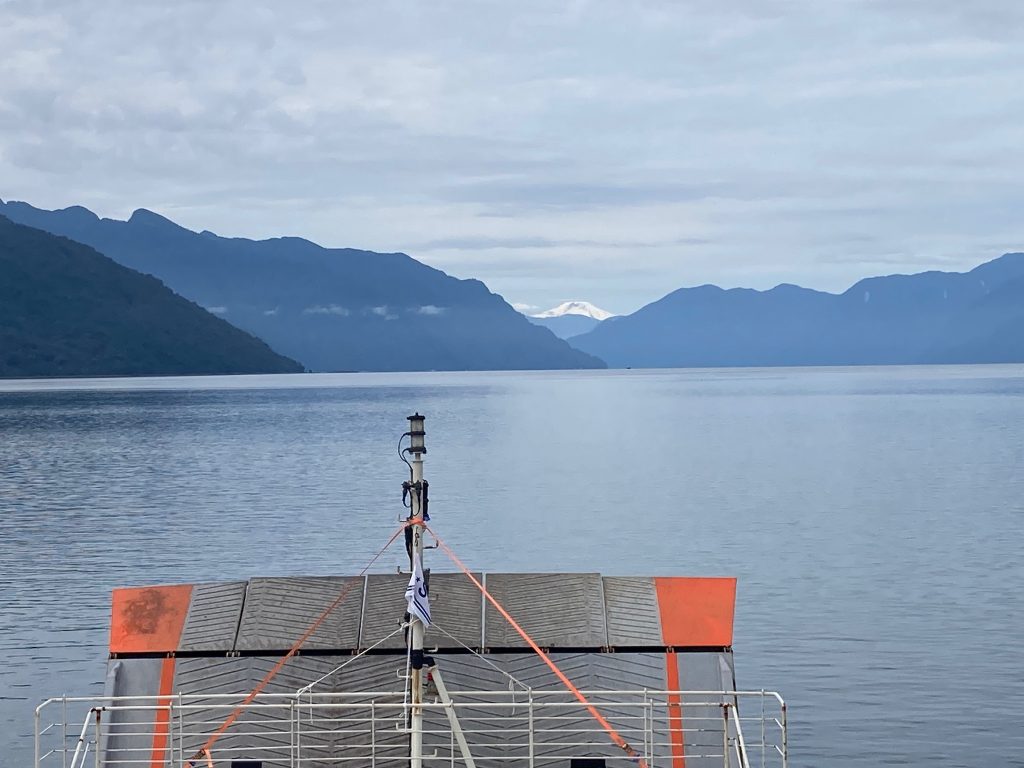 [This is out of order, but written while fresh. Previous climbs will not be neglected. — ed.]

Volcan Michinmahuida is a broad, glaciated dome northeast of Chaiten, clearly visible from the ferry south from Hornopiren. My (outdated) Andes climbing guide describes it as not hard, but requiring multiple days and horses to deal with deep mud on the approach trail. This had led me to dismiss it, but a bike tour guide mentioned the approach as a hike, and the trailhead is signed as a challenging outing for ordinary tourists, so I decided to give it a shot. It turned out to be a full-value experience, with a trek through a rainforest on a somewhat overgrown trail, then some post-glacial debris, and finally about 3500 vertical feet of crevassed glacier leading to the nearly flat summit plateau. I had hoped for views of its more precipitous neighbors, but the upper peak was intermittently covered in mist and cloud, so I only had a few brief glimpses. 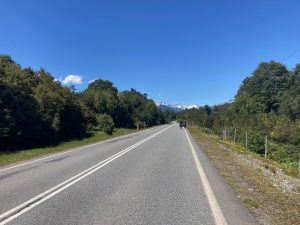 While the Carratera Austral technically begins at Puerto Montt, it really gets Patagonian at Hornopiren. There the Chileans gave up on settling the land and building roads, so all southbound travelers must take a ferry, at the south end of which the well-paved Carratera turns to dirt. I had admired the peaks east of this ferry while approaching town, including one tantalizingly named “Pico Inexplorado,” but could find no information on how to reach them, much less climb them. They looked jagged but manageable up high, but the steep, dense forests below would be nearly impenetrable. 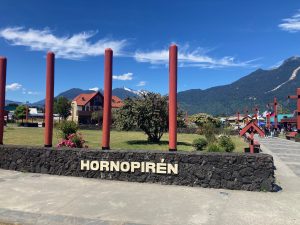 The Carratera is well-known among bike tourists, with companies renting complete touring setups, and one local company offering guided rides with van support. I began passing other riders soon after joining Route 7 from the side-road to Calbuco. The first were a French couple, whom I met before the first ferry. This one makes a short hop across a fjord to join the other road south from Puerto Varas, costs only a few dollars, and runs regularly. I floated to the other side, then continued on good pavement around a peninsula to Hornopiren, a port at the dual deltas of some Rios Blanco and Negro (of which there are many). I passed some other cyclists along the way, including one large van-supported group. 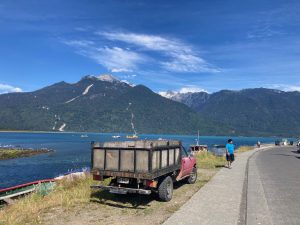 No one climbs those

Stopping in at the tourist office for WiFi, I learned that the ferry south from Hornopiren ran only twice a day, at 10:00 AM and 6:00 PM. It was only mid-afternoon, so I was tempted to take the evening ferry and camp for free on the other side, but I (wisely in retrospect) decided to enjoy an evening of civilization. The town has many campgrounds, and they all seemed to be filling with cyclists. I almost stayed at one with nice spots along the river, but it required me to portage my bike and trailer down some awkward steps, so I went elsewhere, eventually ending up essentially in someone’s backyard (“Camping Doña Marina?”). The owner was friendly, the showers were hot, and for some reason it only cost about $5, the first campground this trip that I felt was a good deal. 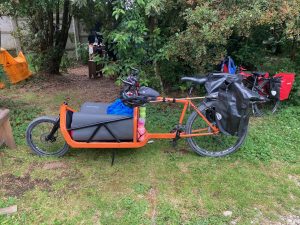 This guy is a legend

Bike tourists are like ladybugs: one is interesting, a few are harmless, and a swarm is overwhelming. There were perhaps a dozen in the campground with me, and while I would have been happy to spend the evening learning any one of their stories, dealing with them all at once was too much, especially after four weeks more or less by myself. The most interesting were an entire Chilean family on a range of bikes, with one of them riding a cargo bike with panniers. I am more used to meeting people with fancy bike-packing setups, so it was inspiring to see someone going for it with entirely sensible but far from ideal equipment. 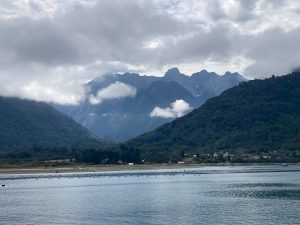 The next morning I had a leisurely breakfast, then rolled over to the slipway to line up with the others. There seemed to be some local traffic, but most waiting to board were tourists: people in vans with spare tires strapped to their roofs, soft middle-aged men on motorcycles, and mostly younger people with bikes, a few of the women taking boat-selfies. The twenty or more cyclists boarded first, stacking our bikes in one corner, then heading up to the deck to take in the view, or the cabin to rest in rows of seats. The ferry takes several hours, so I slept for some, but was mostly awake and on deck. The coast here rises steeply from the water, vegetated from the high tide line to around 3-4,000 feet. It is split by a few fjords, up which one can see sharp, glaciated, inaccessible peaks. I spoke with one of the bike tour guides for awhile, and also with a pair of men driving down to meet family in Coyhaique, the main city in Chilean Patagonia. It seems to be about halfway between Puerto Montt and Villa O’Higgins, a convenient place for me to refit and resupply items not available in small towns. 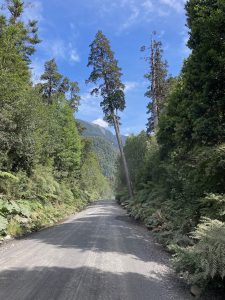 The ferry involves two boat rides, separated by a short dirt road across a peninsula. I was worried that I would not be fast enough to make the second boat, but with so many cyclists on board, the company was apparently willing to wait for them. This was probably not necessary, as the road is short and easy, and loading and unloading are slow. I talked to another of the guides for awhile at the final slipway, to let the dusty vehicles go ahead, then started along the sometimes rough and loose dirt road. The supported cyclists, on their unloaded bikes, easily kept pace with me, but I slowly left them as they stopped to take photos or go on short hikes. I had originally planned to join them at the Los Volcanes campground, but I saw a good tent spot at the Michinmahuida trailhead, and was tired of traveling in a crowd. I set up camp, cooked dinner with some silty water, then fell asleep listening to podcasts, anxious about the next day’s climb. 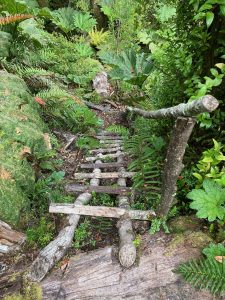 I started up the trail around 7:00 the next morning. With sunrise at 6:30 and sunset at 9:30 this was still fairly early, and I did not think starting earlier would be necessary or helpful for better snow conditions on the glacier. The forest trail started out flat and not brushy, and I was feeling energetic enough to jog a fair bit. As on Calbuco, I found some labor-intensive trail work, including stairs with railings. Though there was also some modern flagging and more recent brush-trimming, none of the work was new, and it made me wonder if there was a period of active trail-building for some reason in Chile. Italy’s Fascist building spree of the 1930s left a legacy of roads and mountain huts. Did Chile’s government encourage outdoor activity or andinismo at some point? Sadly, my knowledge of Chilean history is not much deeper than “sorry about Pinochet, we’re not all Milton Friedman disciples.” 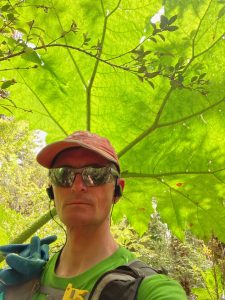 The trail remained easy to follow — there do not seem to be large animals to create game trails here, and the forest is impenetrable — but got progressively more overgrown. I was at first ginger about pushing past Devil’s Club’s big brother, but I had seen a guy carrying two big stalks of it bare-handed the day before, and eventually decided that while it may be spiky and threatening-looking, it is actually harmless. In addition to the flagging, old signs with arrows at several points kept me on the right path. 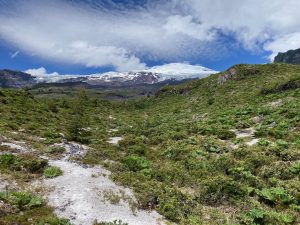 The trail eventually ended in an open area below treeline, cleared by either landslides or the retreating glacier. I followed occasional cairns and bits of trail a bit farther, then aimed up and left for the most likely-looking place to mount the glacier. I crossed a few outflow streams, low in the morning, and found a welcome source of non-silty water. The spot I had chosen was well above the glacier’s badly-broken tongue, but it was still fairly crevassed, so I had to do some wandering and backtracking to reach the main, snow-covered section. This too had some long, large crevasses, but I avoided most of them by following a gentle depression leading up near the center to just left of the apparent summit. 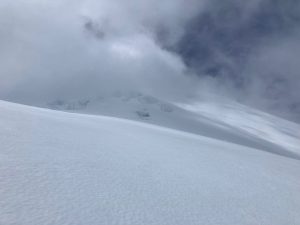 There had been high clouds all morning, but the summit had been clear. Unfortunately as I approached it, it began warming enough to generate its own mist and clouds, which made it intermittently impossible to choose a route. Fortunately the mist lifted from time to time, often enough to pick out the next part of the route. The snow had been nicely supportive most of the way, but became ankle- to calf-deep slush in the last thousand feet. I suppose I could have avoided this with a very early start or a bivouac at the toe of the glacier, but simply dealing with the slush was preferable, as it was not about to avalanche. It was, however, unpleasantly cold for my feet — I need to find some better plastic bags. 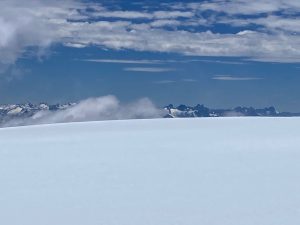 The clouds became more continuous as I neared the summit, eventually reaching what I thought was a crater. Looking at my map, I realized the summit was several hundred yards on the other side, and when the clouds briefly parted, I saw that it was just a huge, long crevasse. I explored to the left, finding nothing I liked, then found a crossing to the right. From there I trudged across a nearly-flat icefield toward the red dot on my map. Another break in the clouds let me see that I seemed to be at the highest point of the plateau, so I called it good and immediately turned around. My footprints were easy to follow in the slush, and I had been recording a track, but my feet were cold, and I did not want to hang around and look at nothing. Another brief break in the clouds showed me an impressive range of jagged peaks to the east, but I had timed it wrong to enjoy the summit view. 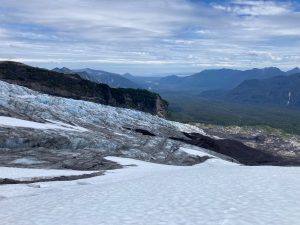 I mostly just followed my footprints on the way down, occasionally pulling out the GPS track when they were unclear, so the descent was quick and mindless. I stashed my axe and crampons, then stumbled down the loose debris on tired legs, pausing at the clear stream for another drink on my way to the trail. I had expected to meet someone else on the trail, as it was a nice weekend day, but did not expect to see a middle-aged woman and her son only a mile or so from the end of the trail. They were both wearing shorts, so they suffered badly from the biting flies when they briefly stopped to talk. I was impressed that they had made it so far, and were not looking more beaten down and torn up from their bare-legged jungle thrash. Maybe Chileans are more used to working for their outdoor fun than we Americans. In any case, I was too tired to do any running on the way back. I stopped at a clear stream for as much water as I could drink and carry, then returned to my tent for another night at the trailhead. The developed campground was only a mile or two away, and supposedly free, but it did not seem worth the effort to pack up and move in a cloud of flies.

No one climbs those

This guy is a legend

Bike-herd on the big ferry

Glacier from end of trail