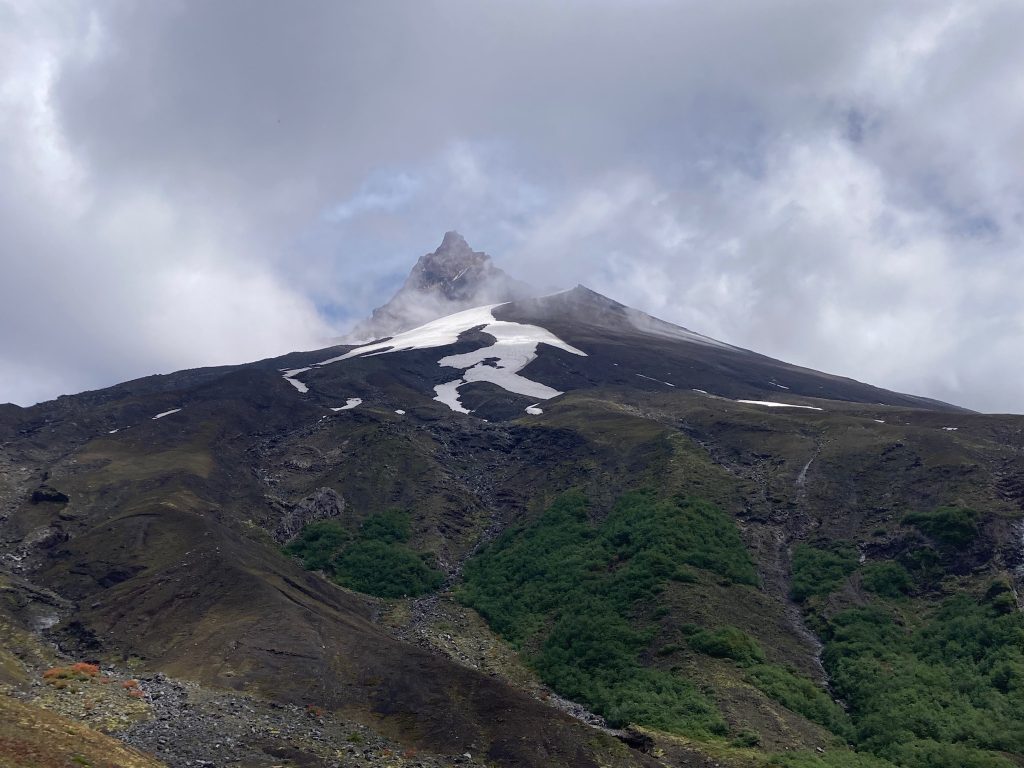 Brief view of the peak

Volcan Puntiagudo, a sharply eroded volcano like Mount Thielsen in Oregon, is supposedly the hardest volcano and one of the hardest peaks in the Los Rios region of Chile. From what little information I could find about climbing it — Biggar’s book basically says “that looks hard,” and andeshandbook.org has a few photos and a GPS track — I knew that it was normally done in the Spring, when snow and ice likely covered its rotten rock. It was therefore a long shot for me, but a prominent and attractive enough peak to demand my attention and two days of “precious” time. Had I followed my original plan and bused to Osorno, it would have been my first objective. 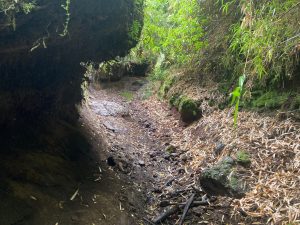 I woke early, as this would be my biggest day so far in the trip, and I wanted to hop the fence before anyone was likely to see me on the surprisingly busy dead-end road south of Lago Rupanco. Just out of sight of the road, I found a large open shelter for horses or tents, and some more signage about the sendero and its flora and fauna. Contrary to CONAF’s current policy of closing and abandoning everything, there seems to have been a period when they built trails and encouraged access to and enjoyment of the outdoors. This seems similar to the progression of the United States Forest Service, which went from a can-do agency building trails and roads (and suppressing a lot of fires…) to an underfunded sad-sack bureaucracy unable to maintain what it once created. 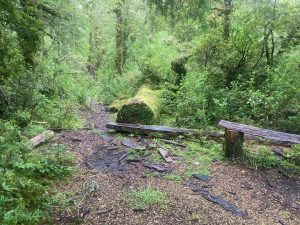 The first part of the route is a confusing maze of old tracks and cow-paths through land of unclear ownership. I followed my GPS track for awhile, then deviated to continue along what seemed like the main path. The land was incredibly lush, and the paths were so eroded as to become almost tunnels, head-deep or more with vertical or overhanging banks and greenery closing in above to harvest every photon. Thankfully it was relatively dry, because otherwise I would have been walking in streams. My GPS track noted a house along the way, but I ended up at a different one, apparently uninhabited but with a cow grazing outside. Worried about angering an armed farmer, I hurried by quietly, finding a couple fences with wire gates I had to either climb or close after me. The maze continued, with the main path seemingly leading me farther from the GPS line, so I eventually started taking less-used branches back right to return to the known-good path. I eventually rejoined it with a final thrash, to find it no more used than the one I had followed. 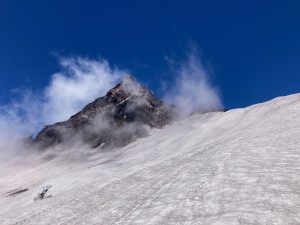 Back on the Sendero Puntiagudo, I passed a camping area with some mossy benches, occasional flagging, and some boards and logs bridging boggy sections of the trench. After climbing steadily, the trail made a long horizontal traverse east, then climbed again to emerge from the trees at the base of an old mudslide. From there it nearly disappeared with only occasional cairns, bits of wear, and an ominous wooden cross. However I had the track to follow, and therefore had no problem choosing the correct route through the rocks, up a branching ravine, then out of it via a loose slope to a sandy shoulder. It was too cloudy to see the peak or much of my surroundings, but the route was clear from here: up the broad ridge to the glacier, up and right across the glacier to the right-hand base of the summit pyramid, then… whatever I could figure out. 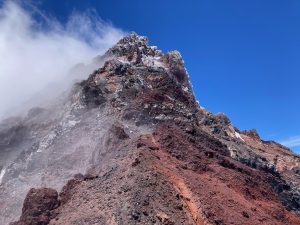 I reached the summit rock at a sort of west ridge, where I put away my crampons and axe to follow the crest, where the rubble was least mobile. I soon found that, however bad the north side was, the south was even steeper and looser. Eventually stymied by an impossibly narrow dirt-crest, I carefully crab-walked back down to the glacier (push in, not down), hacked steps across with my axe, and rejoined the ridge where it broadened again. Steeper rock is generally more stable, as it would otherwise have already fallen, so I hoped that enough of Puntiagudo’s summit would be like Thielsen’s relatively solid stuff. Unfortunately Puntiagudo’s spire is much larger, and while there are some intrusions of solid rock, most of it is rubble held together by sheer stubbornness. 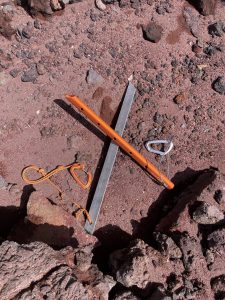 I picked my way up the west side, sometimes staying on a more solid crest, sometimes finding ways to chimney through short cliff bands. The hardest part came when I went well left of the direct line to the summit, traversing into a small gully and climbing 5.6-ish rock onto a somewhat-solid rib to get around a cliff. This was about as hard as I wanted to climb on an exploratory outing, and combined with the clouds obscuring my view and the rime above, it made me start to question my chances. I found a half-dozen snow pickets along the way, mostly the usual aluminum T- or L-shaped ones, but one that looked like an ice-axe handle. I also saw a cut-up old rope dangling down a terrible loose cliff on the southwest side. Presumably (guided?) parties rappel the route and leave their pickets behind, and based on the number, it seems like the peak is not infrequently climbed. However little information about this andinismo makes it to gringolandia. 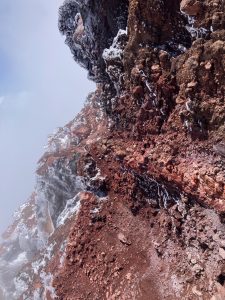 A final vertical-to-overhanging band of harder rock was still partly covered in rime, which was falling off and shattering as the sun burned through the morning clouds. It was too steep to climb directly or to the south, but my GPS track suggested that the route wrapped around to the left. A low-resolution track with ground bounces is at best a suggestion, but this seemed likely, as the upper left-hand skyline looked less steep from below. I crossed a loose and icy bowl, reached a shoulder with another picket, then eyed an exposed traverse. I kicked steps across the initial steep dirt, then paused at a sketchy-looking boulder beneath a bulge. It looked like things might get slightly easier on the other side, but there were no handholds above, and doing a reverse beached whale over the boulder with death-exposure below was more than I wanted to chance. I debated for a minute as bits of ice fell past me, then retreated, defeated, to where I had found the last picket to have a sandwich. 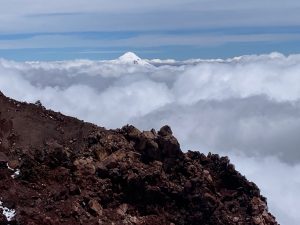 Puntiagudo was not to be mine, so I mentally justified the two days used by trying to enjoy the views of Volcan Osorno peeking above the clouds, and the feeling of wilderness and adventure that had been absent on my trip so far. Then I cautiously picked my way back down the summit cone, diligently following my track and taking an extra minute on the crux downclimb. I got on the glacier sooner, this time with crampons, and after a quick inward-facing downclimb of an icy stretch to get out of debris range of the summit, it was smooth going back to the trailhead. Since I had a dry camp, I stopped at the benches to fill up at a stream. I decided to follow the GPS track this time, and while I avoided the first house, I had to pass right by another, which at last looked more abandoned. I also found that the track led right through a field full of Chilean super-burrs, which coated my lower pant legs and shoelaces. Reaching the trailhead, I listened for cars, then quickly dashed across the road and back to my tent. As usual, my things were unmolested, so I crawled back into the safety of my bug netting to lie down for awhile before thinking about the difficult question of which of my one options to have for dinner. Tuna in oil with semola, more oil, and a half-cube of bouillon.

Tomb of the unknown mountaineer

Brief view of the peak