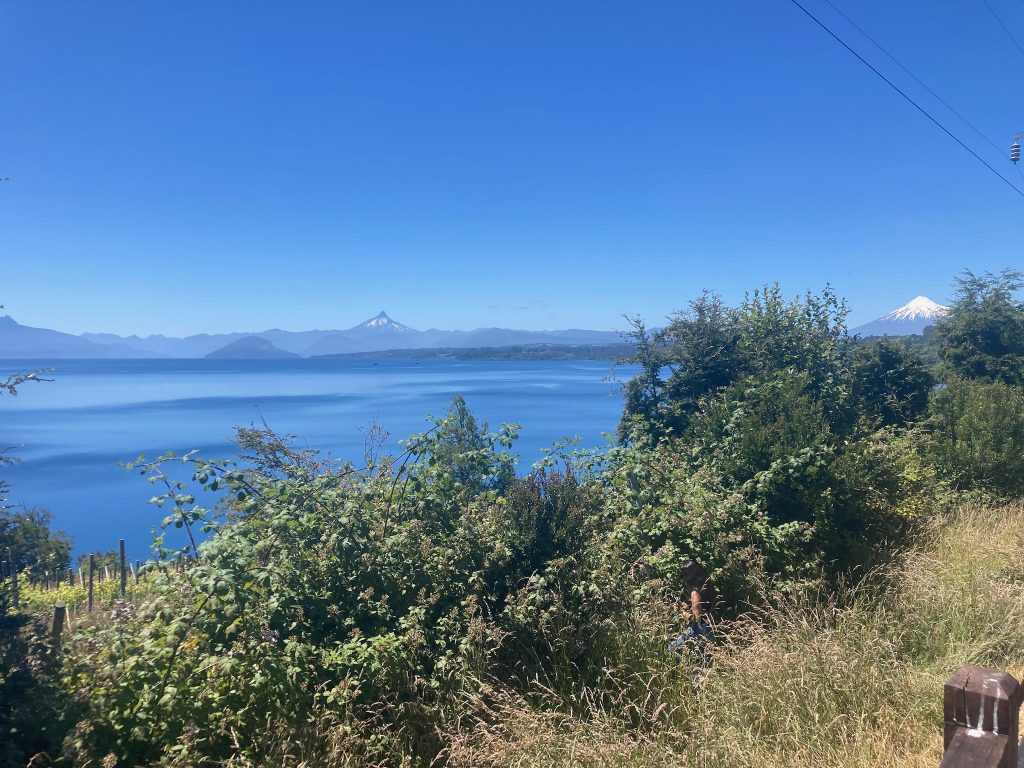 I had some latitude to cover south of Melipeuco, but unfortunately the secondary roads in this part of Chile do not run directly north-south. I started by heading southwest, passing Lagos Colico and Huilipilun, before cutting straight south on a mixed-dirt road to Villarrica, where I joined my route from last time. Then I had been returning from Argentina, climbing Volcanes Lanin and Villarrica along the way, grateful to be back on pavement after some brutal ripio along the Argentine side. This time I was focused on making time to the south while dodging lakes. 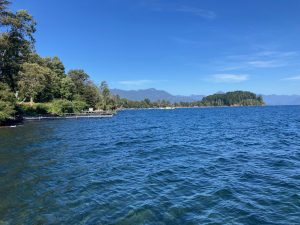 The campground I chose along Lago Calafquen was run by a German couple who had apparently gone to ground here during COVID and bought the place. It was blessedly well-kept and quiet, with hot water, power, and access to the lakeshore. The lake is around fifteen miles long, large enough to have a bit of an ocean feel, though one can always see the other side. The campground also had power, something I badly needed, so I tried to make every hour count by plugging in my things until the last minute. Unfortunately I was careless, leaving my plug adapter and phone cable behind, something I did not notice until that evening some 80 miles away. 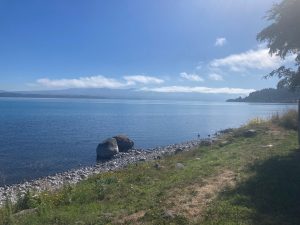 I diverged from last tour’s route at Lago Panguipulli, where I had headed back to Argentina, heading south and west again to get around it and Lago Rinihue. I planned to camp along Lago Ranco, one of the region’s two largest lakes and a popular Chilean tourist destination. I pulled into a lakeside campground, and the guy at the entrance lowered the chain and told me to head to the reception to pay. While wandering around looking for it, I happened to see a bike-touring couple setting up camp, and went over to greet them. They told me that the normal price for a campsite was an absurd $60, which they had talked down to “only” $30. Ugh — American prices for mediocre services. Their site was large, so I paid them $10 to share it rather than dealing with the greedy campground hosts. 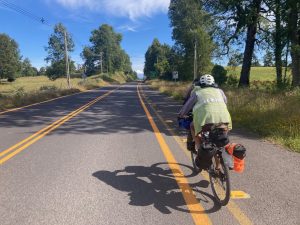 They turned out to be a retired couple from New Zealand, drifting through some unstructured limbo between retirement and pension. They were already well-traveled, having previously toured in South America and the Middle East, but were now full-time, planning to spend the Austral summer down here before heading somewhere in North America. I respect and enjoy the company of such “lifers,” as they always have interesting stories and motives. I am a comparative dilettante, though, and cannot imagine making touring sustainable for years. While it is sustainable and enjoyable for a season, the accumulated wear and tear of a year or more living on a bike still seems like too much for me.

We went our separate ways in the morning, as I badly needed to replace my lost electrical things. The nearest large town was Futrono, but it was 5-6 miles backwards, so I instead continued to the town of Lago Ranco, forwards and only a couple of miles out of the way. Back in the States, the obvious place to get random cables and adapters is Amazon, but that is not a thing down here, especially for someone like me with no fixed address. Fortunately South America has its own solution. These days Amazon is basically a confusing emporium of cheap Chinese crap on the internet; Chile instead has the “Chino,” a cash-only brick-and-mortar store full of the same crap and run by actual Chinese people. I tracked down Lago Ranco’s Chino, found the necessary cables and adapters, tested them out before buying (a simultaneously depressing and admirable part of the shopping experience here), and was back to having sufficient power to function. 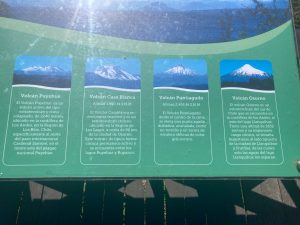 I continued riding south to Entre Lagos, on the western tip of Lago Puyehue, unwarranted stress relieved. Stopping at a bus shelter to have a snack, I was surprised and pleased to see the friendly Kiwis pull up only a couple minutes later. They were headed to the same place, so we caravoned into town, then found a campsite by the lake. There were several other bike tourists there, including a Chilean father and son, and a large group of Argentinians, one of whom had broken his derailleur hanger (ouch!). We spoke a bit with the Chileans, and ended up sharing grilled meats with them. The father worked for Arauco, the timber company whose name I had seen on my tour of Chilean tree farm country. We also spoke to an American/Dutch couple touring by van; the American woman had just finished a PhD in sustainable transport, about which I would have been interested to hear more. 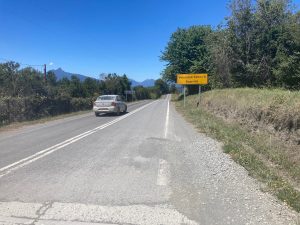 I left the Kiwis here for the last time, heading south to Lago Rupanco, then around its south side on sometimes frustrating and always dusty gravel. It was looking like a long day, but I discovered a mysterious stretch of pavement in the middle, unconnected to any other paved road. I could not figure out how it had come to be, other than perhaps in connection with a rural school. I was aiming for the trailhead for Volcan Puntiagudo, which I found thanks in part to a track I had downloaded, and in part thanks to a sign telling me that the trail was closed unless I was with a guide (of course…). I camped at a conveniently hidden abandoned spur on the other side of the road, setting up my quickly to escape the giant biting flies, then prepared for the next day once they went to sleep in the evening.