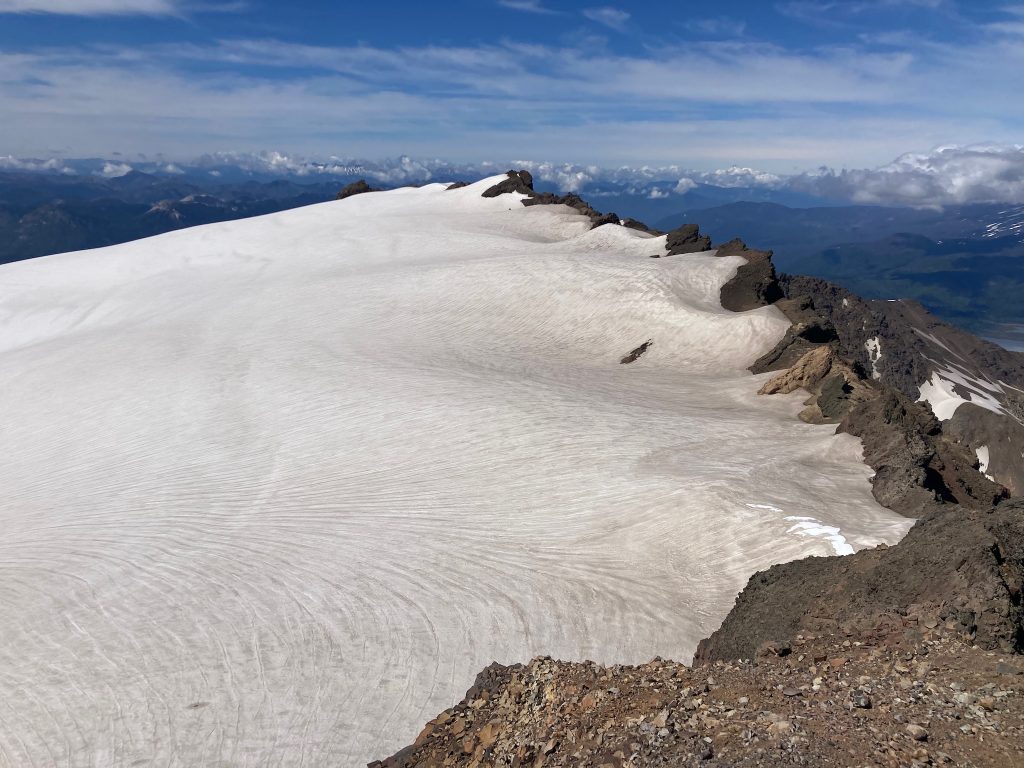 Sierra Nevada is a long north-south ridge between Lago Conguillio and Malalcahuello, volcanic in origin but with no obvious crater. It is overshadowed by its taller and more symmetric neighbor Llaima, and has less than 5000 feet of prominence, but since it had taken some effort to reach the area by bike, and I would likely never return, it made sense to tag it as a bonus peak on my way by. It turned out to exceed expectations, with surprisingly large glaciers on its east side. Though it is only 38 degrees south, this side reminded me of Challenger Peak in the North Cascades, which is almost ten degrees farther from the equator. The approach is also pleasant, following a well-maintained trail through bamboo and araucaria forest to treeline. I was probably supposed to get permission and/or hire a guide, but the signage was unclear, and in any case the rangers rarely leave their trucks. 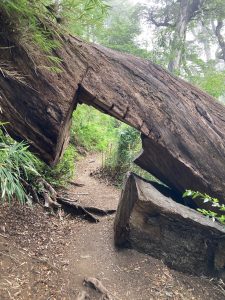 I packed up and rolled out of the campground early, riding over to the trailhead and locking my bike out of sight of the road before starting up the trail. I later found out that the trail is a reasonably popular Strava segment, but I did not know it at the time, so I felt no pressure to hurry. It was cloudy, so I did not stop at the three miradores to look at Lago Conguillio, condors, and the mountain I was planning to climb. The trail generally ascends a forested ridge to where it intersects the mountain at a snowy bowl. As the trees become sparser, one can see a steep headwall to the right, with bits of greenery and multiple cascades from the snowfields above. 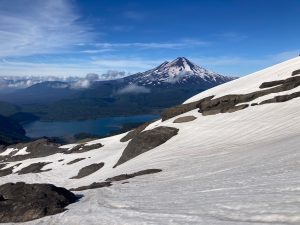 No footprints went far on the snow, so I was soon left to my own judgment picking my way up the bowl. I had brought crampons, which I soon donned, but left my ice axe in the trailer, so I had to choose my line judiciously. The snow had been wind-sculpted into “dunes,” whose steep sides I had to avoid. I generally followed the left side, staying on snow rather than the friable rock except for one short stretch of low-angle ridge. I eventually curved around to the right, taking off my crampons to scrabble over a small dirt ridge to the first of the two eastern glaciers. Both of these glaciers are bounded to the west by Sierra Nevada’s chossy ridge, and are mostly flat, with a few crevasses barely visible where they flow toward the valley to the west. 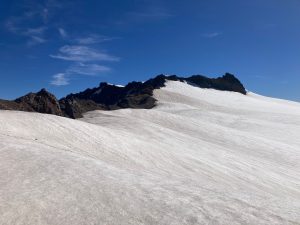 I made my way across the first glacier, staying too close to the rocky ridge and thus having to cross the snow-ridges formed in the lee of its undulations. The ridge separating the lower and upper glaciers looked intimidatingly steep and loose, but a chute to the left looked passable. I negotiated a partially-open bergschrund, then front-pointed delicately up some snow and ice, grabbing the more solid-looking rocks on the side, until I reached rock, dirt, and the crest. I could not yet see the summit, but my map told me it was still a good ways away. 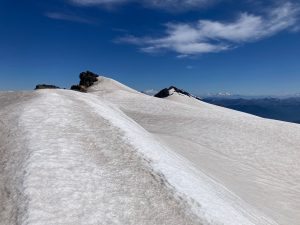 The upper glacier is much like the lower, with ridges behind the sub-summits and a flatter plain to the east. I picked what seemed like the most efficient line, and eventually the highpoint emerged from behind the lesser points. Its south face had a hanging, disintegrating snowfield that was too steep for my gear, and the rock was too rotten to climb directly, but it seemed like the right side had a more manageable angle. Turning it on that side, I found moderate snow leading to a point on the ridge just behind the summit. I took off my crampons and followed bits of trail along the ridge to the cairn on top. Interestingly, there were tracks in the snow coming from the north. The trailhead sign had mentioned a traverse connecting the lake to Malalcahuello, and perhaps the northern half is a more popular ascent route, but it is not discussed in gringolandia. 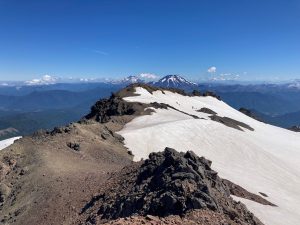 The clouds had almost completely disappeared, so I enjoyed views of Llaima, Lonquimay, and the other volcanoes, all taller but less glaciated. I had plenty of time but not much food, so I relaxed for a bit, then descended at a stately pace. The snow had softened enough to make the lower snowfield easier, as I could plunge-step down some of the steeper parts. I saw one person at the trail’s end, and many more on the rest of my way down. I did not stop at the viewpoints, as I had climbed the peak, seen a condor above the upper glacier, and had better views of the lake. I was amazed to find the parking lot overflowing for what seemed like an obscure trail that started along a dirt road and dead-ended partway up a peak. 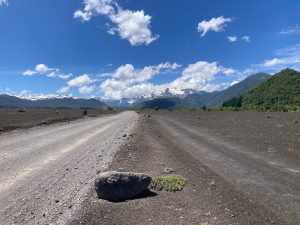 I changed into my lycra, then prepared for the ridge to Melipeuco by drinking a couple swallows of olive oil (my only remaining calories). The road out was better than the road in, and it was also downhill, but the headwind had returned, and it was still rough and washboarded. Both myself and the other drivers tended to use the middle of the road, but we were slow and aware enough to avoid any close calls. I felt the old South American joy of reaching pavement again after a couple days of dirt, and flew the last few miles to town. There were signs around town that seemed to advertise a mountain bike race, but I could not figure out when it had happened or would occur, though I saw at least one fancy bike at the campground (a full-suspension Santa Cruz). Melipeuco seems to be at least an aspirational tourist town, with a large visitor center and a museum, though I found it inexplicable why it was more of a destination than Malalcahuello to its north. Maybe it’s easier to spell?

This place is damp