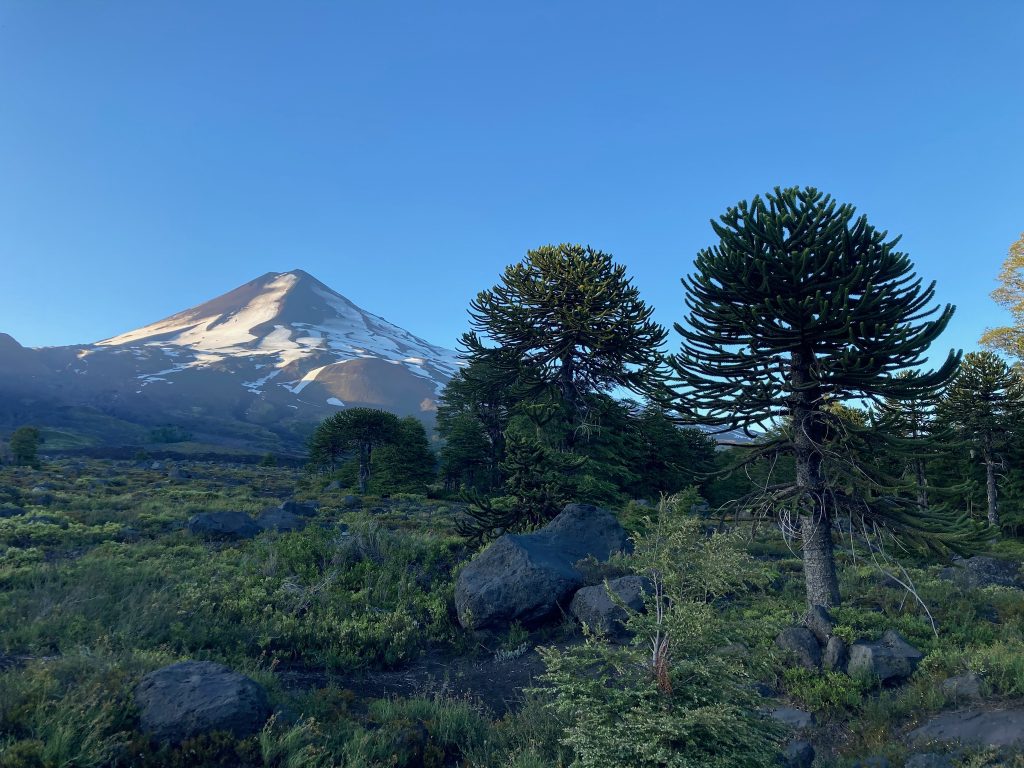 Volcan Llaima is Lonquimay’s prominent and more symmetric neighbor to the south, still in the araucaria region. While it is normally climbed from the ski area on its west side, it can also be climbed from the north (or pretty much any side, as it is a symmetric cone), from a road leading through Conguillio National Park between Curacautin and Melipeuco. Not only is this shorter than going around, but it is scenic and grants access to neighboring Sierra Nevada. Unfortunately a significant part of the road is washboarded and loose volcanic sand and gravel, which is tough to ride, and the park charges foreigners $13 for the privilege of passing through. Worse, you cannot pay the entry fee at the guard station, but must buy a pass online before you visit (there is no cell service at the station). Fortunately the campground lady warned me of this unfortunate situation, saving me something between frustration and defeat. 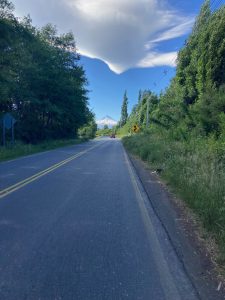 The road out of Curacautin starts out as good pavement, climbing south and east toward Llaima. I made good time despite an intermittent headwind, and my good mood was only briefly spoiled by a ridiculous sign saying that I was entering Mapuche lands, and therefore could not take photos. (I doubt the Mapuche have grazing, mining, or timber rights, or even an American-style monopoly on casino gambling, but hey, at least they could have run a postcard business 20 years ago…) The road turns rugged almost as soon as it turns to gravel, a few miles before the entrance station. I was riding in on Christmas Day, but there were still a handful of other visitors, driving everything from beefy Hiluxes to compacts with wimpy 14-inch rims. Even these have much more volume and contact area than a bike tire, but I am continually impressed by how much people are willing to punish their cars here. 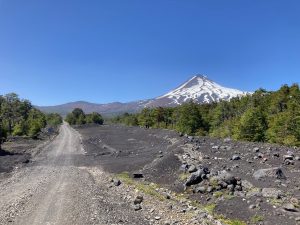 I showed the guards the QR code on my phone, signed in to the log book, and was painlessly on my way. There had been other signs saying that those climbing Llaima should jump through more administrative hoops, but my crampons and ice axe were in the bottom of my trailer, and a lycra-clad gringo seemed unlikely to do something as stupid as climb a volcano sin permiso. The road continued to be mostly rideable, but that ended at a stretch of open volcanic wasteland. Between the uphill grade, washboard, loose surface, and a stiff headwind, I was soon mostly pushing my bike at a pathetic speed. 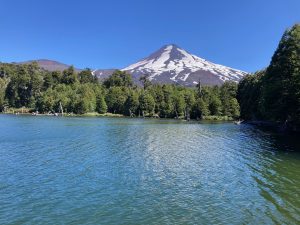 The road became rideable again as it entered a mixed araucaria forest, so I ground out a few more miles in my lowest gear, promising myself lunch at the old Laguna Captren ranger cabin, where the route to Llaima starts. The cabin was not manned, but it had both picnic tables and a spigot out back, so I passed a pleasant afternoon there. I eventually retreated a short distance down the road to an old campsite, where I set up my tent within sight but outside driving range of the road. As it turns out, I should have been stealthier, but no one pestered me that night. 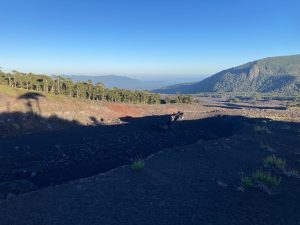 Wrong side of the lahar

I woke at first light as usual, and was moving by 7:00, hiking back to the guard station and following the signed trail toward the peak. This side of the mountain is split by a deep, steep-sided lahar, and the correct summit route crosses to its right side before the sides become impassable. I unfortunately followed the trail on the left until I was committed to that side before realizing my error. Rather than backtrack, I continued until I could cross one branch with a bit of scrambling, then postholed up some incredibly loose and powdery dirt until I could get on snow. 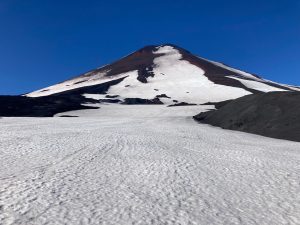 The snow was perfect for walking, solid underneath but just soft enough on top that I did not need crampons on the lower slopes. I eventually put on crampons as the slope steepened, and truly needed them on the upper slopes. Thanks to foreshortening, Llaima does not look that big from any point, but it is 4 miles and 6000 feet of gain from the road, and this took every bit as long as one would expect. Partway up, I saw a group of five climbing the dirt to the right of my snowfield, making very little progress. In fact, I could not tell if they were going up or down. 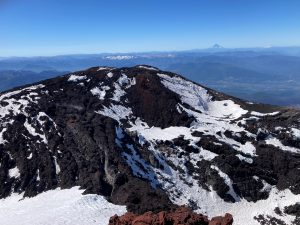 From the trailhead, I had picked out a snowy line to nearly the top, and it worked as well as I had hoped. I finally stashed crampons at the highest snow tongue, then carefully picked my way up some truly miserable terrain to the summit. When not covered with snow, the upper mountain is a mix of powdery sand and fresh, sharp rock, and it is difficult to predict which parts are stable and which will collapse. Just below the summit, I passed several active vents, though I did not smell them. Fortunately I emerged on the high side of the crater rim, as traversing from the lower south side would have been tedious. Llaima last erupted in 2008 (I think), and you can still see fresh waves of solidified lava south of the highpoint. Farther south, I could see Lanin and Villarrica again, with possibly El Mocho peeking out behind the latter. Osorno and Tronador are unfortunately still much too far south. 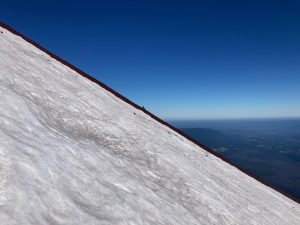 Non-gringos on the dirt

I started down a faint trail on the ridge, going just far enough to remind myself that snow is always the best option on volcanoes. I made my way to the nearest edge, then carefully side-stepped down in crampons, as the slope was a bit too steep and hard for plunge-stepping. I saw a person below me and, as I got closer, realized that it was the leader of the group I had seen earlier, an older man with a proud white mountain beard. He and his group turned out to be from Pucon, a pleasant town I had visited last time to climb Villarrica. I told him I was from the States, which he referred to as “gringolandia”. That may have a negative connotation, but I like it enough that I may adopt it. 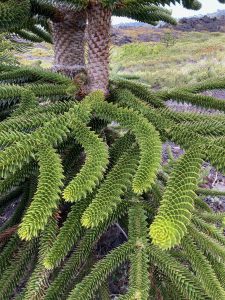 I took the correct side of the lahar on the way down, staying on snow until around 6000 feet, then transitioning almost immediately to compacted volcanic dirt and soon picking up the trail markers. I somehow lost them near the bottom, but I did not mind, as I was able to take a more direct line to my tent. I was running low on snack food, so I cooked some of my dwindling glop supply for a late lunch. Just as I was about to dig in, a red Hilux stopped and a couple of park rangers got out. They politely informed me that I was not allowed to camp there, and would have to continue to Lago Conguillio. To be fair, this is about what I would expect in a park back in the States, but I wish Chile were not so eager to adopt the States’ worst aspects. Even most European countries seem to have a more live-and-let-live approach to camping. 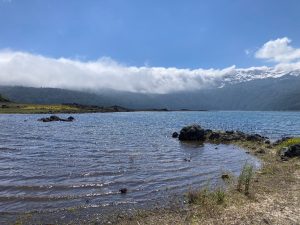 I was planning to move anyways, so I rode past the cabin, pushed my bike up a loose, steep hill, then coasted and rode to one of the campgrounds along Lago Conguillio. It is a spectacular place, in the rain shadow of a low ridge to its west, with snow-clad peaks to the south and more mixed araucaria forest with flowering undergrowth. Not wanting to get tooled again — possibly by the same rangers — I pulled into one of the developed campgrounds. It was less convenient for me, since I would prefer to hike straight from camp, had facilities I did not want or need, and promised neighbors who would likely keep me up late. Sigh… Only another week of this, and then hopefully things will be more relaxed south of Puerto Montt.

These are really weird trees

Wrong side of the lahar

Non-gringos on the dirt