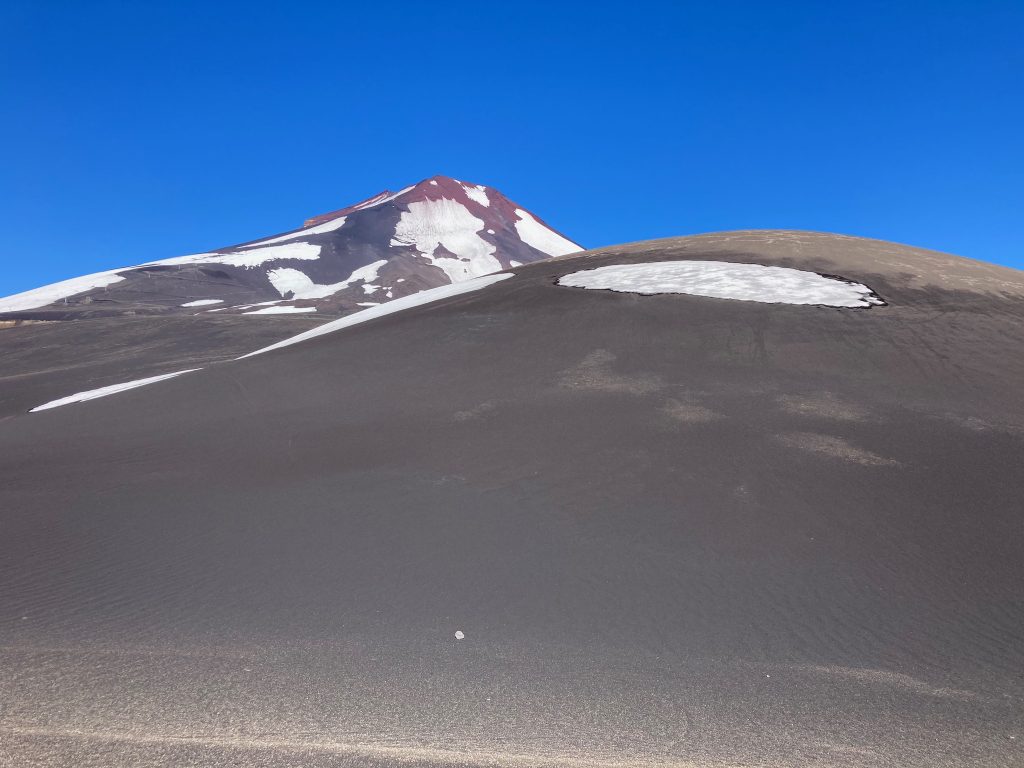 Like Chillan, Volcan Lonquimay is a volcano with a ski area, though the peak is larger and the lift-accessed terrain smaller. It may be reachable from Laguna Blanca to its west, but the most common access points are along the road to its south and east, either from the ski area itself, or from the trailhead for the Crater Navidad, a relatively new volcanic feature. It seems much more popular than Nevado Chillan, with a decent trail beaten into the volcanic debris on the ridge above the highest lift, though like Chillan, it is much better when covered with snow. 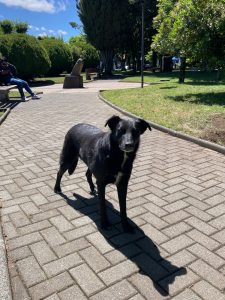 I packed up my damp things at my forest camp, then finished the ride to Curacautin for lunch. This seemed to be a well-equipped town, with at least one large supermarket, many mini-mercados, and reliable cell service, but only one gas station seemed to be open, and there was a line of cars stretching down the block. Being on a bike, it was trivial to avoid this madness, as well as the parking nightmare of people stocking up for Christmas. I bought a few days’ provisions, hung out at the park for awhile, gave the last of my mortadella jamonada to two of the polite park dogs, then continued up-valley to Malalcahuello. This is much less of a town than Curacautin, and it appeared to be mostly shut down for Christmas Eve, with some kind of fair in its modest plaza. 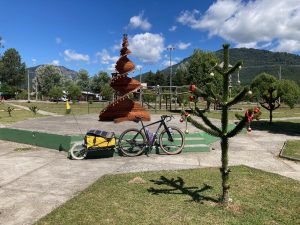 I had time to kill, so I took some photos of the Christmas decorations, looked around half-heartedly for sources of water and electricity, then sat down on a bench to watch the locals. The fair seemed to be either not yet ready or mostly shut down, but two little girls were riding around on bikes. I briefly spoke to the mother of at least one of them, who had worked in Paris and the States before returning to Chile to settle in this tiny village. She remarked that my Spanish sounded a bit French, which I took as a compliment, since I would characterize it as “too bad to have a discernible accent.” It was strange and interesting to find someone so well-traveled in such a seeming backwater, and I would have been interested to know more, but she did not seem too talkative. 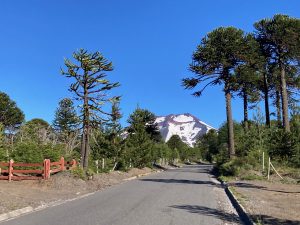 Lonquimay from below ski area

I continued on toward the Lonquimay trailhead, hoping to find a place to camp before I had to climb too much with the trailer. This proved somewhat challenging, as the road toward the ski area is lined with seasonal properties such as snowboard shops and luxury cabin rentals, but I found an abandoned-looking parcel not too far up, where I could pitch my tent a safe distance from the road. There are some cows in the area, but the nearby stream seemed clean. The valley was a bit of a cold sink, so I got a slightly late start in the morning, riding my bike in “fun mode” up to the trailhead. The road was generally good until the intersection leading to the town of Lonquimay, then potholed pavement from there to the ski area. Beyond, it was generally good graded dirt with some sections of washboard and occasional surprise sand. 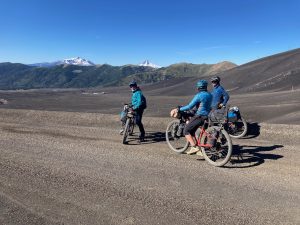 Partway up, I met three bikepackers on their way down, two from New Zealand and one from Ireland. The two New Zealanders were dedicated tourers, having gone from Alaska to near Patagonia pre-COVID, and seemingly done a number of other big tours. (Edit Feb 5, 2023: They are in fact very accomplished bikepackers and professional photographers, who also write a great blog at Highlux Photo.) They had started in Mendoza, and were headed to Ushuaia by mid-April, doing more wandering and less peak-bagging than Yours Truly. I admired their light and optimized setups — essentially bike-packing kit with small racks and panniers — but remain skeptical that I could travel like that without giving up too many of the small luxuries that make bike touring more bearable than long-distance backpacking. Slightly older than me, traveling as a pair, and seemingly more interested in type I fun, their schedule made me more optimistic about the feasibility of my own. When I asked them how they planned to move on from Ushuaia in mid-April, they impressed me by answering that they did not know where they were headed after that. I was finally back in touch with that small hard core of bike tourists like Kevin and Simon, for whom the tour is not a vacation or a quest for micro-fame, but a way of life. 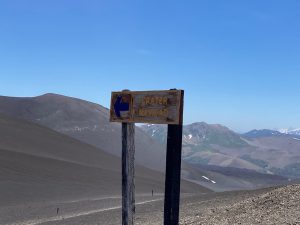 I wanna wish you a crater Christmas

I eventually continued to the Crater Navidad (“I wanna wish you a crater Christmas…”) sign where, unable to quite fit my lock around the post and my frame, I dragged my bike out of sight of the road and locked it to itself. I then took off toward the peak, following some footprints that converged into a sort-of trail. As soon as I could, I got on one of the remaining snow tongues, finding footprints from a day or two ago. The snow was just soft enough to kick cautious steps, so while I had brought crampons, they stayed on my pack. Lonquimay’s sand and rocks are much less miserable than Chillan’s, but the snow was still much better. 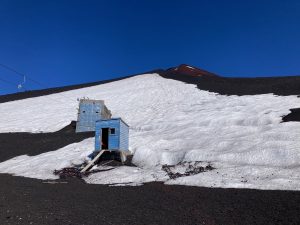 Top of the lifts

Following mostly snow and a bit of service road, I eventually reached the highest lift terminal, from which an obvious trail followed the ridge to the summit. I saw two people far ahead of me, one wearing rescue orange, and while I closed on them, I did not manage to catch them before the summit. I found them there, hiding on the lee side, and they turned out to be a couple of friendly guys from Temuco, out for a long day-trip before the Christmas holiday. They were budding mountaineers, looking forward to larger peaks in the Andes and eventually the Himalaya, so it was fun to talk to them. I mentioned that Chile and Argentina are two of the best countries in the world in terms of geographic and climactic variety (only the States and perhaps China come close), and took their Chilean pride in stride. Yes, Argentina is kind of a basket case… but it’s still awesome! 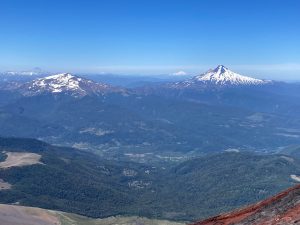 Lonquimay has a great view of its volcanic neighbors, from nearby Tolhuaca, to symmetric Llaima, to Velluda to the north, and Lanin and snowy Villarrica some 90 miles south. Its crater is covered in snow which currently lies a ways below the summit ridge, but it apparently fills in in winter. I eventually bid the guys farewell to hike and slide back to the bike. The first part was unpleasantly rocky and inconsistent, but the snow had softened perfectly for boot-skiing, and the lower sand was just right for plunge-stepping. I reached my bike at an unhurried pace, bombed back to camp, then packed up and returned to Curacautin aided by a wicked tailwind. 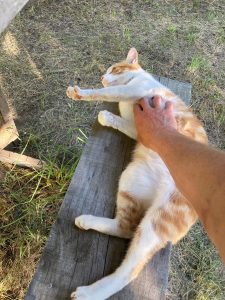 I had time and ground to cover, but felt like stopping early and not having to hunt for gaps in barbed wire. I bought some luxuries at the store, including eggs and discount fruitcake (over 2000 cal/$! I was stoked to watch a woman look at the price and grab 4-5 of them.), then spun out of town to the supposed municipal campground. This actually turned out to be a deserted private campground, and while it was more expensive than I would prefer (10,000 CLP), the woman in charge was pleasant, it was clean, and it had power, hot showers, and multiple friendly cats. I enjoyed a relaxing evening without loud neighbors, falling asleep at the most un-Chilean time of 10:15.

A note on Chilean cell service

I bought an eSIM with a data plan through an MVNO before arriving in Chile, so I would have at least some connectivity without having to hunt down WiFi at campgrounds or gas stations. This has proved helpful, as WiFi is not a given at campgrounds. However, while 3G or better cell signal coverage is surprisingly broad, bandwidth to and from the towers seems limited, though this might be caused by aggressive deprioritization of my bargain plan. Even with two or more bars of 3G or LTE, I am often unable to reliably send an email during the day or evening. However, I am sometimes able to download podcasts (~100 times the size of an email) on the same connection first thing in the morning.

In practical terms, this means that if you plan to work down here, you cannot simply buy a plan with a large data cap and arrange your schedule to be in a major town or city when you need to be online. Even café or municipal WiFi networks may suffer from upstream bottlenecks. Reliable service is doubtless available without resorting to satellite, but it is not as easy as in the States or Europe.

Look closely — that guy has a picnic table

Lonquimay from below ski area

Top of the lifts

I wanna wish you a crater Christmas