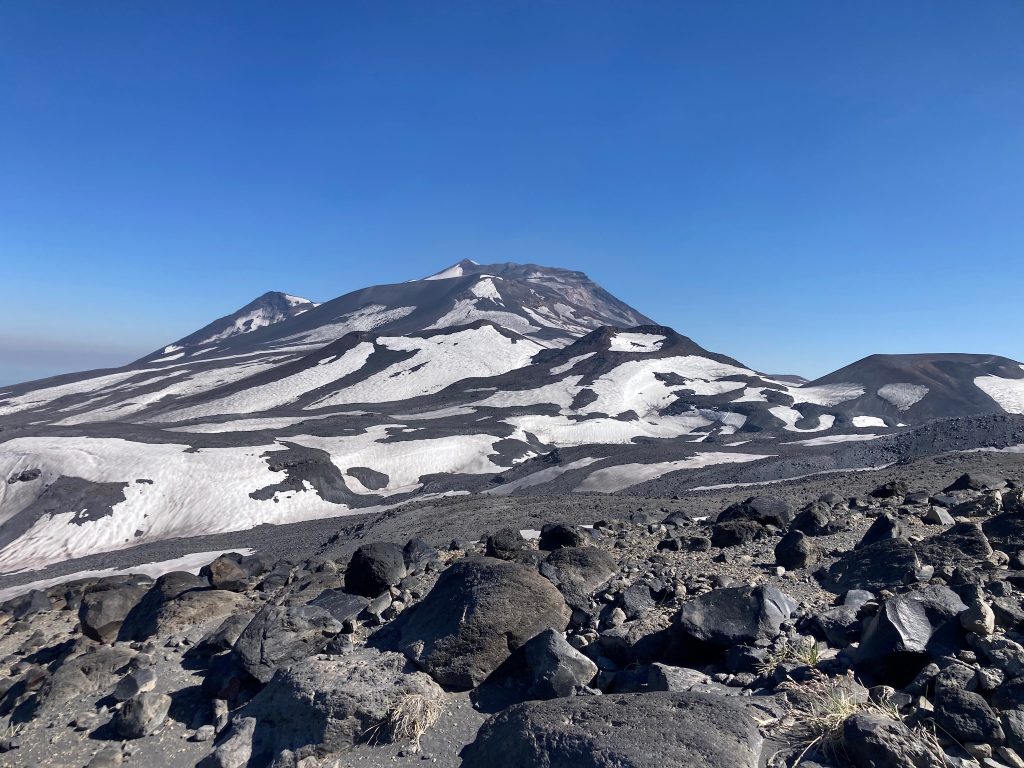 Nevado Chillan is the highest of three volcanoes east of the city of Chillan, with small glaciers on its upper flanks. It falls just short of being a P5K, with only 4600 feet of prominence, but was the first convenient peak for me south of Santiago. I wanted to take full advantage of the hotel, but also not to pay for another night, so I scraped myself out of bed, packed my pack, shoved everything else in my trailer bag, and headed up the road on my bike around 7:00. There is a good paved road to the ski area, but is steep enough that I was glad not to have my trailer. Even with my bike in “fun mode,” I felt sluggish on the climb with so many miles in my legs. 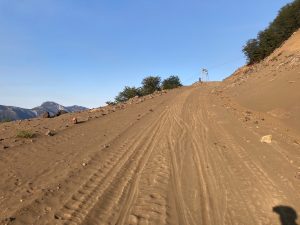 I had hoped to ride up the service roads to the top of the lifts, but soon found that the mountain consists of soft volcanic powder. While rideable with some care going down, riding up any significant grade on anything less than a fat bike was out of the question, and the service roads were quite steep, probably meant for tracked vehicles. I pushed my bike up to the first switchback, then locked it to a lift tower to start walking. Chillan seems to be a huge and varied ski area, rising from a base in the valley to a peak somewhat below the saddle between Nevado and Volcan Nuevo, with perhaps a dozen or more lifts both below and above treeline. There is some sort of bike park in the summer, but it all seems to be near the base. 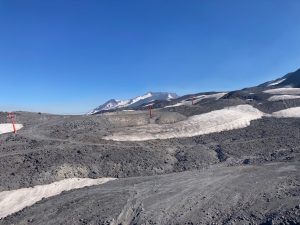 I made my steady way up the slopes and lifts, frequently backsliding and pausing to cough. The occasional pieces of snow I crossed were much easier than the mix of fine dust and loose, jagged rock. From the highest lift, I continued along a track winding in roughly the right direction, which ended at some kind of monitoring station near the broad saddle. The summit still looked very far away, and I was tempted to visit the lesser peaks instead, but I had already come this far, and had plenty of daylight. 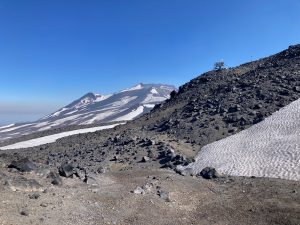 End of the road

The terrain here is complex, with gullies, hills, occasional abrupt drops, and better and worse volcanic debris throughout. With nothing living and everything similarly-colored, it can be hard to read elevations when looking ahead. I made the mistake of traversing too high at first, eventually giving up and dropping to lower-angle terrain. I learned the hard way that the best route stayed on the lowest-angle ground even if that meant meandering, and took advantage of any lingering snow, which was firmly consolidated but not icy. I had an OpenStreetMap line to follow, but it was not of much use, since the best route depends upon the snow. After unnecessarily going over one final annoying bump, I finally had a straight shot at the peak. 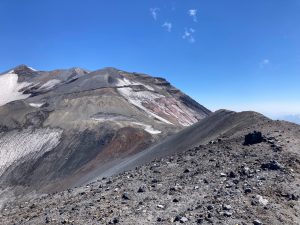 In current conditions, the climb was a mix of snow and deep volcanic dust/sand, with a couple of bands of slightly more solid rock being the only obstacles. I began to find bits of trail below the first of these, which sometimes made the sand slightly more tolerable. I was still suffering from whatever I had caught before my flight down, and between the general malaise and frequent coughing breaks, I made pathetically slow time. I had told the carabineros that I would be back around 4:00, and while they probably did not care, I felt some absurd obligation not to be too much later than that. 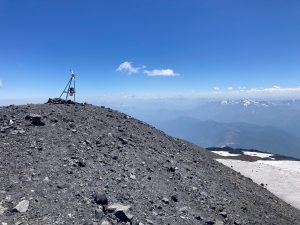 The final ridge was incredibly windy, so I quickly inspected the summit marker — a metal thing with an ice axe welded to it, plus two register boxes with some random paper scraps — then retreated to some slight shelter to put on all my clothes and have lunch. The air was hazy, probably due to windblown dust, but I was able to clearly make out Velluda and Antuco to the south, and barely see Domuyo to the east in Argentina. I had contemplated climbing Velluda next, as it is more impressive and prominent, but decided I did not want to make the detour given that it is supposedly difficult without snow. 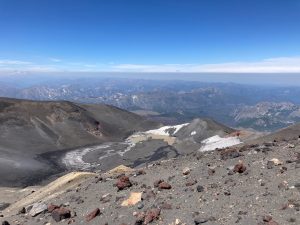 The way down was, of course, much easier. I plunge-stepped down the final climb, then found a better line through the rolling terrain around the Nuevo Volcan. I would normally run terrain like the ski area roads, but I was not feeling my best, and did not need to make up time. Just below the highest lift, I met a truck that had buried itself to the axles trying to get through a patch of snow, with a tow strap “helpfully” extended from the front most of the way to dry ground. This looked like a bad situation, but just as I arrived, a front-end loaded and backhoe drove into view. I expected him to swap the tow strap and drag the truck backwards, but he chose to solve the problem much more thoroughly. 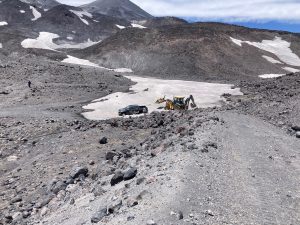 Friend to the rescue

I enjoy watching people operate heavy machinery, because they often demonstrate finesse and/or use it in nonstandard ways. The backhoe driver lowered the bucket and drove straight at the snow, slightly downhill, scooping it up until he created a big enough pile to stop the machine. He then lifted what was in the bucket and deposited it on top — so far, so good. But he had not scraped all the way to the ground, so when he tried to back uphill on compacted snow with a lighter machine, he predictable spun out. However this was clearly not his first time doing this, so as soon as he stopped moving, he tipped the bucket down, then lowered it and used it to push himself backward. A couple such hops later he was free again, ready to make another run. He mostly kept going in this fashion, pushing an ever-growing pile of snow around one side of the truck, but sometimes took snow from the pile to deposit it to one side. I left before he finished, but I presume he cut a path around the truck, then towed it forward to safety. I am not sure how he would have approached snow on a crest instead of in a dip, but I am sure he had a suitable technique.

Entertainment over, I continued down the ski area to my bike, then bombed down to the gendarmeria, arriving just before 4:00 to check out, once again banging my head on their Christmas araucaria. I fetched my trailer from the hotel, then hung out on their porch using their WiFi for awhile before rolling downhill in search of a place to camp. It was another depressing semi-stealth affair. I tried along the main, paved road for awhile, finding only barbed wire and locked gates, then turned on a dirt side-road hoping for better luck. This, too, was fenced and gated, but one of the gates was the kind with just a loop of wire over a post. I was tired, and it seemed to be an abandoned dump for yard waste, so I pulled my stuff out of sight and set up my tent. Privado, reglado, cerrado: it’s the Chilean way.

End of the road

Nuevo from near summit

Friend to the rescue