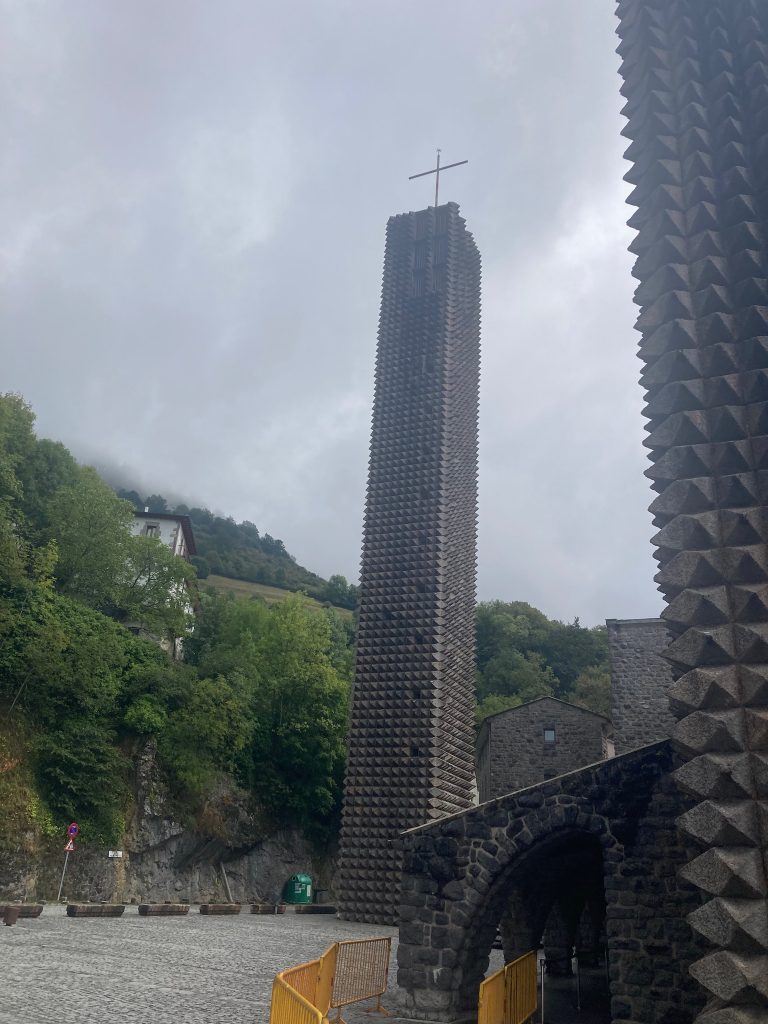 Aketegi, another Spanish provincial highpoints in a really Basque part of the country, was my last peak before flying home. Waking up in our weird hotel, Mike and I drove north and west through the mountains toward the north coast, at first on the autovia, another spectacular alternation of bridges and tunnels. It cut straight through the hills from the dry southern side to the permanently wet and dreary north, under villages, farms, and fields. Once on the side-roads, we wound crazily in and out of valleys on a narrow strip of unstriped pavement, traveling much farther and more slowly than the straight-line distance on the map would suggest. We briefly saw some limestone cliffs through the clouds and mist, but for the most part the drive was free of scenery. The road signs were all in Basque and Spanish, with the towns having seemingly unrelated Basque and Spanish names, and the latter were usually crossed out in green spray-paint. Spain is more of a passive-aggressive agglomeration than a nation… 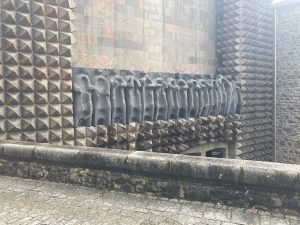 According to Peakbagger, the place to start hiking for Aketegi is Arantzazu, a large Catholic sanctuary and tourist attraction, and a vision straight out of a horror film. The sanctuary’s architecture would be disturbing even in the best conditions, lacking only the twisted, screaming faces of sinners on its spindly, spiky, hostile towers. When we arrived mid-morning, ours was the only car in the large lot, and we were the only visible people. The local businesses, one of which I hoped would sell food, and the supposedly full guest house where we had tried to make a reservation, were all closed and locked, and the open public restroom was foul and unlit. The thick mist and thin drizzle made it impossible to see more than 100 yards. 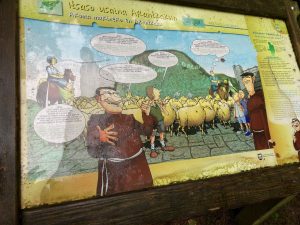 Tired and suffering from caffeine withdrawal, I almost stayed in the car, but Mike convinced me to go for a walk in the rain. Thanks to a downloaded GPS track, we managed to head in the correct direction through town, where we found the only open business, a bar that seemed to be serving both breakfast (coffee and pastries) and dinner (beer and salty snacks). I ordered coffee and some food, and felt much better about the day as the caffeine hit my brain. Again following the track, we found the correct dirt road taking us out of town, which wound through mossy woods toward who-knows-what, slowly deteriorating into a trail. A couple of signs along the way featured cartoon Basque people doing characteristically Basque things like being friars, herding sheep, and pronouncing words with too many k’s, x’s, and z’s. 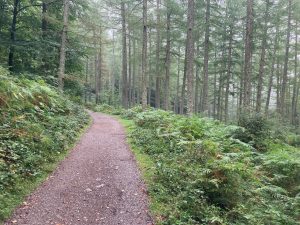 The trail/road eventually led to an open plateau, where we continued along some confusing roads in the general direction of the summit. We eventually reached another bar/cafe, again showing some activity, but it seemed like a locals-only joint. Somehow vehicles reach this plateau, and I was a bit concerned that we would get in trouble for crossing someone’s land or harassing their sheep. After following the main road a bit too far, we cut cross-country back toward the track leading to Aketegi, passing through rolling territory dotted with limestone outcrops looking a bit like tombstones.

What is apparently the correct track ends at someone’s house, where we saw a car, no people, and an aggressive but thankfully chained dog. Passing quickly by the barn, we eventually picked up some braided trails with occasional pain markings leading toward a ridge. It had been drizzling for awhile, and the limestone, mud, and grass were all slick, making for careful going in my worn out trail runners. The sheep had made a maze of tracks, which became much more confusing on the other side. Navigating purely by phone, we made our way up the best sheep-paths toward the summit, trying not to slip and coat ourselves with a mixture of clay mud and sheep droppings. We finally reached the narrow ridge crest near a summit marker, from which we could see a bit of grass to one side, and mist and a cliff to the other. I visited both the marker and the red dot on Peakbagger, marked the latter green, and considered my work done. 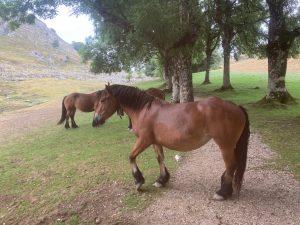 Returning down the slick sheep paths, we found a trail that worked its way above the barn and angry dog to join the driveway lower down, and took something more like the correct path back to the cafe/bar. Life was finally emerging as we returned, and we saw a few hikers in raincoats, plus some short, stocky horses with hairy fetlocks and long tails, apparently domesticated but serving no purpose. Back in Arantzazu, the clouds had lifted enough to see the tops of the creepy towers, and a few tourists were wandering around. The businesses were still closed, but there was a table selling local goods near the parking lot, where Mike bought some filled doughnut holes. There was no ticked on the windshield, but someone had cordoned off the car with tape and bollards. We packed up, then I quickly took down and replaced the tape for us to drive out. The clouds had lifted enough to see more of the surrounding valleys and cliffs, but this did little to dissuade me that Gipuzkoa is a real-life horror movie.