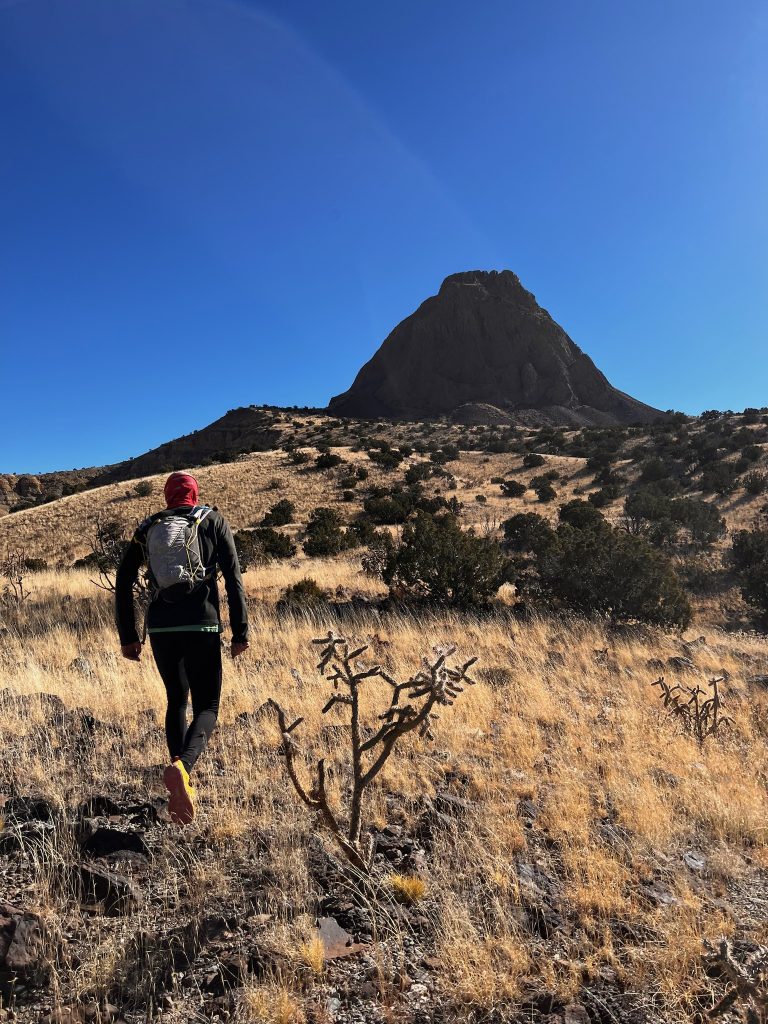 Cerro Alesna is one of many volcanic necks around the Mount Taylor Volcanic Field west of Albuquerque and north of Grants, home of the much more well-known Cabezon. It is located in one of the least-populated parts of the state, and not visible from any paved road that I know of. Though it is a striking landmark from Mount Taylor’s summit, I had not noticed it when racing the quadrathlon, and only became aware of it on a bike-n-hike outing with Mike a couple of years ago. We had scrambled another neck, Cerro Parido, and were riding around the northern end of the Mount Taylor plateau (Mesa Chivato) on a random dirt road when we saw an impressive spire of columnar rock to the south. I identified it as Cerro Alesna via the Peakbagger app, but we ran out of time and energy to try climbing it that day.

Investigating it more later, I found little information about it online, and no documented ascents. The land in the area is a messy patchwork of Forest Service, BLM, ranches, and mines, with the road we had ridden labeled on some maps as “private” despite being ungated and seemingly free to drive. Alesna itself is almost certainly on private land belonging to either a near-defunct mine or a ranch to its south. Trying to reach it from near Grants last year, I found aggressive signage and active use to the south, and turned back. This year I finally came back to it from the quiet northern side, finding the scrambling surprisingly easy at no more than class 3 on the southwest side.

I had known Nolan for some time online, but had not done anything with him, so a desert bike-n-scramble was a bit of a risk. He seemed fit and enthusiastic, though, and if the scramble got sketchy, at least I thought it would be fairly short. We agreed to meet at the turnoff from Highway 550 at 8:30, but thanks to having to stop at Walmart for calories, I was fifteen embarrassing minutes late, a mistake that would come back to bite us later. His car being more capable than mine, we piled both bikes into the back and drove around the north side of Mesa Chivato, stopping about 25 miles from our objective. We could have driven the rest of the way — the dirt roads are Subaru-able, or fine for a passenger car with a careful driver — but wanted to get in a full day and to be somewhat discreet. 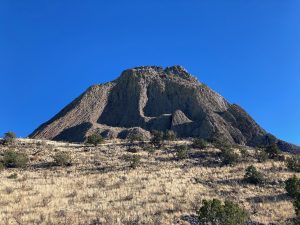 It was chilly and breezy as we set off by bike, and I soon found that the road was sandier than I had remembered, a problem for Nolan on his 45mm tires. He was a good sport about it, though, and clearly practiced in dealing with such terrain. As expected, we met no one on the ride. Most of the volcanic necks are on the other side of the mesa, but we passed a number of interesting-looking sandstone bluffs that could be worth climbing.
I found the long-abandoned spur road north of the peak exactly as I remembered; the same cows might even have been grazing near the tank.

We locked the bikes together near a rock, then took off straight for the summit, now less than two miles away across a dry wash. This was probably the most unpleasant and difficult part of the climb, since the wash is wet enough during the spring and summer to produce a crop of thigh-high grass and grape-sized burrs. Continuing my theme of disregard for others’ welfare, I bashed straight through in my tights, with Nolan following along as best he could in shorts. Beyond the wash we found a quad track along an old fence, with a convenient crossing point making it unnecessary to pick our way through the barbed wire. 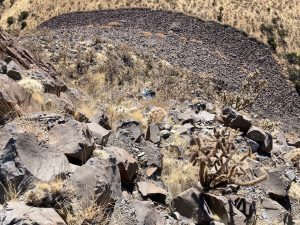 The vegetated slopes below the plug were teeming with cactus, some of it blending into the grass, making it difficult to both walk and scout a route up the peak. The columnar trachyte, while solid, looked too steep to scramble directly, but a left-trending ramp from the peak’s southwest side seemed promising. Reaching the southwest corner, we scrambled up some steep terrain, then traversed right to an easy cactus-slope that we should have taken in the first place. This slope eventually turned into a gully ending at a sort of headwall, where the columns were angled and broken into steps, allowing us to head up and left to reach the lower end of the ramp we had seen from below. It was not hard, but almost every surface that could collect dirt was home to a cactus, so I almost pet one, and Nolan got a bit more friendly. 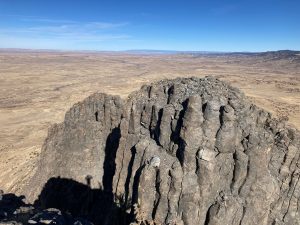 The bench looked loose and cactus-y, but the terrain straight up and to the right was steep and rocky enough to be unvegetated, so I headed that way. I found a bit more third class scrambling leading up a slot to just below the summit ridge. This might have gone directly at class 4, but the rock near the top was less columnar and more chossy, so I traversed left to a gully then climbed that to a notch. From this notch it was a short and easy scramble to one summit, where I found no cairn or register. The next point south looked equally high, separated by a small but steep and loose notch. We both cautiously traversed across, knocking down numerous rocks in the process. The other summit was much like the first, with what might have been the broad ruins of an old cairn, but no human evidence. Since Alesna stands by itself, I found the views underwhelming, with barren scrub desert to the north and west, Mesa Chivato to the east, and Mount Taylor its usual blobby self to the south.

With more knowledge, we took a better route on the return, descending the gully between the two summits, retracing our route to the fence, then following it through the dry wash to cow-paths and an old road leading back to the bikes. Even at this modest latitude, the days are painfully short this time of year, so despite generally favorable winds it seemed likely we would need headlamps before reaching the car. We met one truck driving the other direction on the road, whose driver paid us little mind, and another pulling a cattle trailer. Before we reached him, the driver rummaged in the cab and presented us with a water and Gatorade, apologizing that he had nothing better. He told us he was gathering the calves, and asked if we had seen the “other cyclists,” which turned out to be us on our way out. He and his companion were friendly, and did not seem bothered that we were out there. He also said that one could follow the road we were on all the way to Grants, contrary to my suspicion that it was gated somewhere south of Alesna. Whatever the map says, it seems property rights are forgiving in this little-used or -loved corner of the state. The final ride turned into a cold game of headlamp chicken with a new moon, but neither of us caved. Nolan drove me back to the highway, leaving me with a 90-minute drive back to Santa Fe. The whole outing was around 14 hours door-to-door, not unreasonable but long compared to most of what I do these days.