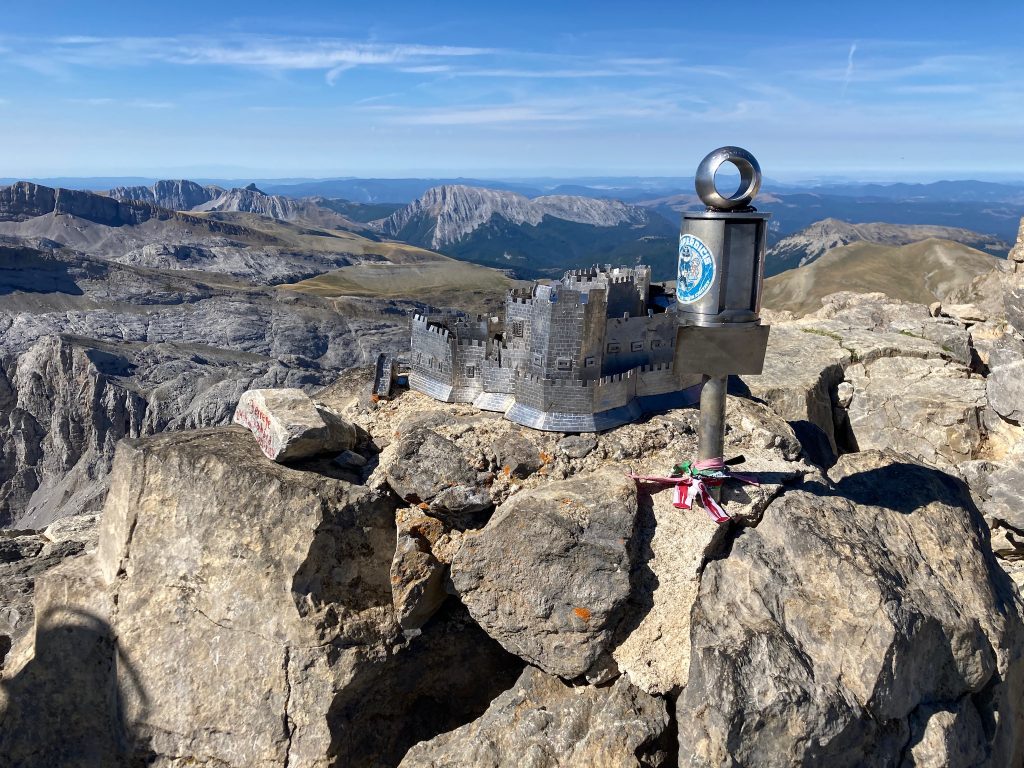 I had to make some miles to meet Mike in Tarbes (best pronounced in the most American way possible, with a strong “r” and voiced final “s”), but thought I might be able to squeeze in Mount Rouch, a prominent peak on the Spanish border. I rode up narrow pavement and rough dirt (closed to cars) to where the trailhead was supposed to be, and found the trail, but it looked overgrown and steep, and I was too tired from the previous two days’ unaccustomed hiking to fight it. I instead took a nap under a bush, then headed down ever-larger roads to the north. After following a mix of roads and bike routes to Salies-du-Salat, I avoided the main highway on some rolling country roads to the south, arriving in Tarbes with some time to spare. 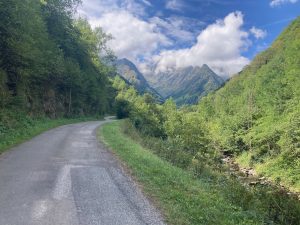 Mike arrived from Spain late that evening, and we took off from the hotel at a reasonable hour to ride the famous Col du Tourmalet. The road goes from nowhere to nowhere, connecting two roads that are not major highways, so I was not expecting much traffic. But for some reason the road through Bagnères-de-Bigorre was solid cars, as was the road on down the other side through Lourdes, with its famous cathedral. The pass itself was impressive enough, winding and fairly high, and it attracted plenty of cyclists, but it was probably my least favorite day of riding in the Pyrenees. The Col de la Pierre Saint Martin and Port de Lers to either side are much more fun to ride, despite being lower and less famous. I felt bad for dragging Mike far from home and over to the expensive side of the border for such a disappointing checklist ride, but I had no reason to anticipate it. 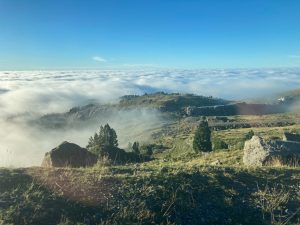 Returning to Tarbes, we somehow crammed both bikes into his new car, then drove back over… the Col de la Pierre Saint Martin! It was evening, and the sun cast long shadows and illuminated the cloud deck below us on the French side. The refugio on the Spanish side of the pass was nearly empty, so we got a whole dorm room to ourselves for not much money. The hosts and clientele all spoke Basque, and while they were not hostile, it did feel like a different country, a feeling reinforced by their early hours — the restaurant and bar closed at 9:00! Mike asked the host about how to reach Mesa de los Tres Reyes, the highpoint of Navarre and our goal for the next day. 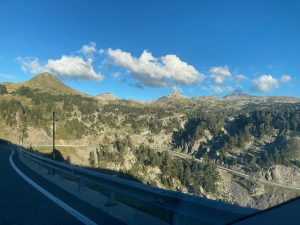 Uncertain about the afternoon weather, we started fairly early the next morning, hiking down a sort-of trail where the map and refuge-keeper had indicated. However the area is lousy with cows, and the grass grows quickly, so the trail was impossible to follow initially. We eventually found one of several paths leading toward the peak, intermittently marked with painted stripes on rocks and trees. Different colors and patterns indicate different levels of trail, from main GRs to local routes, but none seemed especially popular. The terrain is immensely confusing, with small defiles leading between short limestone crags, and dense deciduous forest. Fortunately the map continued leading us in the right direction, and we eventually emerged in an open valley below a long ridge leading to the summit. 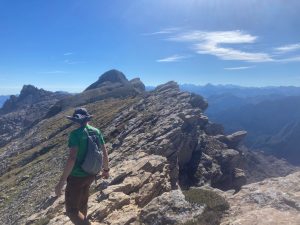 We passed a couple of other hikers on the faint trail to the ridge, then continued along the rolling crest. Once the ridge turned toward the summit, it became sheer on its right side, dropping off to rolling country and the plain of northern Spain (in which, by the way, the rain does not mainly stay). Some sort of eagle cruised by below us, seemingly oblivious. The summit looked far away, with some scrambling along the ridge. I would have enjoyed it, but after two days without caffeine the withdrawal made everything seem pointless. 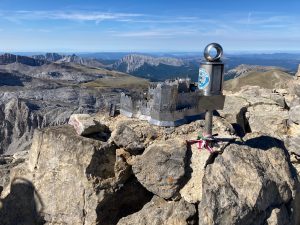 At the last notch before the summit we found a much better trail, probably coming from another refugio to the south, along with a minor crowd. We continued past the summit, then followed bits of use trail up a minor scramble to the top, where we found a group of young Spaniards, who were characteristically loud and self-absorbed. We found a spot amidst the noise to eat lunch, I took a few photos, then we descended more directly to the trail before returning mostly the way we had come. Mike had hoped to tag Aneto, the Pyrenees’ highpoint, the next day, but with the forecast calling for thunderstorms, we decided to settle for Aketegi, the highpoint of what turned out to be an even more Basque province. We drove for awhile toward Spain’s northern coast, then found another cheap-ish and very strange motel for the night.

Pic d’Anie from near Tres Reyes