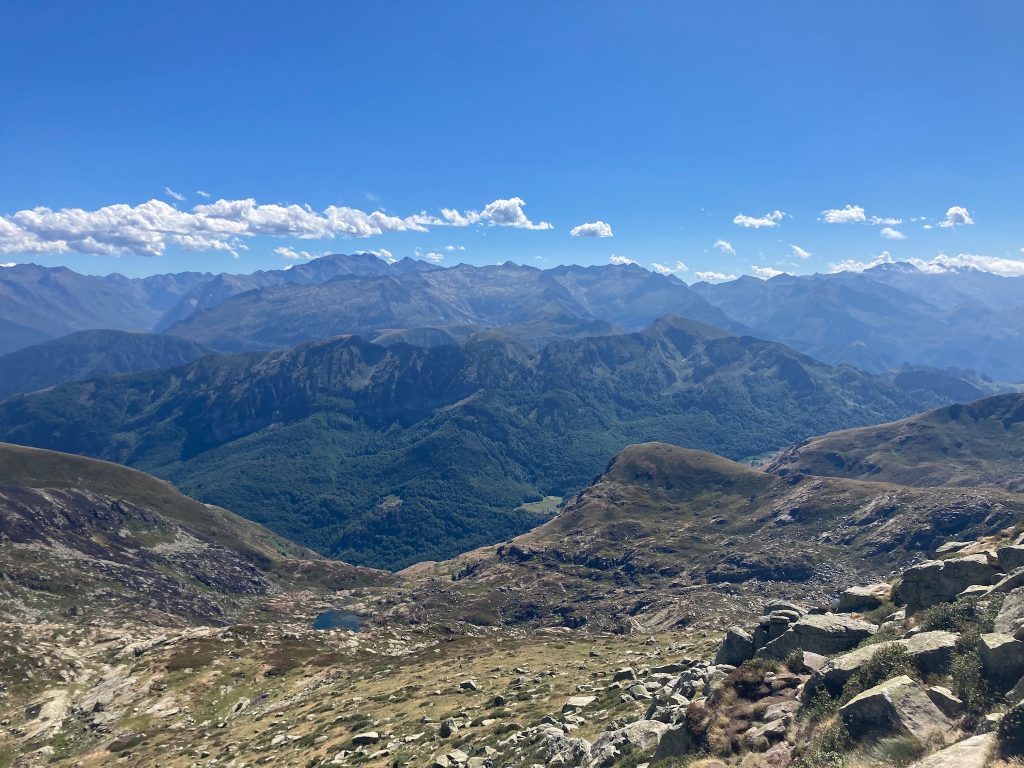 Waking in my cold camp downstream from the Port d’Envalira, I swiped around on my map, looking for an interesting way to get from where I was back to Tarbes in the right number of days. The quickest route would head downstream to the plains at Foix, then turn west to grind out the miles, but I could hike again, and had time to do a few final peaks. Looking around for prominence points on Peakbagger — usually a good way to find summits with a view — I spotted the Pic des Trois Seigneurs a reasonable distance to the northwest. 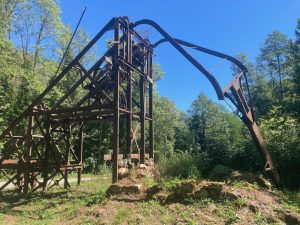 I followed the N-20 down the Ariège River to Tarascon-sur-Ariège, where I resupplied, then turned west on a side road up another river valley to Viadessos. There the road splits, with most branches dead-ending at various villages or ski resorts. However one branch continues over the Port de Lers to the Arac River, passing the trailhead for Trois Seigneurs along the way. OpenStreetMaps has surprisingly good coverage of shops and water sources, so I was expecting to find water in Viadessos, but the fountains and taps it indicated were all shut down. I had first noticed this in the French Alps between Alpe d’Huez and Grenoble, where signs explained that this was due to the hot, dry summer. Presumably the same was happening in the Pyrenees, a sad loss of hospitality brought on by climate change. 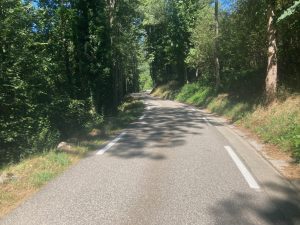 The road on this side of the Port de Lers is narrow and seldom-used, making it popular with cyclists, and I saw several on their way down. It was painfully hot lower down, so I was on the lookout for water, and soon began seeing seeps and rivulets emerging from the limestone hillside. I stopped at one, walked into the woods with my bottles, and found a piece of hose forming a makeshift tap. There were clearly livestock in the area, but the water appeared to be flowing straight from the ground, so I trusted it enough to drink. Water problem solved, I continued up the narrow, winding road, barely more than a lane wide. The few times I met a car going the other way, we both dodged with room to spare, but the prospect of oncoming traffic kept me alert. 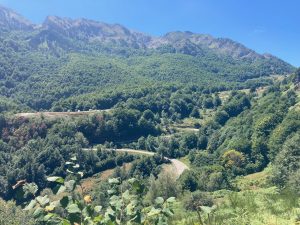 I found a trailhead a couple of switchbacks below the pass, locked my bike to the trailhead sign, then waited for a break in the hikers to change into my hiking clothes. I have little interest in lakes, but apparently the area’s main attraction is the Étang d’Arbu, a decent-sized lake in a bowl south of the Pic des Trois Seigneurs. I followed a well-used trail that traversed across the bowl out of the woods, then climbed an open bowl to the lake. It was brutally hot and humid, and I quickly went through my single bottle of water. A teenage kid from one of the families headed for the lake left his parents to hike with me on the climb, and I was hard-pressed to keep up in my out-of-shape state. 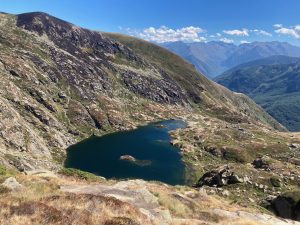 The lake was scenic enough, in a bowl filled with white rock outcrops surrounded by peaks, and the warm day was good for swimming. Most people were content to sit around on the rocks, but there was the expected middle-aged shirtless Frenchman standing waist-deep in the lake. The trail becomes much fainter past the outlet, but I found a path continuing around the left side, then winding between rock outcroppings toward the ridge. I filled up again with water at one of the streams, confident that I was above all the livestock and most of the humans. I passed a few people headed in the opposite direction, but mostly had the climb to myself. There was even a brief passage of third class scrambling, where I cautiously tested my toe’s edging capacity. 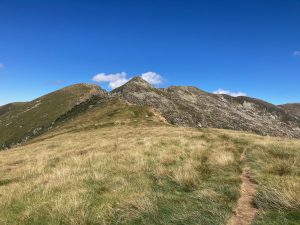 Near the ridge I joined a slightly stronger trail leading from the pass to the Pic, and turned right to follow the ridge to the summit. The breeze made it pleasant or almost a bit cool, and I could see an impressive spread of higher peaks to the south, as Trois Seigneurs stands somewhat apart from the main chain of the Pyrenees (yay, prominence!). Unfortunately I shared the summit with enough young French people to be loud, so I did not want to stay for long. Rather than retracing my steps, I followed the ridge over to the Pas de Lers, crossing a couple of other minor summits and passing quite a few people. I even saw some paragliders, who launch near one of the switchbacks just on the other side. It was a pleasant stroll, but I was mindful that I needed to descend and find food and water before dark.

Back at the pass, I hike-jogged the road back to my bike, then hid behind someone’s parked car to change back into bike shorts. I rode over the summit, then descended to the first sizable town, Massat. I had intended to stock up and find a place to camp off the road, but it seemed I was back in the more-settled regions where finding an out-of-the-way place would require effort. So I followed the signs to the town campground, and paid a few dollars to sleep on the grass next to too many other people. There was some sort of gypsy-folk-rock concert going on that night, and while I did not want to mingle with the crowd near the band, I did enjoy going to sleep listening to it at a distance.