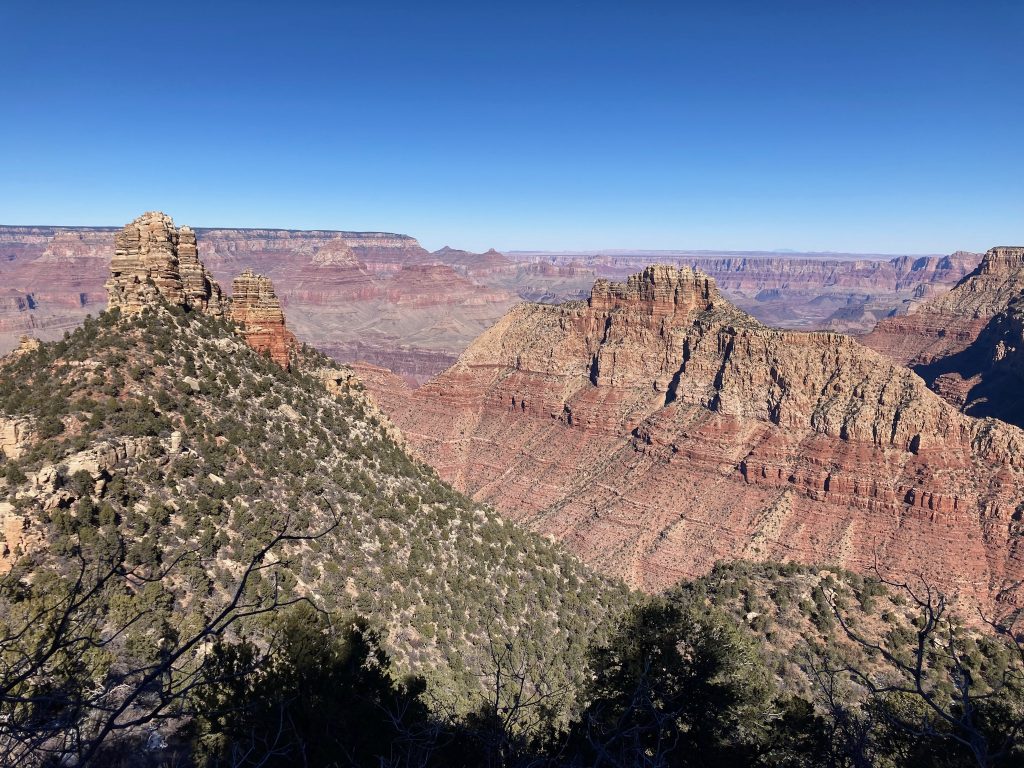 Sinking Ship and Coronado from rim

One way or the other, my last day in the Canyon would be spent near its eastern end, along the Tanner and New Hance trails. There are a number of greater and lesser summits in the area, ranging from the interesting but not prominent Sinking Ship to the prominent but not interesting Grandview Benchmark. The ambitious plan would be to connect the New Hance and Tanner trails via the Escalante Route on bottom and a hitch-hike on top. (I was traveling without a bike for the first time in awhile.) This would allow me to get in a nice long run and tag Coronado, Cardenas, and Escalante Buttes via short side-trips along the way. But it would also require ambition, which I once again found lacking. Not wanting to waste the day, I opted instead to make three short outings from the rim to tag Coronado, Escalante, and the Sinking Ship. 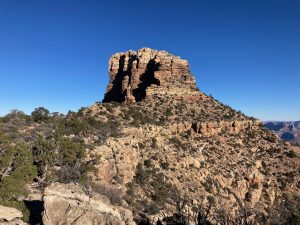 New Hance seems to be the most obscure and least maintained official trail on the South Rim, with nothing but a couple of “No Parking” signs indicating the trailhead. I parked at one of the dirt pullouts west the signs, threw some food and water in my pack, and started off hiking in my down jacket, barely warm enough thanks to the wind and shade. Coronado is close to the rim and only class 3, so it unsurprisingly sees a fair amount of traffic. I bumbled down the trail to just below the Coronado-Rim saddle, then left it to follow intermittent use trails toward the butte. 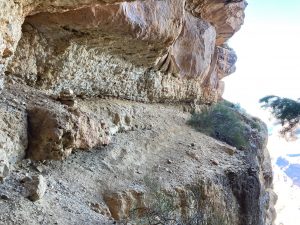 All options eventually converged on a traverse around the right side of the butte, and the use trail predictably improved, with even a cairn here and there. I had skimmed a trip report about Coronado, so I knew the route went up a steep gully, then traversed to another via an exposed ledge. Unlike on the less popular Pattie and Lyell, there was no guesswork involved, and the “exposed” ledge was tame by climbing standards, broad enough for a faint trail. In short order I was on the summit plateau, where a little scrambling got me to the highpoint. The copper register box contained many entries, some recent, and even a few historical curiosities, though it only went back to the mid-80s. 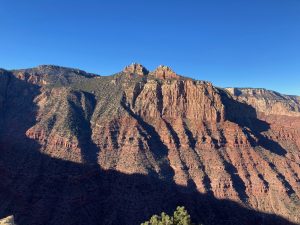 I sat on the summit for awhile, debating whether I wanted to continue down the trail and around to the Tanner, but the Sinking Ship had drawn my eye all morning, perfectly lit by the low morning sun, and I had already seen the Tanner and Escalante. I meandered back down Coronado, picked up the New Hance, and hiked back to the car to drive a mile in the wrong direction to park at another random pullout. There was no trail here, but the woods were open, and it was only about a mile to point along the rim closest to the Ship. I crunched through the intermittent snow on this highest part of the South Rim, listening to a podcast and occasionally checking my phone to make sure I was headed to the right place. 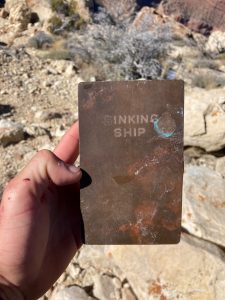 There were bits of use trail leading through the oakbrush off the rim, and enough lingering snow on the north slope to make the ground slick. I picked my way down to the saddle, then up to the Ship’s bow, knowing only that the route went more or less up the front. It turned out to be the day’s most engaging scramble, starting up a corner to the right, then tunneling left to a steep, chossy gully with a tricky chockstone to surmount near the top. I looked to the right again, then scrambled up and around left, arriving at what I suppose was the fo’c’sle. I saw that, though the ship was going down, the poop deck was still highest, so I continued through a breach, crossed the main deck, and headed left to what seemed the likeliest way to the summit. This proved surprisingly challenging, with a wide stem to get around a large chockstone. Beyond, I continued up easy ground to the summit cairn, which was for a change not on the highest point. I signed in, impressed but not surprised that Bob had beaten me to it by a month, then tagged the highest point. I briefly looked for an easier way off the back side but, finding nothing appealing, retraced my route to the car. 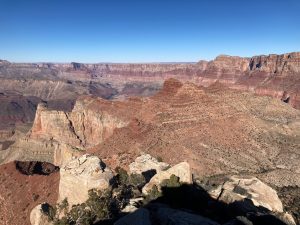 I still had daylight to burn, and felt that driving up Grandview Benchmark would be too lame, so I drove over to Lipan Point, put a mostly-empty jar of peanut butter in my pack (my only remaining trail food), and took off jogging. The Tanner was high and shaded enough to hold snow, and popular enough for that to have been packed to ice in places, so I could not make very good time up high. I followed the trail to the saddle with Escalante Butte, admired the peculiar Seventyfive-Mile Creek, which runs west into the Colorado where it makes a 90-degree bend, then picked my way up the Supai to Escalante. The summit area consisted of several large Coconino blocks, of which the northern two proved to be the highest. Reaching the actual summit requires a scramble to the left block, then an easy but heady step across to the right. 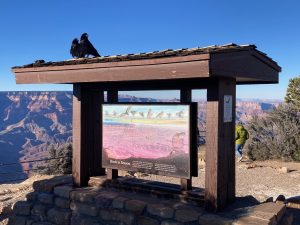 Birds of any season

It seemed like I could continue along the ridge to Cardenas, nabbing another unnamed butte along the way, but I felt that sufficient unto the day was the effort thereof, and I took thought for the morrow’s long drive. So to the rim I returned, mingling briefly with the tourists before driving out of the park to camp at another frigid place with cell service. The Grand Canyon wears you down like so many deserts: the plants scrape and tear at you, the rock wears your skin, the day-night temperature swings leave you dehydrated or shivering, and the sand gets everywhere. But my to-do list is longer than it was before I came, so I will lick my wounds and return.

Sinking Ship and Coronado from rim

Birds of any season