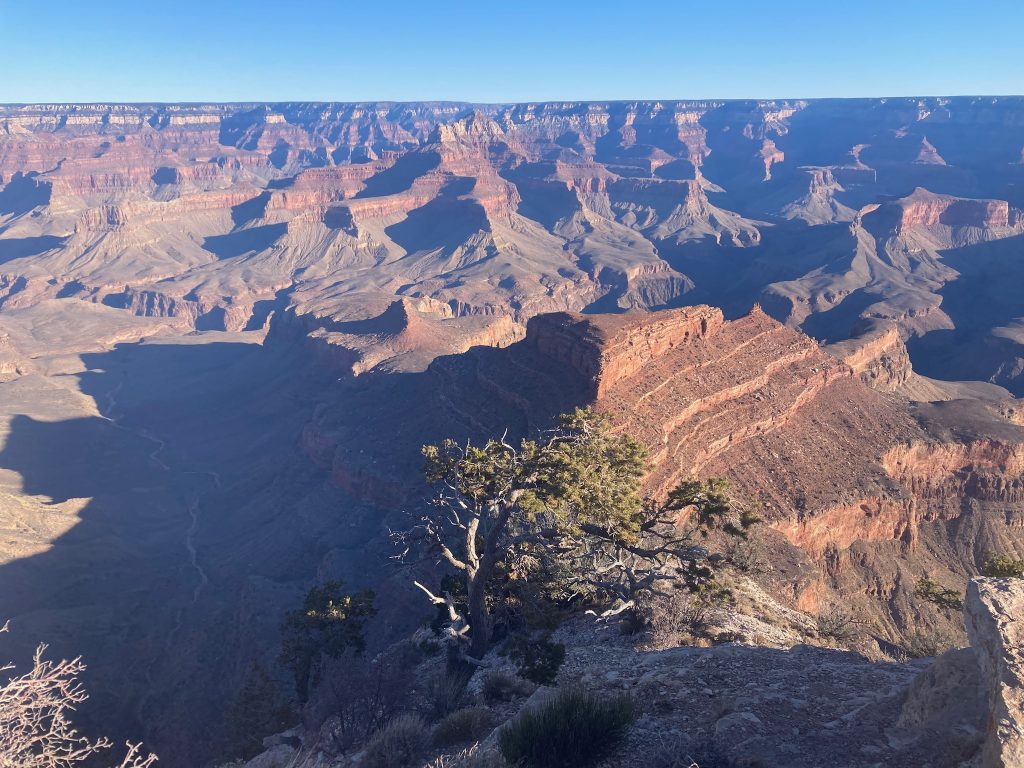 Newton from the rim

The route straight off Shoshone Point was one of the lines on Harvey Butchart’s maps that interested me before this trip, and Pete’s recommendation made it a top priority. It is an ancient route, as evidenced by some Moki steps, and the most direct access to three Supai buttes: Newton, Pattie, and Lyell. Pattie and Lyell are moderate scrambles with short low-fifth-class cruxes, while Newton apparently involves some more serious 5.7 face climbing. But this outing is interesting at least as much for the route down to the Hermit Shale as for the minor plateau bumps. As it turned out, Newton’s crux was more than I felt up for, Pattie and Lyell were more my speed, and the whole thing was a good education in Canyon cross-country travel. 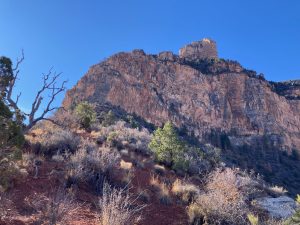 I drove into the park early again, then parked at the small, unsigned Shoshone Point lot, spent some time preparing, and hiked the old dirt road to the picnic area. It is a surprisingly popular area for being out of sight of the road, and there was a gaggle of tourists milling around taking photos. I wanted to see the point, and was not sure where the route began, so I waded through them to scramble down the ridge crest. I was eventually stopped by a taller cliff band which seemed to have no easy route through, so I waded back through the tourists and started down the gully southeast of the point, following some game and social trails.

The terrain was classic Canyon: loose, steep, and slightly brushy, with occasional small cliff bands. I picked my way through these, at one point using a conveniently placed small dead tree, then traversed back toward the ridge when doing so looked reasonable. I followed a game trail through some slightly less pleasant brush, finding recent dot-rubber tracks suggesting that I was on course. These tracks continued along a flatter stretch of the ridge crest, then confused me at another larger cliff band. There may be a sneaky way directly through this, or some Moki steps, but I instead traversed right again to pick my way down a lower section of the earlier gully before returning to the crest, this time on a more obvious use trail. 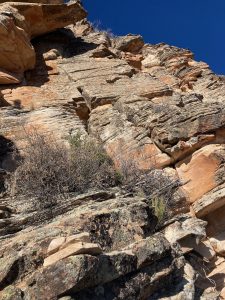 From here the route stayed near the crest, weaving back and forth to traverse ledges and descend slots through the Coconino. I found some cairns in this section, which were reassuring but not particularly helpful. At the top of the Hermit, I followed the approach shoe tracks back left, then along the ridge toward Newton Butte. There were some mildly annoying blocks and cliffs in this section, but it was mostly easy walking. Once I reached the plateau before the butte, I headed right and made a gradually-ascending traverse, aiming for the most likely place for a route to exist on this side, a slightly-broken area near a large detached block. 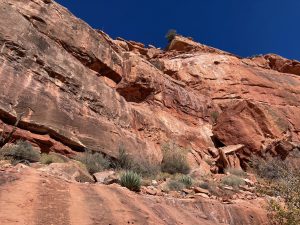 An old piton told me I was in the right place, though I found it odd that it was well left of the big block. Later I learned that the route climbs the short face past the piton to traverse left along a ledge 10-15 feet off the ground. But I though the other direction looked better, so I chimneyed up between the block and the butte, then headed right to inspect some steep parallel cracks. They looked like they might lead to easier ground above, and go at about 5.7, but my head was not in the right place, whether because of the cold or my unfamiliarity with the Canyon’s style of scrambling. I backed off, retraced my steps, and headed for Pattie. 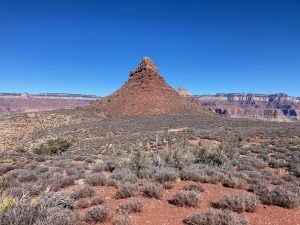 The first order of business was getting down to the top of the Redwall, which usually offers a low-angle and friendly bench to travel along the Canyon. Following the Butchart map, I backtracked a bit to get down a mostly-undercut cliff band, then continued descending to near the Redwall rim. Pete had claimed there was a “good trail” in this section, but I would characterize what I found as an “intermittent and faint game trail.” The ground was littered with the usual twiggy brush and spiky plants, and the route wandered in and out of many shallow washes, but it was still efficient travel by Grand Canyon standards. 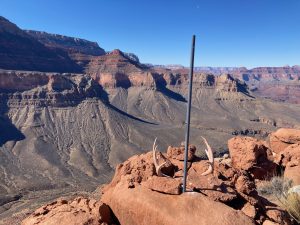 From the base of Pattie Butte I started up more or less straight toward the summit, dodging the first cliffs left before returning to the ridge. I found the crux through a short white cliff-band on the right, a sort of chimney followed by a cramped step left on a ledge to another short slot. The chimney felt awkward and grovel-y, but as I was learning, this is typical for Canyon scrambling, and fairly secure. Above, a bit more easy wandering led to the summit plateau, where I found a metal post, a set of deer antlers, and the usual copper register box. Looking back the way I had come, I could see one of Harvey’s Redwall breaks, a steep slot near a pillar leading into upper Cremation Canyon. I debated taking that and returning via the Tonto and Kaibab with a possible side-trip to O’Neill Butte, but I had just ascended the Kaibab a couple of days before, and was not confident that I could handle it with my current attitude. 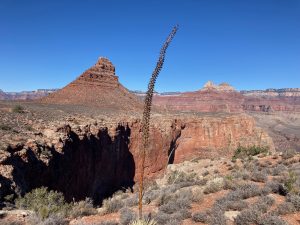 I instead retraced my route to the plateau, then continued around the other side of Newton near the top of the Redwall. The best path seems to stay close to the rim, where it is less steep and brushy, with occasional detours higher to avoid some gullies. It is only a couple miles in a straight line from Pattie to Lyell, but the meandering way along the rim is far longer and frustratingly slow. I was getting a bit worried about my return time when I finally reached Lyell’s base, and almost considered skipping it, but that would be too pathetic, so I headed up toward the summit. 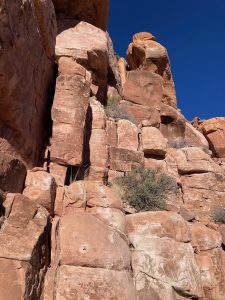 Lyell’s main challenge is getting through its obvious large cliff band, but there are several smaller ones below and above that require a bit of meandering. I headed right, briefly considering a steep-ish route through the main cliffs before continuing to find the obvious route, which was… you guessed it, another chimney. I scraped and scrapped my way up with a mixture of stemming, chimneying, and a couple hand jams, eventually reaching the top to find a cairn. From there I continued traversing up and right, finally breaking through onto the summit plateau via a tumbledown slot. From the slot I hopped through spiky rock and agaves back to the summit cairn. I took in the afternoon view of Brahma and Wotan across the way, shook my head at Newton, then retraced my route to the plateau. 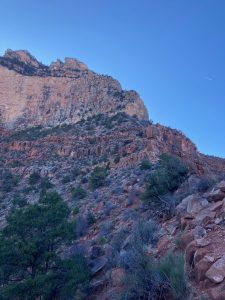 Continuing my tour, I traversed along the Supai back toward Shoshone Point, aiming for the gully leading to the saddle between it and the unnamed butte west of Lyell. This part was again frustratingly slow, but became more pleasant once finally in the gully, where periodic flash floods wash away the loose dirt and keep the plant life in check. I enjoyed the hike and scramble up the gully, then tolerated the final climb from where it faded to the ridge, where I eventually picked up faint bits of trail joining my morning route at the base of the Coconino. I halfheartedly looked for a more direct route up the ridge, but mostly retraced my descent, finally taking a more direct route left of the ridge through the Kaibab.

It was still some time before sunset, but the sun is low enough this time of year to offer good picture-taking light by mid-afternoon, so I jogged past quite a few people hiking the road out to Shoshone Point. I also found a herd of musty-smelling cow elk, utterly indifferent to the tourists taking their photos. The icy water jugs left on my dashboard had mostly melted, so I would have easy water for dinner after I once again drove out of the park to the convenient National Forest. I had one more day in the Canyon, and had to decide between more- and less-ambitious ways to use it.

Newton from the rim