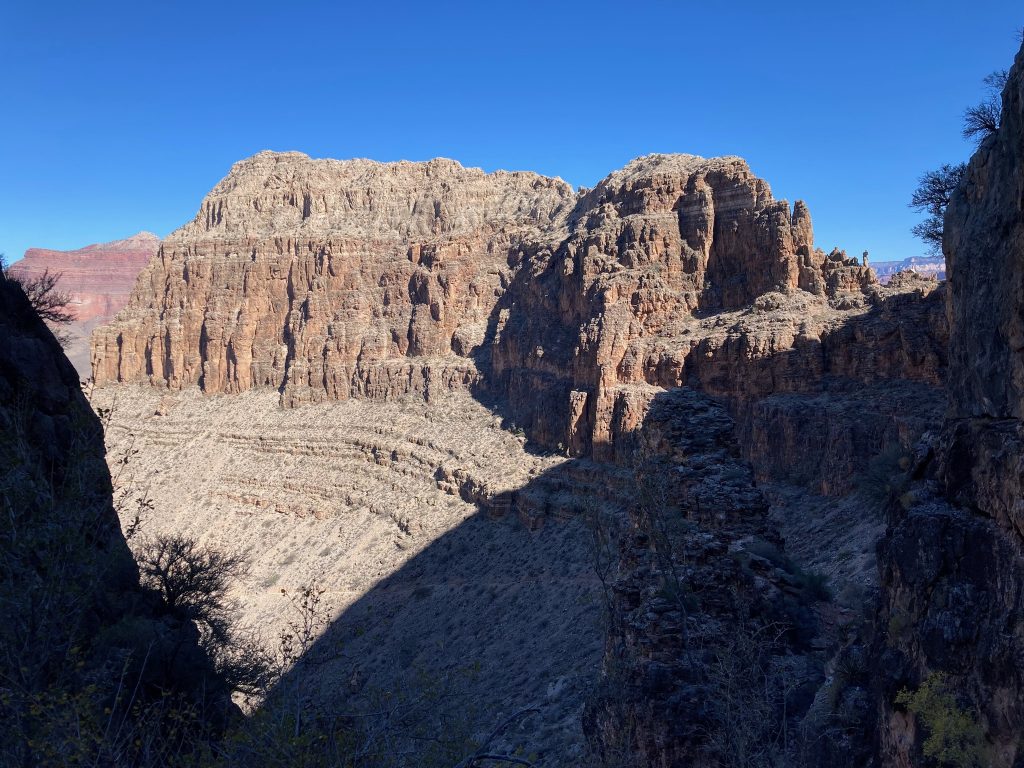 Cope Point is a Redwall fin just off the Hermit Trail, a minor and uninteresting thing compared to a major butte like Isis or Brahma, but supposedly a worthy scramble. I had only been to the Hermit area of the Park once, many years ago, so it was a good excuse to return. I hoped to do a more ambitious loop down the Hermit and up the Boucher Trail, but between the cold and short days, the mandatory shuttle system, and my feeling lazy and preoccupied, a trip down the Hermit to Cope proved enough for the day.

It was dark when I woke up, and my gallon water jugs were about one third frozen, so getting moving was a challenge. But I needed to get past the entrance station before it was manned, which I guessed happened around 7:00 AM, so I warmed up the car, scraped the ice off my windshield inside and out, and made my way into the Park along with a handful of sunrise photographers. I had planned to drive to Hermit’s Rest, but these days the road west of Grand Canyon Village is permanently gated and shuttle-only. As I later learned, overnight permits for that part of the park come with a gate code, but that was not an option for me. Fortunately it was too cold for the Village to be crowded, so I found roadside parking next to the shuttle stop, packed my backpack, and was soon on my slow, meandering way to the end of the road with some cold tourists and a burnt-out bus driver. 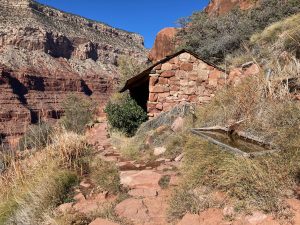 The upper Hermit trail is mostly well-built, with sections of the labor-intensive vertical sandstone paving found on the Grandview, but rough and steep enough not to be much fun to run first thing in the morning, especially with treacherously slippery frost on the log steps. It follows a collapsed section through the Coconino to a junction with the Waldron trail and, soon thereafter, the Dripping Spring and Boucher. Had I known better, I could have taken Forest Road 328 to the Waldron trailhead and avoided the entrance gate and shuttle entirely. 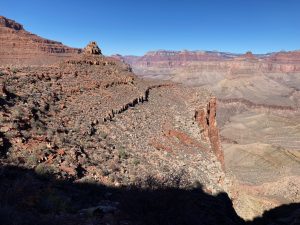 From the Boucher junction, the Hermit trail makes an endless, rolling, but generally downhill traverse through the Supai to Lookout Point, a minor bump a short distance off the trail. I passed a surprising number of backpackers on this stretch, and unlike on the main trails, both they and I were open to conversation. To my surprise, none were doing the Boucher-Hermit loop, instead opting for either an out-and-back or a shuttle loop from the Bright Angel. Someone had added Lookout Point to Peakbagger, so I went over to tag it and turn a red dot green, finding it class 3-4 on the front and class 2-3 on the back. 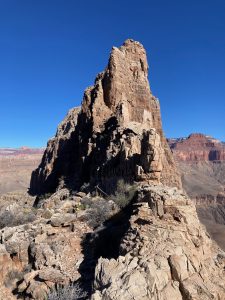 Cope crest from the saddle

Back on the trail, I continued to the top of the Redwall, then descended the “Cathedral Stairs,” a section of tight switchbacks through a north-facing break. I left the trail just past them, following faint game and/or use trails to the saddle with Cope Point. The crest looked serrated and steep, and the west side looked tricky as well, but I assumed I would find cairns or at least a viable route once I got closer. The east side was far too sheer to consider, but I found a cairn a short distance up the crest, and a faint route traversing along the west face. I learned later that the crest goes as well, but I was in the mood for a sure thing. 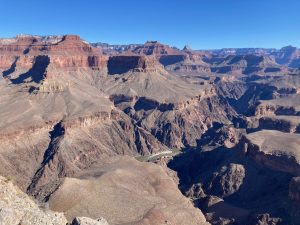 I traversed along rubble and poky plants until they gave out, then eyed a likely rib. Climbing it directly seemed like a bad idea given the exposure and untrustworthy limestone, but the chimney/corner to its right felt safe. I climbed this for awhile, traversed on another rubble bench, then wound my way through short cliff bands to the crest. From there it was an easy walk to the summit, where the copper register canister held a couple of surprises. First, despite being a class 4 scramble to a minor summit, Cope sees a surprising amount of traffic, perhaps a half-dozen people per year. Second, an original Butchart register is still hanging on, in which Harvey notes that his was not the first ascent. 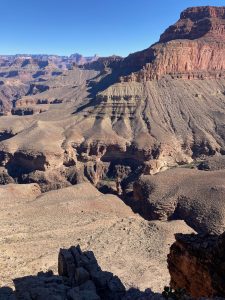 The summit is a better lookout than Lookout Point, and I wasted quite a bit of time there, admiring the Granite and Hermit Rapids, the Monument in Monument Creek, and the Hindu Amphitheater across the way. I also studied my intended route down to the Tonto, around to Boucher Creek, and up the Boucher Trail with a side-trip to White’s Butte. The endless Tonto meandering and the Boucher’s long Supai traverse ate at my will, so after eating most of my food, I returned the way I had come. With only a daypack, I caught several of the backpackers I had met on the way down, and even felt the energy to jog a few flat stretches. The shuttle driver on the way back was much better at his job, singing to himself and telling stories about himself and the Canyon. I lack the temperament to drive the same short route over and over for years, but it was a pleasure to watch someone doing a miserable-seeming job well.

Cope crest from the saddle