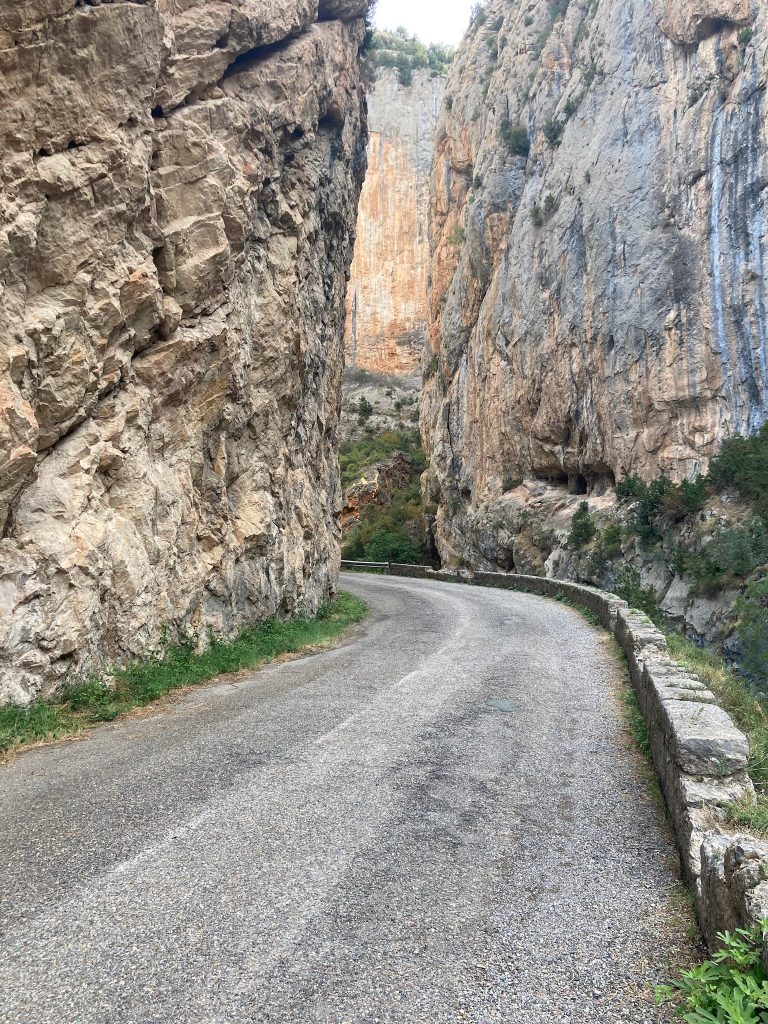 The previous day I had wondered about climbing activity on the limestone cliffs of this Spanish backwater. Soon after starting, I had my answer: the Collegats gorge is a well-developed and moderately popular sport climbing area, with spectacular scenery and routes on both sides of the river, the ones on the far side approached by an intimidating Tyrolean traverse. While the current road goes through a long tunnel, the old road remains as a bypass open to pedestrians and cyclists, with signs along the way explaining the area’s geology and demonology. My first clue that this was a climbing area was the larger-than-usual number of camper vans, including one American-style hashtag-vanlife Sprinter. I saw one pair of active climbers as I passed through, but the area was mostly quiet. 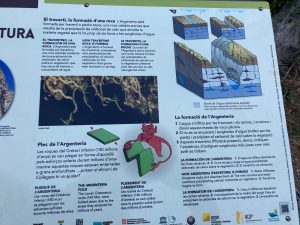 Beyond the gorge, the road continues climbing slowly along the river to Sort, a decent-sized and very crowded tourist town. I stopped there for water and supplies, then began a long and winding climb of nearly 3000 feet to the Port del Cantó. This section is popular with cyclists, and since I was somewhat tired and loaded for touring, got to see several as they passed. One blew by me like I was standing still, impressing me until I realized he was doing hill intervals and almost caught him again during his recovery. Another was a young guy in the middle of a long day, who was riding at about my speed and spoke English well. He turned out to be doing his longest ride ever, something over 100 miles between his family’s and his girlfriend’s house. We chatted for the rest of the climb, then stopped to eat at a scenic picnic table at the pass. 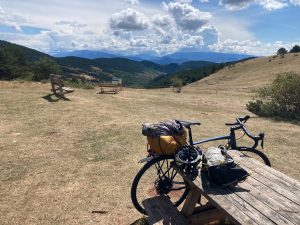 He quickly left me on the other side of the pass, as I had to be cautious before the turns with my less-than-excellent brakes. I eventually made it to El Segre, the river leading southwest out of Andorra. This is the main road, and in winter the only road, in and out of the postage stamp-sized country, so it is broad, crowded, and unpleasant to ride. Though it was warm down in the valley, the night was forecast to be cold and rainy in Andorra, which is mostly much higher. I waited out some squalls in La Seul d’Urgell, first at the Spanish version of a Costco, where everyone from Andorra apparently shops, then outside the tourist office.

I was hoping to make some use of the rest of the day, but it became increasingly clear that camping in Andorra would be cold, wet, and hard to do. Hotels there were also predictably overpriced, so I found a cheap place in La Seul d’Urgell, spread out all my things to dry in the room, then returned to the mega-market to buy supplies for a long and long-anticipated day. For my first hike in over a month, I hoped to tag Andorra’s highpoint, Coma Pedrosa. On either side of that, I had to first ride into the country and up to the trailhead, then back out into France via the Port d’Envalira, the Pyrenees’ highest pass.