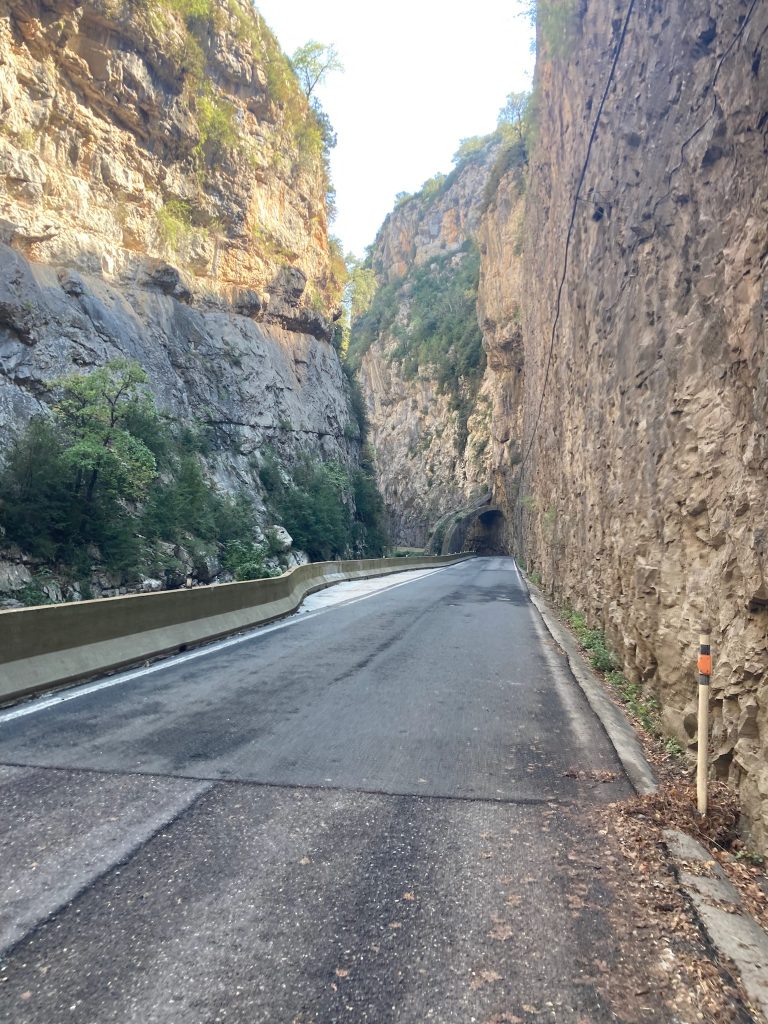 As a highway, I expected the N-260 to be relatively boring and crowded, and so far it had lived down to that expectation. That began to change as I continued east. The road is also called the Eje Pirenaico (Pyrenaean Axis), and while it stays mostly below treeline, it comes closer to the mountains and becomes narrower and more interesting as it approaches Andorra. Leaving Aínsa, it remains a high-speed highway as it makes a long, steady climb through open fields past a bizarre monument consisting of a bunch of giant iron spears and an iron placard saying something about the history of Foradada del Toscar. 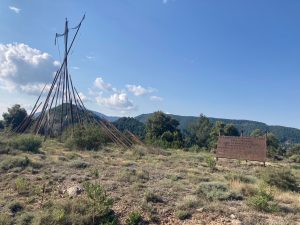 Beyond this climb, the road drops to the Río Ésera near the town of Campo, then follows the narrow river valley north. Here I may have been able to follow a series of local roads directly east, but a combination of uncertainty and my need for food and water led me to continue on the N-260. This was a fortunate accident, as it turned out to be one of the road’s better parts. Following the river, the road climbs through a narrow limestone canyon with many tunnels and Italian levels of determined engineering. There was ongoing construction (this is sadly being turned into an autovia), and a good deal of traffic, but the scenery was enough of a distraction to make the ride pleasant. 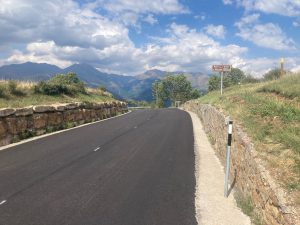 I stopped in Castejón de Sos for lunch, eating my low-quality grocery store food next to a local market. The town seems to be the base of a skiing region, and is the departure point for the dead-end road to Beñasque and the trailhead for Aneto, the Pyrenaean highpoint. That means I must have driven this way in 2018, but it all seemed new to me on a bike. From town, the road makes a winding climb to the Coll de Fadas, then a long and often twisty descent to the Isábena and Baliera Rivers, losing all of the day’s hard-won elevation. Though officially a highway, this section felt more like a country road, narrow and without much traffic. 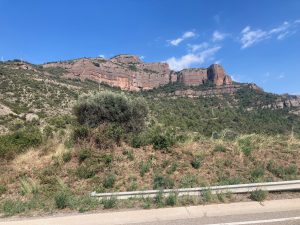 The road became busier where it joined the N-230, heading south for the sizable town of of el Pont de Suert, at the head of a large reservoir. The town is surrounded by orange-and-gray limestone cliffs, making me wonder about the local climbing possibilities (more on that later). It was hot down low, so after buying dinner and breakfast in town, I continued east a short distance, rested in the shade, then continued on looking for a place to camp. I eventually chose an abandoned road to a collapsed stone cottage, where I found a cool, shady spot next to the Riuet del Convent, where I rinsed my feet and face and relaxed on my air mattress. The area had the abandoned feeling common to rural Spain, and camping in the trail of humanity’s retreat felt natural. I thought I was sufficiently out of the way, but I was embarrassed to have a couple of walkers pass on the faint trail next to the river. I was of course camping illegally, but they did not report or chastise me.