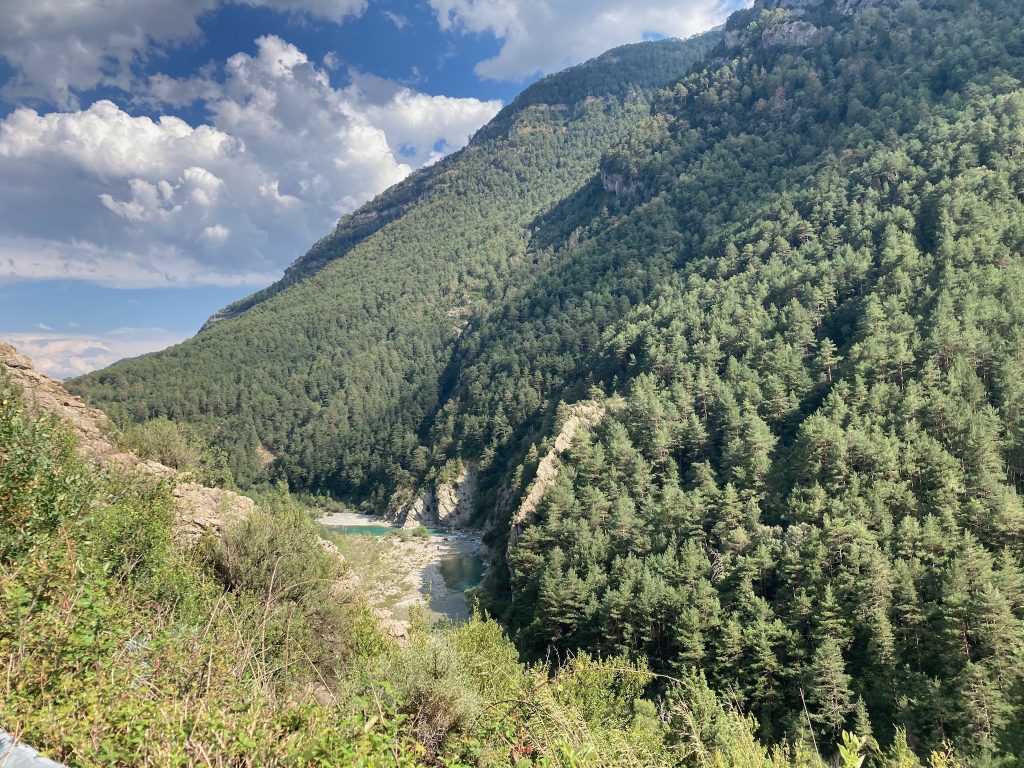 With no hiking to do, I had a lot of time in the evenings to stare at the map on my phone, trying to find the most interesting route east. I had limited time remaining in Europe, but no real objectives, and substantial uncertainty about whether I would be able to hike and run before flying home. Beyond Aínsa it appears impossible to stay in the mountains since, as in Austria, the main roads sensibly avoid them, connecting to the hamlets via dead-end side-roads. I could make good time down in the plains, but that would subject me to heat, boredom, and highway traffic. I eventually decided on a compromise, following backroads to pick up highway N-260 at Jaca, which would allow me to reach Andorra. There I could hike the easy country highpoint, Coma Pedrosa, or at least ride the Pyrenees’ highest pass, the Port d’Envalira.

I started with a quick descent past Hecho, then turned onto a promising side-road leading through the foothills. This was paved but not well-traveled to Jasa (not to be confused with Jaca), a tiny town with a market that seems to be a tourist spot on one of the GR trails. Beyond, the road turned into rough single-lane pavement, then dirt as it crossed an unnamed pass, where it became paved again. I met a few motorcycle tourists, but otherwise this road sees almost no use. I descended to another tourist town, Aísa, then continued on a windy, rolling road to the N-330 highway. I found the names of and encouragement for pro cyclists painted on this stretch, leading me to believe that the Vuelta a España or some other race had passed through. 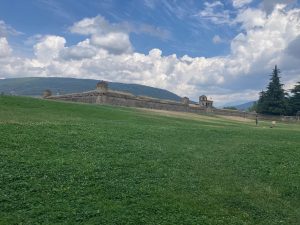 The road down to Jaca was more heavily trafficked, but at least fast, and I reached the city in time to visit the pharmacy and grocery store before the siesta. I ate in the city park near the ruins of an old fortification, then set off east on the least pleasant riding of my visit to Spain, a straight, hot highway to Sabiñánigo. I rested in the shade there for awhile, then continued grinding up a long, gradual climb to some east-west divide. I had not been paying close enough attention to the map, and was surprised to find a mile-long tunnel at the top with no bypass. Biking through highway tunnels is generally neither safe nor approved of, but it was too late to do much about it, and fortunately downhill, so I claimed my lane, put my head down, and cranked through at close to 30 MPH. The descent to Fiscal afterward was even faster. 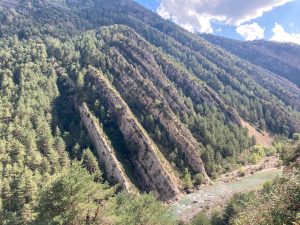 The road north from Fiscal leads to some of the Pyrenees’ highest peaks, but it is a dead-end, and I was on a mission, so I continued over another climb, then descended an interesting stretch along the Rio Ara to Boltaña. The river and road cut through uplift layers of limestone which are eroded and partly forested. I was ready to camp there, and did not want to hunt for a hiding-spot, so I rolled up to one of the campgrounds ready to pay. The girl working at the reception desk was embarrassed when she told me the Swiss-level price, shockingly expensive for Spain, and was not surprised or put out when I declined. I instead continued a few miles to Aínsa (not to be confused with Aísa or Ansó), where I found a cheaper campground outside town to the northeast.