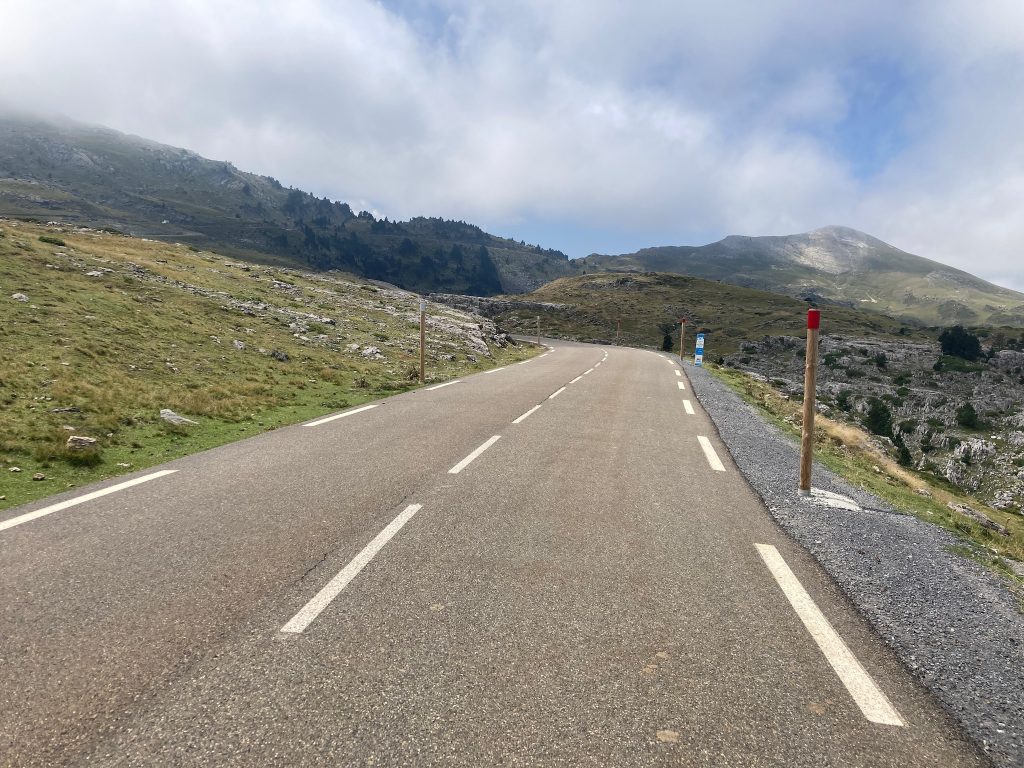 [This is catching up on the tail end of summer. Also note the new map of my “Alps bike tour”. — ed.]

I was tired of cycling, tired of rain, and just plain tired, too much so to enjoy riding more in the Alps. After a final climb to Alpe d’Huez, I rode down to Grenoble and recovered for a few days, then took a series of trains to Pau, at the base of the Pyrenees. Unlike my train-warp across northern Italy, which had been cheap and easy, this one was unpleasant and expensive. Europe’s high-speed trains, like France’s TGV, do not have bike compartments, so you must partially disassemble your bike and transport it as luggage. The accepted method is a specialized bike bag, which I of course did not have. I instead took off the front wheel and bars, then wrapped my bike in bubble-wrap, which was against the rules but got me to my destination, at the expense of several miserable transfers. Once finally in Pau, I bought some food and rode south until I could find a stealthy spot to camp. 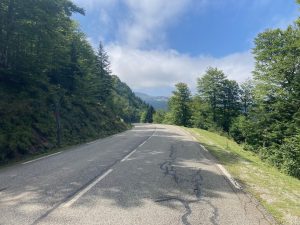 Weather comes from the north in the Pyrenees, and their northern side is remarkably humid and mossy even when it is not raining, so I wanted to get to the south side as soon as possible. Plus, Spain is much cheaper than France. There are a couple of passes over the mountains near Pau, and I chose the Col de la Pierre Saint Martin at random. This turned out to be one of the better passes I rode in the Pyrenees, with a long climb through lush woods and old towns culminating in a narrow, winding road through limestone channels. Since it does not lead to a major Spanish city, and there is an easier highway pass to its east, it does not see much traffic outside the ski season. 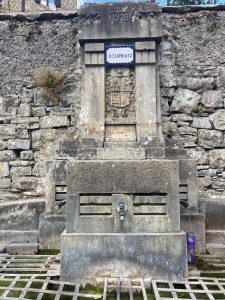 On the Spanish side, the road plunges impressively through more limestone crags into the Ezka valley, with a rare curlicue along the way. This is Basque country, so the towns all have both Spanish and Basque names, with the former sometimes crossed out in spray-paint. Basque is a linguistic orphan unrelated to its neighboring Romance languages. While it is impossible to puzzle out the meaning of its words, one can often see the correspondence between them and their Spanish equivalent place-names. Beyond that, though, they’re a salad of x’s and k’s, often starting with an “a” or “e” and ending in an “i.” They seem more pronounceable than Polish or Welsh to someone who speaks neither, but what I heard in my head was probably completely wrong. 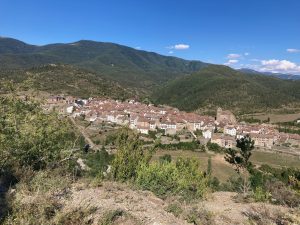 Unlike the Alps, which are a complex blob, the Pyrenees are a fairly simple range with an east-west spine. By chance, I had started near the western end of the highest part, with the range quickly falling off into the Basque Country to the west, and also getting much wetter as they approach Spain’s northern coast. Wanting to stay dry, I decided to follow the foothills east, then cross back over to France when I ran out of time. I therefore descended the Ezka valley to Roncal/Erronkari, then turned east along a provincial road. My friend Mike had made me aware of the miles of quiet, paved roads in the Spanish countryside, and this one did not disappoint. The pavement was rough in places, but I found a pleasant, rolling ride through the foothills. I stopped for supplies in Ansó, an ancient town closed to most cars, then rode on to camp off a forest road with a view of the foothills tapering off into the plains to the south.

Church in Arette, I think

Bears and Spanish not welcome