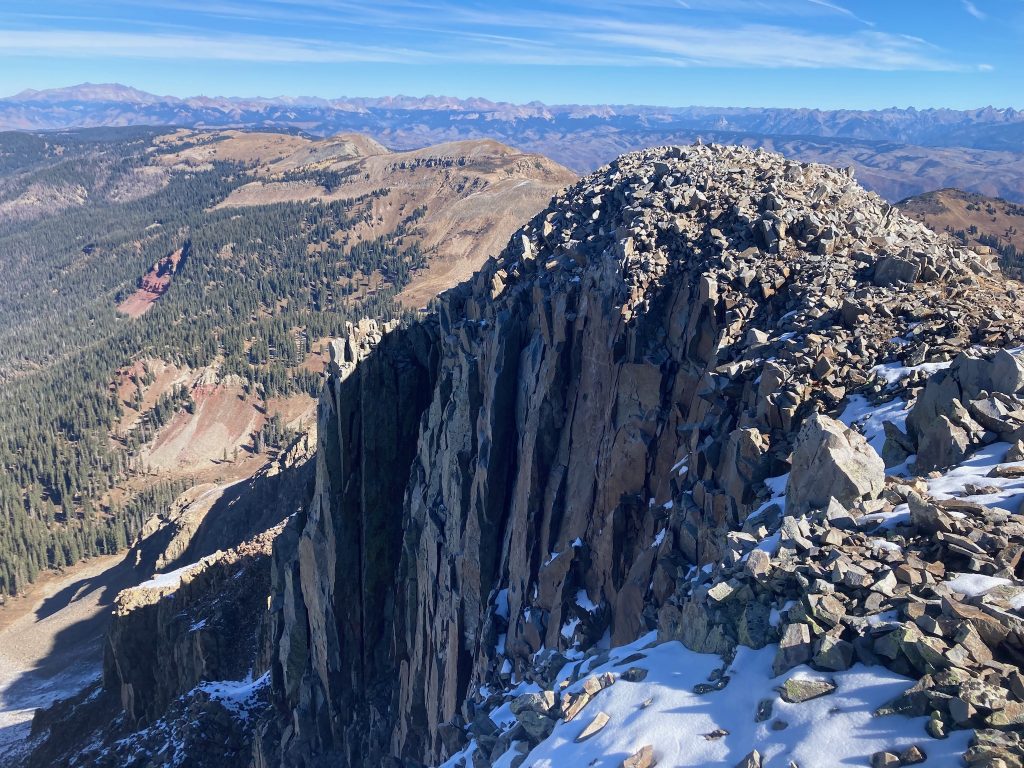 In the interest of completing more of the ridgeline around the upper La Plata River, I rode up to the junction of Basin Creek, then locked my bike to itself to hike the rough jeep road to the Little Kate Mine. From there, a decent road and older, steeper pack trail lead nearly to the saddle just southwest of Diorite Peak’s summit. For some reason neither the road and trail, nor the two prospects they access, appear on any maps of the area. Beyond the saddle, some easy ridge with traces of what might have been an old trail lead to the summit. Just below the highpoint to the east, I found a pair of cairns with a piece of red webbing mysteriously strung between them.

I took in the views of higher and more rugged peaks to the west, from Babcock and Spiller north to Sharkstooth (supposedly a terrible choss-heap). I also looked north and east to my intended route toward Indian Trail Ridge and upper Cumberland Basin, then sat down for a snack. Finding I had no energy, the snack turned into the familiar late-season ritual of eating all my food, taking a nap in the sun, and plodding back home. I only had a couple more days before the season’s first real storm hit the San Juans, but was having trouble making good use of that time.

Mine above Little Kate 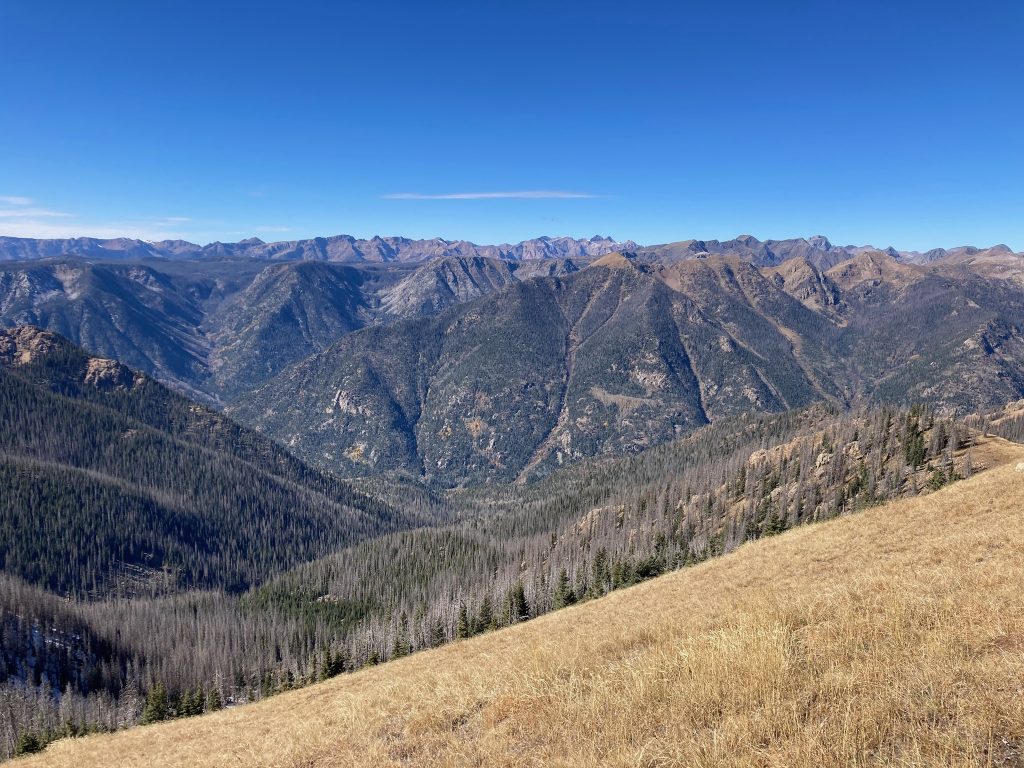 I had hoped to get a pre-dawn start for a final trip into the Weminuche, but realized that was not happening. Instead I slept at the Durango Walmart, then drove over to Pagosa Springs for a lesser peak I had been meaning to visit for some time. Graham Peak, on the east side of the deep Los Pinos valley, would hopefully have a good view of the central Weminuche I had hoped to visit. It would also involve a decently-long 70-mile bike ride instead of a headlamp-to-headlamp death march, something I thought I could handle.

I parked at the Turkey Springs trailhead a few miles northwest of downtown Pagosa, then got a leisurely start riding along the dirt CR 600. This road sees an unpleasant amount of traffic in the first few miles, and is therefore somewhat washboarded, but soon grows quiet, and remains remarkably well-graded for many miles. It seems to exist for the sake of a seasonal cabin-rental place and a handful of ranches along the Pagosa River’s tributaries. Oddly, it apparently peters out some miles south of Graham, with none of my maps showing any road connecting back south to Highway 160.

The road was mostly fast riding to the Weminuche Ranch, where it becomes slightly rougher as it climbs out of the valley. However, it is still well-built enough to have signs warning of sharp curves, and to be passable for a passenger car with a bit of care. I rode to where I thought I should start hiking, at a rough side-road southeast of the peak, then looked at my map and realized that the track I had downloaded started up the Pine-Piedra Stock Driveway a few miles on. This seemed longer, and in retrospect the first road would probably have been faster, but I was not sure how dense with brush and blow-downs the woods would be.

I locked my bike to itself and found that at least the lower part of the trail was being maintained by hunters. There were fairly fresh horse-prints, and logs that had been sawn within the last few years. This maintenance ended partway to the ridge, but the ground was mostly open from there. In keeping with the area, the geology was interesting and varied: the various volcanic stuff around Pagosa Springs gave way to uplift limestone, which was in turn replaced by the Needles’ pink kitty-litter granite along the ridge. I found some old sawn logs and bits of trail along the ridge, but the trail on the USFS map has been re-wilded. Fortunately the ridge is only occasionally brushy, so it was an easy walk to the summit. Graham is unfortunately too far north and east to see the impressive crags at the Los Pinos valley’s mouth, but I did have a good view of the San Juans, from the Endlich Mesa peaks, to the Needles 14ers, to Rio Grande Pyramid. I sat for awhile taking in the view and reflecting on the end of my summer season, then reversed my steps and pedal strokes back to the car. 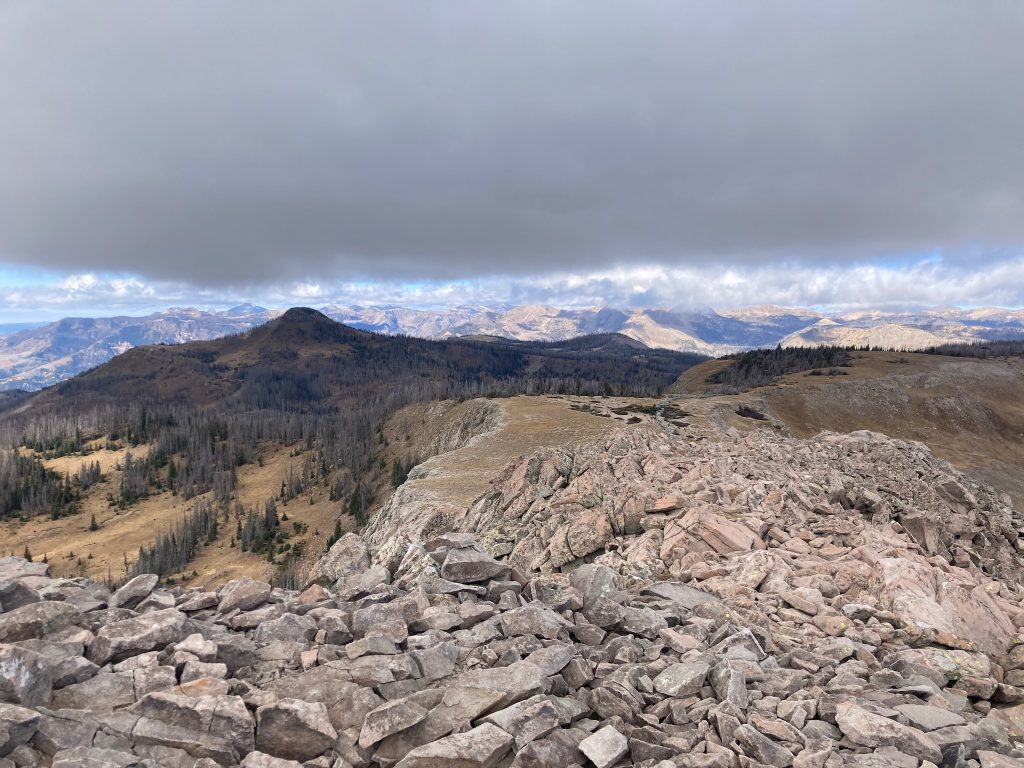 With cold and wind in the forecast, I looked for some easy nearby peaks to jog, and happened upon Alberta and Treasure near Wolf Creek Pass. Alberta is the highpoint of the ski area, while Treasure is a nearby summit with 1000 feet of prominence. From the pass, it is easy to follow the PCT along the ridge almost to Wolf, where a short spur leads to the summit. The cloud deck just above the summit did not obscure the views, but the eyeball-freezing wind prompted me to keep moving.

The signed Treasure Mountain Trail is in decent shape down to a jeep road at the saddle between the PCT and Treasure, but is built for mountain bikers, so it tries to be as long as possible in a limited area, with pointless meanders and wrong-way switchbacks. I cut it where I could, then continued up the ridge toward the peak. Any semblance of a trail quickly fades here, and while I found a few boot-prints, I also found endless brush and blow-downs. The summit had a decent view down into the San Juan Valley toward Pagosa, but it was too cold to linger. I tried to cut more directly northeast to the jeep road, and was suitably punished by even worse deadfall. Not wanting to climb back to Treasure Pass, I followed the network of jeep roads back to the highway, cutting some corners with what turned out to be slightly more and worse bushwhacking than I had hoped. Still, it was better than climbing back to the PCT, and made for some pleasant running on the low-angle roads. 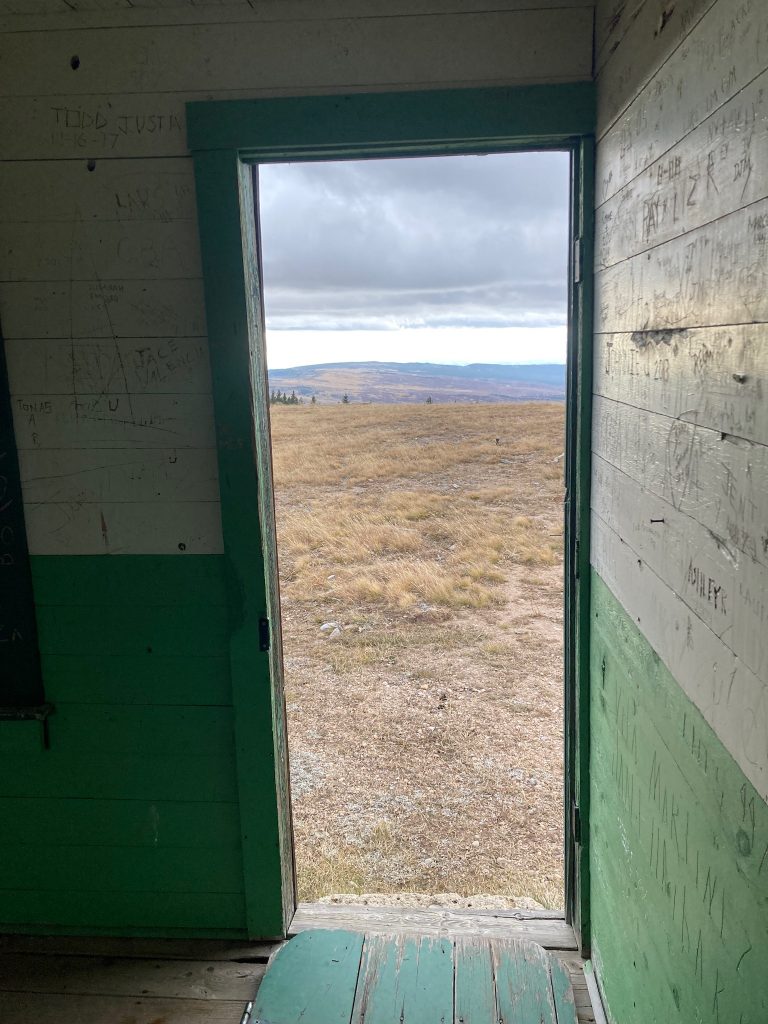 As a final bit of end-of-season business, I added a bike-n-hike of Canjilon Mountain, a prominence point and former lookout in the wilds of northern New Mexico. It is hard-core hunting season, and I passed several trailer encampments, some with ATVs parked outside. I did not see any people actually hunting, however, and the few I met seemed happy to see a runner/biker out in the woods. The Forest road from Cebolla to Canjilon Lakes is mostly fairly smooth, so it was an easy ride to where a small road turns off to climb Canjilon’s west side.

This lesser road would have been partly bikeable on a more capable machine, but I stashed mine near the base and jogged the road. I met an old-school Jeep coming down, and saw an FJ parked partway, but of course had the upper mountain to myself. The road is officially closed a half-mile below the summit, but people still take their ATVs around the closure sign. The summit lookout is long gone, but the old cabin remains, minus windows and with the usual graffiti, including an amusing feud between pro- and anti-Trump forces. It was bitterly cold and windy on top, and I could see snow squalls to the northwest and south, so I wasted little time before running back down to my bike and coasting to the car. Winter has not quite arrived in northern New Mexico, but it is approaching the time to head south.

This entry was posted in Colorado, New Mexico. Bookmark the permalink.