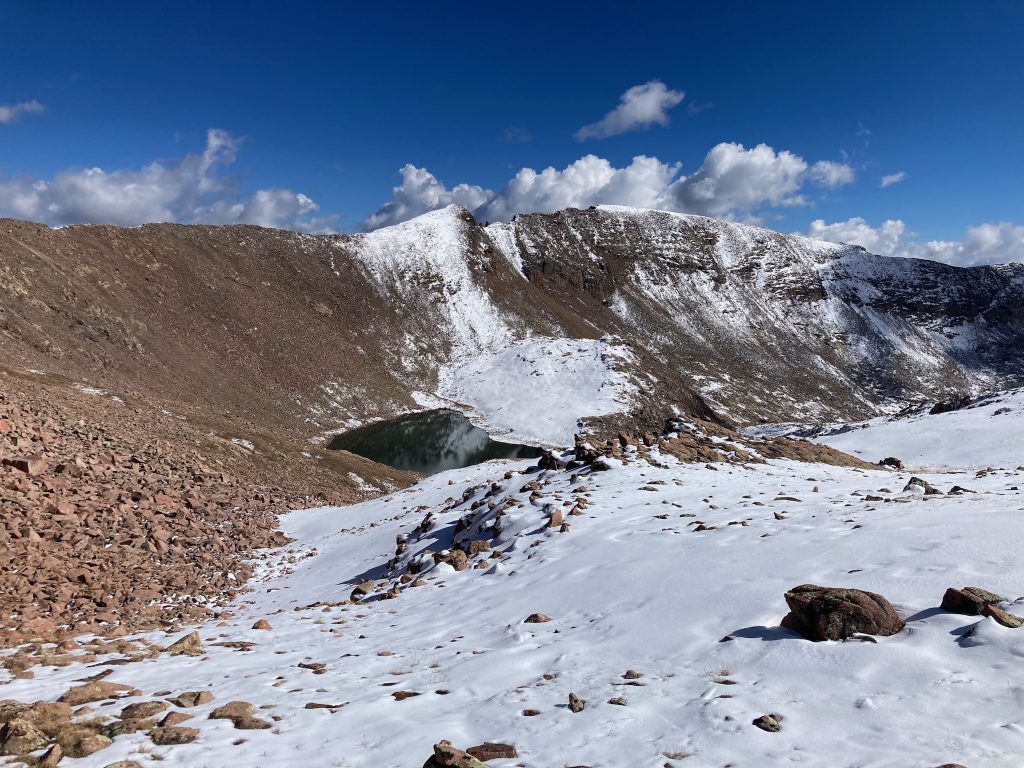 Several of my remaining Weminuche 13ers are unfortunately “orphans” I skipped on various long dayhikes, meaning they are both deep in the wilderness and cannot be easily combined with other peaks. Of these, Peaks Eleven and Twelve are probably the most interesting, and could be combined on a loop of Chicago and Ruby Basins out of Purgatory, but the short days and recent snow put that long grind out of reach for this season. Two others, Valois and Peak Twenty-Two, are only a couple miles apart in the less-visited southern Weminuche, so I thought I might be able to combine them. I have previously reached the area from the Endlich Mesa trailhead, but I do not have the vehicle to drive that road, or the energy to hike it again. 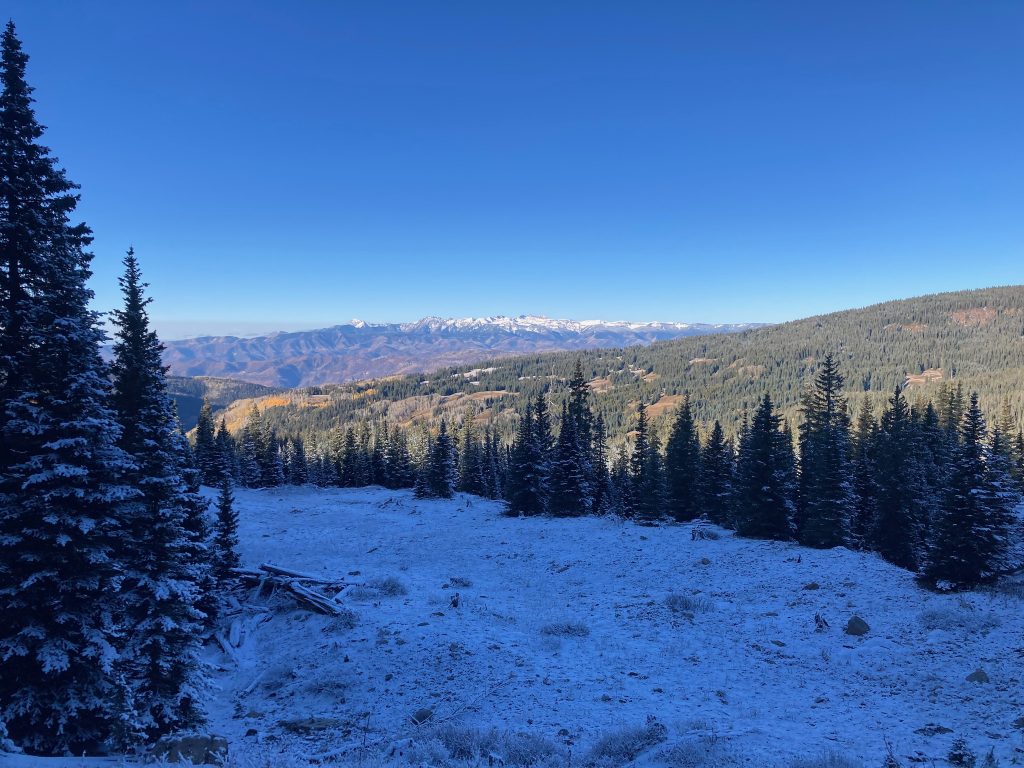 I decided instead to come in from the Lime Mesa trailhead to their southwest. This is a ridiculously long drive on dirt roads, and not worth repeating, but it is easy driving for any car up to Henderson Lake. I started the drive in the evening, finished it in the morning, then hung out until around 8:00, when it was finally warm enough to ride with mitts and a down coat. It is peak redneck season in Colorado, the time to harvest meat and wood between when the hikers leave and real winter sets in, so there were several large, aggressively-styled trucks with horse- or ATV-trailers parked at various pullouts. 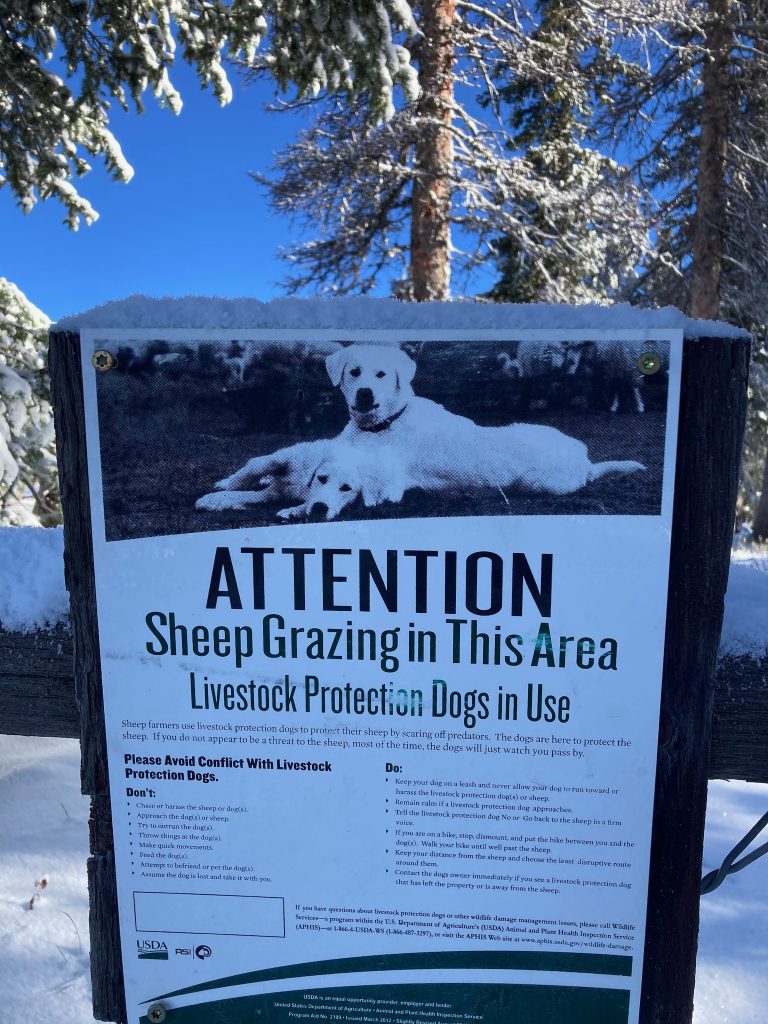 Maybe they won’t chew your face off

The road remains decent for a few miles beyond the lake, then deteriorates into a mix of slabs, jumbled rocks, and ruts. I had to push my bike in a few sections. I was impressed to see a bad-ass old Mitsubishi van parked at the top of the final climb, which looked like Jeep terrain. I sort of wanted to meet its owner, but he seemed to be just waking up, and you don’t disturb someone in their home like that. The road remained terrible as it rolled across the mesa to the trailhead, and I debated stashing my bike, but pushed and carefully rode all the way to the trailhead, where I found two stock-looking Tacomas. Clearly my judgment of what a vehicle can handle has become poor. 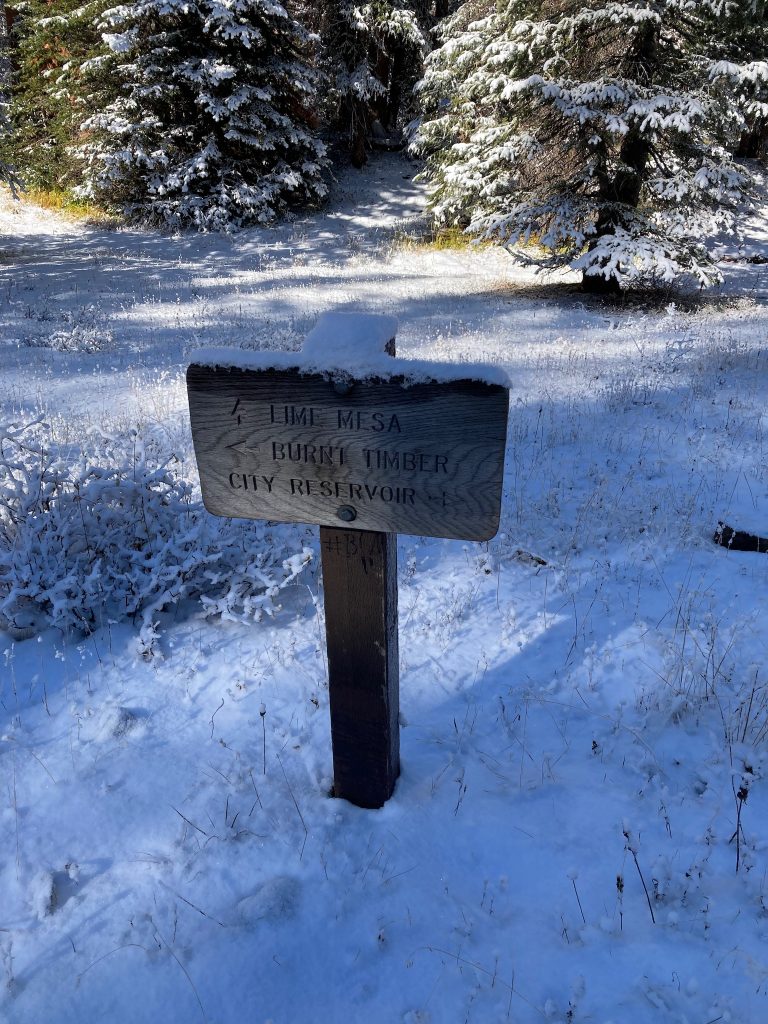 I stashed my bike in the trees, then started out north along the Lime Mesa trail. There were a couple sets of footprints in the fresh snow, but they seemed to be going out and back, so I did not expect to meet anyone. I soon turned east on the City Reservoir trail, which joined the Burnt Timber trail to meander east toward said reservoir through gentle ridges and valleys. I saw a large tepee-shaped tent in the woods off the trail, and was surprised not to see a horse to carry it nearby. Soon after, I spotted a hunter couple talking to each other on the trail ahead. I half-waved as I approached, but they did not notice until the woman turned around and startled. I found it funny that they hoped to track and surprise an elk, but had not noticed a middle-aged guy traipsing along the trail listening to a podcast. 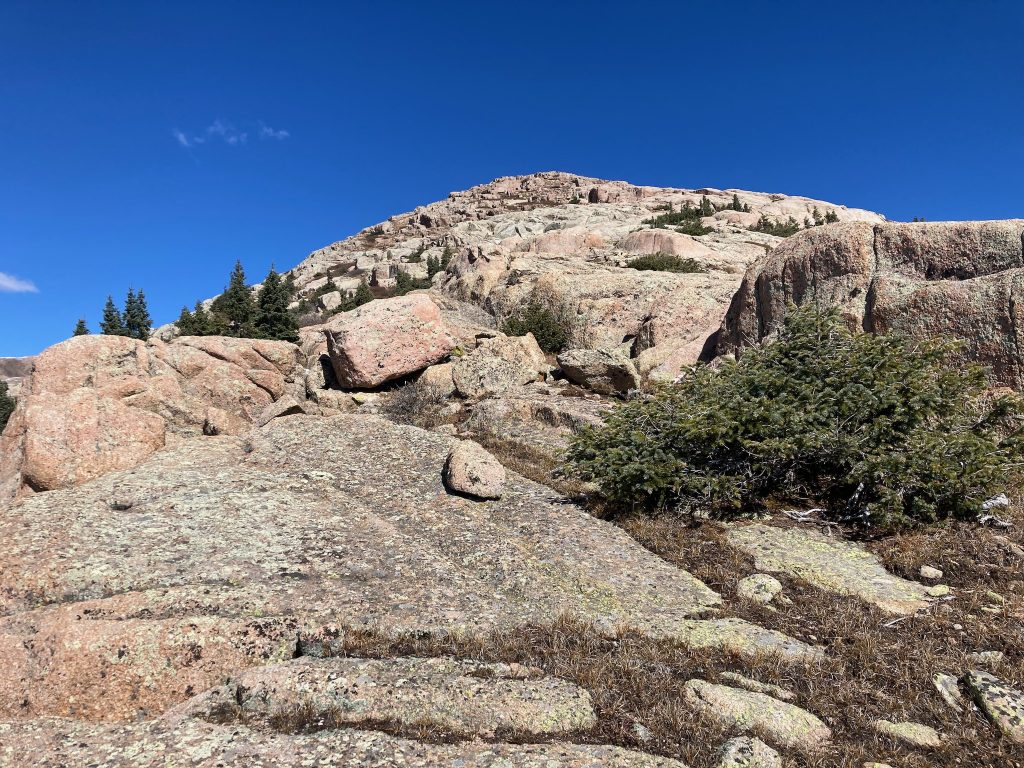 The human tracks soon gave out, and soon after I saw fresh tracks of elk using the trail, though I neither saw nor heard the animals themselves, despite passing through several meadows that seemed like ideal places for bull elk to scream their aggression and lust. I eventually reached the reservoir, noting that the hike from Lime Mesa was only about a mile longer than from Endlich Mesa. I continued up the trail toward Lake Marie, then left it near Logtown (a very Mad Max-sounding name) to make my way up Valois’ south ridge. I found an old trail at the start, then followed a mix of game trails and common sense through the grass and granite outcrops to the upper talus. I felt pathetically slow on the climb, weakening my will to add Twenty-Two to the day. 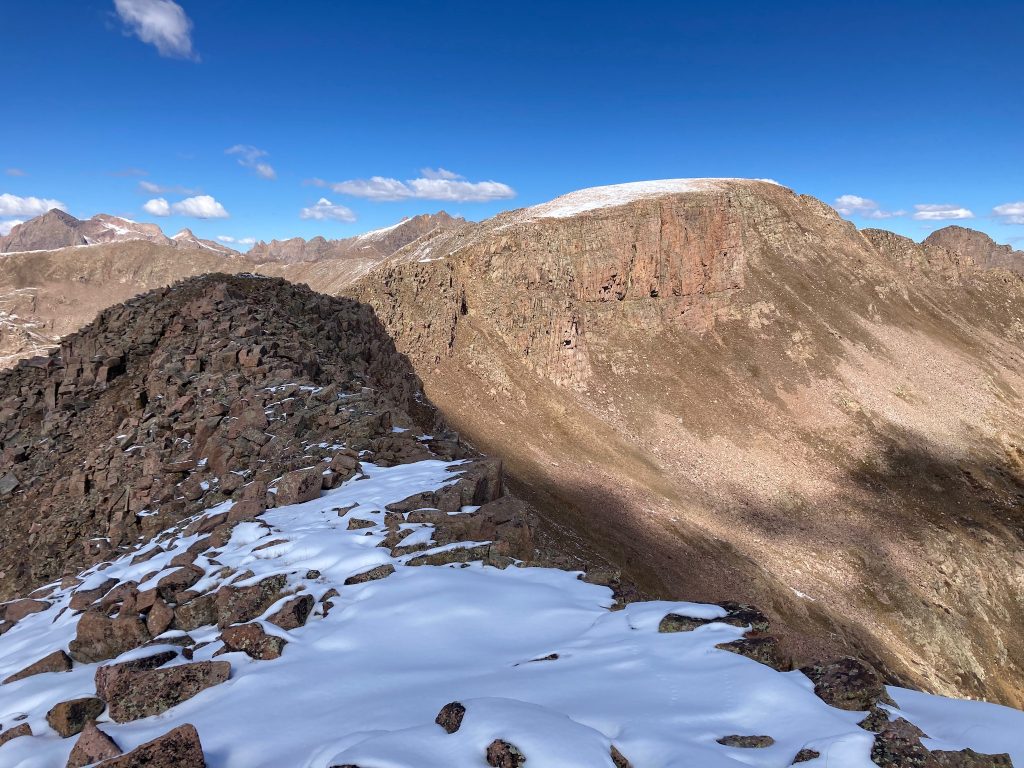 Valois’ summit plateau is connected to a false summit by a narrow catwalk, which I enjoyed despite the lingering snow. Once past this bit of fun, it was an easy plod to the summit cairn. The peak is utterly unimpressive from this side, but its steep north face is more dramatic, and it has an excellent view of Johnson Creek to its north, bounded by the Grizzly-McCauley-Echo ridge, descending to the deep Vallecito. I looked across Castilleja Lake toward Peak Twenty-Two, but it was hard to even pick it out among the Emerson Peaks and other unnamed bumps. I lacked the will to put in the work to tag it, especially since my late start would put me at risk of a headlamp bike descent. 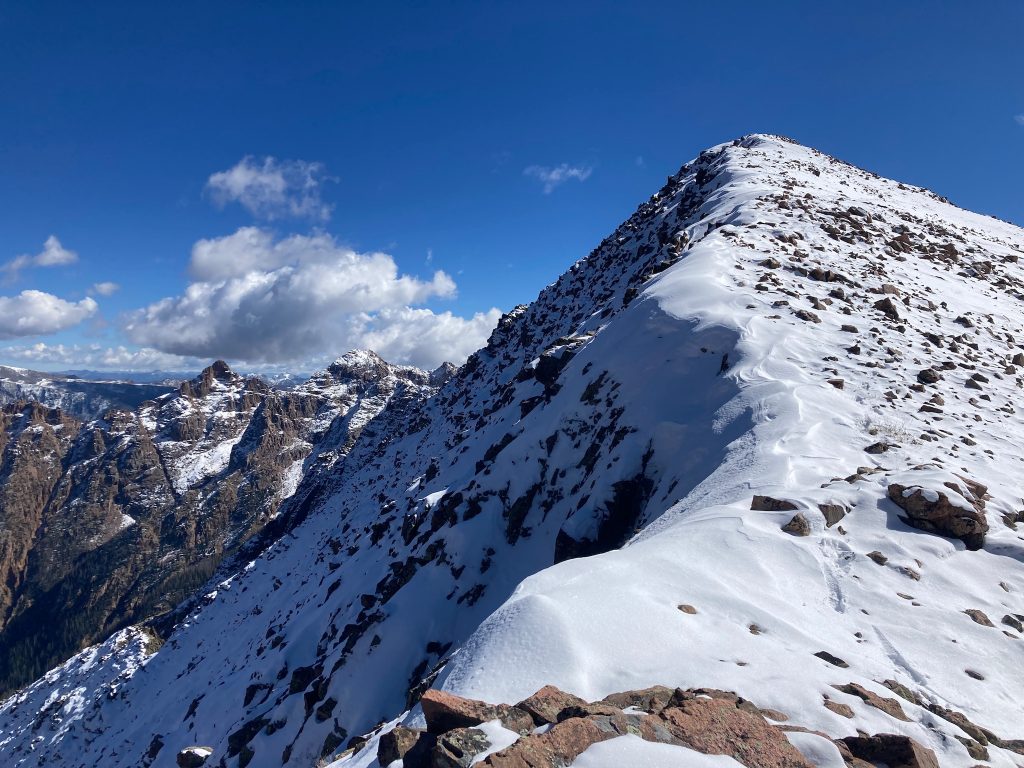 I decided instead to make a loop, traversing over Florida and Bullion to Mount Kennedy before returning to the trail via what looked like easy terrain on West Silver Mesa. The ridge to Florida started out miserable, with slick talus lubricated by fresh and softening snow. In my worn shoes, it made for tedious and cautious climbing, moving crab-style along the ridge. At the saddle, the ridge turned so that the snow melted, and the minor climb to Florida was much easier. From its summit I could clearly see the Trimble Pass trail, covered in snow, traversing toward Columbine Pass. I also saw a well-trodden elk- or sheep-path near Lillie Lake to the south.

I followed what might have been a faint trail to the pass, then climbed more easy talus along the ridge to Bullion, another unranked 13er. I had already somehow done Aztec on a previous outing up Johnson Creek, so I skipped the tricky ridge, dropping to the grassy plain to its south. The descent off Bullion was the day’s misery crux, a steep slope of large, shifting talus covered in slick snow. Too many things moved that should not have, and even crab-walking, one boulder bit me on the back of the calf. It shredded my pant leg, but fortunately I was wearing tall socks, so I got off with no more than a small bruise on my Achilles. 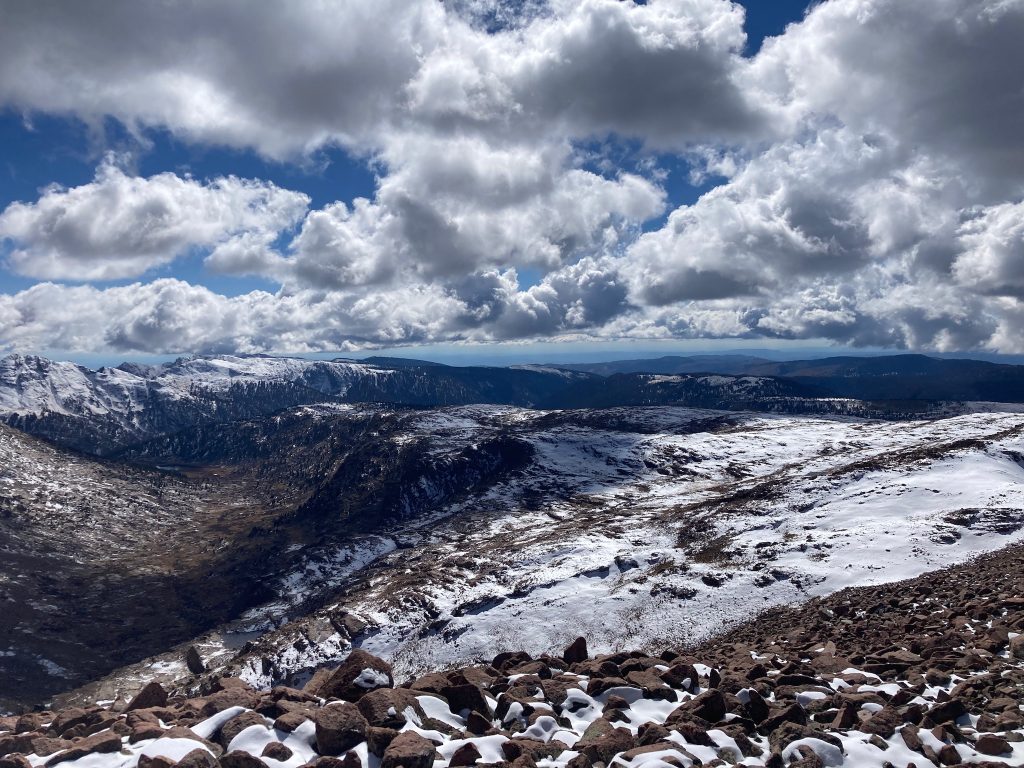 Relieved to finally be on low-angle grass, I was heard rushing water, and was surprised to find an old pipe sticking out of the ground, with water still burbling out. I saw a tailings pile below the Bullion-Aztec ridge, but no ruins of a building or other detritus nearby to justify the effort of improving this spring. I stopped to fill my water, then hurried on with an eye on the increasingly serious-looking clouds to the south and east. The forecast had called for a slight chance of showers, and it seemed increasingly likely I was going to feel some precipitation. 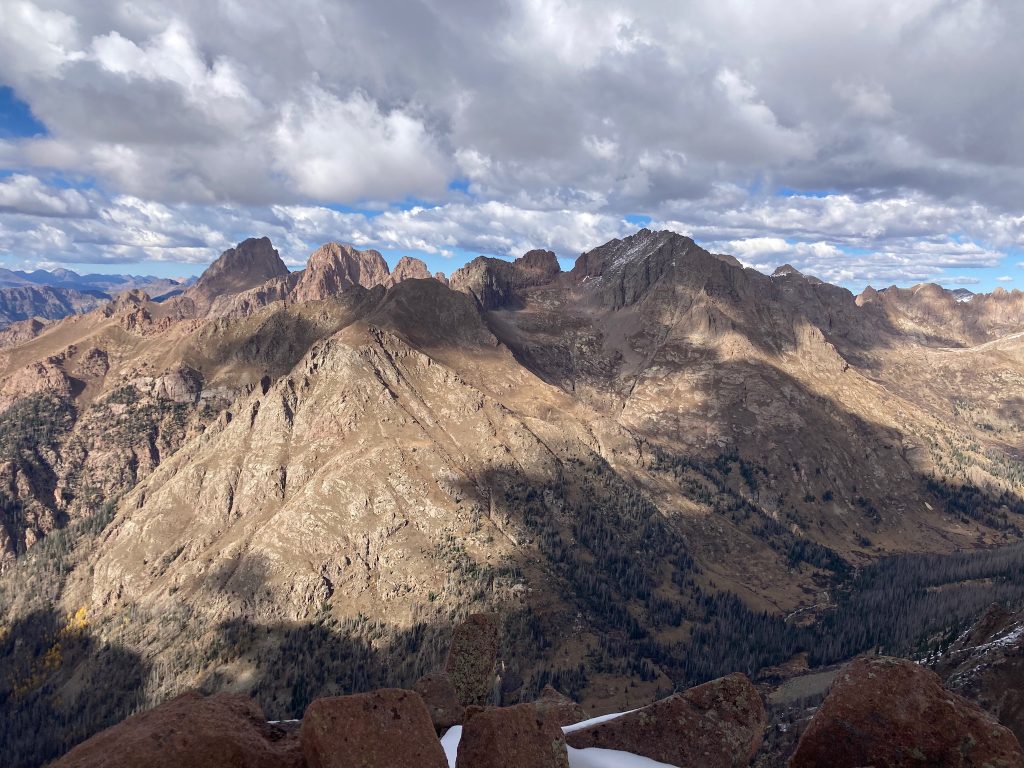 Kennedy has an exceptional view of the central Needles, from Pigeon to Windom, and I took some time to admire and photograph them in the dramatic partly-cloudy light. It also has cell service, from which I learned that a couple of prolific Colorado peak-baggers had been just behind me on my White Dome excursion a couple days earlier. The weather was deteriorating as I descended West Silver Mesa, but fortunately the travel was as easy as I had hoped, with mostly open country and very few willows. I was surprised to find quite a few more boot-prints on the trail, but met no one on my return to the trailhead. 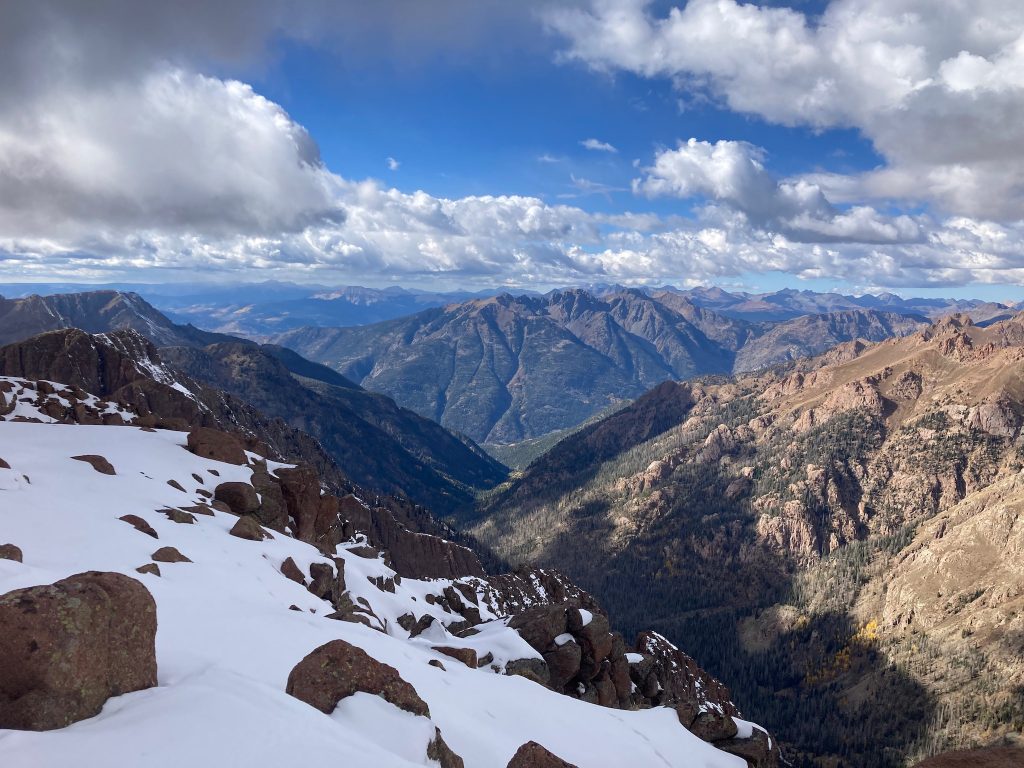 It started graupel-ing a couple of miles out, and gradually grew more intense. I was not looking forward to the ride back to Henderson Lake, especially since the clay-rich soil had turned to slick mud. The two trucks were still at the trailhead, and the Mitsubishi van’s resident waved as I passed, riding cautiously over the mix of mud and limestone. I was impressed at how well my bike’s tires handled the surface, despite their lack of aggressive tread. I initially tried to avoid the puddles and the worst of the mud, but gradually gave in to the fact that both me and the bike would be filthy no matter what. My hands ached with the cold, and I needed to get back to the car before dark. 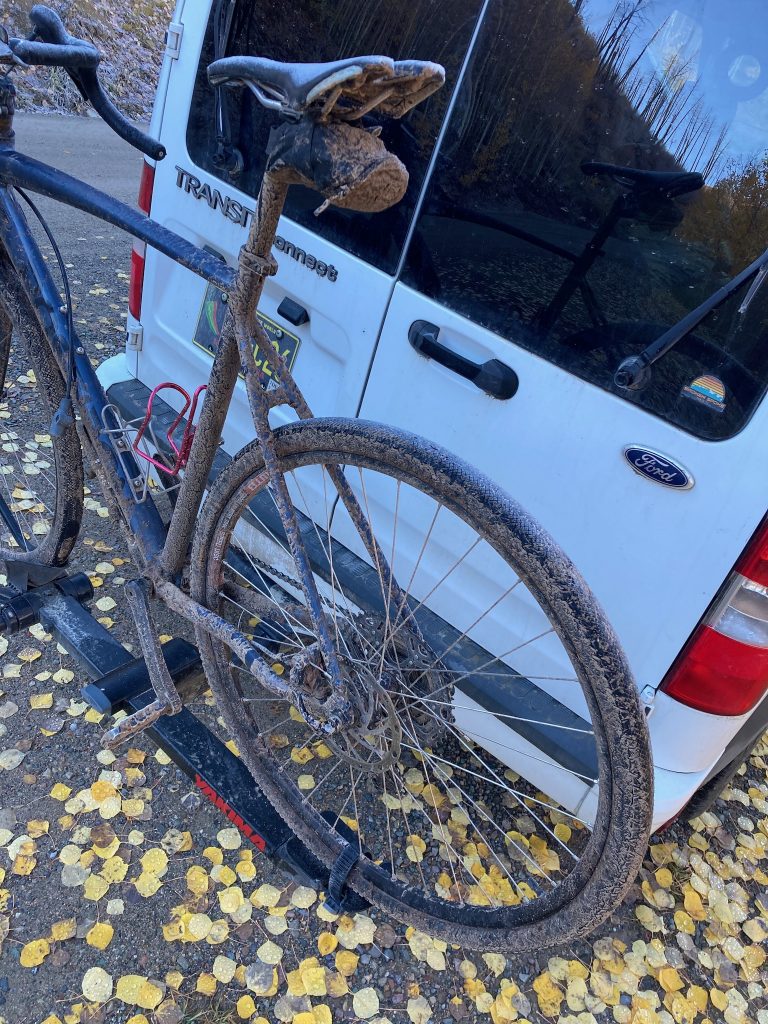 I managed to ride most of the upper rocky section, picking my way cautiously and riding the brakes. I put on a bit more speed on the lower, smoother part, as the graupel turned to rain and my brake pads wore down from the grit. Finally reaching the car, I leaned my bike against the side to deal with later, and was happy to find I had just enough manual dexterity to unclip my keys from my pack and unlock the doors. I crawled inside, frantically stripped off my wet clothes, put on a dry t-shirt and sweatshirt, started water for cocoa, and curled up in my sleeping bag. I had a painful ten minutes as my hands came back to life, but suffered no permanent harm. I made dinner, read a bit about Harvey Butchart, then went to bed early, leaving the problem of dealing with my wet, muddy bike and clothes to the next day.

Maybe they won’t chew your face off