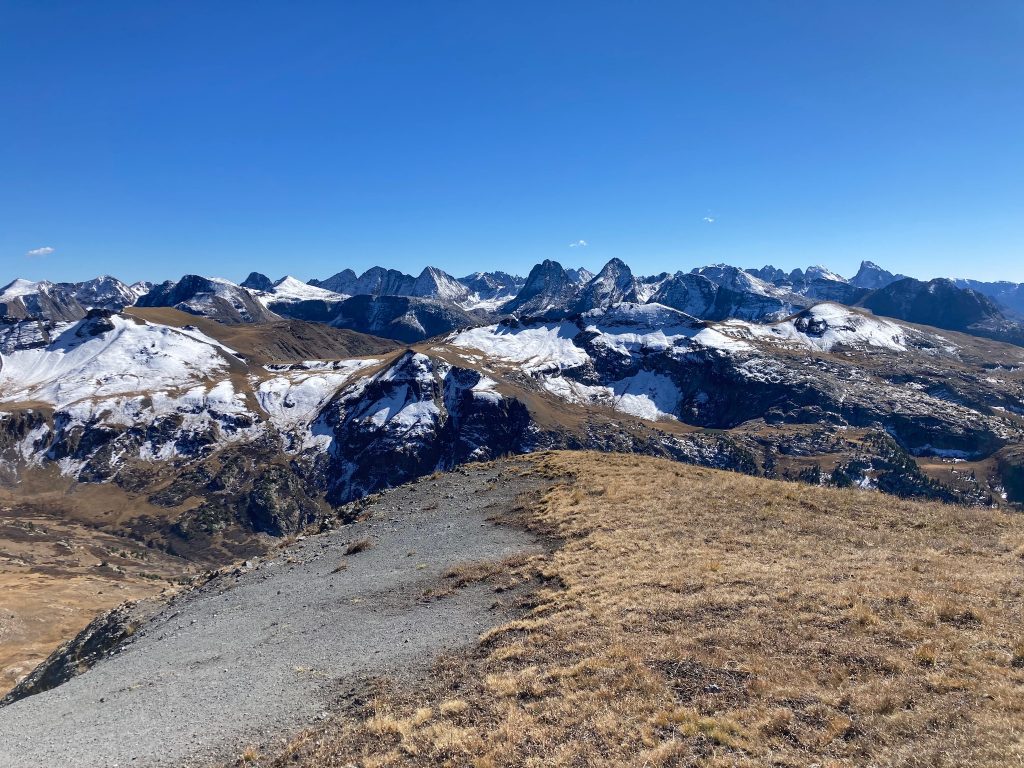 Grenadiers and Needles from 13,109

After a fair amount of driving and chores, I did not have time to prepare for anything ambitious. Looking around at my remaining Weminuche 13ers, I saw that a subpeak of Snowdon called “N 2” would be an easy hike. I drove up to Andrews Lake near Molas Pass and slept in the overnight lot, then got a semi-lazy start. I followed the trail away from the lake for awhile, then left it at the trail register to follow a use trail past a small pond and into a meadow that is probably a bog most of the time. Here the trail faded, and I picked my way through the remaining sogginess to the woods. 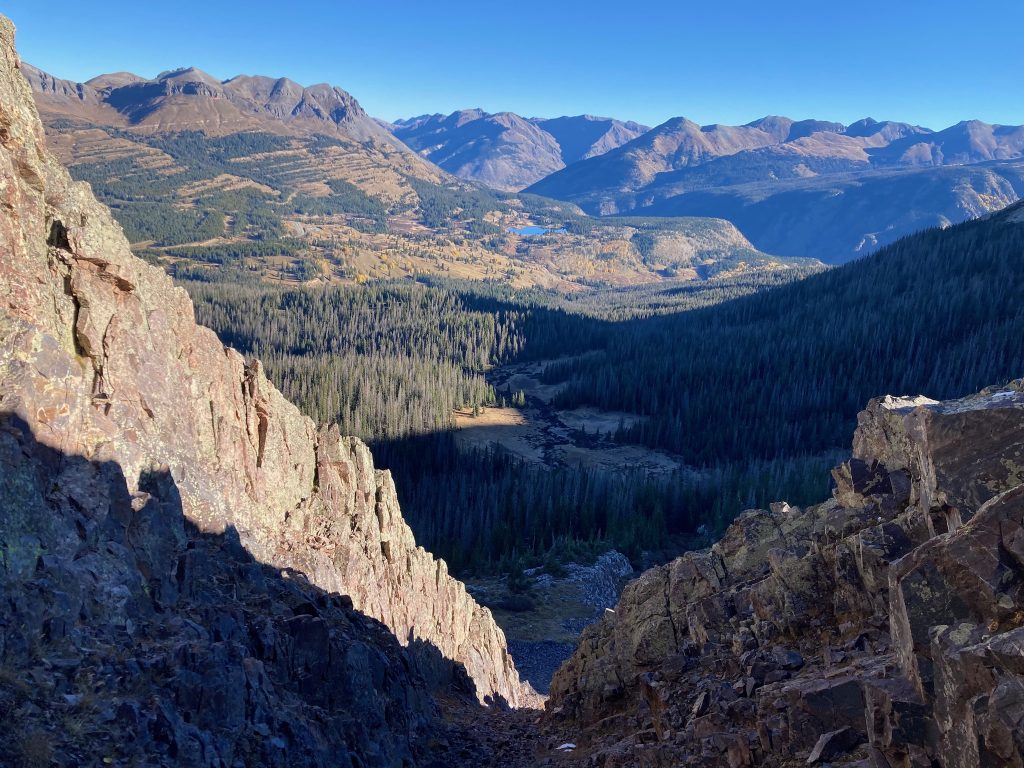 I was not sure what route to take, wandering more or less toward Snowdon and debating whether to follow a northwest spur ridge or aim for the saddle between Snowdon and N2. The woods were mostly open and easy, but as I neared the peak they got steeper and brushier, leading me to choose the ridge. I found a chute leading to a cleft that got me to the crest with nothing harder than third class, then made my way through fields and easy krummholtz on the other side. The ridge connecting Snowdon to N2 looked rugged and rotten, making these two neighbors slightly annoying to combine. I hopped up boulders leading south of the notch, then picked my way across a bit of annoying snow to the summit. 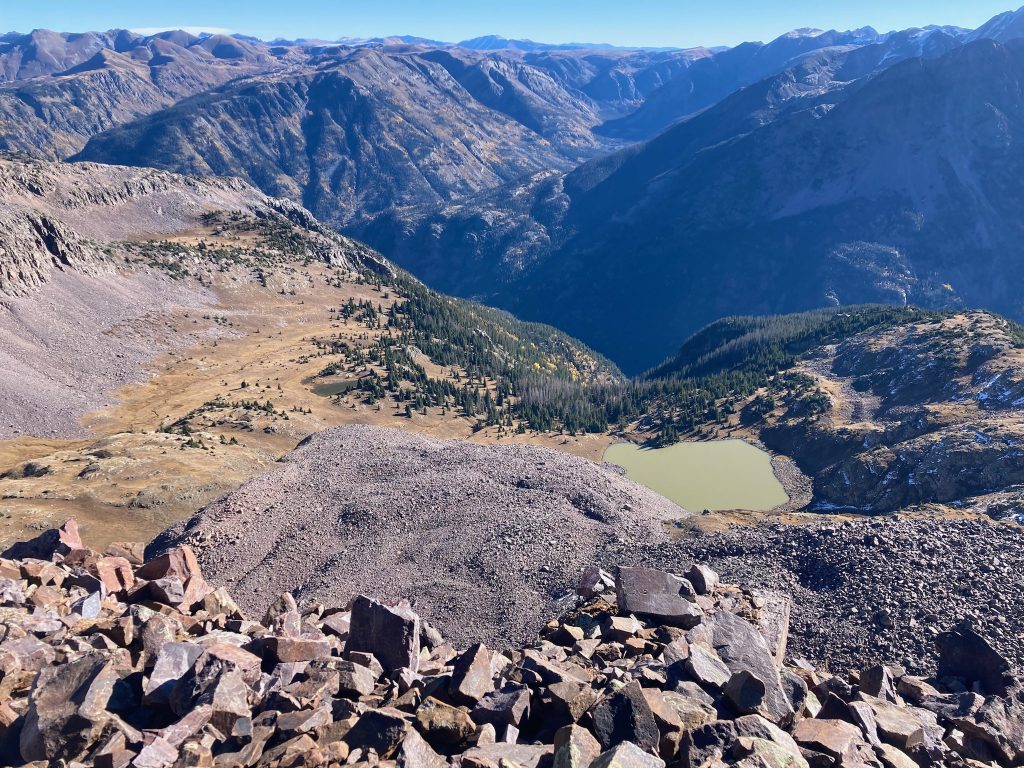 The best views are across the Animas to the east, but the morning sun washed them out. On my side of the river, I saw a silty lake at the tip of a rock glacier, and Snowdon looked impressive to the north. To the west were the impressively colorful Engineer and the peaks of the Telluride-Ouray crest, from Golden Horn and Pilot Knob to Sneffels. I retraced my route to the base of the final boulder-slope, then took the bowl north of the northwest ridge back toward home. This was mostly easier than my way up, with only a bit of obnoxiousness in the woods, and a surprising little slot canyon just before the open meadow. 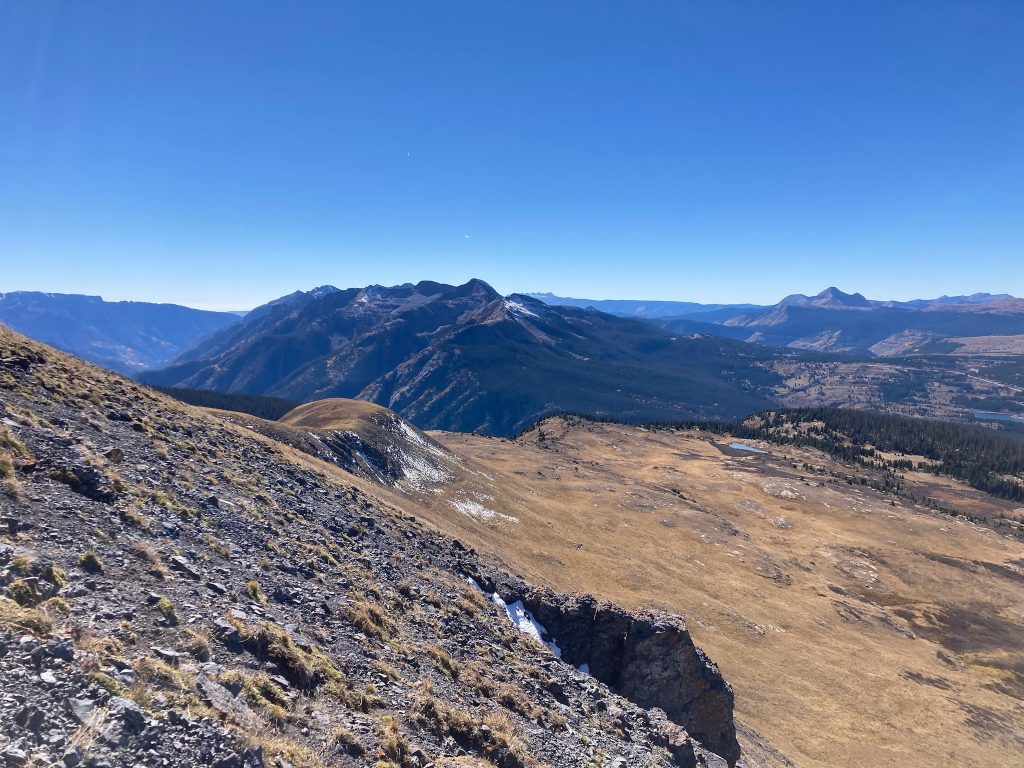 I was back at the car with too much daylight left, so I drove into Silverton to bag Peak 13,109, an undistinguished 13er south of Kendall Mountain. I parked at the base of the dirt road and took off on my bike, happy to gain fitness rather than damage my car on the rough road. The road was far too much for my car anyways, and even too steep for my gravel bike and mediocre bike-handling skills in places, but it was faster and far more enjoyable than hiking or jogging. I stashed my bike in the woods on the final climb up to Deer Park, then hiked the Whitehead Trail past a couple of trucks and a blocked mine. I had eyed this trail as an alternative approach to the northern Weminuche, but now that I am aware of the Cunningham Gulch approach, I see no reason to use it.

I left the trail where it crosses the steep open slope west of the peak, picking my way up tussocks and hardpack to the ridge. From there, I could follow a well-made game trail around Point 12,829 and on to the summit. Though separated from the Vestal Basin peaks by two ridges, I had a clear view of their north faces, which were largely coated in snow. With the low mid-October sun and short days, this would not melt before next Spring, making their standard routes somewhat adventurous. My work done, I returned to my bike via a slightly less steep route that followed the ridge a bit farther. The ride down was somewhat sketchy in places, but mostly much faster and less impactful than it would have been on foot. I returned to the car with enough time to make dinner and prepare for a more ambitious outing the next day.

Difficulties between Snowdon and N2

Grenadiers and Needles from 13,109