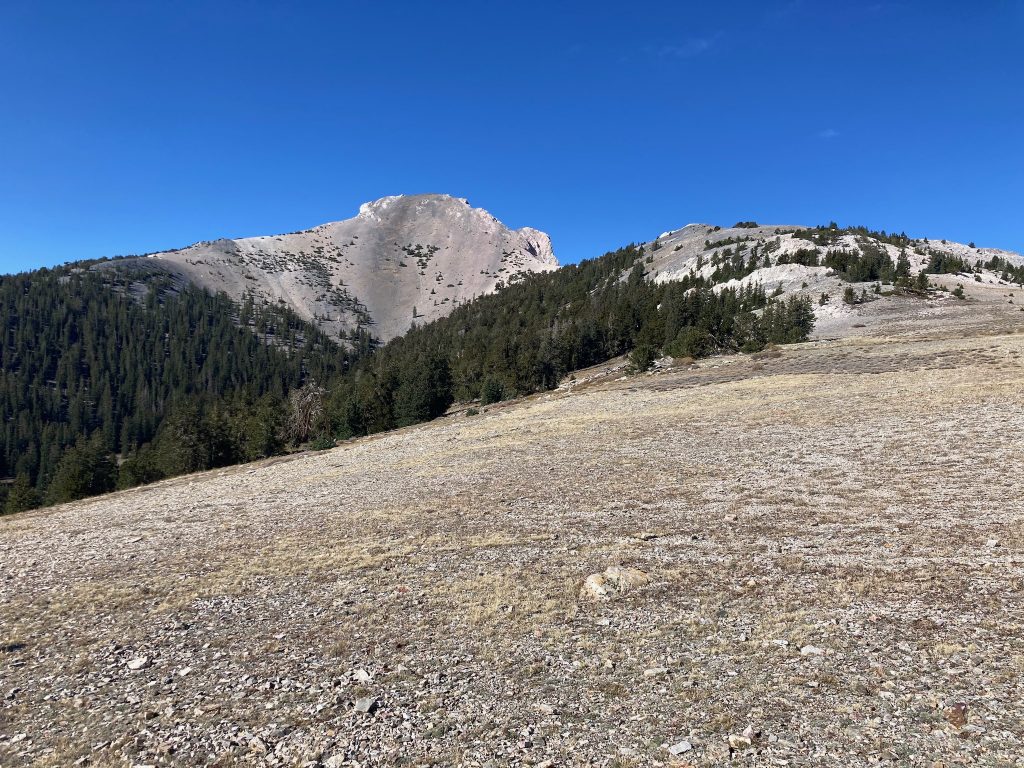 As the most prominent non-ultra-prominence peak in the Lower 48, Mount Moriah had been on my to-do list for awhile, but its position deep in Greater Nevada kept it there. When Sam proposed doing it as a loop with some of its neighbors, I realized it could be part of a larger plan to satisfy several objectives, together justifying the costly and time-consuming drive. I had actually tried to do Moriah on a previous drive, camping at the base only to be stormed off the next morning. The day would have the added bonus of meeting Luke, an elite trail runner, and Stav, a prolific peak-bagger whom I had “known” online for some time. 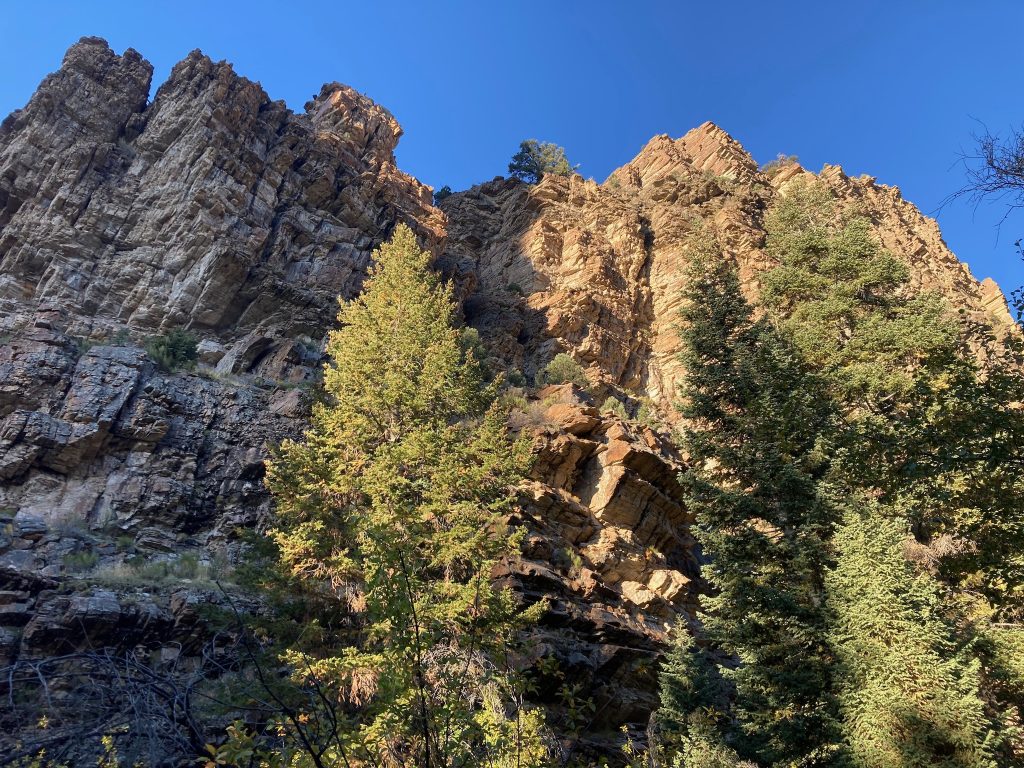 Coming over from Notch, I drove slowly up the good dirt road, eventually finding the others already camped on a spur just short of the trailhead. It was an ideal car-camping spot, next to the creek, with a huge fire ring, trees for shade, and even a stack of ready firewood. Sam had a good fire going, and after greeting everyone, I pulled up my seldom-used camp chair to cook dinner. It being redneck season, the last Walmart had been out of propane, so I was trying to cook with my frying pan on my tiny backpacking stove. Stav was kind enough to offer me his much less precarious Coleman. It felt good to be among my tribe — peak-baggers all, with an encyclopedic knowledge of the West’s mountains, and Luke a former Cat 2 cyclist as well — so it was a later evening than is normal for me. 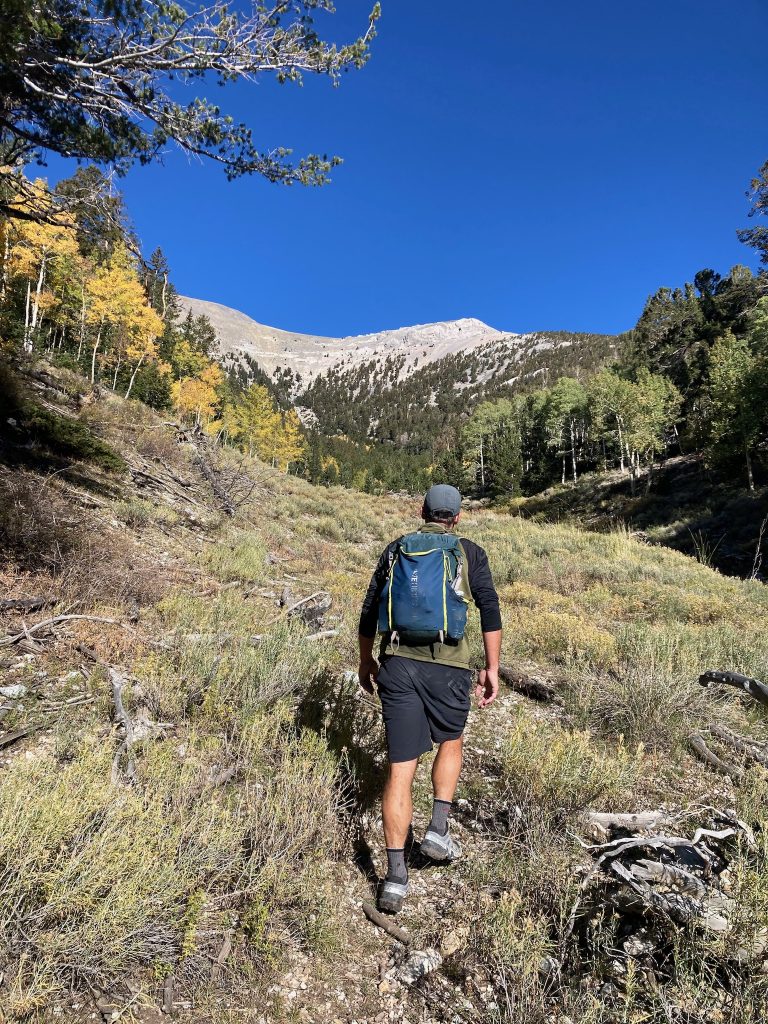 We were all ready to go at the appointed time the next morning; Stav noticed one of his tires was flat, but that was a problem for later. The trail up Hendry’s Creek is surprisingly good and well-maintained, so we quickly gained miles and elevation, passing by rugged cliffs and through Fall aspens. The creek had a disturbing tendency to disappear from time to time, but it was flowing strongly for so late in the season, fed by several springs along the way. We filled water at the last place we thought it would be above ground, then continued to a sagebrush meadow in a bowl east of Moriah, where the rugged (false) summit came into view. The trail continued climbing up the other side to the ridge, where it faded somewhat on its way to a prominent sign on the peak’s northeast shoulder. 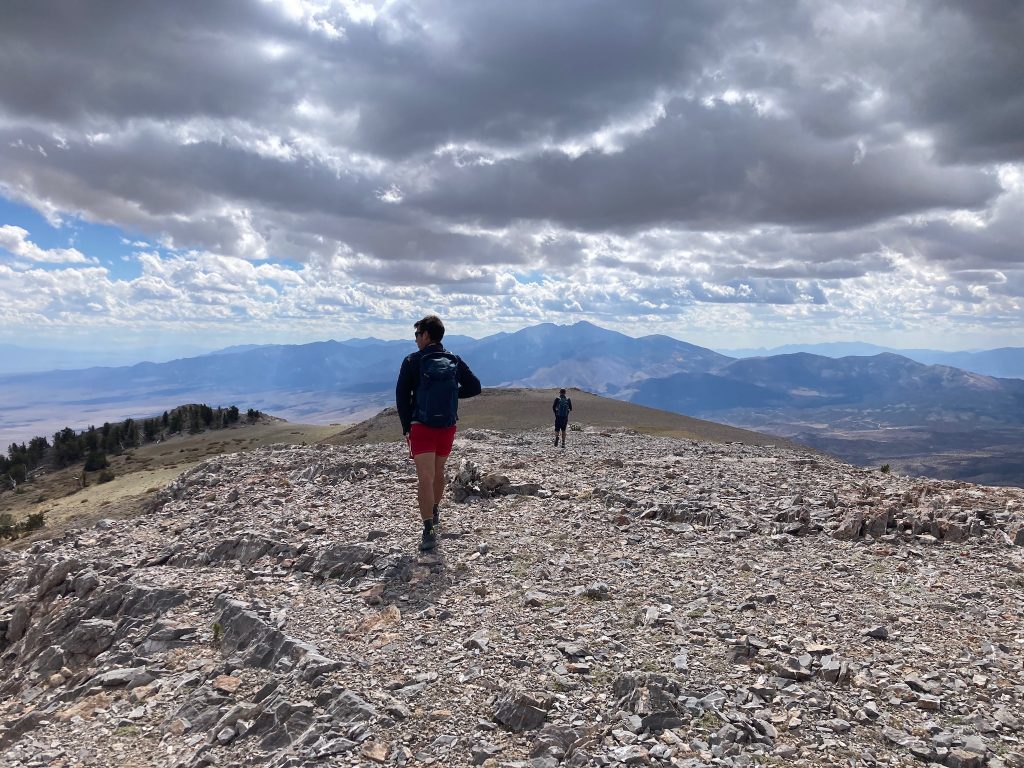 Having no more use for official trails for awhile, we continued cross-country up the bare ridge on use- or sheep-trails. The “kids,” Stav and Luke, opted to follow the trails around left, while Sam and I preferred the more solid and scenic rock along the crest. Sam had been here before, so he was not surprised like I was by the false summit. Still, we handily beat the others to the true one. Though not as high as nearby Wheeler, Moriah is a similarly impressive “sky island,” with forests of pine and aspen below, a bare top, and expansive views of its neighbors. Also like Wheeler, its summit ridge is usually windy, so after hiding in the lee for a snack, we wasted little time layering up and descending south toward Silver Creek Baldy. 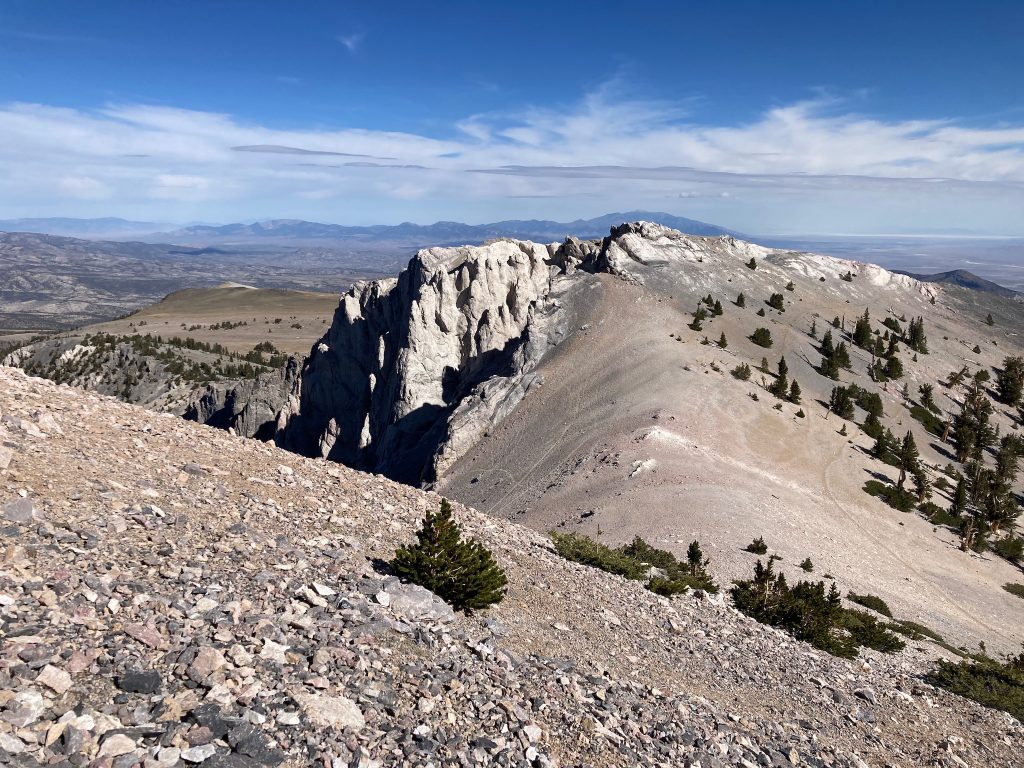 There were several minor bumps interrupting the long descent, and we eventually re-entered the trees. I had dreaded a desert thrash through woody brush and deadfall, but the bristlecone forest was pleasantly open, with soft ground making for quick plunge-stepping. We mostly stuck together on the climb, taking the ridge left before turning right to the summit. Stav had, for some reason, bought a large, heavy, and uncomfortable Osprey pack, which he loaded with a gallon of water, so he dropped off the pace toward the top. Our last peak, Old Man Mountain, still looked far away, so we wasted little time before taking another steep, fast descent. 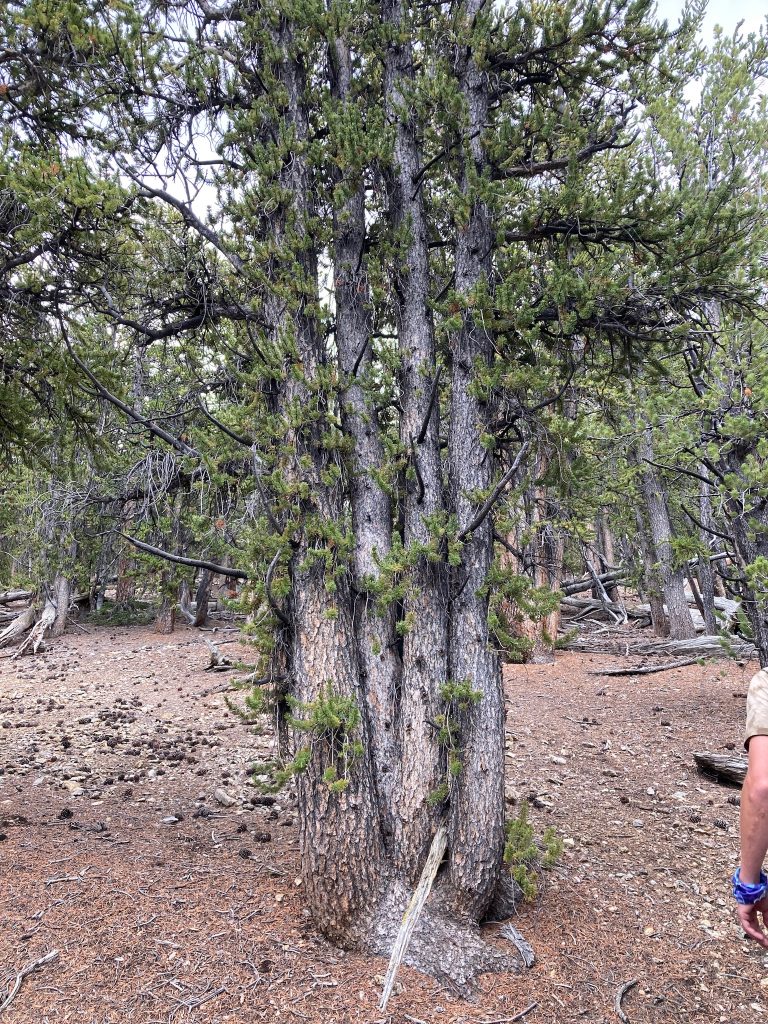 The climb to Second Fork Peak was much steeper, and Luke and I soon gapped Sam and Stav. I was worried about getting dropped myself, but managed to hang on, and even to hide from Luke how hard I was breathing. The final ridge to the summit was a fun, narrow limestone scramble, with steep drops to the northwest. We waited out of the wind for Sam and then Stav to arrive, signed the register, and continued to Old Man. 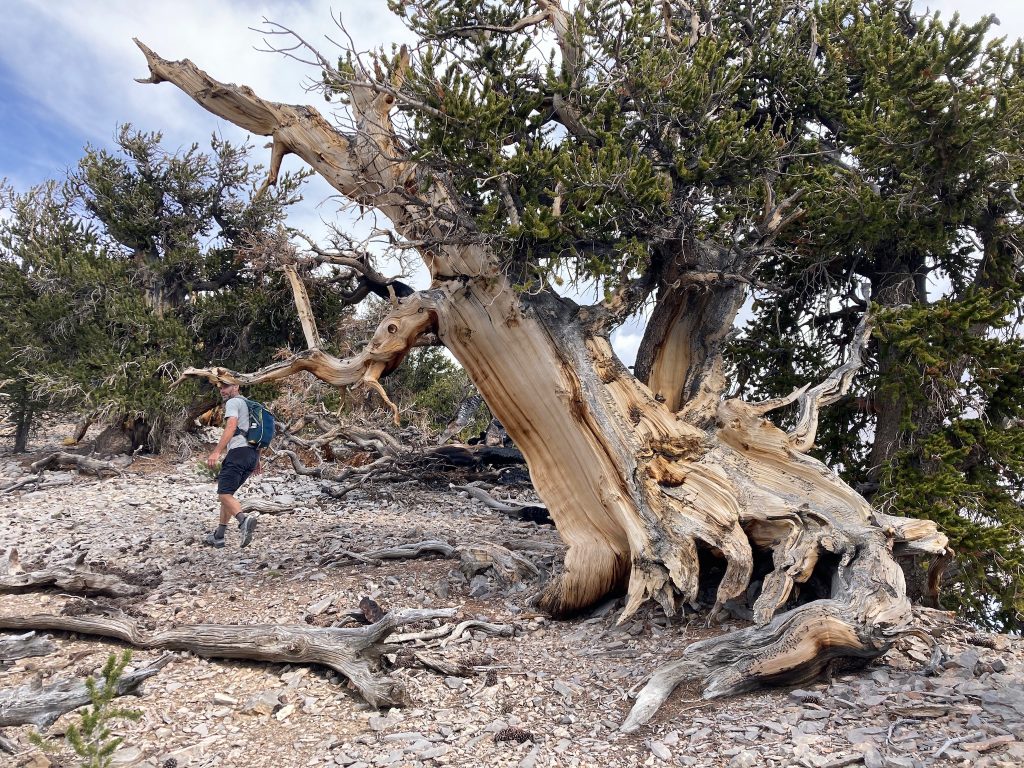 This descent was a bit less straightforward than the previous one, with a few minor cliff bands higher up, and a confusing topography of shallow ridges and gullies lower down. We were surprised by a group of four hunters higher up, sitting still and glassing the terrain below for sheep, of which we had seen none. It was fun to watch excitable, talkative Stav interact with these taciturn locals, who were probably some combination of annoyed that we were scaring their quarry, and overwhelmed by so many words. Lower down, I happily let the “kids” lead, moving surprisingly quickly while looking at their phones, keeping up a steady banter I thought of as the Stav and Luke Show. 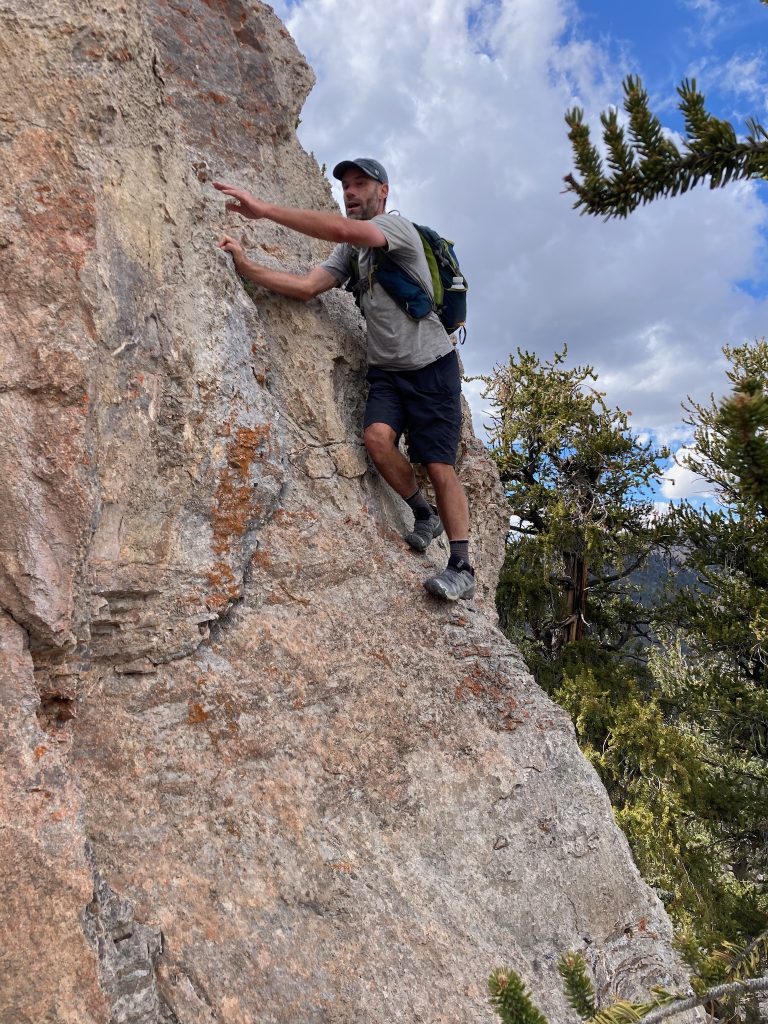 I think we were all feeling the long day on the steep climb to Old Man, which even turned scrambly near the top. I found some fourth class climbing on the back side of one bump, but it seemed to be avoidable, and no major deviations from the ridge were necessary. This section had some of the most impressively-gnarled bristlecones of the day, which Luke stopped frequently to admire and photograph. We enjoyed the final summit for awhile, then debated how to descend. The cliffs we had seen on the south side of Hendry’s Creek that morning were concerning, but it seemed like ridges to the north would get us back down to the trail without cliffing out. 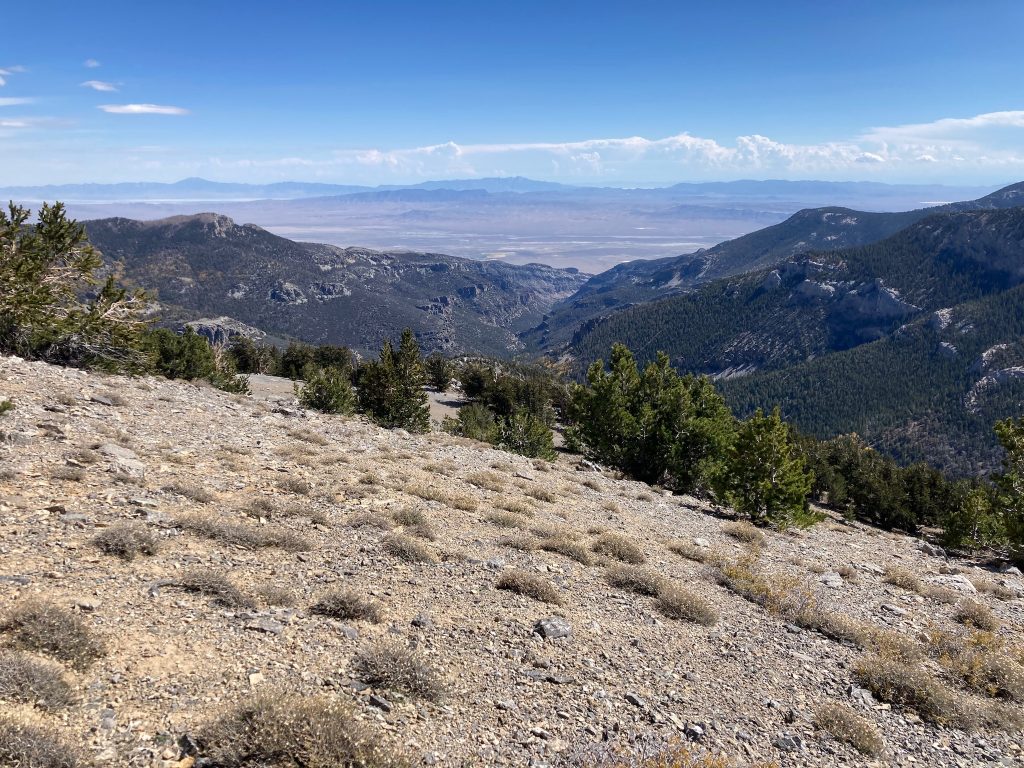 Hendry’s Creek from above

We followed the ridge north to a bump, then contoured around to its left, finding pleasant sand-skiing through the sparse trees. The skiing was so good that I got carried away, dropping west toward the valley before side-hilling obnoxiously back to the crest. The ridge gradually got worse from there, with the addition of first dinner-plate talus, then nasty desert brush. We debated our options, with me (wrongly) suggesting dropping down a talus field west to the creek, before bashing more or less straight north. While we never cliffed out, we finally found the miserable desert thrashing I had feared, with steep, loose ground and dense, woody plants. Sam managed to roll a large rock onto his calf, but thankfully escaped with just a bruise and some scrapes.

Finally stumbling out onto the trail, we set off at a brisk walk toward the cars. Luke and Sam are both serious runners, and Stav will run at need, so we soon picked up to a jog for a few miles. Stav’s knee began bothering him, though, so we slowed again to a walk a couple miles from the trailhead. I was fine with that pace, but when Luke took off, Sam and I had to keep pace, covering the final mile or so at a respectable speed. Stav arrived a few minutes later, and after he changed his tire, they all took off for long drives to Las Vegas and Salt Lake City. I had no one to see and nowhere to be, so I just drove a couple miles down the road to cell service to spend the night before continuing west.

Hendry’s Creek from above

Moriah from near Old Man