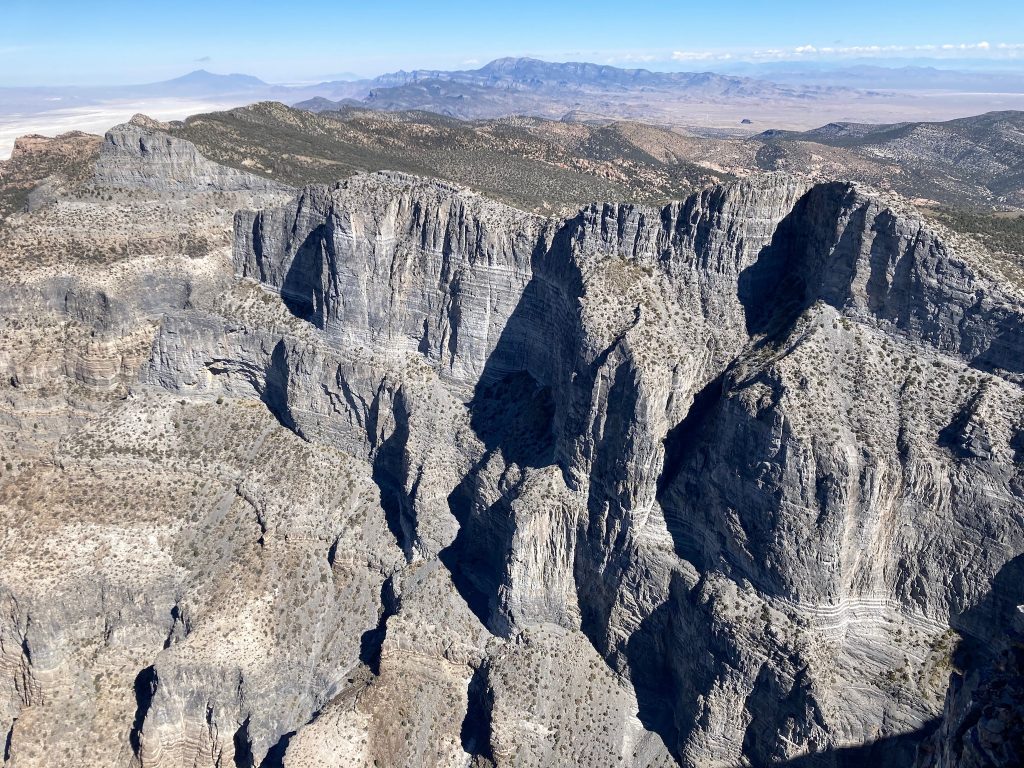 Notch Peak is a landmark on the endless drive east across Greater Nevada on Highway 6 between Ely and Delta. From the west, it is an unremarkable tree-covered uplift, but its east side is a wall of multi-thousand-foot choss cliffs. I had noticed it a few years ago on a previous drive, looking it up on Peakbagger as I sped by at 70 MPH (er… drove by at a sober 65). To save money and sanity, I try to minimize long drives across Nevada, but I do maintain a to-do list of peaks to break them up, and Notch was near the top. This time I finally got it done. 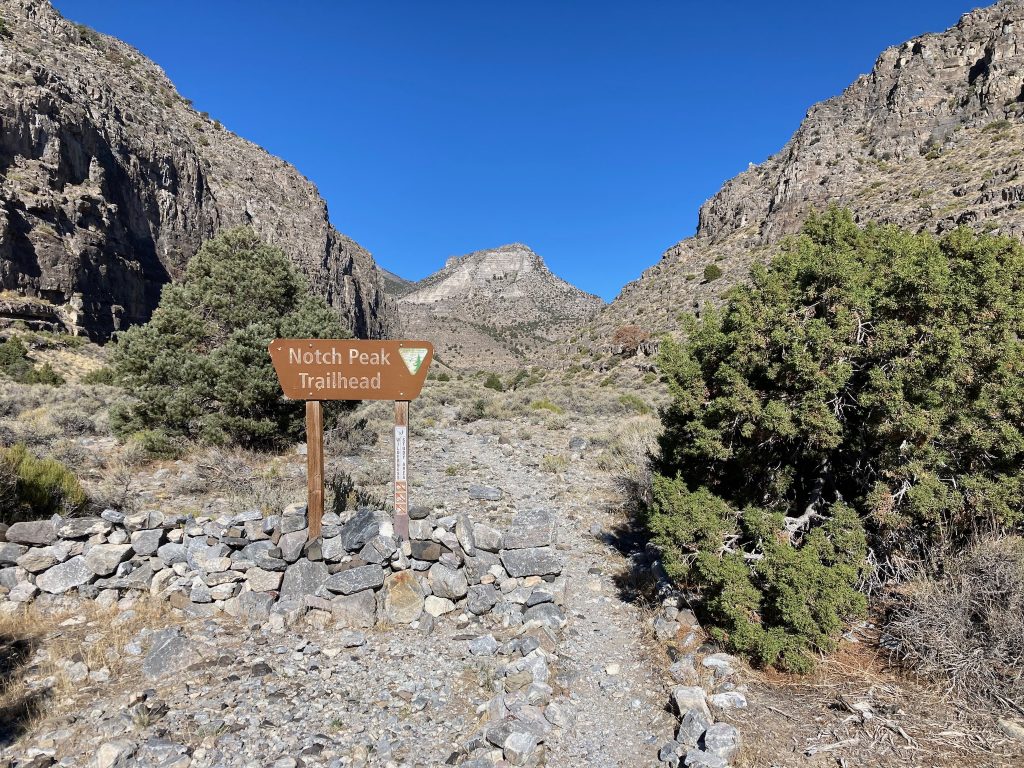 Not wanting to sleep right off the highway, I drove a mile or so down a dirt road until I could find a wide enough place to park, and set off by bike from there. I initially wasted some time when Maps.me led me on a possibly more direct but far worse road to the trailhead. Belatedly looking at the Peakbagger tracks I had downloaded, I corrected course on another disused road, then took the well-graded dirt north and west toward the trailhead. The road was fine for passenger cars up to a shaded picnic spot, where a much rougher road headed southwest. This road was mostly Subaru-able, but had one steep and rutted climb that had defeated one SUV driver. I found a Bronco and another SUV at the trailhead, where I locked my bike to the sign, changed into hiking clothes, and set out. 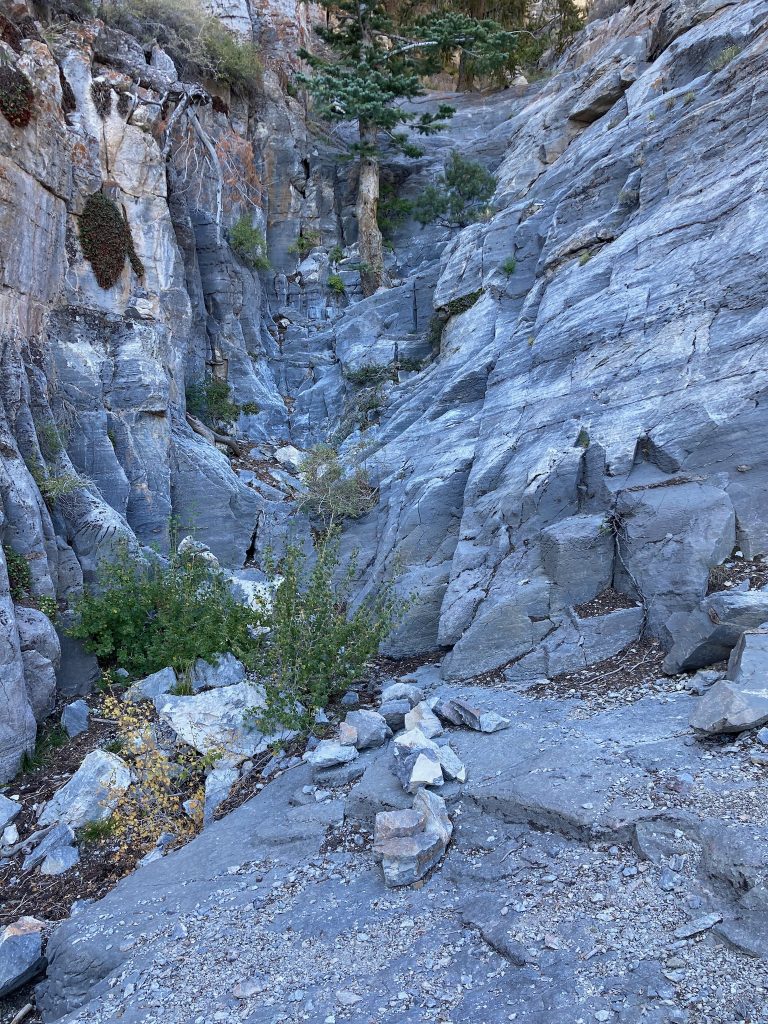 The relatively popular trail follows a narrow canyon most of the way, and was therefore pleasantly shaded at this time of year. It is mostly an easy and brush-free walk, with a few rock steps and a short section of easy third class. I passed several people in two groups along the way, a remarkable crowd for such a remote peak even on a weekend. I also noticed a large bird flying from tree to tree ahead of me, which turned out to be some sort of owl, about the size of a hawk and too timid for me to get a good photo. 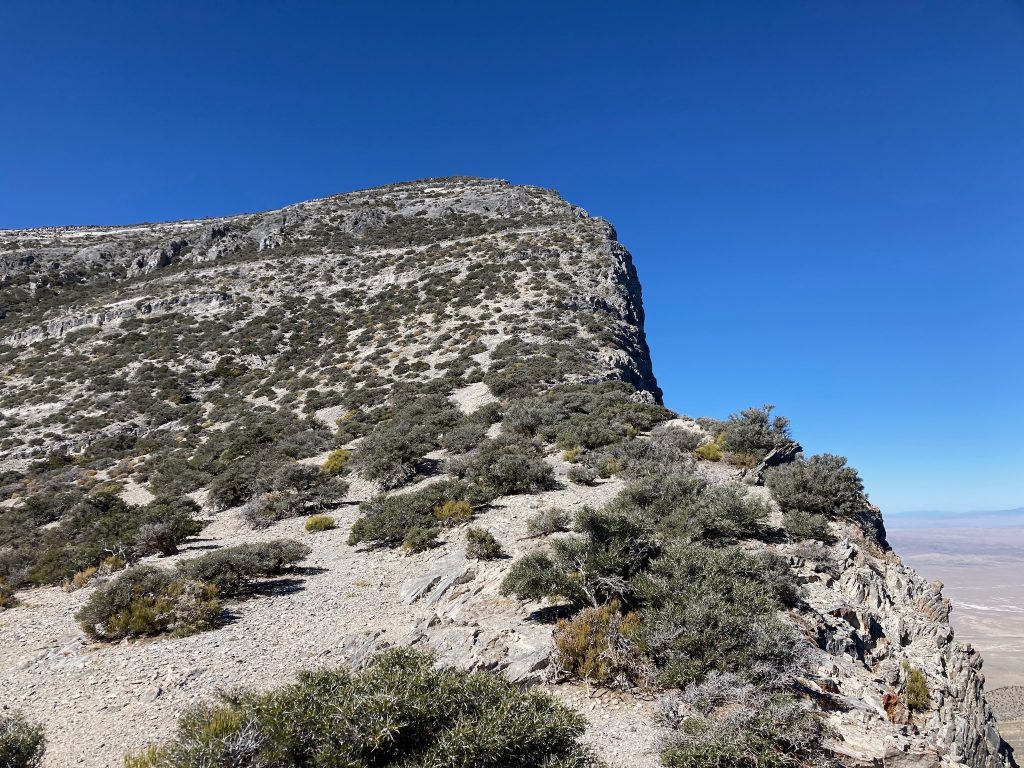 The trail eventually climbs out of the wash, heading northwest up a hillside to the ridge east of the summit, from which one has the first clear view of the peak’s striking cliffs. I paused for a minute there, then continued up the rocky east face, following a network of braided trails mixed with easy slabs to the summit cairn, perched on the edge of a north-facing cliff. There was no register, but I found an old straw hat inside a hat-sized rock house. I sat for awhile near the cliff west of the summit, taking in the view of familiar and unfamiliar peaks all around. Swasey sat unimpressively to the north, while ultra-prominence peaks Wheeler, North Schell, and Ibapah were visible to the west and northwest. The next day’s peak, Mount Moriah, rose nearby on the other side of the Tule Valley.

I passed back through the two groups on my way down, stopping to talk to the second, an extended family from Delta out for a weekend hike in their “local” mountains, a mere fifty or so miles’ drive away on the far shore of the dry Sevier Lake. I imagined that these wholesome- and healthy-looking Mormons were descendants of the original settlers of Delta, commanded by Brigham Young to go forth and make that piece of land bear fruit. Today Delta, Hinckley, and Eskdale are hardly bustling cities, but their small communities endure.

Cliffs along the wash

Looking back toward wash