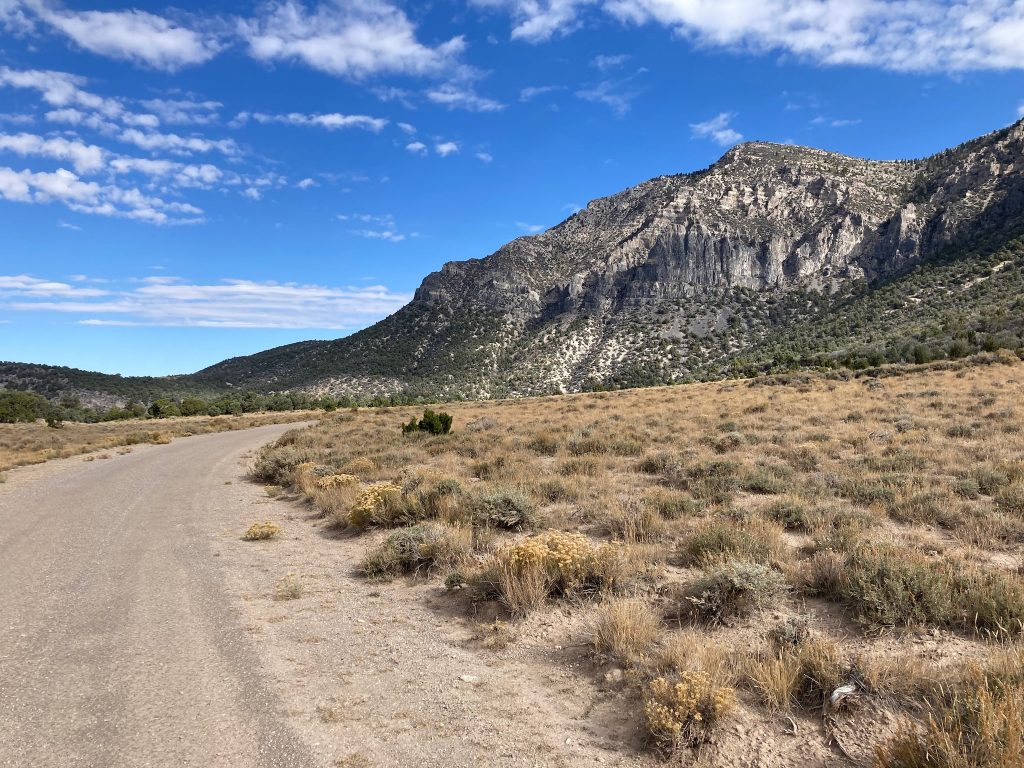 When storms make the Rockies unpleasant, there is always a refuge in the Great Basin desert, or “Greater Nevada.” The region, extending beyond Nevada itself to include parts of Utah, Idaho, California, and Arizona, contains few people and many highly-prominent peaks. If these peaks were not mostly piles of rubble covered in woody brush, it would be a peak-bagger’s paradise. I was planning to meet some folks near the Utah-Nevada border, and had a couple of extra days, so I decided to spend them tagging prominence points along Highway 6. 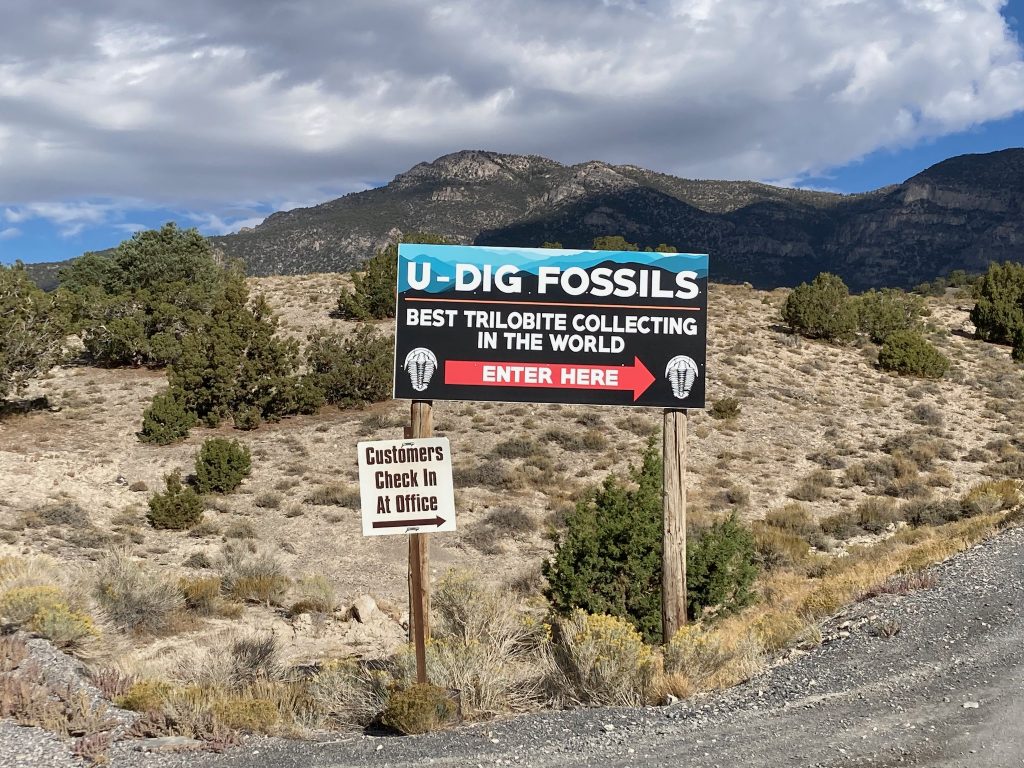 The first was Swasey Peak, about twenty miles of dirt road and three miles of hiking from the highway. In the past I would have happily driven as far as possible, but now I am older, my car less capable, and I would rather spend money on food and improve my fitness than spend it on gas and wear out my car. So I slept near the highway, then rode my bike across the endless basin toward the peak. Along the way I passed one camper, a muddy little pond with a fence through it, a herd of wild horses, and several signs leading me to a “U-dig trilobite quarry.” I have always wanted to find a trilobite, and have seen only one in the wild near Mount Assiniboine, where it would have been both illegal and impractical to take. But the idea of paying some petty, pathetic BLM-land squatter with an excavator to pick through his pile of rocks felt little better than buying one at a rock shop. 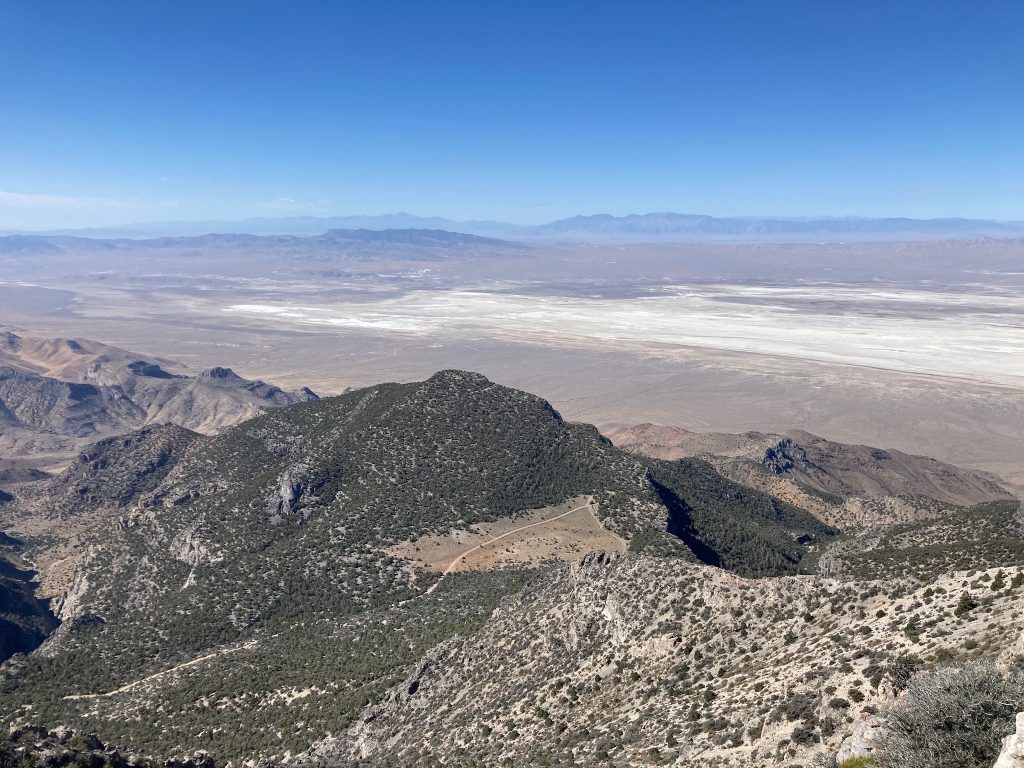 Trailhead and Tule Valley from summit

So I rode straight by, grinding up a steep climb to a sloping plateau, then continuing around to the mountain’s west side on rolling terrain. I rode past the parking area a short distance on a faint road, then locked my bike in the shade of a juniper and changed into hiking pants. I found a faint use trail beyond the road, which headed generally up and left toward the peak’s north ridge. The trail was very faint, so I eventually lost it in the typical desert mix of piñons, woody brush, and limestone scree. Giving up, I continued thrashing up and left until the trail appeared again, steeper and more obvious, heading back up and right toward the summit. The trail faded when it reached the ridge, but thankfully the terrain was mostly easy and brush-free the rest of the way to the summit.

Swasey is slightly higher and much less dramatic than its neighbor to the south, Notch Mountain, a landmark along Highway 6 and my next goal. It therefore has a commanding view of the barren Tule Valley on its steep west side, and the sparse trees do little to block the views in other directions. I found an eye bolt in a block of cement, some remnants of a survey station, and the typical Utah summit mailbox, containing an excellent old MacLeod and Lilley register. I lounged around a bit, then tried to retrace my steps on the descent. This worked until I entered the trees, where I once again lost the trail. I tried cutting back and forth a bit, but did not regain it until I was almost back at my bike. From there it was a quick twenty miles, generally downhill, back to the car. Amazingly, there were a few cars parked at the trilobite mine, but I was anxious to get out of this remote corner of the desert. No fossils for me this time…

Trailhead and Tule Valley from summit