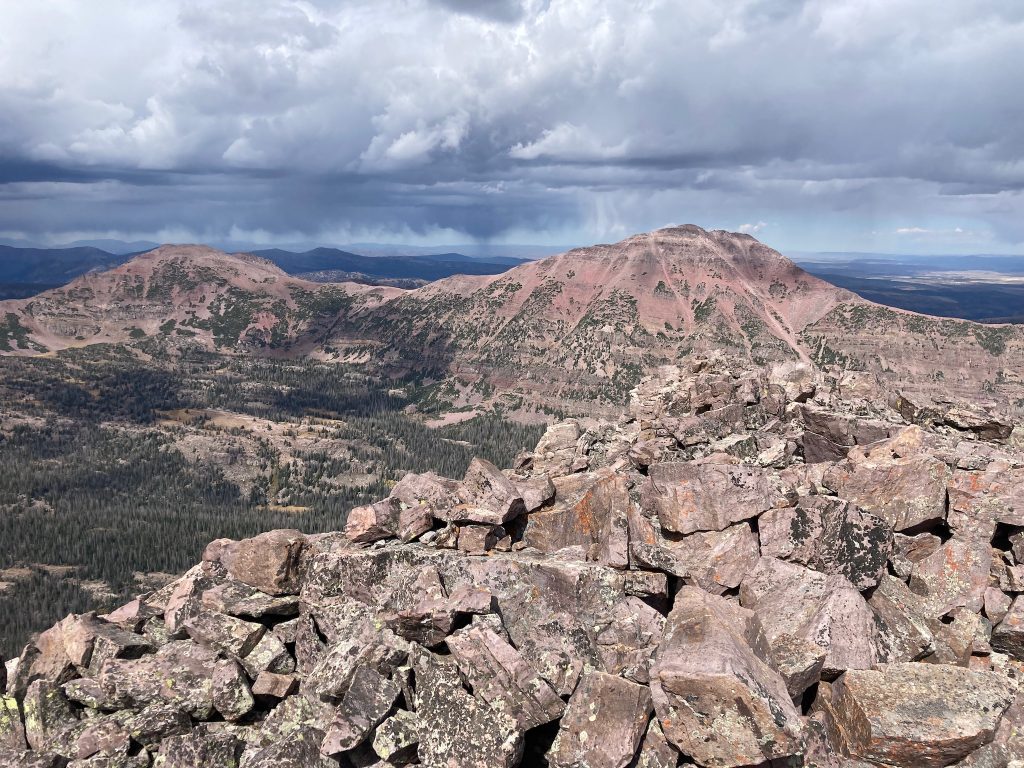 My need to be online in the evenings prevented me from visiting any of the remote trailheads accessing the 13ers, which lack cell service, but the peaks around Agassiz are well within a day’s radius of Kamas. Ostler and points east seemed too far for easy access, but A-1 and East Hayden had looked interesting on my trip to Hayden with Eric, Sam, and Greg, and it seemed that I could link them in a short, steep cross-country loop. All are above 12,000 feet, and A-1 has over 1000 feet of prominence. Presumably it is not named for the steak sauce, or for a local plumber or towing service wanting to appear first in the yellow pages (kids, ask your parents what those were). 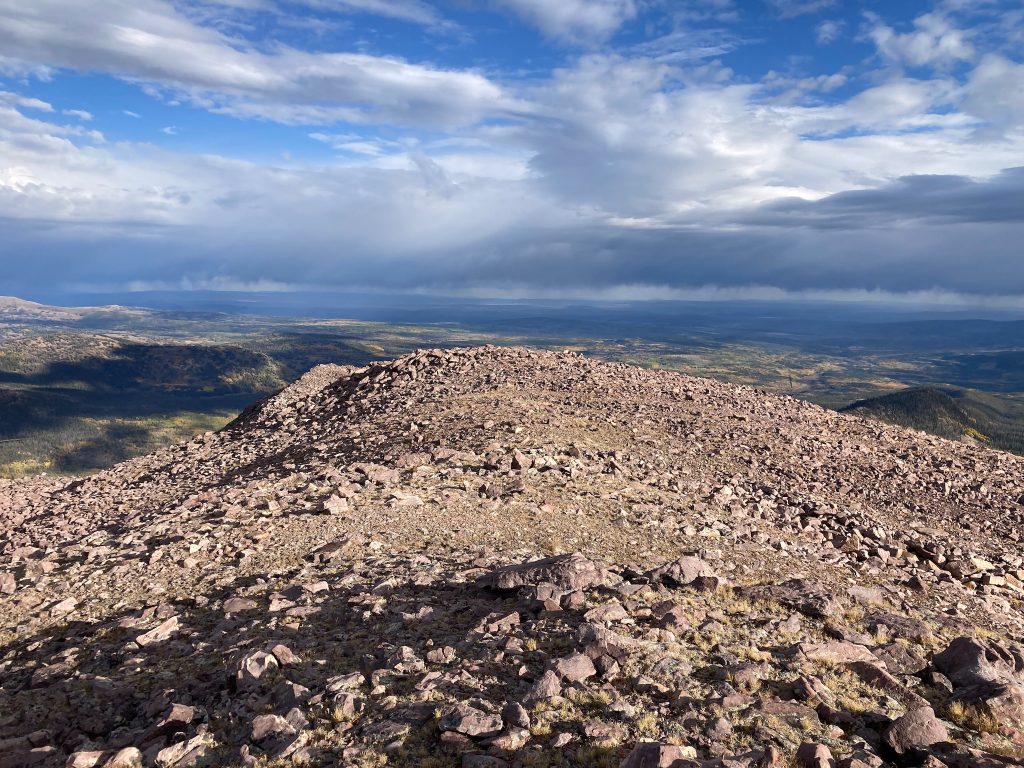 I drove over Bald Mountain Pass again, and parked at a random pullout that was roughly closest to the saddle between Hayden and Kletting. The forest is generally open with little deadfall or brush, so I had an easy time descending to the creek/marsh that is the Hayden Fork, which I crossed on a convenient log. Once on the other side, I climbed through steepening woods and eventually semi-open slopes with some scree and brush, but generally good game trails. Once on the ridge, it was a straightforward walk to Kletting, where I tagged the two main talus bumps, unsure which was higher. I admired the distant storms in all directions, not yet threatening me but foretelling wetness in my future. 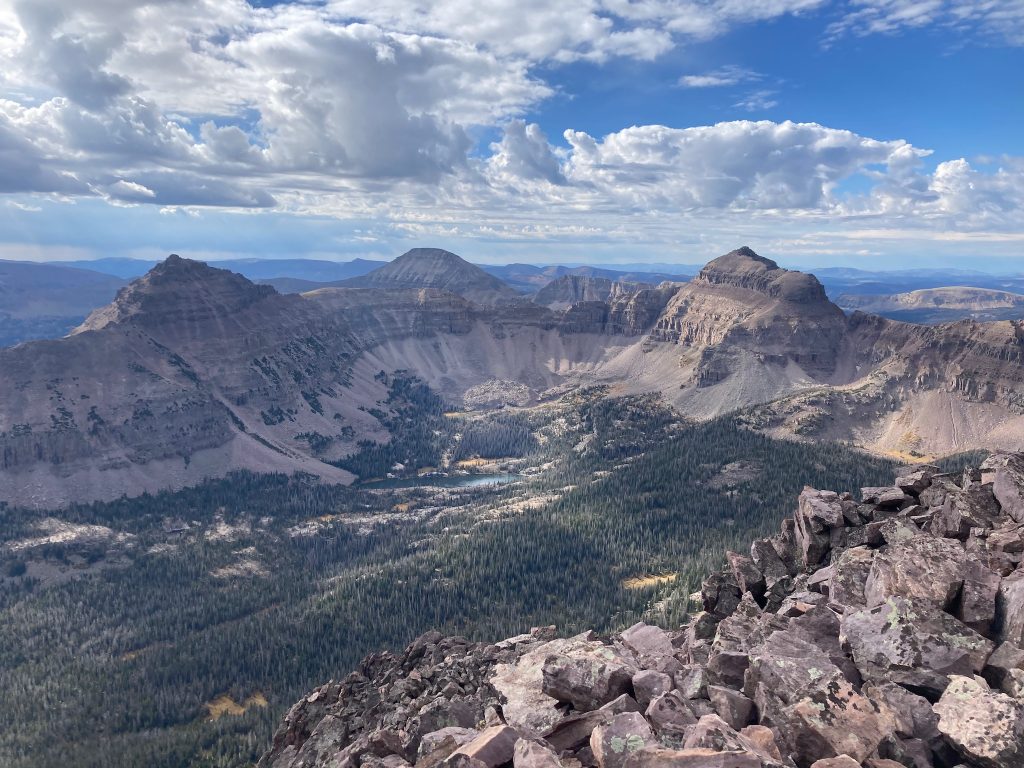 From Kletting, I followed the broad ridge to A-1, staying near the crest to find the most stable rocks. The summit had a register with a few familiar names and mention of an embarrassingly-named “Crusher Loop,” which I was happy to avoid. The storms were getting closer, but my immediate area remained dry and sunny, and I do not melt in water, so I decided to keep going. I had scoped out the ridge’s south side as I made my way over Kletting, and there looked to be an easy path through the cliffs near the last saddle before A-1. I found a fair amount of loose talus and brush, but my route worked well enough, and I was soon in the forests of West Basin. 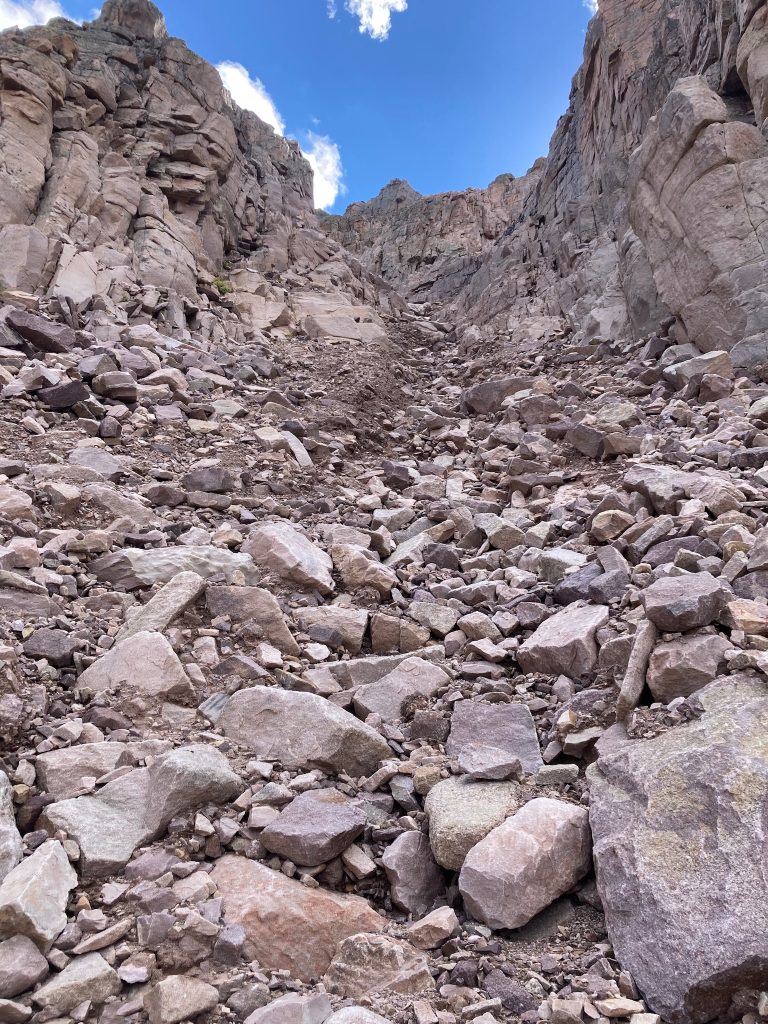 I felt a few raindrops here, and the clouds were closing in, but nothing looked too serious, so I decided to continue toward East Hayden, which I guessed would take me a couple of hours. The woods here were much less pleasant than those along the Hayden Fork, with brush, blow-downs, and undulations. Fortunately this seldom-visited basin harbors a healthy population of elk, whose trails I could sometimes follow to ease my passage. I briefly picked up the seldom-used human trail just below Kermsuh Lake, then took off for the chute to its east that seemed the best way to reach East Hayden’s north ridge. 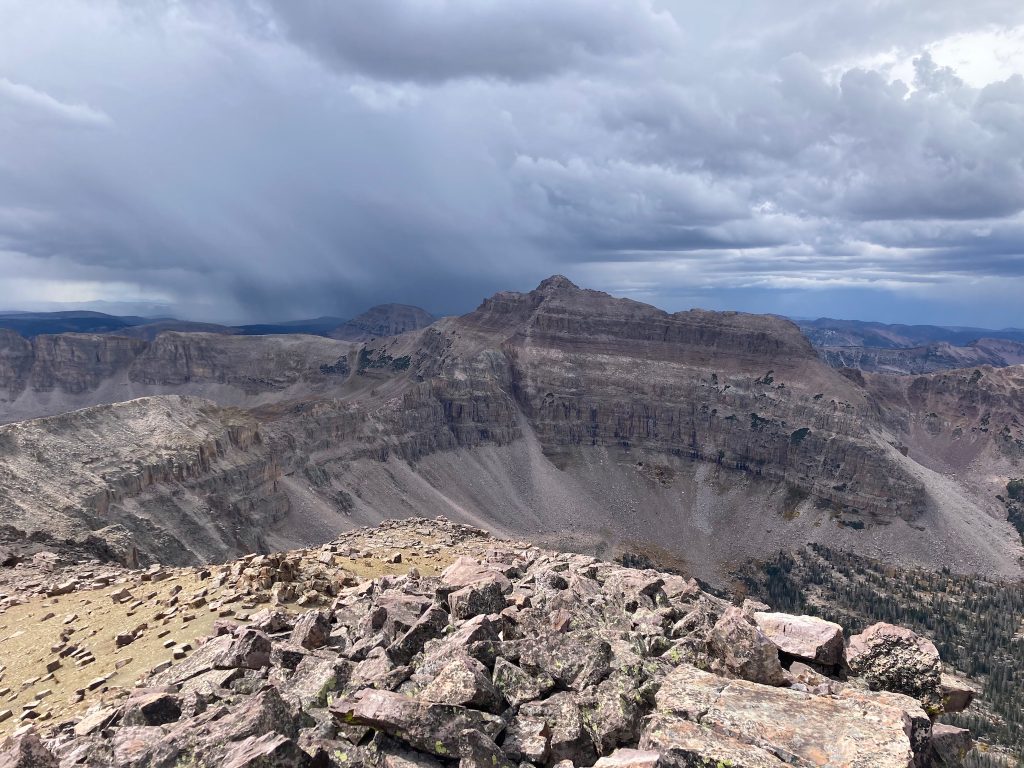 The talus in this chute was miserably loose, but fortunately this had all been scoured away in a narrow runnel, which I followed up the right branch. My runnel ended as the chute merged into the west face, and I picked my way up and right, staying below the crest and weaving through short cliff-bands with a bit of third class climbing. I reached the ridge perhaps a couple hundred yards from the top, and stayed on it through some possibly-optional fourth class climbing to the summit cairn. I was definitely going to get soaked, and soon, so I wasted little time before reversing my route, lest I also get lightning-ed. The rain began near where I regained the runnel, and intensified as I picked my way down the loose talus to the lake. 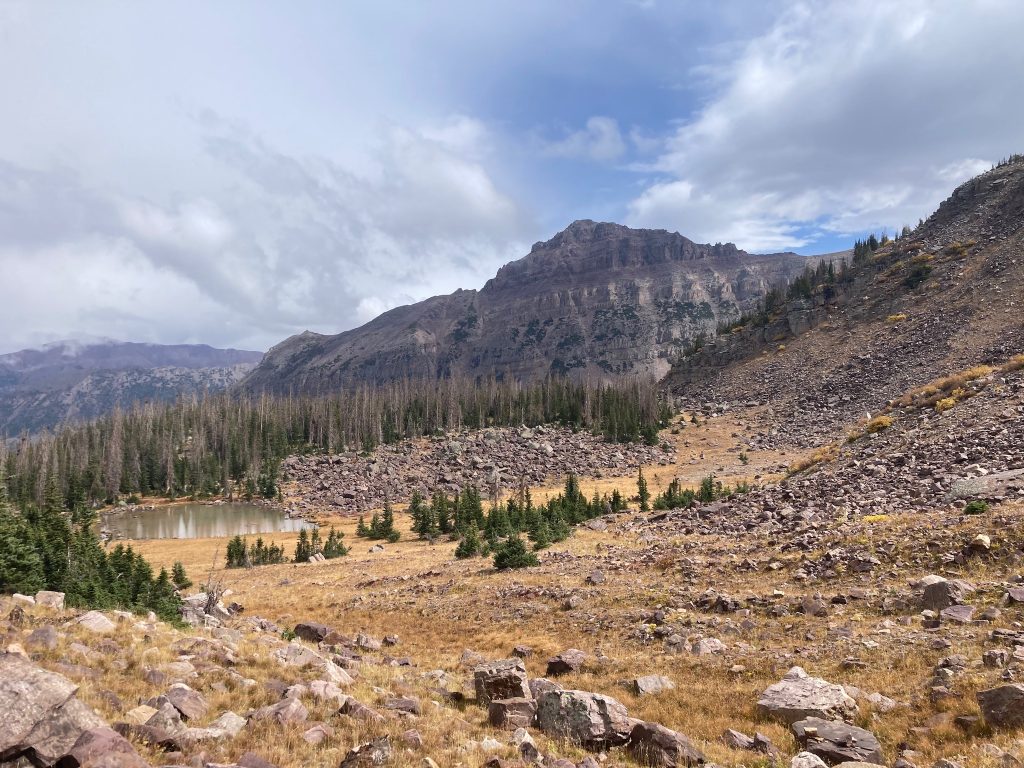 I crossed Kermsuh Lake’s outflow on a log bridge, then made my way toward the head of the valley on open slabs and through easy forest. I got a decent soaking but, as expected in the Rockies, the storm soon passed, and I was reasonably dry and happy by the time I reached the Hayden-Kletting saddle. I took a different route down, finding the same easy travel higher up, and some good scree-skiing, but worse woods and bogs lower down. The woods were still wet, and I managed to bash my shin slipping on some deadfall, yielding some blood. I continued the short distance back to the car, bandaged myself up, and returned to Kamas to check the forecast. With increasing chances for storms in the coming days, it was about time to move on.

Hayden, with Bald and Reids behind