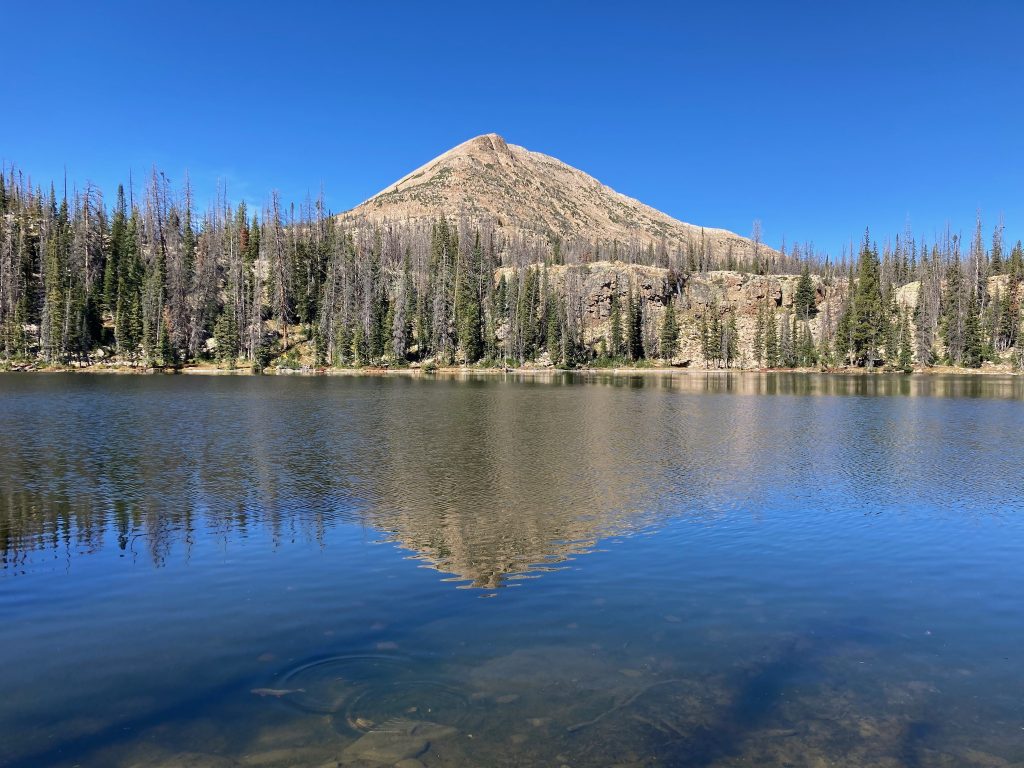 With good weather persisting in the Uintas, I wanted to spend a bit more time getting to know the range. I thanked Eric once again for hosting me, packed up the car, and left Salt Lake clean, well-rested, and relatively early. Still, it was a long drive back up to the mountains, so I chose to tag a few snack-sized peaks near Highway 150 around Bald Mountain Pass. At 10,700 feet, it is ridiculously high for being so far north, and offers such easy access to the nearby 11,000-foot peaks that it almost feels like cheating. 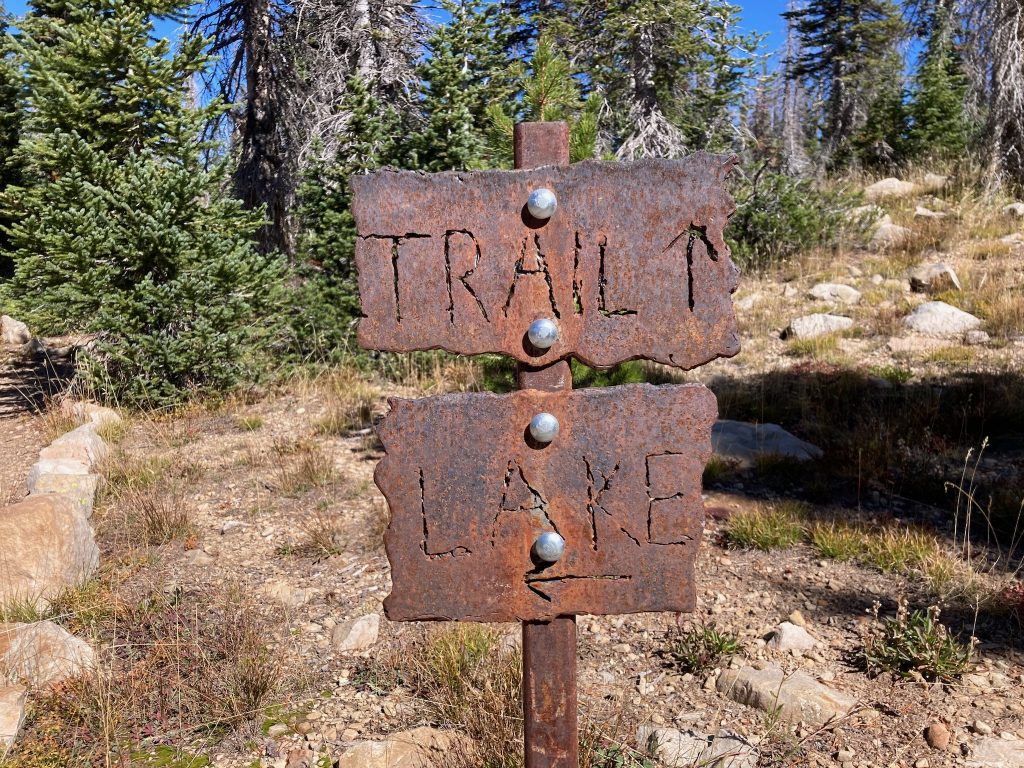 My first goal was Mount Watson, a prominent peak south of the pass near a cluster of about twenty of the Unitas’ many lakes with names such as Cliff, Wall, Hidden, Divide, and Linear. The first four names are obviously descriptive, but Linear is not especially long and straight, so perhaps it is named for some local settler named Hiram Linear, and pronounced “li-NEAR.” It looked like a fisherman’s paradise, a sort of subalpine buffet if you have a rod with which to serve yourself. But I was there for the peaks, content to fish with a can opener, and there was a similar spread of small summits. Watson by itself would be unsatisfying, so I picked out a loop over East and West Notch Mountains to its north, with the option to continue to some unnamed 11ers farther west if I felt the urge. 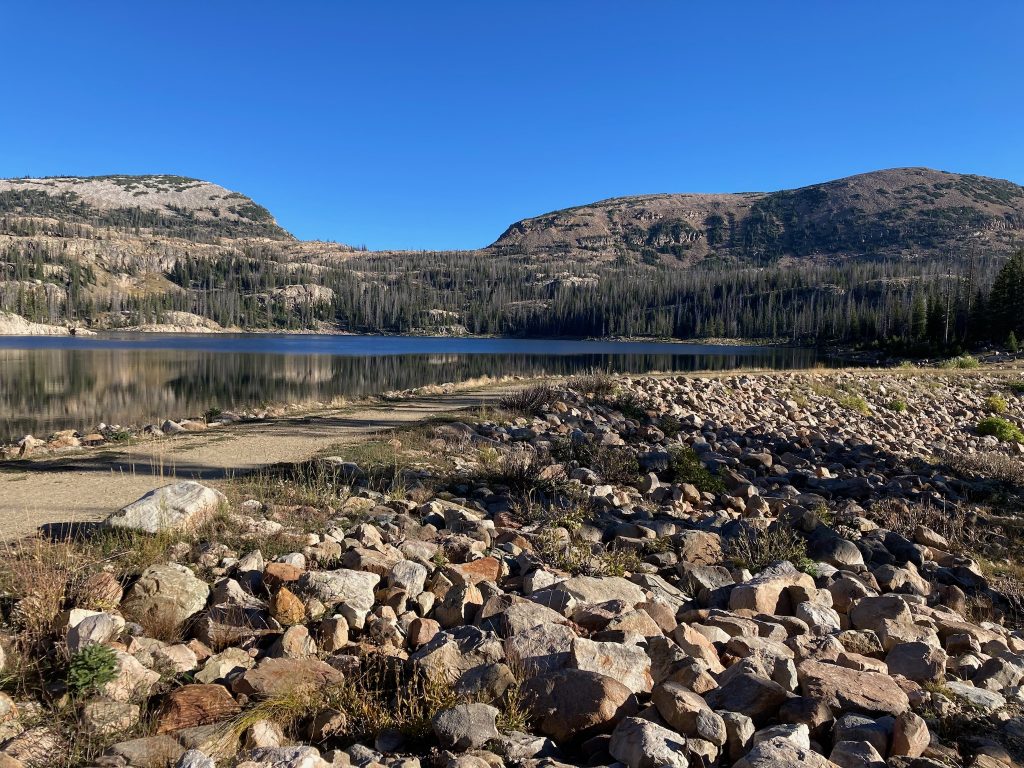 After a brief bout of wrong-trail-itis, I found the Wall Lake trail and headed north, jogging some of the gentler sections on my way to Wall Lake, which appeared to be a natural lake expanded by a small earthen dam. The area is a series of benches separated by steep rock steps, with the trail meandering to switchback through breaks in these walls. I continued to Hope Lake, then left the trail to make my way more or less straight towards East Notch. There were a few stretches of deadfall lower down, but the woods were mostly open and easy. Higher up, I found a break in the short cliff-band at the peak’s base, and mostly avoided the krummholtz higher up. I had been worried that the talus would be terribly unstable, but it was mostly painless going uphill. I was soon on the summit, enjoying views of Bald to the northeast, and the Wasatch far to the west. 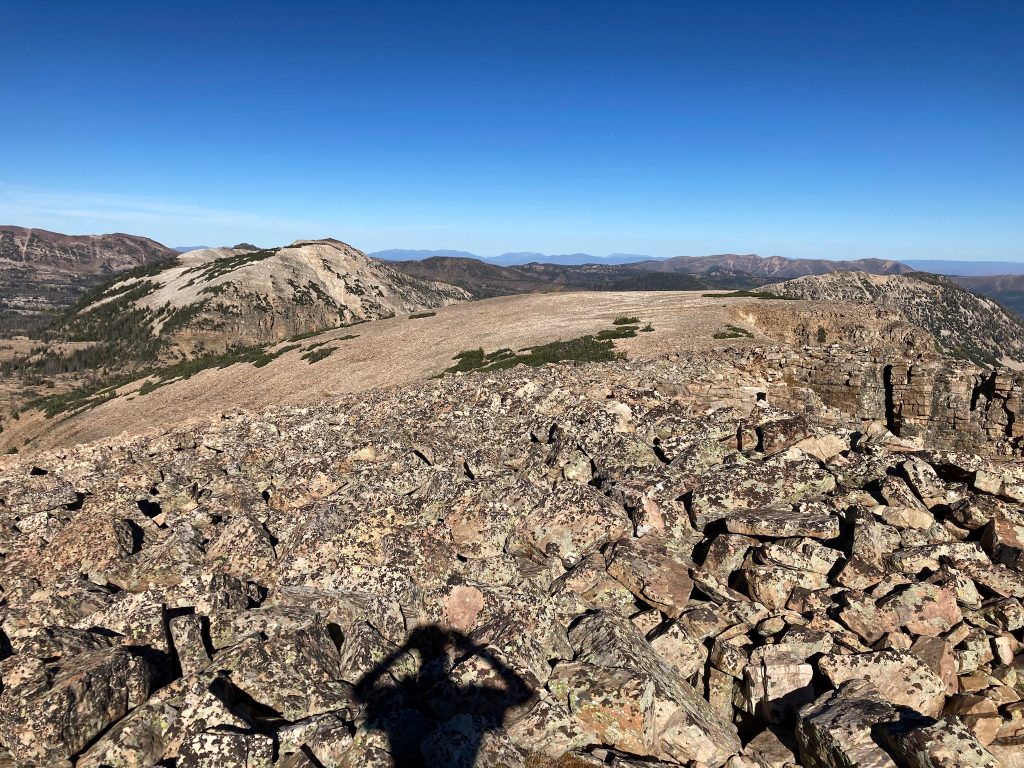 From East Notch, I followed the ridge west to avoid side-hilling, then dropped to the notch itself, descending a short third class cliff-band. I crossed the trail, then side-hilled around to the south to avoid cliffs and a subpeak on the way to West Notch. The talus had been largely tamed by grass and trees here, and I found some surprisingly well-developed game trails, making the climb to the ridge after this peak surprisingly easy. From there it was mostly easy walking, with a bit of scrambling to go around or over a few more minor bumps. Unlike the east peak, which is composed entirely of the typical grayish granite, this one’s summit is a small cap of reddish choss. The views were mostly similar, but I had a better perspective on Watson, convincing me that its northwest ridge was the best line of ascent.

I returned to the first saddle, then dropped steeply through the woods. This was the least pleasant part of my loop, a steep mix of ankle-grabbing woods and hardpack. I tried to link game trails higher up, then found a gully that was, if loose, at least brush-free. Crossing the plateau toward Divide Lakes and the base of the ridge, I found several small cliffs, with occasional cairns at convenient breaks. Once on the ridge, I found bits of use trail in the dirt, and plenty of boulder-hopping. I stayed near the crest, and reached the broad summit without any problems. Glancing through the register, I noticed that someone had described the south side as “very steep.” I descended the southeast ridge, downclimbing a few third-class rock bands, then wrapped around northeast until I intersected the trail near Watson Lake. I hike/jogged back to the car, then headed for the even higher Bald Mountain trailhead just below the pass. 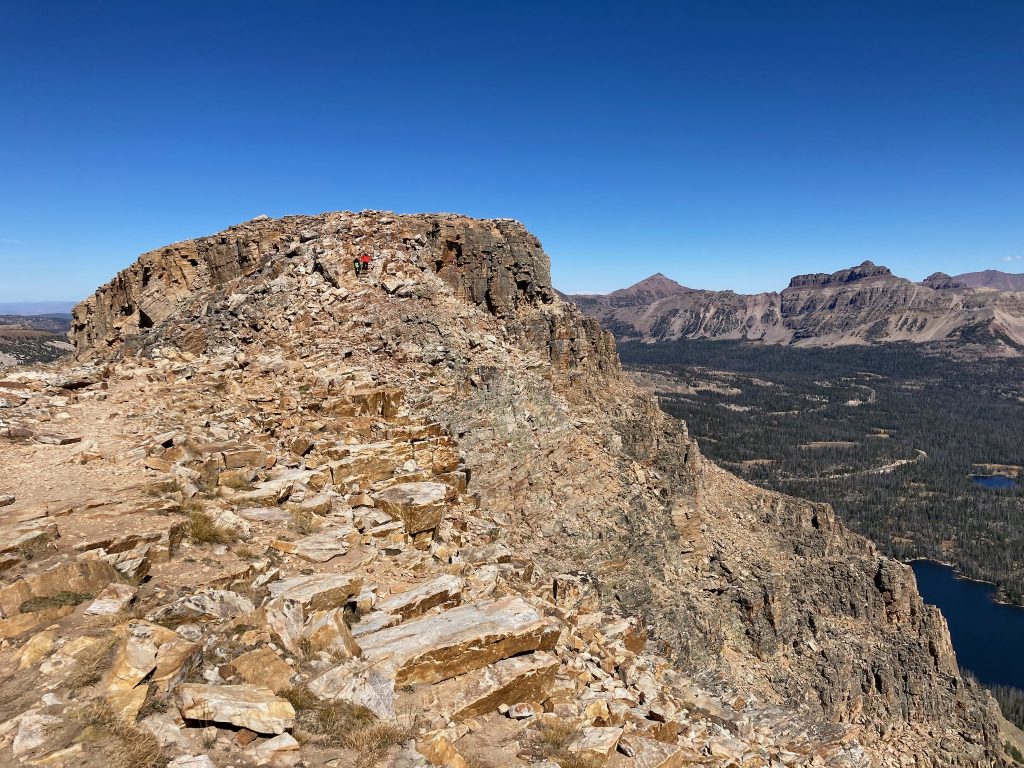 Near summit of Bald

Bald is a popular hike, and I met the expected weekday mix of locals on the trail, from couples to small groups of retirees. It is a rewarding summit, with the precipitous north face dropping away to yet more lakes, and the higher peaks around Agassiz rising beyond. Rather than returning down the trail, I picked my way along the annoyingly loose summit plateau, then descended the ridge toward neighboring Reids. While I found occasional bits of use- or game-trail past the saddle this peak sees only a tiny fraction of its neighbor’s traffic. I mostly followed the ridge, steep and loose to the left and vertical to the right, choosing to attack most of the cliff-bands directly rather than contouring around. This provided some third-class amusement, and one bit that was probably low fifth, on rock that was pleasantly solid and blocky. 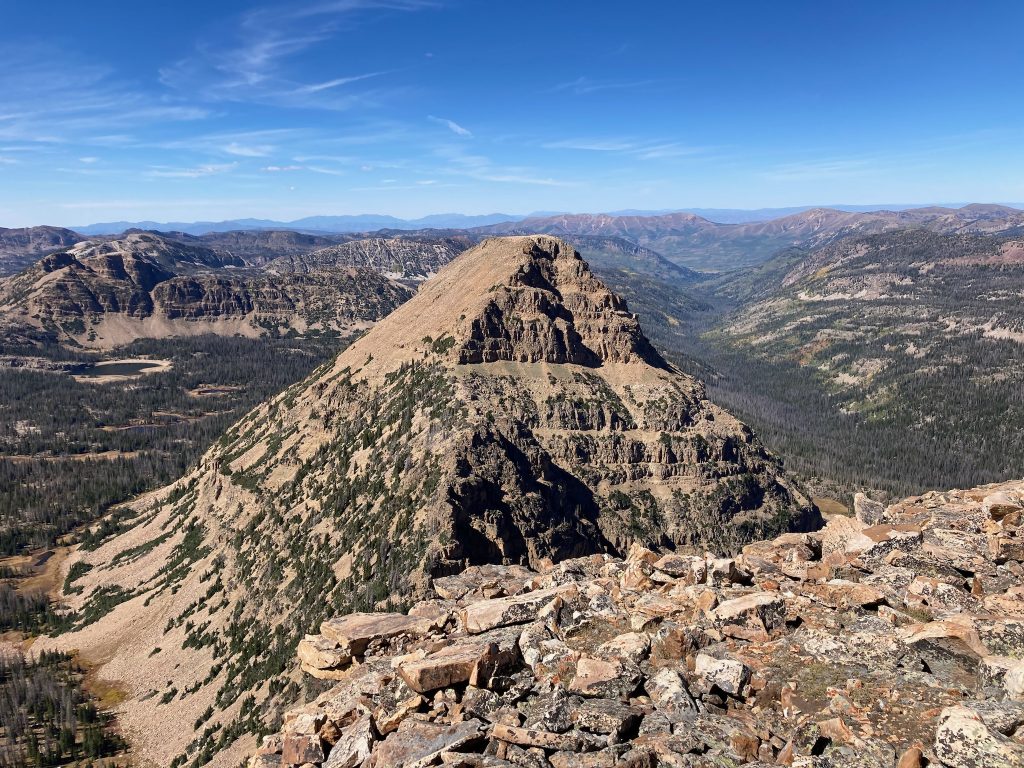 I did not know enough about the range or the locals to make much sense of the register, but I did enjoy one guy’s anxious outpouring. His “lovely wife” was recently pregnant, and he was grappling with his new responsibilities and impending loss of freedom. He clearly needed to talk things through, but it was curious to me that he chose to do so in a summit register. Some people do write these long confessionals to like-minded strangers, and I sometimes read them, but I prefer to just add my name and a few words about my route and/or the weather. If I want to be long-winded about a summit, I can do that here.

I returned to the saddle with Bald, bypassing the steeper downclimbs, picked my way down to the plateau south of the ridge, then meandered through the woods until I picked up the Notch Mountain trail. This section could have been unpleasantly boggy earlier in the year, but I found it mostly dry and crispy. I probably should have jogged back to the car, but was feeling lazy, so I walked and listened to a podcast about decarbonization. I was surprised and somewhat dismayed by the area of wind and solar necessary to reach net zero, even with nuclear and some carbon sequestration. My half-joking suggestion that we pave Nevada with solar panels and bury nuclear waste beneath them is not too far from the truth. I had hoped to add Murdock Peak to my peak-haul, but I was out of time and energy, so I hopped in the car and burned some hydrocarbons on the way back to town.

Reids and Bald from West Notch

Near summit of Bald

A-1, Hayden, and Agassiz