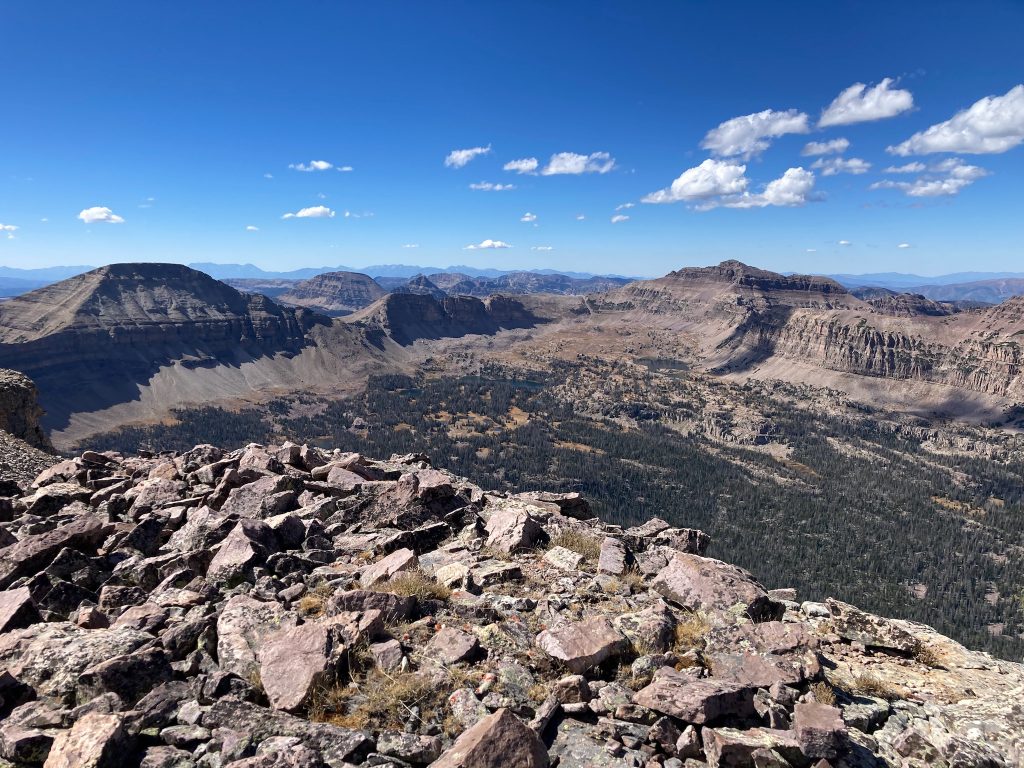 Agassiz and Hayden from Spread Eagle

I had visited the Uintas only twice before, once to slog through a horrible slush-bog on a failed attempt at Kings Peak in late May or early June, and again in mid-September to successfully tag this state highpoint and ultra-prominence peak when it was dry. They contain a fair number of remote high peaks, and are between the Tetons and San Juans, so I am not sure why I have avoided them in the past. In any case, the weather was nice and I was in the area for a presentation about bike-mountaineering in the Andes, so Eric, Sam, and I piled into Eric’s car to drive up to their western end near Bald Mountain Pass. Greg met us at the trailhead, and we were soon headed toward Mount Hayden. 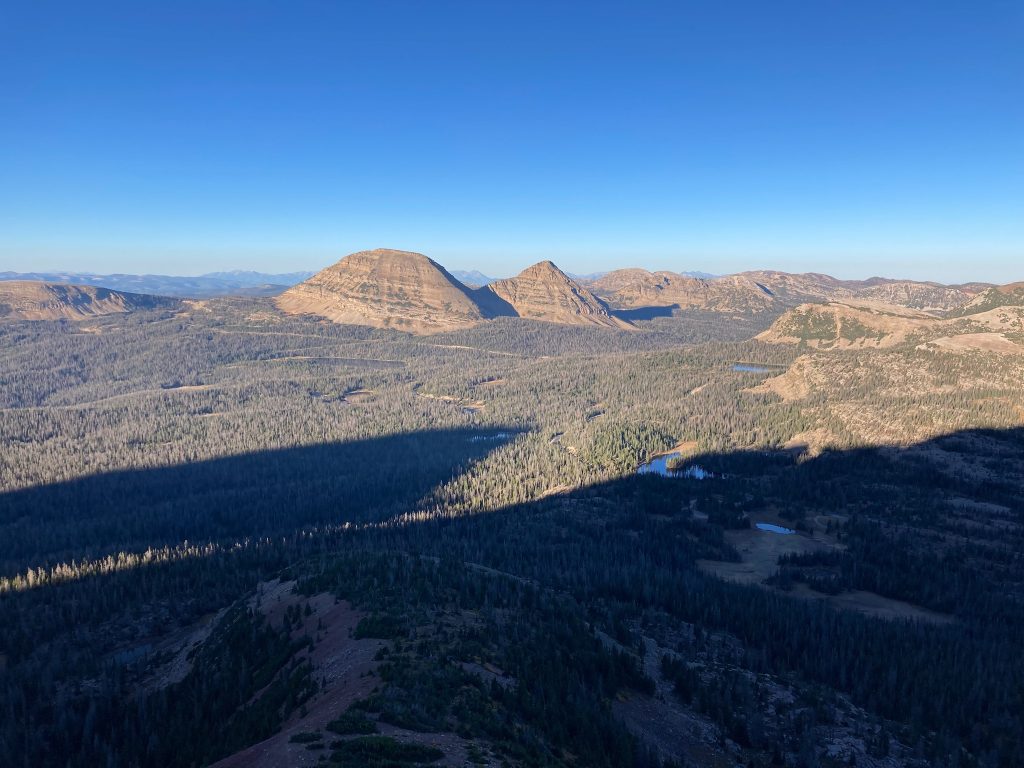 The others had all been there at least once, but were gracious enough to repeat the route while showing me around their local peaks. We almost immediately turned off the Highline Trail, a stock trail that mostly stays down in the woods, onto a climbers’ trail heading toward the ridge between Hayden and Agassiz. I was happy to just chat with people I had until recently only “known” online, while they handled the navigation. There are evidently two paths to the ridge, a loose gully and a spur ridge with a small scramble, and we took the latter. It was mostly easy travel through open woods and talus, with a short fourth class step near where the spur joined the main ridge. 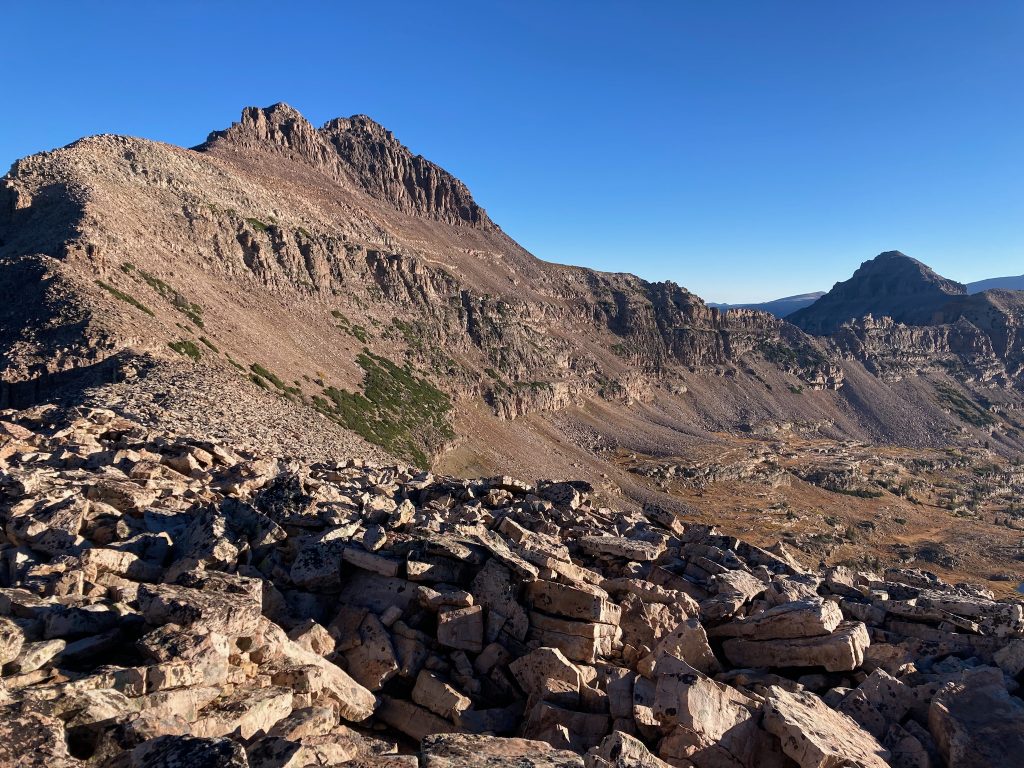 The Uintas are composed of something like quartzite, a hard, slick rock that makes for fun, blocky climbing, but also creates permanently unstable talus. The crux of many Uinta routes is getting from the valley trails to the ridges, through forest and tediously loose talus slopes. Once on the ridge, we turned north toward Hayden. The summit is guarded by several small cliff-bands, but cairns and a decent use trail led right of the obstacles, which were overcome via short stretches of third class scrambling. The ridge splits here, with one branch continuing north to Kletting, the other east to East Hayden.

Instead of taking either branch, we returned to the Hayden-Agassiz saddle. Eric was feeling out of sorts, and almost headed back from here, but he eventually succumbed to peer pressure, continuing over the first bump where the ridge turns east. Faced with another climb from this next saddle, he could no longer be persuaded to continue, and headed back to the cars, leaving the three of us to make the final 1000-foot climb to Agassiz. I don’t think any of us was feeling 100% — I may have been feeling the effects of my Covid and flu shots the day before — so we hung out for a long time on Agassiz’s summit, perched on a slab above the precipitous north face. Then Greg turned back, and Sam and I continued along the ridge over more bumps to Spread Eagle. It was better to go over the bumps than side-hill on the unstable talus, and I was dragging on the climbs, pushing to stay on Sam’s heels. 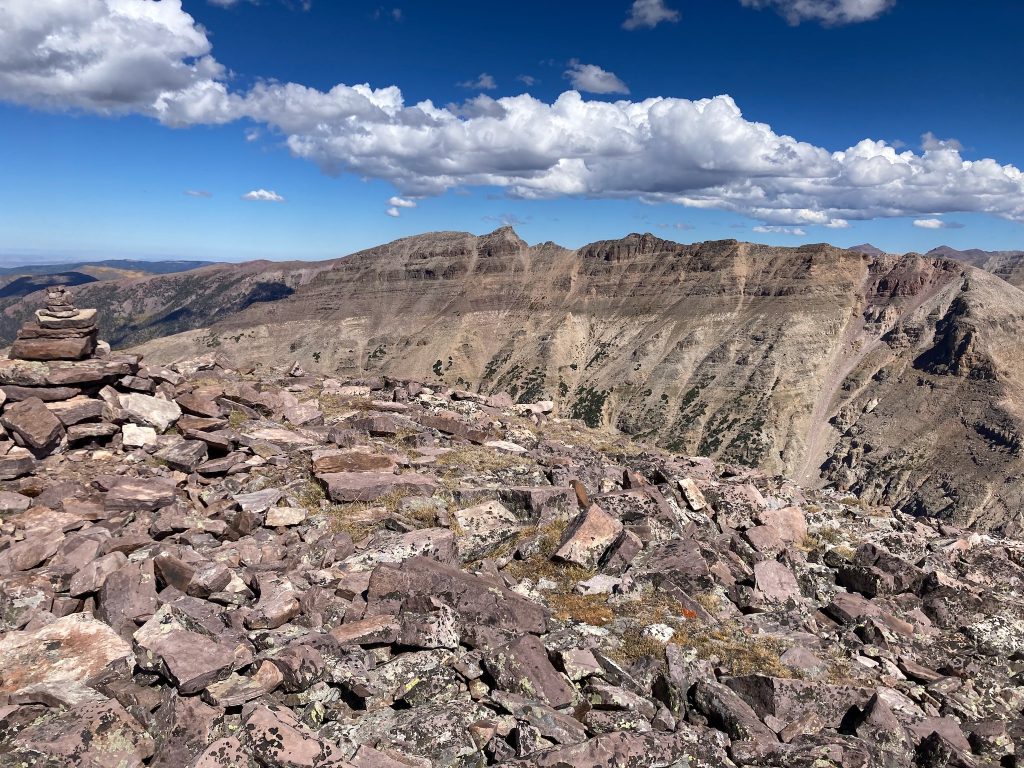 Our initial plan was to continue to Ostler, then return via the valley to the north and the Hayden-Agassiz saddle, but that seemed like more work than either of us wanted to do. Instead we wasted some more time on the summit, then descended back southwest to the lakes below our ridge. The slope was occasionally scree-skiable, but more often consisted of hard dirt or semi-stable talus, making it somewhat tedious. We stopped to empty our shoes at the base, then took off across easy slabs and meadows, finding occasional cairns as we descended into the woods. There we picked up the so-called Highline Trail as it made its dusty way through the forest.

We jogged a few stretches, but neither of us had much energy to dance through the rocks churned up and exposed by thousands of hooves, so it was a long, slow grind back to the trailhead. While we had surprisingly met no hunters on the trail, there were several cars at the trailhead. A confused hiker standing next to the large trailhead sign asked us where the trail was, then a “helpful” Utah cop drove by and asked us if we were having car trouble. Clearly it was time to move on, so we made the long drive back to the city, where Sam dropped me off at Eric’s house, where I enjoyed another night of civilization. I have always avoided Salt Lake City, but thanks to the loose fellowship of peak-baggers (the Brotherhood of the Register?), I have reason to return.

Agassiz and Hayden from Spread Eagle