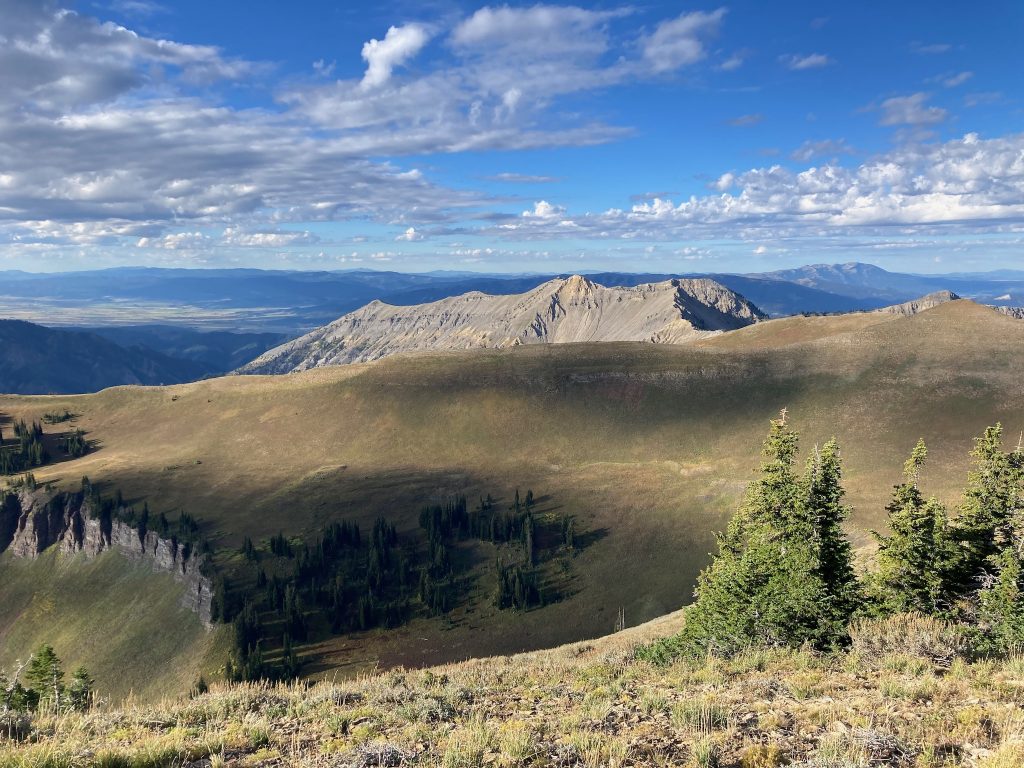 Deadhorse and Ferry are two peaks along the southern side of Indian Creek near Alpine, Wyoming. Ferry is in Turiano’s book and is the more impressive of the two, its chossy ramparts sticking out into the Star Valley. It sounded like an easy outing via the Cottonwood Creek trail, so I decided to make a loop of it and neighboring Deadhorse via the Red Creek trail. The trailhead was empty other than me on a weekday, even during hunting season, and I started around first light to avoid the forecast afternoon showers. The trail I wanted had seen recent horse traffic, following the valley a short distance before climbing steeply up the ridge to its right. 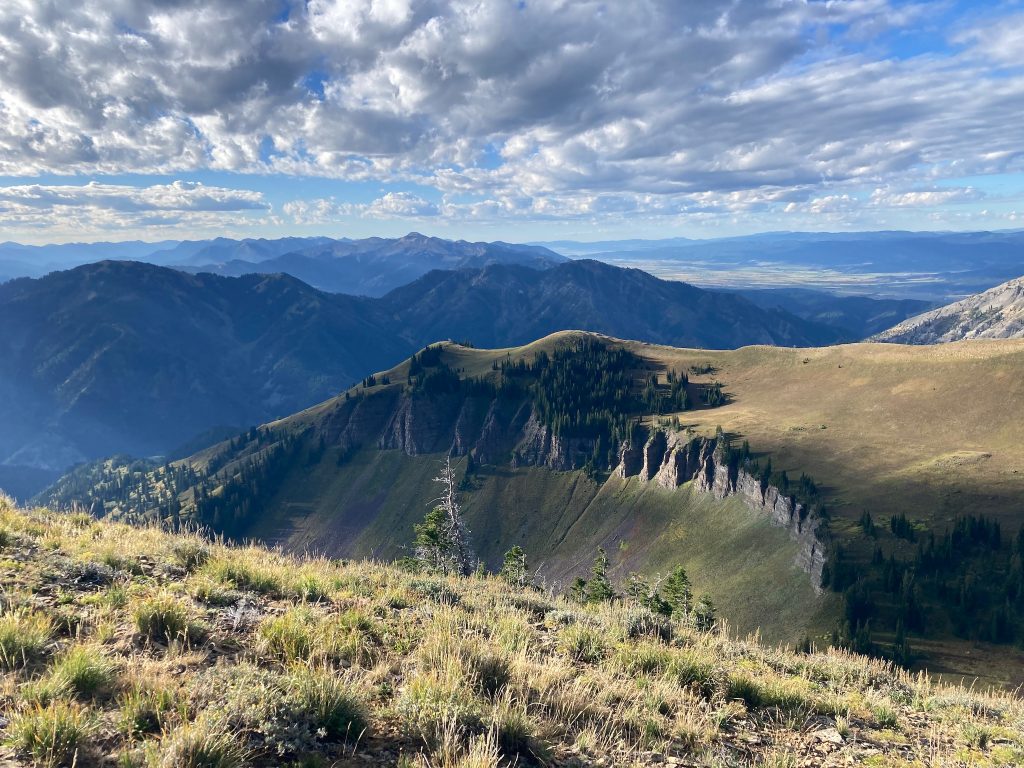 My original intent was to follow a spur trail on a high traverse to the saddle at the head of Cottonwood, tag Ferry, then return along the ridge to pick up as many bonus peaks as I wanted. However I saw no sign of this side trail, either as it branched off from the main one or looking down from the ridge to the open ground it crossed. I should have taken this as an omen, but was content to change plans and loop in the other direction. The trail became fainter as it continued up the ridge, but the occasional horse print reassured me that I was in the right place. It faded completely at one point, and I found some unpleasantly loose, steep dirt regaining the ridge after getting side-tracked on a game trail, but I continued to find easy travel and occasional signs of human passage all the way to the ridge. 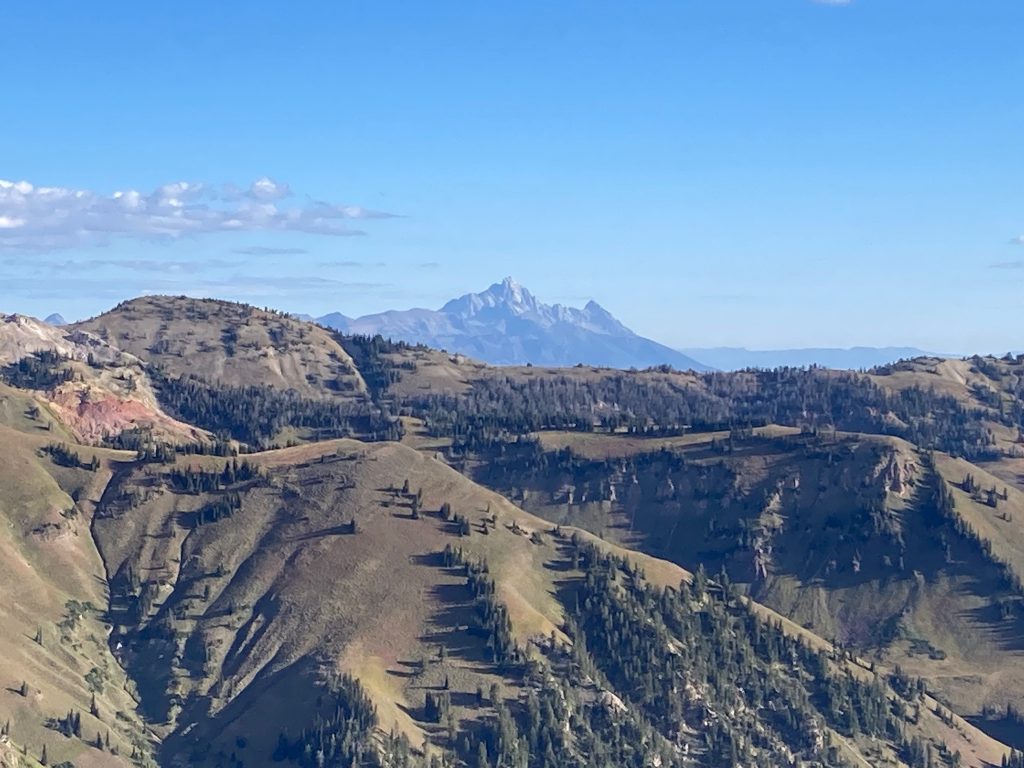 From the saddle I followed the ridge west, picking my way along game trails to get through the brush, loose slopes, and occasional scrub pines. I found a sad cairn on the summit, and had a fine view of the Snake River Range nearby, and the Tetons illuminated in the distance. Ferry looked far away, but the weather was holding, with only a few nonthreatening clouds in the sky. I returned to the saddle, then made my way over another unnamed peak that was in the way. On its summit, I found a great deal of sheep dung and a few surprising horse-prints. Whoever had made it up here was a good rider on a strange mission. 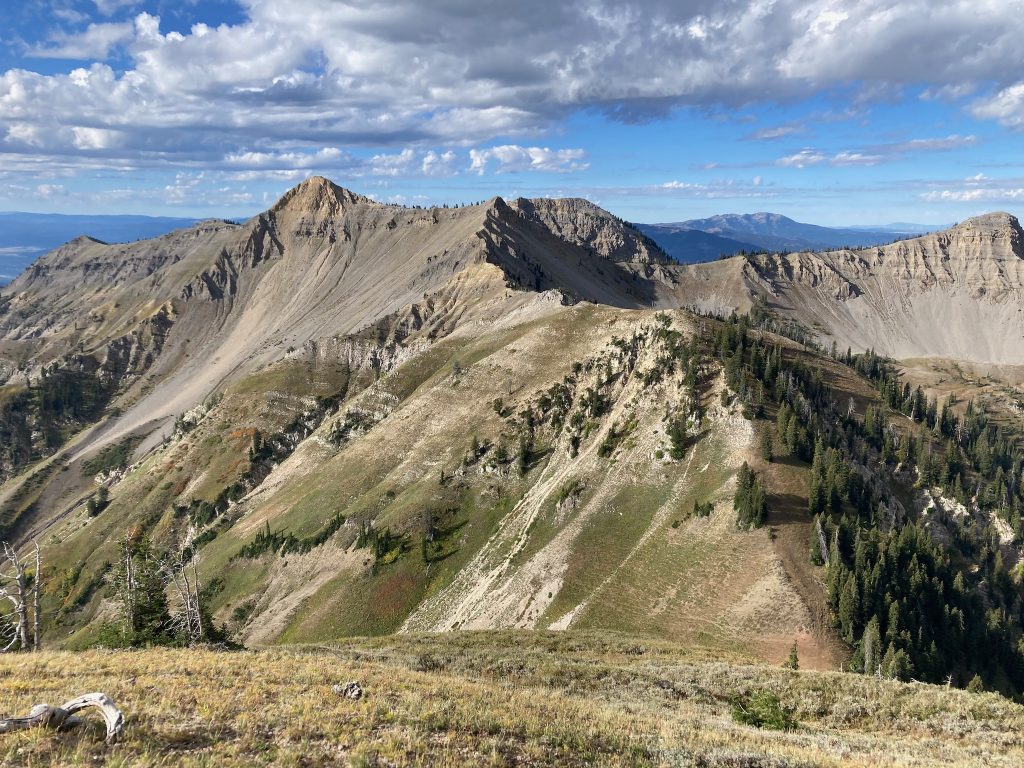 Ferry from above saddle

The descent to the final saddle before Ferry was steeper and more obnoxious than what had come before, a choice between loose scree and knee-high brush. The sheep and elk seemed to avoid this area, but I found the occasional game trail to ease my passage. Reaching the saddle, I expected to see at least some sign of three trails: the traverse I had hoped to take, the one leading down Cottonwood to the south, and another leading into Indian Creek to the north. However, other than an old metal post and perhaps a faint remnant descending north, I saw absolutely nothing. Ominous… 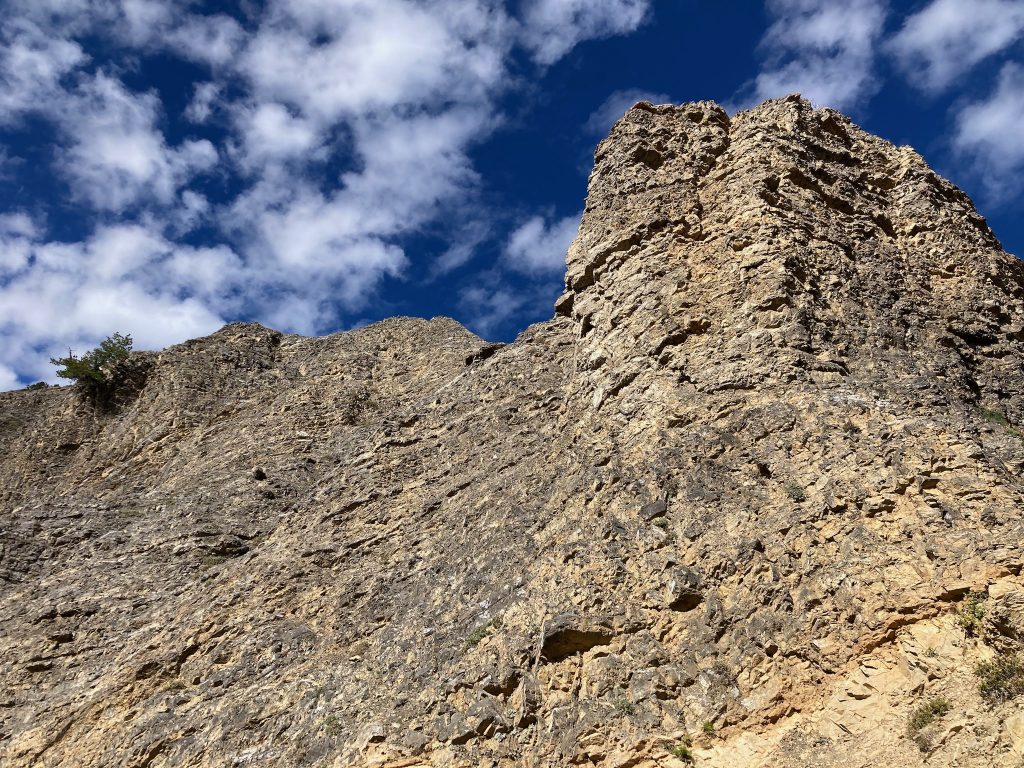 … But there was a nice game trail headed toward Ferry, so I put my worries aside and headed up. The ridge from saddle to summit is a good mile, with choss-cliffs in several places on the near side, but I did not expect any trouble. So it surprised me when I reached some darker towers and found my way blocked by a steep, crumbly buttress with sketchy-looking sides. I first tried traversing around left, picking my way along hard-pack with embedded rocks to peer around the corner. Perhaps my choss head was just not in the right place, but I did not see anything I wanted to climb. I was feeling defeated, but decided to check out the other side. An outward-sloping traverse along the seam between black and tan rock got me around the corner to what looked like easier ground, and I headed up. Yay! 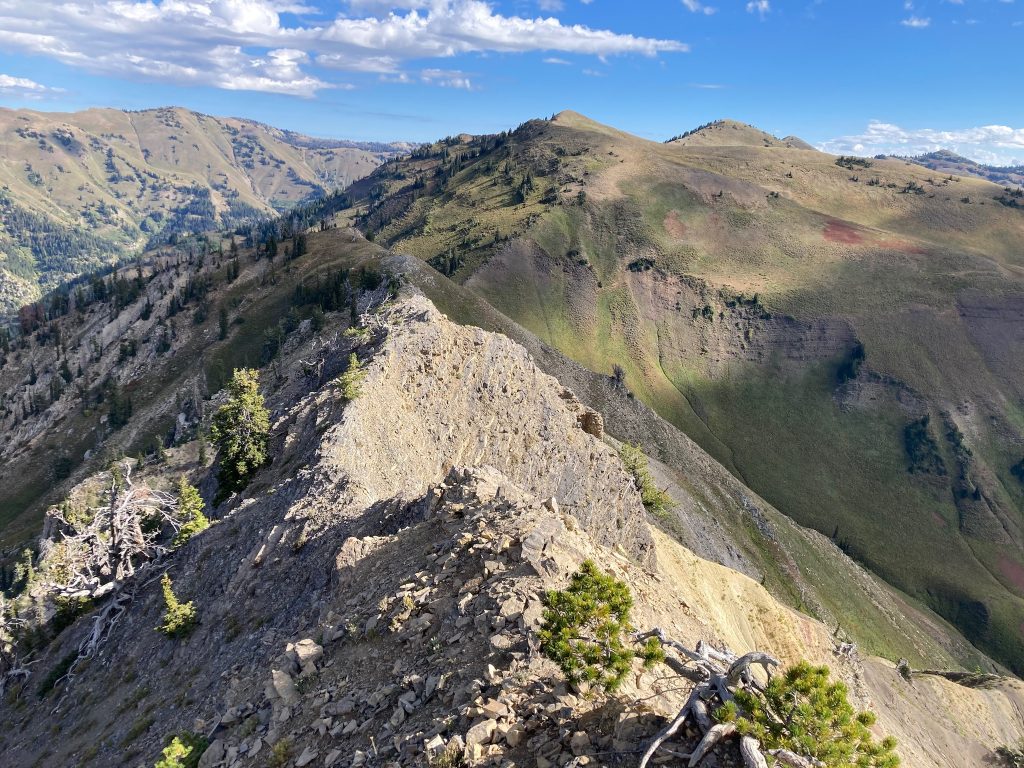 Choss ridge from above

Unfortunately things got steeper near the ridge, and I found myself doing the sort of cautious climbing I had hoped to avoid. It was almost certainly not harder than class 3, but the rock looked terribly untrustworthy. I proceeded toward the crest, kicking and hitting things, pulling some off, and brushing off ledges by repeatedly pawing at them with my feet until the gravel was all gone. The ridge itself was narrow but, as I had hoped, slightly more solid. I traversed and balance-beamed my way along, and was soon on less-exposed terrain. I had some more unpleasant loose stuff and hard-pack to deal with, but there was no more significant trouble between there and the summit. 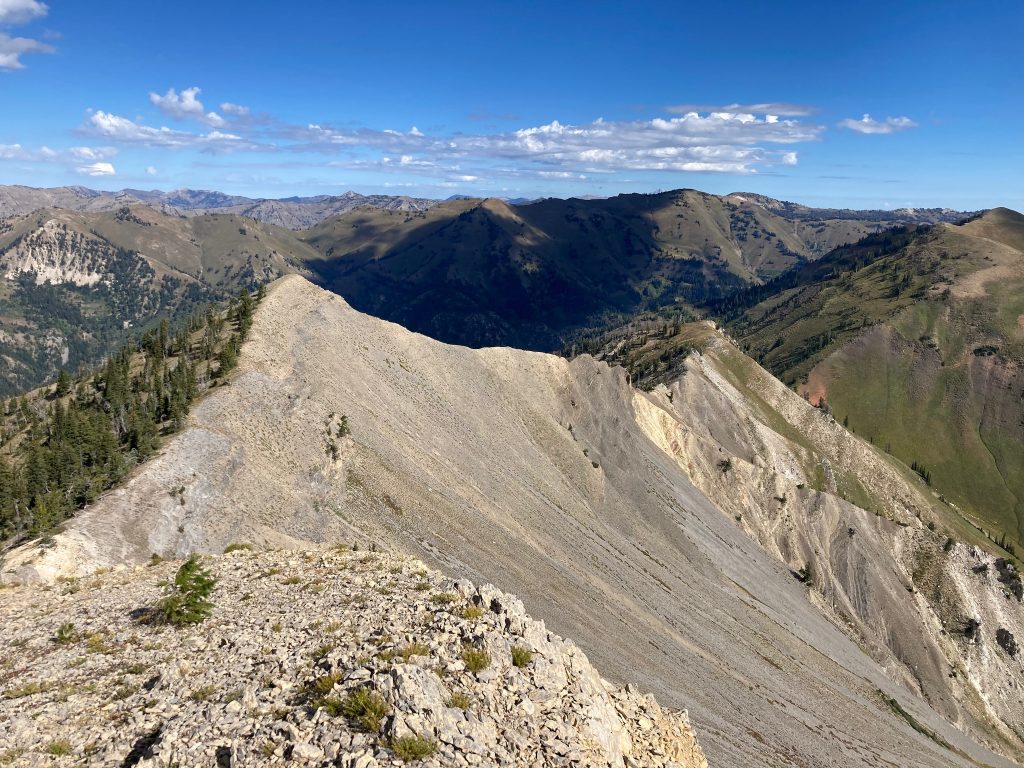 I was absolutely not going to return the way I had come, so I dropped down the ridge between Cottonwood and Sheep Creeks, planning to pick up the Cottonwood trail lower down where it traversed high above the creek. I had seen absolutely no sign of it from above, which was unsettling, but figured it would become better-defined closer to the trailhead. Leaving the ridge, I descended faint game trails to where the trail appeared on the map then, finding nothing obvious, headed downstream on the best-defined elk-trail. The local animals usually know an area best, and I would appreciate their help threading my way through the thickets of willows, or alders, or whatever bendy, dense, deciduous things I saw infesting the slope ahead. 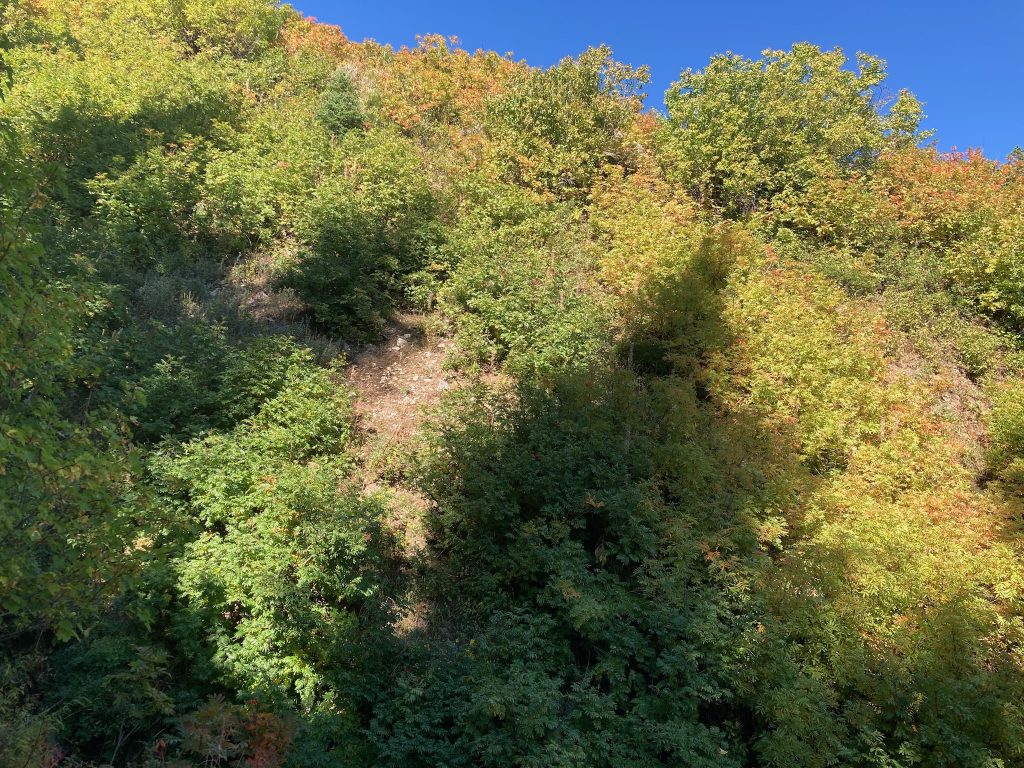 The slope was regularly split by steep-sided ravines, with a mix of what I’ll call “grass” and “alders” in between. The “grass” was actually a mix of shin- to knee-high dead plants including pea-sized burrs, nature’s Velcro that is so effective it even sticks to your hands. At the first, I spent some time looking up and down for signs of the trail, but eventually gave up and looked for wherever the animals crossed. Thrashing up out of the ravine through the alders would have been next to impossible, but fortunately game had broken a path. I continued like this to where the trail was supposed to switchback down a rib to the creek. The alders were frequently dense enough that I found myself standing on some to push them down, lifting others over my head, and still having a few grab at my ankles. I may not make it to Washington this year, but I will at least have something of the Cascades experience. 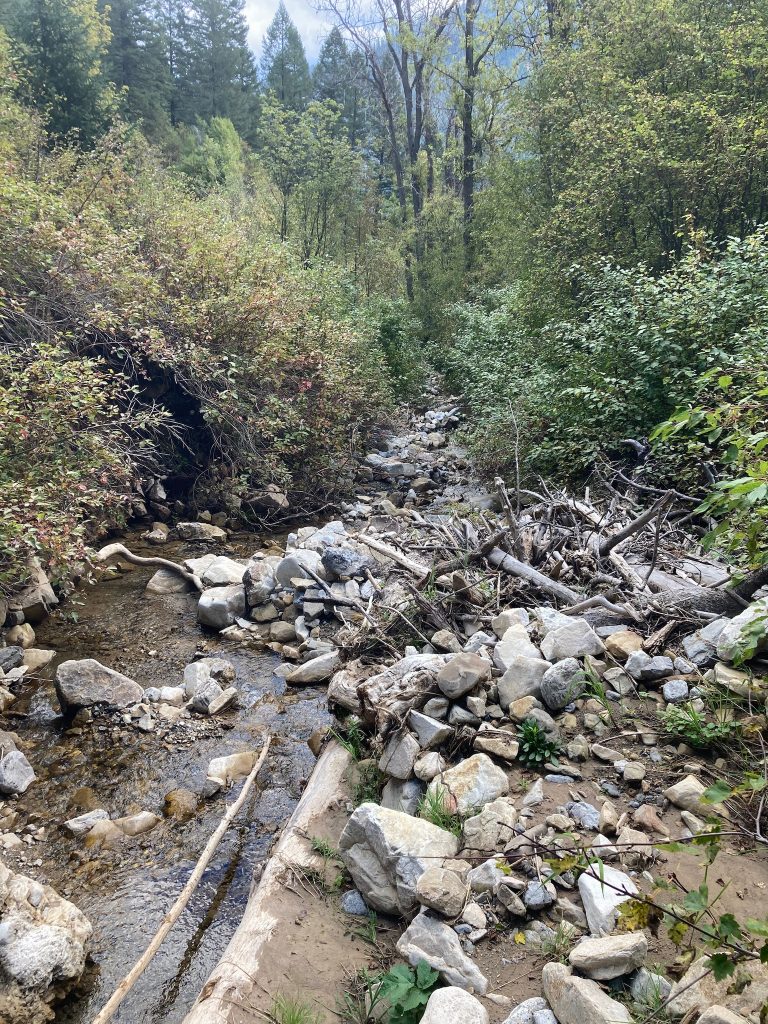 If the trail would be visible anywhere, it would be in the woods where it used to switchback, but I found absolutely nothing. Even the game trails sucked, and I found myself bashing downward through alders and deadfall. After this I gave up on the trail, which supposedly followed above the creek on its west side, a steep slope was covered in alders. At least it was late in the season, so I could boulder-hop down the creekbed. The creek meandered back and forth, and was just a bit too wide to jump, but it was still easier than the slopes to either side, and I rejoiced in accelerating to perhaps one mile per hour. After a few foot-soakings and a painful fall when a river rock rolled, I finally reached the road to find absolutely no sign that a trail had ever existed. No old parking lot, no sign, not even a helpful cairn. Later than expected, I made my way against early afternoon traffic back to Red Creek, then drove into town to recover.

Ferry from above saddle

Choss ridge from above