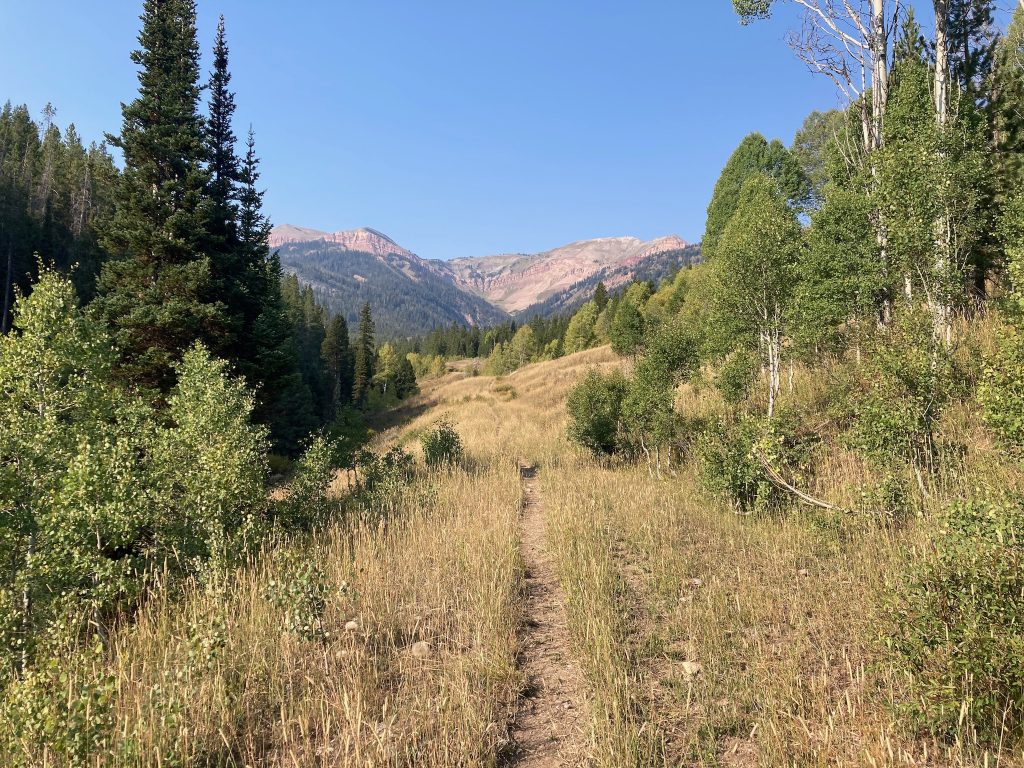 Clause Peak is the highest of a small group of peaks south of the Hoback River between Bondurant and Hoback Junction. The peaks are a sandstone uplift, so they are normally easy from the west, or along their north-south crest. However Clause is a long hike from any of those directions, forcing the lazy peak-bagger to climb it from the east, ascending Clause Creek via an old road, some bushwhacking, and steep choss. To add a bit more variety, I camped at the base of Cliff Creek Road and biked to Clause Creek. I passed many trailers along the way, no doubt some of the many hunters out enjoying the fine season. I don’t know if they were having much luck, but I have seen very few elk in my time up here, and have not heard any bugling (“screaming,” really). This could be because I have not felt the need to start early, especially when doing so by bike, but the valleys and meadows do seem quiet. 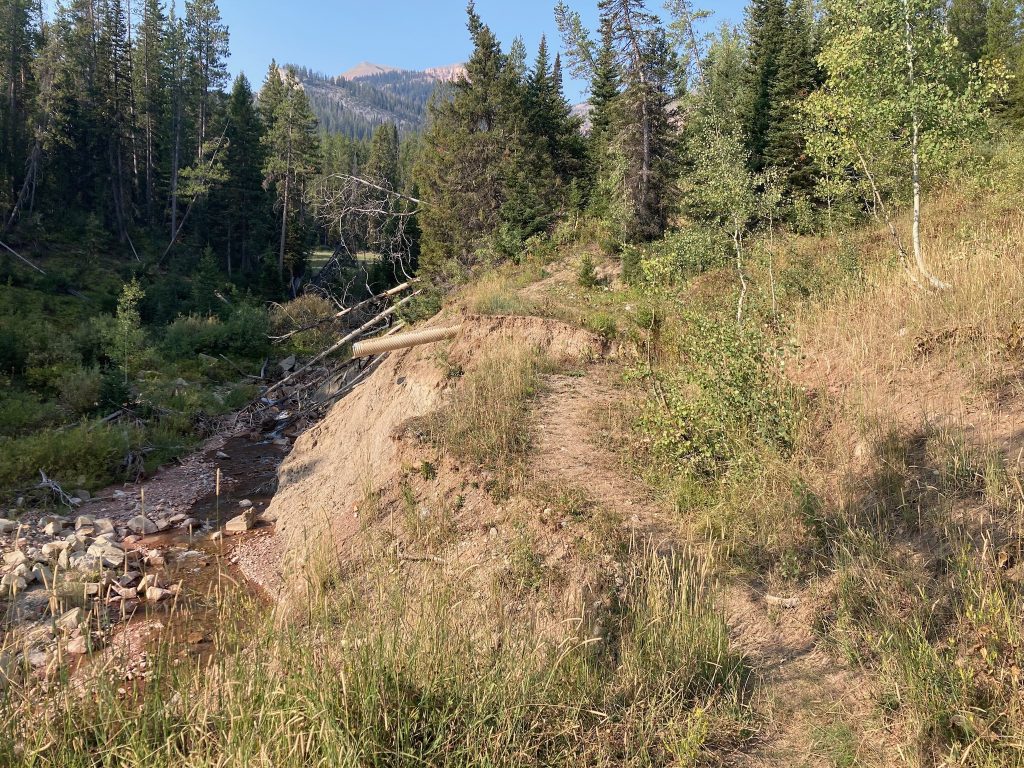 I had hoped to ride my bike up the decommissioned Clause Creek road, but the bridge was out and it looked somewhat overgrown. I stashed my bike behind a bush, then found a nice log crossing perhaps 100 yards downstream. Once on the other side, I found that the trail was smooth and well-used, and I could probably have ridden it to save some time if I had been able to balance across the log holding my bike. This would only have saved me a few miles of walking, though, so it was no great loss. 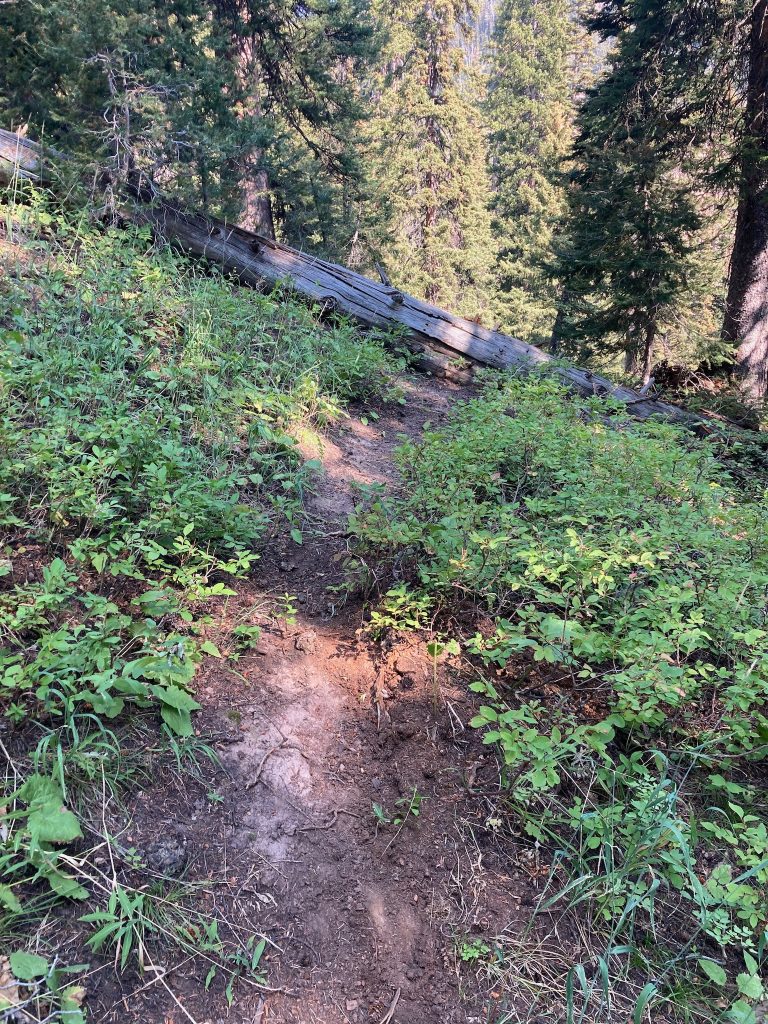 Where the road/trail crosses the creek to switchback up the south side, I left it to follow the creek’s north bank as Turiano’s route description suggested. I was initially dismayed by the deadfall and underbrush, but soon found an epic game trail climbing the crest just right of the stream. Though they were not continuous, and there was some thrashing, the game trails in this valley continued to impress me, with elk clearing a path lower down, and sheep taking over on the steep climb out of the creek to the bowl northeast of the summit. 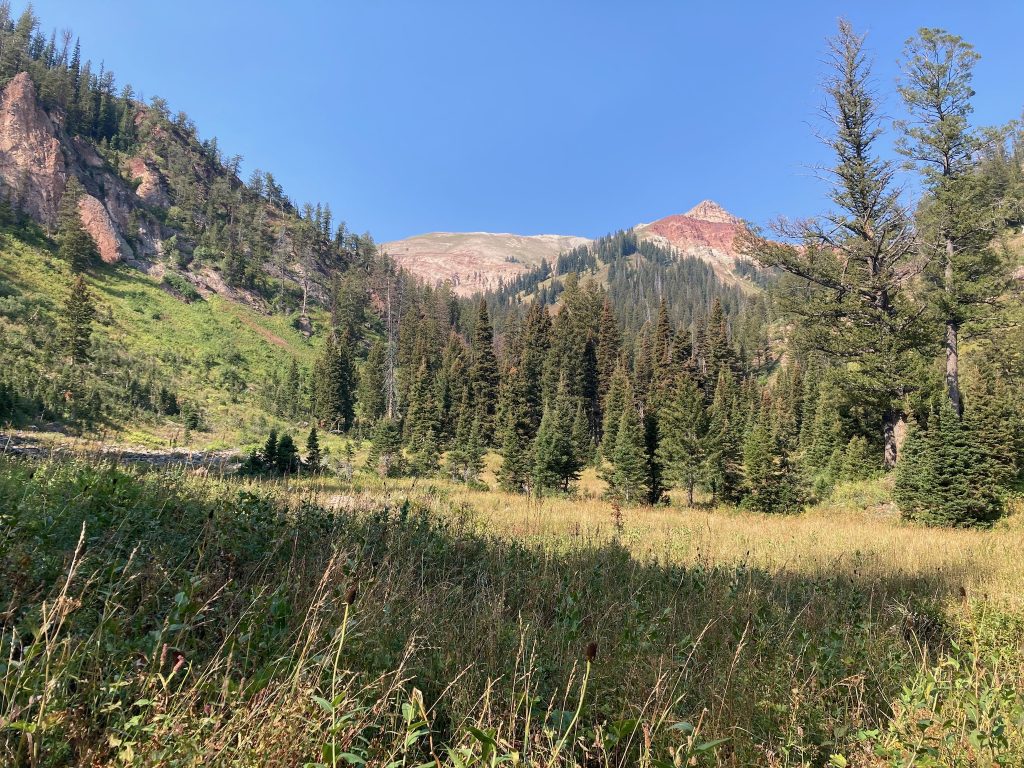 I followed game trails through the woods, briefly picked up an old trail appearing on the USGS map, then left that on more game trails to descend into the creekbed. This route would be underwater and infeasible earlier in the season, but the creek was low enough to almost jump across in most places, leaving a wide, plant-free area of rocks and gravel that was, while not fast, at least more efficient than the woods to either side. I had made the mistake of filling up water at Hoback Market, realizing later that the water is bearable for cooking or coffee, but too heavily mineralized to be drinkable straight. I therefore dumped it out and refilled from Clause Creek, which tasted much better and seemed to be above cow territory at this point. I eventually left the creek to the left, and found more game trails in the woods and meadows. 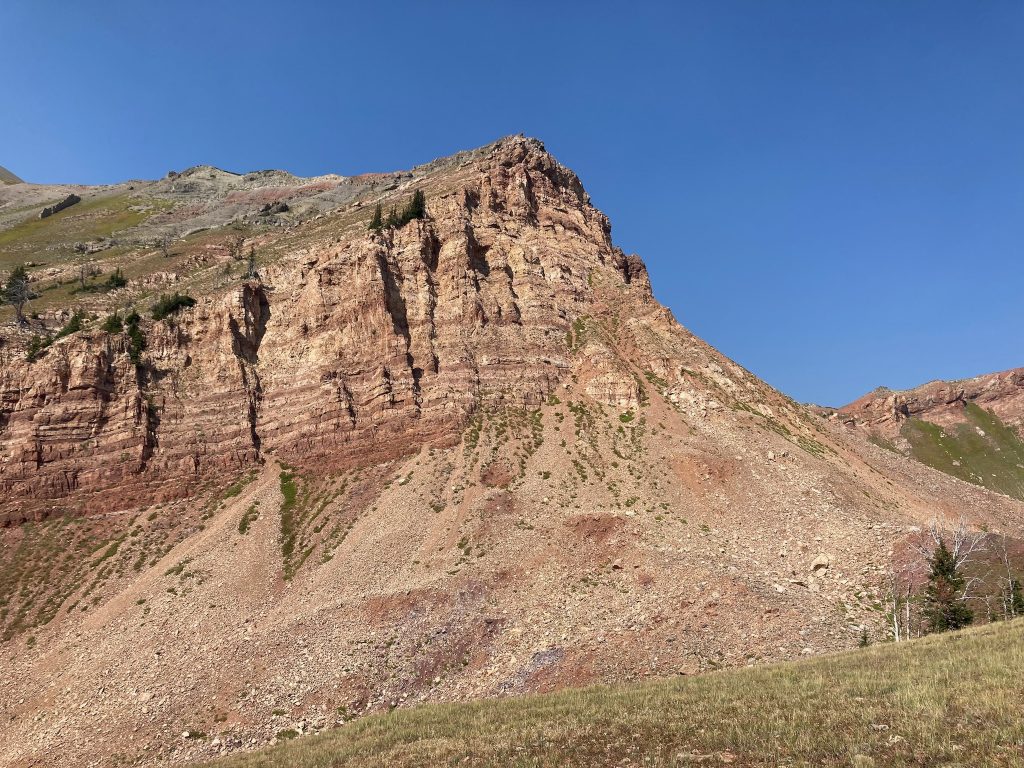 At the prominent split in the creek, I immediately spotted a massive trail leading straight up the spine between the two forks, and took it as it climbed most efficiently through the woods. The tracks changed from elk to sheep, and the path steepened, almost too much to follow without hooves. At one point I passed some sort of “sheep altar,” where the ground had been trampled in a circle around a single scraggly pine tree. I eventually emerged above treeline, and continued on the edge of a colorful north-facing cliff to reach the plateau along the base of the headwall. 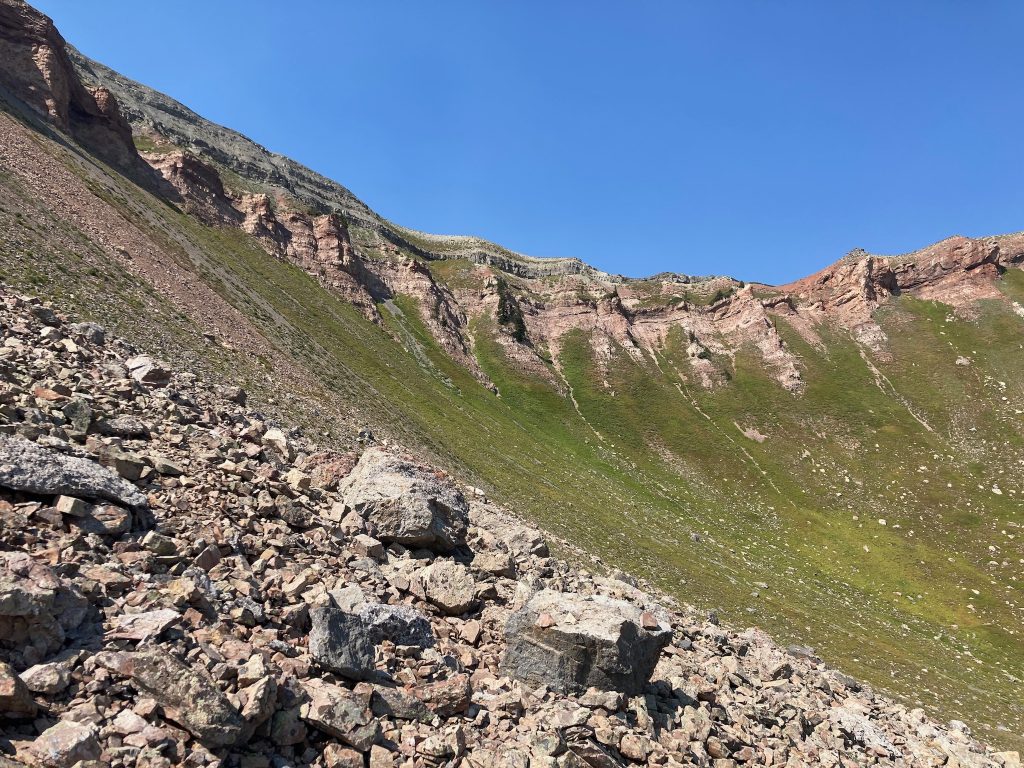 On to the chossineering! I made my way on a faint sheep-trail across a boulder-field, then aimed for the first likely-looking chute through the headwall. This consists of two layers of choss: rotten red rock below, and some even worse gray stuff little better than gravel above. The steep slope leading to the red cliff-band was miserable hardpack with the occasional loose rock on top, but at least low-angle enough to be home to some plants. I struggled up this for what seemed like forever, and was inordinately pleased with myself when my chosen gap proved to be no harder than class 3-4. 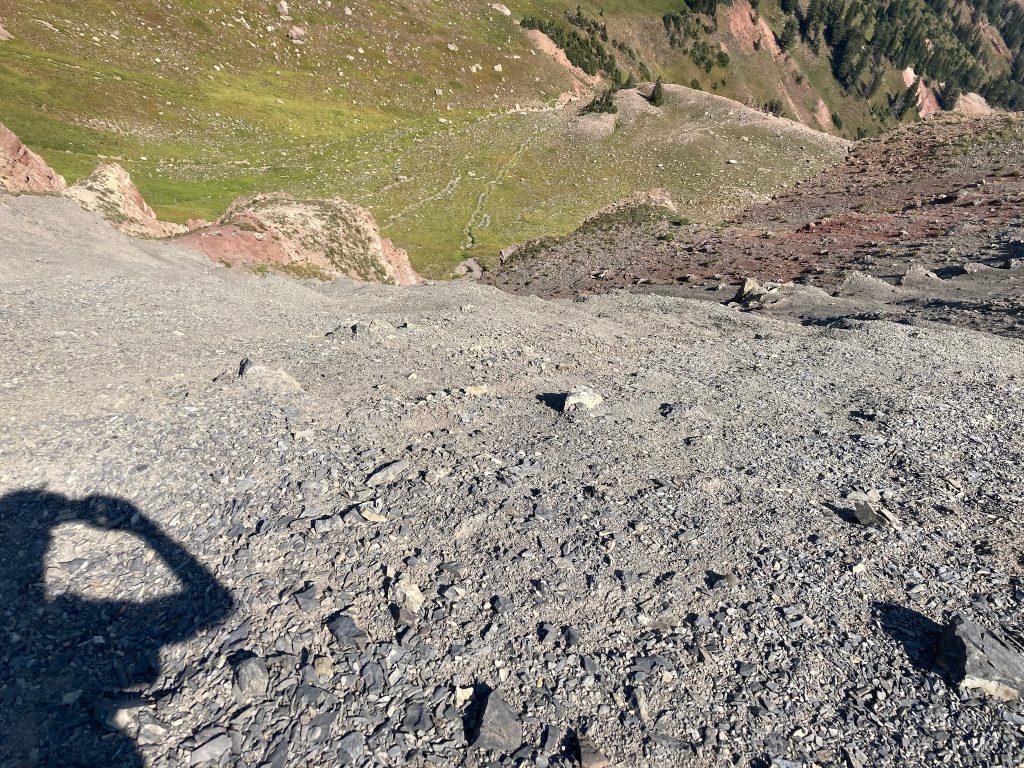 Would that the difficulties had ended there… The slope above was made of the awful gray rock, a mixture of hardpack and short cliff-bands, the joints all angled in the wrong direction. I started up cautiously, thinking it was short and low-angle enough that it would be unpleasant but brief, carefully testing every embedded rock and divot, sometimes kicking steps in the dirt. Partway up, though, things began to feel serious, and I needed a new approach. Downclimbing seemed like a bad idea, so… grabbing a nearby rock, I began chopping steps in the dirt. I have “stone-tooled” my way across hard snowfields in the Sierra and elsewhere, but it feels irrationally less sketchy on snow. With a dozen or so blows apiece, I methodically dug my way to the crest. Once there, I found a mostly-easy walk to the summit, aided by yet more sheep trails. 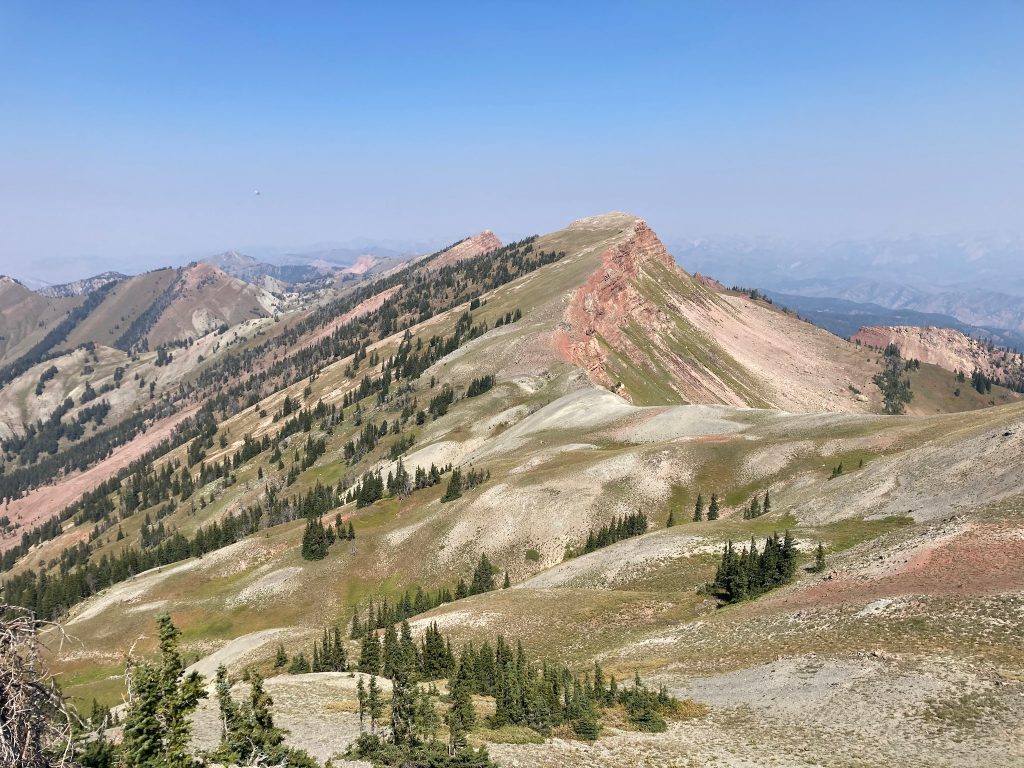 It was a clear day, but I did not enjoy much time on the summit. I was absolutely not going to descend the way I had gone up, so I needed to find the supposed “class 3-4” way through the headwall. The best prospect seemed to be at the next saddle north, where the deadly gray layer was thinnest. I made my way there, then began carefully scouting. It is much harder to see the best route from above than below, so it took me a couple of sketchy false starts before I eventually found a sheep trail leading along the edge of a gray cliff-band, then a traverse below that leading to a red gully in which I could crab-walk down to the steep plants below. This was certainly easier than my ascent route, but I would not recommend it.

Now it was just a matter of slogging. I found the game trails harder to follow on the way down, frequently checking my up-track to get back on course, but it all went smoothly. I heard one gunshot in the woods lower down, but I think I was wearing enough red and orange that the hunter would have been in trouble if he had hit me. Back at the Cliff Creek road, there was now another large truck, this one with a full-sized chest freezer lashed in its bed, an optimistic bit of cargo. I had a quick ride down to the car, then poked around the map on my phone for what to do next.