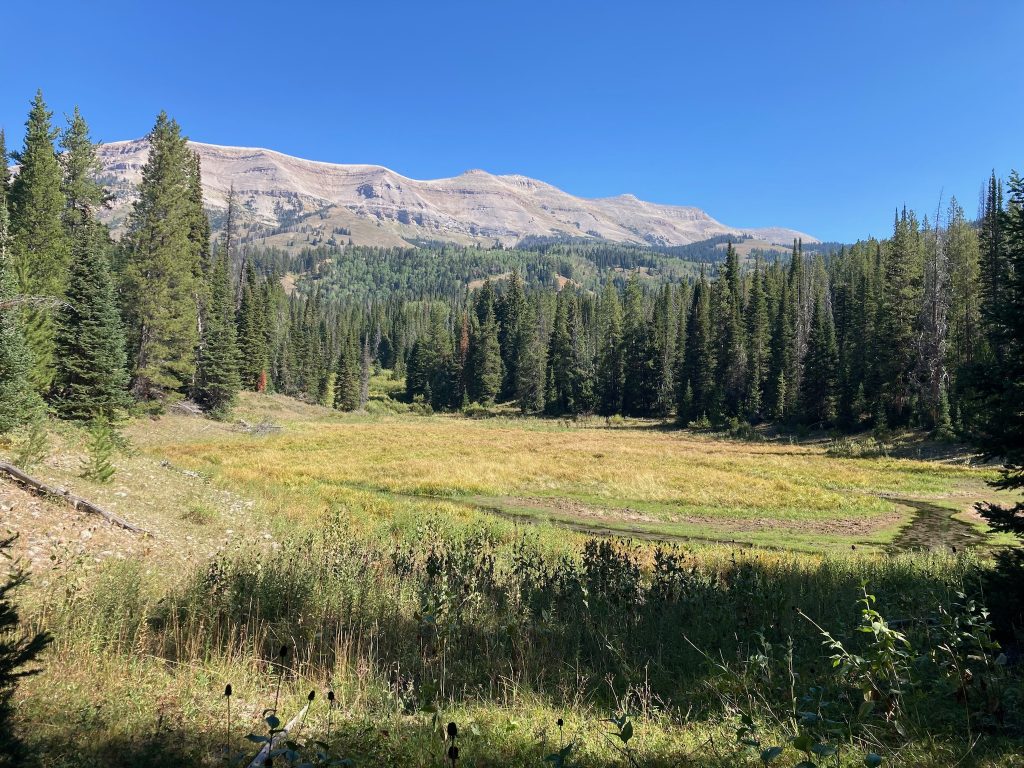 Tosi from the south

Tosi is a peak at the southeast corner of the Gros Ventre Range. From the south, driving from Pinedale to Hoback Junction, it looks like the apex of a broad uplift plateau. Perhaps it once was, but its north side has eroded away, leaving only a narrow rim of sandstone around a lower plain of some harder rock (limestone, judging by the color) to its north. Turiano describes a route from the south involving ten miles of dirt road and an unmarked hunters’ trail. Sometimes such routes have fallen out of use and faded in the decades since the book was published, as was the case for Ramshorn, but in this case the route was almost exactly as described, and still sees regular use. 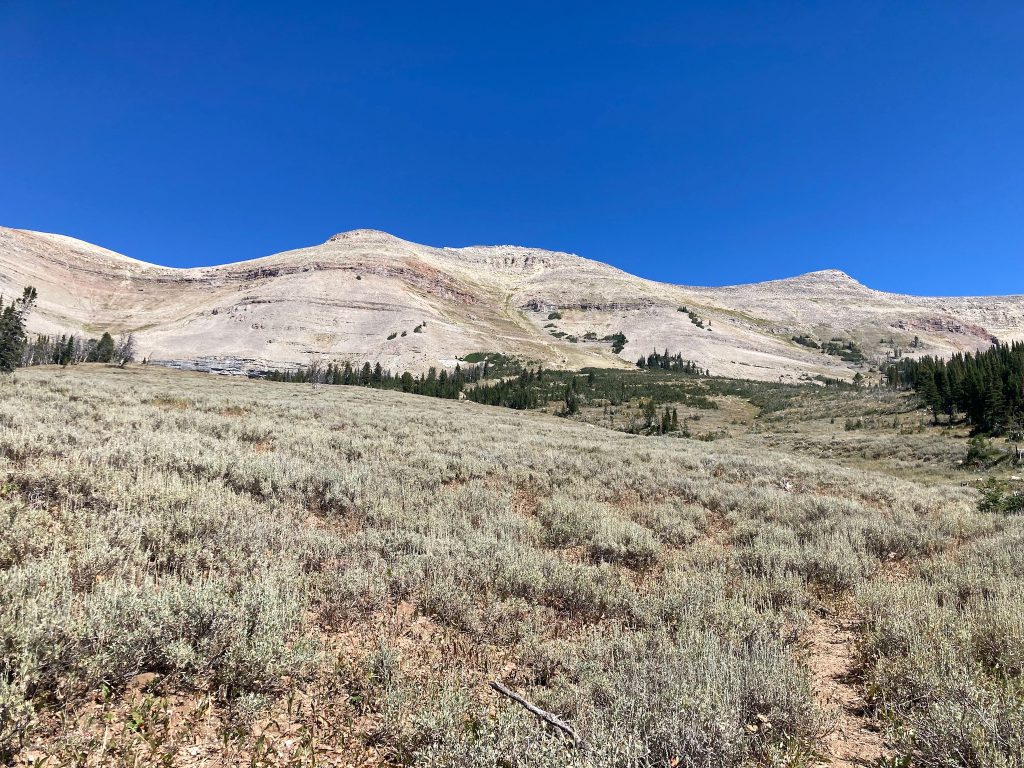 Not wanting to abuse my car more than necessary (driving to Big Sandy counted as “necessary”), I parked at the highway and rode the 3.5 miles of easy gravel road to where things get real. There were large camping trailers at all the established spots along the way, and a few big pickups pulling horse or ATV trailers at the junction. It was a weekend during bow-hunting season, and the locals were out in force. The rough part started with a descent too rocky and loose in places for me to ride, which had me worried about how long it would take to ride the remaining 6+ miles. Fortunately the road improved somewhat, though it was still frequently rutted and steep in places, and mostly too rugged for someone with my limited bike-handling skills to ride quickly on a gravel bike. Still, 9.5 rolling miles passed in an hour and ten minutes, much faster than I could have run them even if I were in running shape.

Near the end, I ran into a man and his son in a side-by-side, returning from an apparently failed hunt. The man gave me a thumbs-up for riding in so far, and was curious what I was doing. When I told him I was headed up Tosi, he warned me to “watch out for long-claws” before continuing. I know there are grizzlies as far south as the southern Winds these days, but I don’t really think of anything south of Mount Moran as “bear country” in the sense of having to carry bear spray. The Gros Ventres feel tame in a way that, say, the Absarokas do not, but I did turn my music off and make some noise while I was close to water or in brush.

At the junction with Elbow Draw, I stashed my bike in the woods, then set out to see if I, as suggested, had to ford Jack Creek. I did, but it was only fifteen feet wide and not even calf-deep this time of year. I splashed across in shoes, then wrung out my insoles and socks before continuing. Knowing that the trail followed the right side of the creek, I started off on that side, following various game- and cow-paths looking for them to resolve into a trail. This turned out to be a mistake which led me into a bog between two branches of Elbow Creek. I eventually sidehilled back above some beaver ponds and saw the real trail below me, well-used by horses and recently maintained. On the return, I found that the trail crosses to the west side of Elbow Draw above the beaver pond, fording Jack Creek just downstream of where I had. 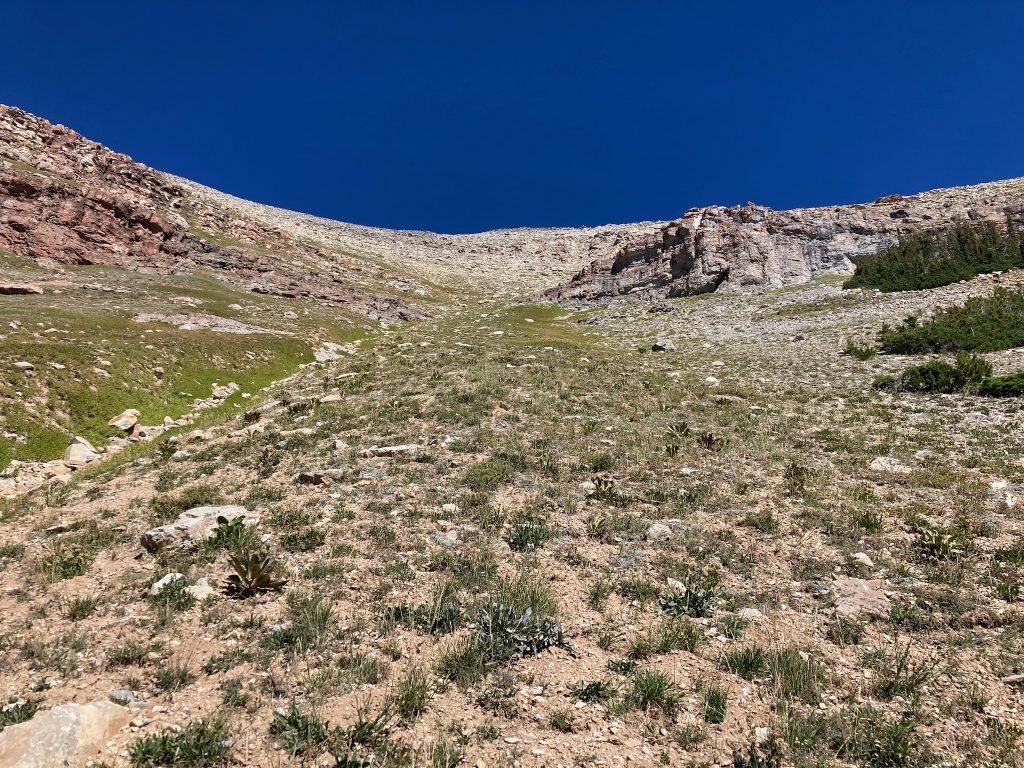 Once on track, I found easy going along the creek and up the ridge to its right, eventually emerging in open sagebrush almost directly below Tosi’s summit. The trail forked a couple of times, then seemed to end at a sort of highline traversing the base of the peak below the uplift’s cliffs. These cliffs are conveniently broken by a ravine directly below the summit, with enough grass in it to indicate that it would make a good route. I gave up on the human trail, following faint game trails and the path of least resistance through some scrub pines oft-abused by avalanches. 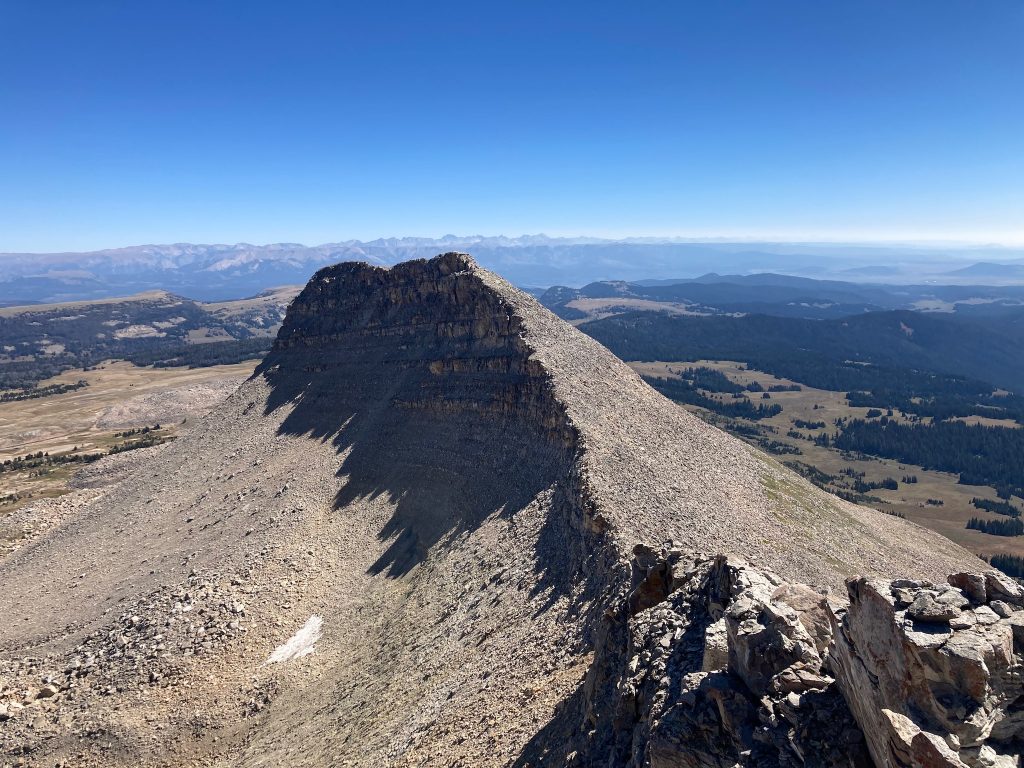 The lower ravine was a comfortable grade with stable footing, but it became steeper and looser higher up. Eventually the plants disappeared and I was left to contend with unstable sandstone talus. Above the choke-point, I bore right, searching for the least miserable way to reach the ridge. I could have stuck to the boulders, but scrambled more directly up a couple of short cliff bands to shorten the route. I abruptly emerged on the ridge, finding a near-vertical face dropping several hundred feet on the north side. I looked back east at a similarly-shaped shorter summit, then picked my way through ledges and talus to the summit, where there was a cairn and benchmark but no register. 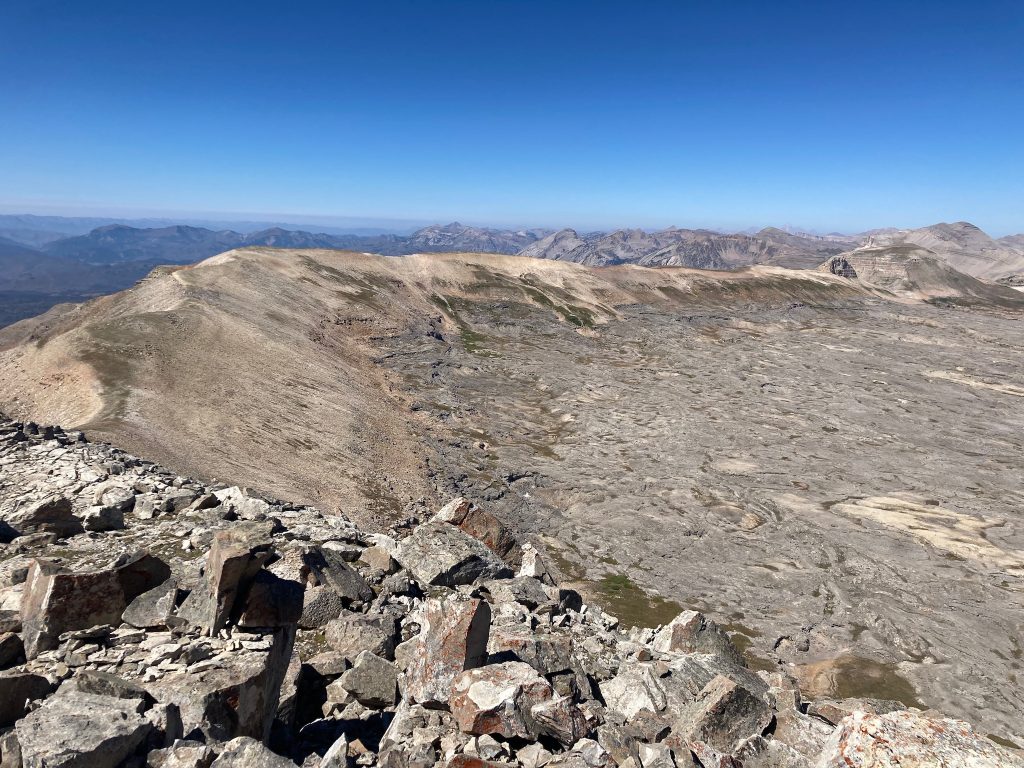 It was a relatively smoke-free day, so I could see mountains in every direction, from the northern Winds, to the east to the Wyoming Range to the south, to the Grand Teton rising behind the Gros Ventres far to the northwest. The most striking sight, however, was the lower plateau immediately northwest, where the gentle uplift had been worn down to a slanted plain of harder, gray rock, with a white-orange sandstone rim on its southern end. It reminded me of upper Darby Canyon on the west side of the Tetons.

I retraced my route on the return, finding the talus even worse on the way down. I had to crab-walk down most of it, maintaining three points of contact against shifting boulders. Even that was not enough once, when the boulders under one hand and one foot shifted simultaneously. Once back on the trail, I skipped back to Jack Creek, forded it in shoes again, and did not bother to wring out my socks afterwards. It was hot by then, and I figured they would mostly dry on the ride. I made better time on the net-downhill return, passing a couple of ATVs on their way in, and was back at the highway by midafternoon.

Tosi from the south