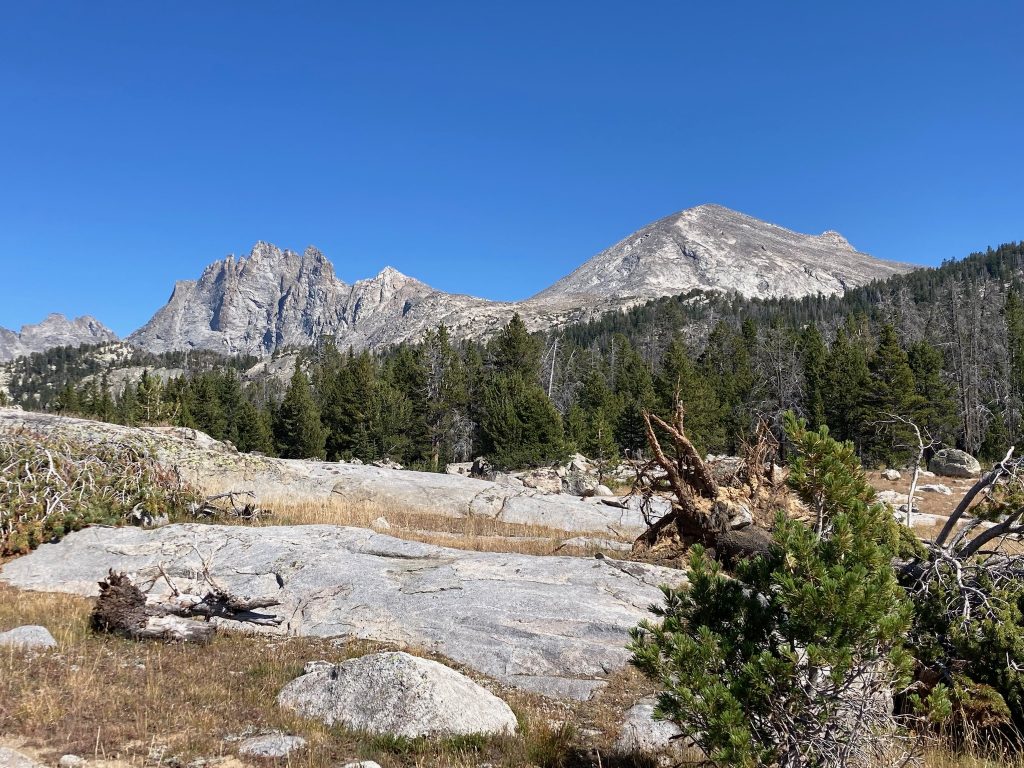 Mount Bonneville is a central Winds landmark, clearly visible from Pinedale to the west. Unlike most of its neighbors, which follow the southern Winds pattern of having cliffs to the north and east, and talus ramps to the south and west, Bonneville is a serrated north-south ridge with sheer sides. Its easiest route is a low-fifth-class scramble on its east side, derisively referred to by climbers as the “descent route,” and happily used by me. Raid Peak, its neighbor to the south, is of more typical shape, and therefore mostly boulders from the west. The cowboy and the shepherd are not friends, and peak and nearby Raid Lake are named for an incident in which the cowboys massacred well over a thousand sheep nearby. Confusingly, the benchmark on Raid says “Bonneville,” so the names have apparently moved around some. 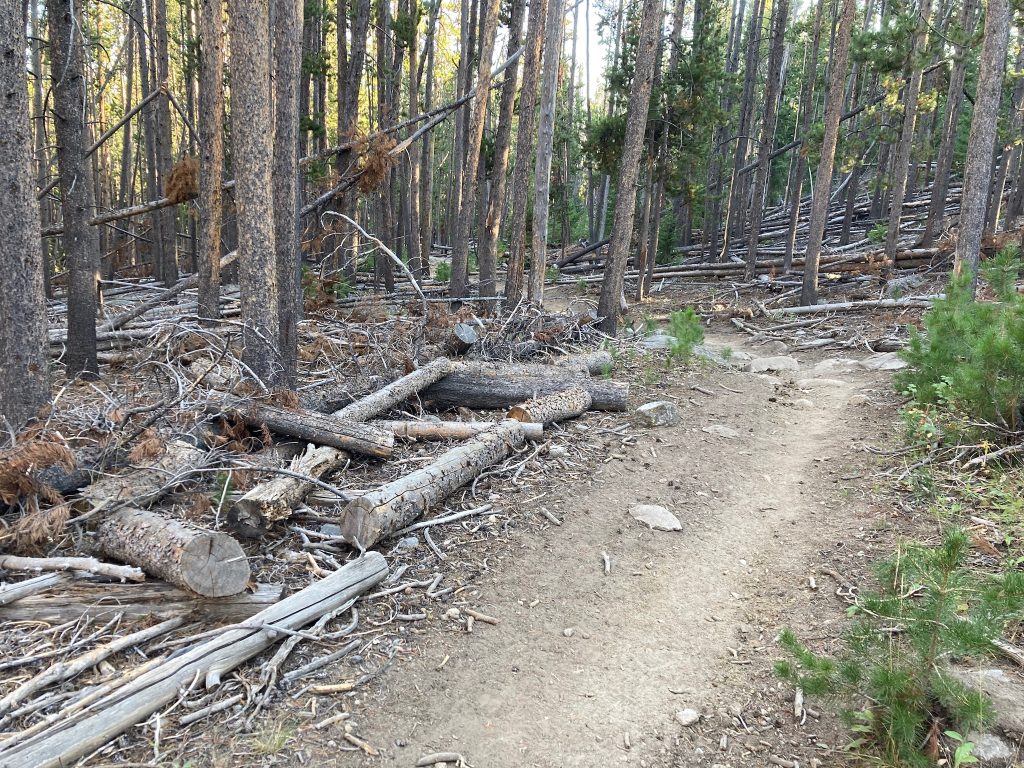 Pack trail is better than no trail

Bonneville can be reached from Big Sandy to its south via the Fremont trail, or from Scab Creek to its west; I chose the latter because it was new to me, and because I had gotten bored trying the former ten years ago. I started around first light, plying the stock trail at a semi-respectable pace. While nowhere near as popular as the Big Sandy trail, it is well-used, and the heavy stock traffic over the years has had the expected result: erosion, large exposed rocks lubricated by dust, big steps, and a thick coating of pulverized dirt and manure. It is more or less runnable on fresh legs, but requires some agility, and I personally obsess over my feet stewing in dust-manure-filtrate all day. 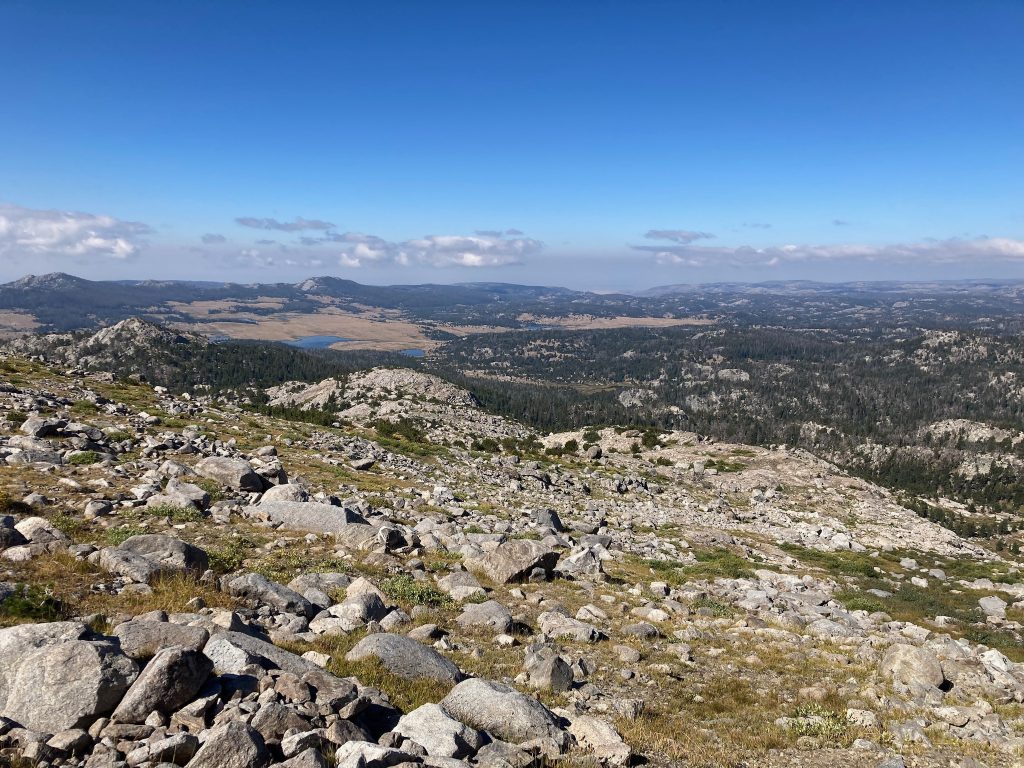 The western Winds feature a broad plateau separating the habitable valley from the peaks, much of it below treeline, so after an initial climb, the first ten miles or so of the approach were all in trees, covering rolling terrain past numerous lakes. This would doubtless make the area mosquito hell earlier in the season, but that is why I visit the Winds now, after they have frozen. It was pleasantly cool, with frost on my car and on the willows, and I started in my hoodie and mitts, keeping the hoodie well into the morning. 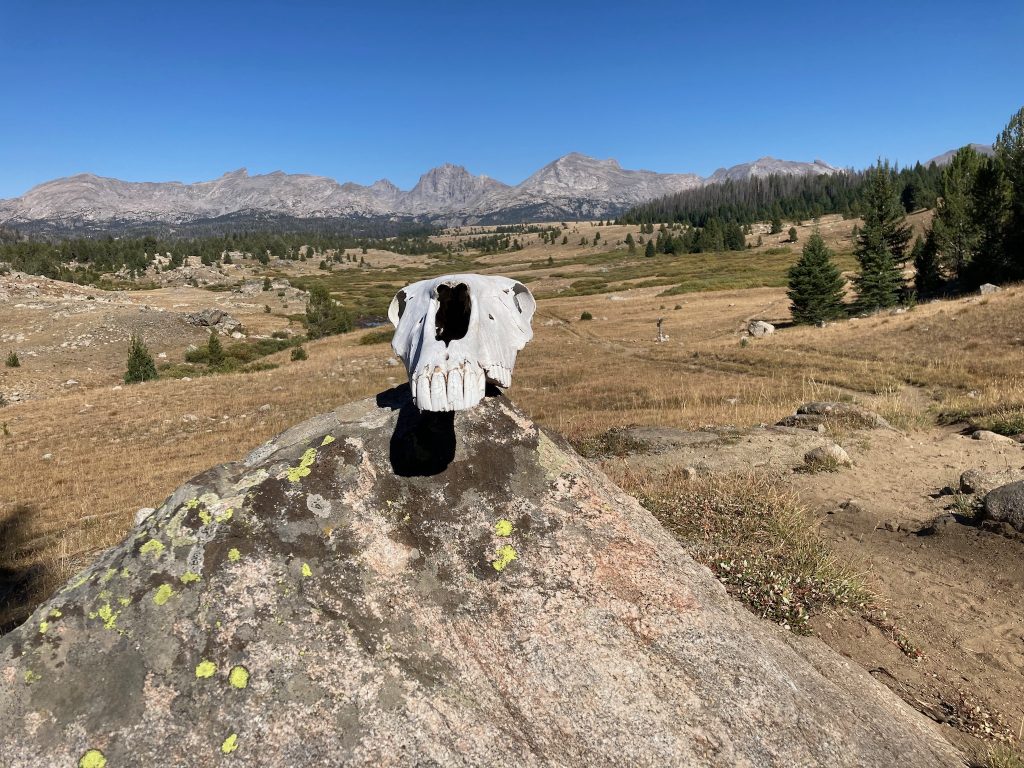 The trail finally breaks out into a long meadow and splits, with the left fork going to Dream Lake. I could finally see my peaks from here, barely visible while backlit in the smoke. There are more junctions in extensive and confusing Winds trail system, but the correct direction is usually clear. Shortly before Raid Lake, I turned off on a well-used but unofficial trail to Bonneville Basin, which follows a stream for awhile, then climbs through more woods to a bench with several lakes. The trail rapidly fades to little more than a game trail before the first large Bonneville Lake. 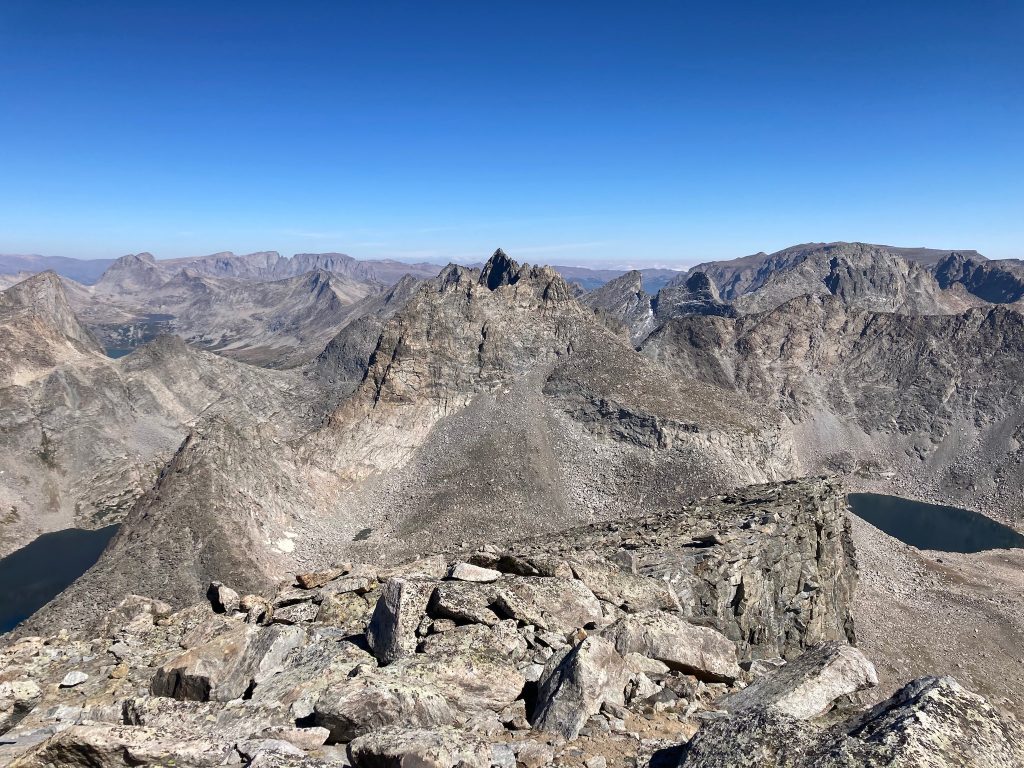 I left the trail at the lake’s outlet, passing a guy’s camp at a respectful distance, aiming for the Bonneville-Raid col. Finally above treeline, I found some easy grass, bits of use trail, and then some excellent slabs leading me toward Raid’s west side. The standard route climbs its north shoulder from the col, but the west side looked doable and more direct, so I headed straight for the summit. I found some enjoyable class 3-4 scrambling at the base of the slope, then a long but moderate boulder-hop to the summit. The sheer east side was much more impressive — the other approach to Bonneville clearly has better views. I found a large cairn, an unreadable wooden sign, and an old bottle with a single scrap of paper in it, suggesting that the peak does not see a lot of modern traffic. 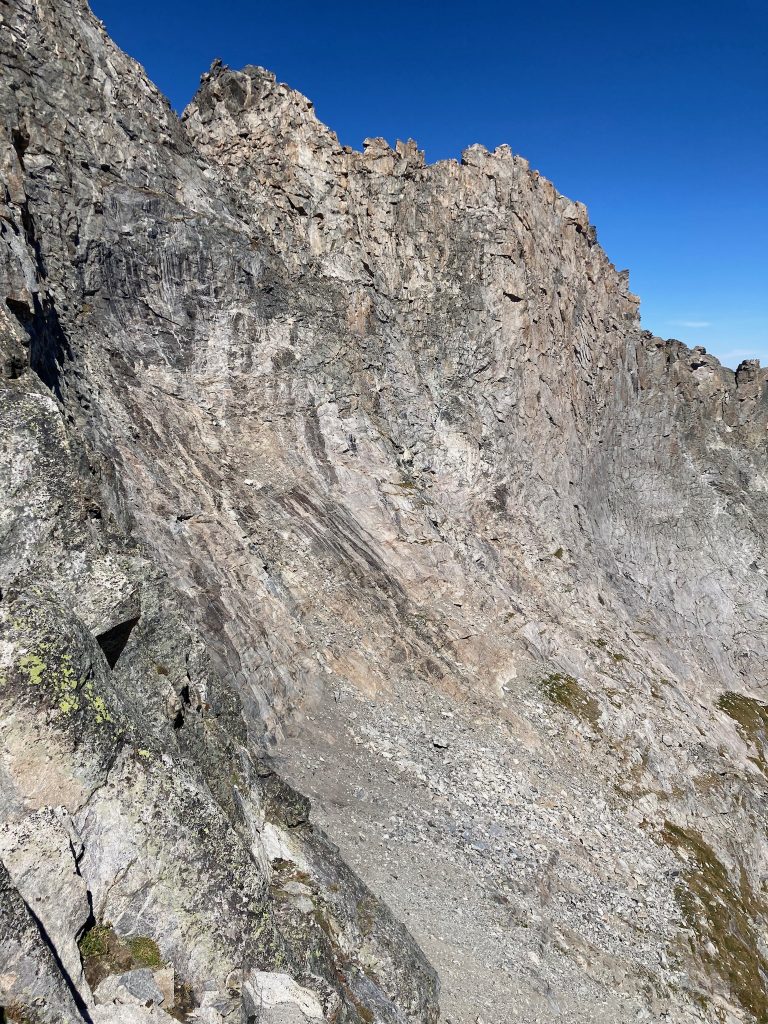 The descent north to the col was tedious, with larger and somewhat less stable talus than the west side, but no particular difficulties. The route to Bonneville’s upper east face was clear, a talus slope leading to a chute left of a cliff band. I followed a faint trail a short ways down the east side, then took off across the boulderfield. Rounding the southeast shoulder, I found myself cliffed out, and had to descend a bit to traverse onto the face. This is shown as a permanent snowfield on the USGS map, but is now the expected hard-pack and rubble. Continuing north, I reached fairly clean slabs crossed by ledges and ramps, which looked like the route. 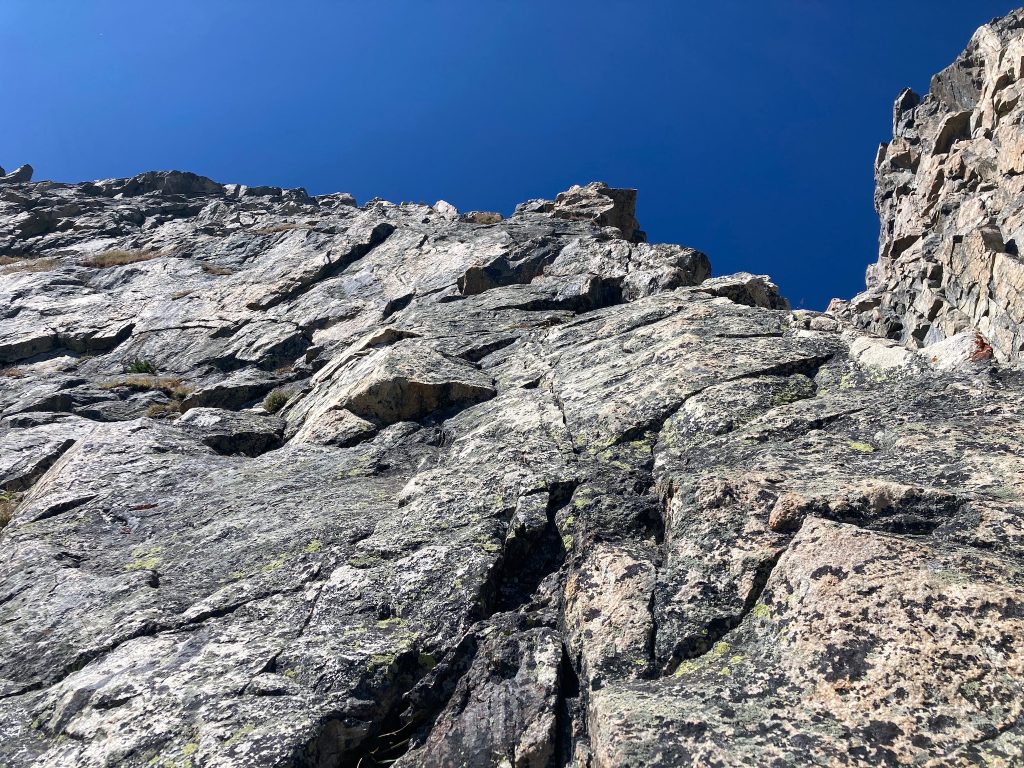 I climbed a series of black ramps to the edge of a couloir, then stayed near the couloir up to its notch in the summit ridge. The climbing was mostly class 3-4, with perhaps a few fifth class moves, and I felt surprisingly comfortable given my lack of recent scrambling. Unfortunately the crux was finding my way from the notch to the summit. The ridge itself is too steep, so one must traverse onto the east face, then pick one’s way up a choose-your-own-adventure obstacle course. After trying a slab traverse and backing off, I went lower and farther south, then made my way back up to the summit, passing a couple old rap stations along the way. 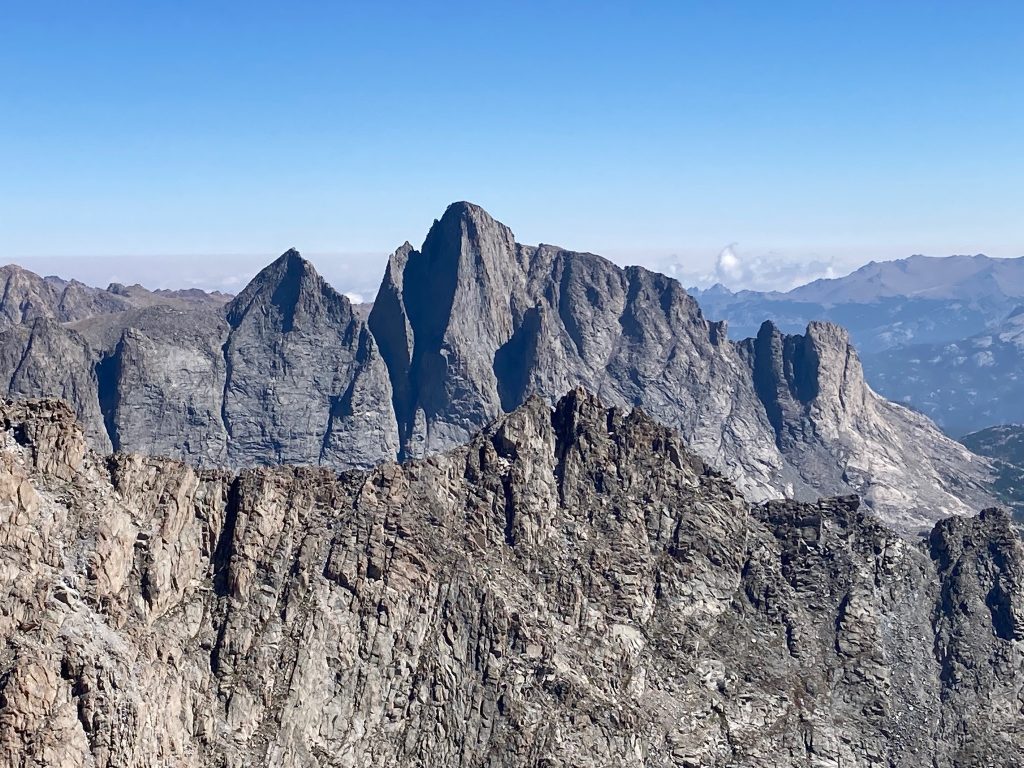 The summit block itself presented a final challenge. I initially scrambled up to its south side, but found a couple of moves there a bit too spicy. Traversing back around north, I found a short a cheval or balance-beam, then an easier traverse along the west side leading to a moderate finish. There was no register or benchmark, but a comfortable seat, so I enjoyed the mostly smoke-free views for awhile. To the south I could make out Lizard Head and the Cirque, with Wind River, East Temple, and Temple behind them. I recognized Pronghorn nearby to the north, but not much beyond that. To the east, Musembeah dominates the view with its huge west arete. I will have to look into the possibility of approaching it from Big Sandy to avoid the costly fishing license required for eastern approaches. 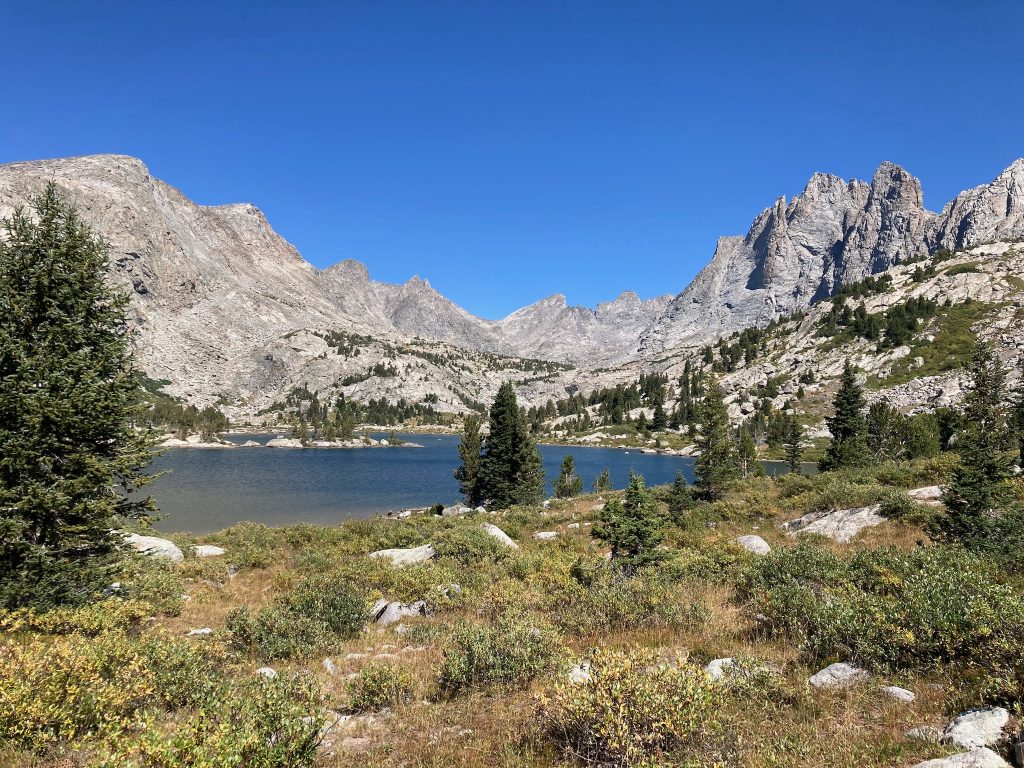 I carefully retraced my route to the base of the face, found a slightly more direct one back to the col, then crossed more boulders and turf to rejoin my ascent route. Once back at Bonneville Lake, everything was over but the slogging. I jogged as I was able, but this was my longest day on my feet in almost two months, and my body was starting to protest. Back on the official trail system I passed five kids with high gaiters and monster packs, doubtless NOLS-ies, but otherwise had the trail to myself until I was back in the woods. It was a Saturday during bow hunting season, so I met several parties headed in, mostly with stock. There were the usual men with horses, but also an entire family walking with a herd of pack-goats and a couple of alpacas. Awesome! I also came upon a couple of young women on horses headed out, who very politely moved off the trail into a field to let me pass, a striking contrast to the usual packer entitlement. With some awkward jogging, I was back at the car in under 12 hours, but felt as beaten-up as if I had done a longer outing.

I don’t see myself using this approach again, as it is long and only useful for a handful of peaks. I am glad I at least saw the central Winds, but don’t anticipate dayhiking more peaks there. They are hard to reach, not particularly high, and while they have some impressive faces, most are too hard for me by their interesting sides, and boulder-hops otherwise. I could see myself backpacking through and tagging some summits along the way, but not this year.

Sunrise on some lake

Raid and point south from Bonneville

Pack trail is better than no trail