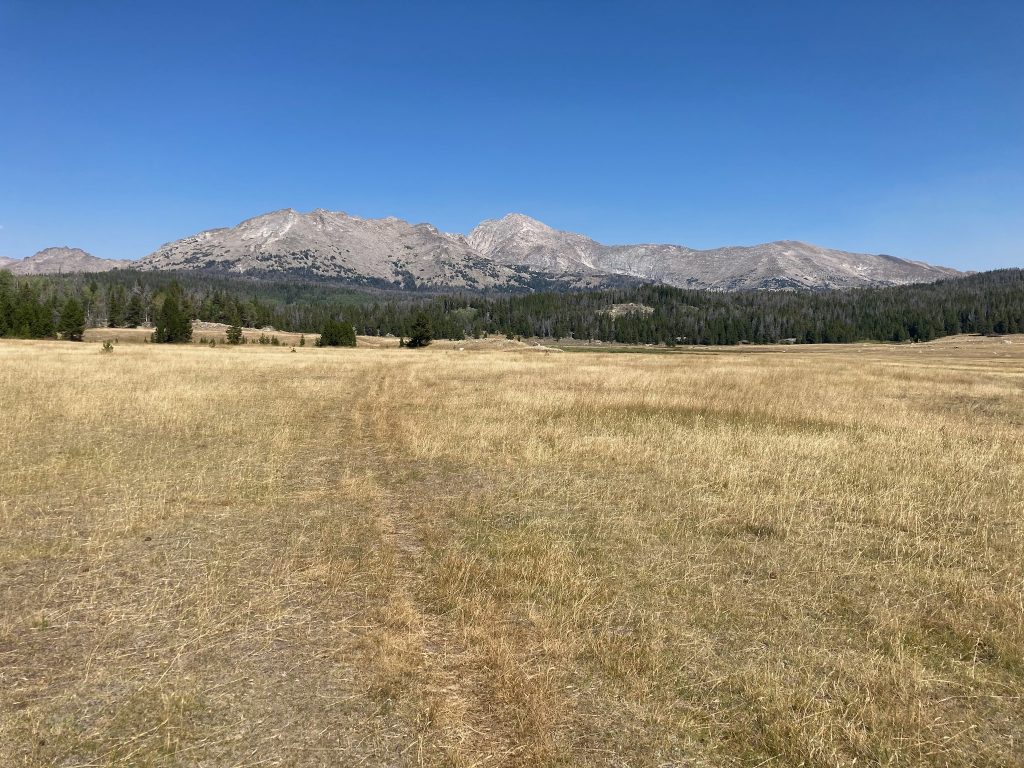 Temple is a landmark of the southern Winds, rising just shy of 13,000 feet with a gentle south slope leading to a sharp prow over a precipitous north face. It is one of a line of three similarly-shaped peaks at the southern end of the range’s high section, along with East Temple and Wind River. It had impressed me last year on my two ascents of the latter, and it is in Turiano’s book, so I made plans to climb it while I was in the area. The easiest route is probably via Big Sandy Lake and Temple Pass, but I had been to Big Sandy the previous day on my way to Lizard Head, and would not enjoy repeating the dusty slog. Turiano’s preferred route is via Sedgewick Meadows, starting a few miles south of the Big Sandy trailhead. 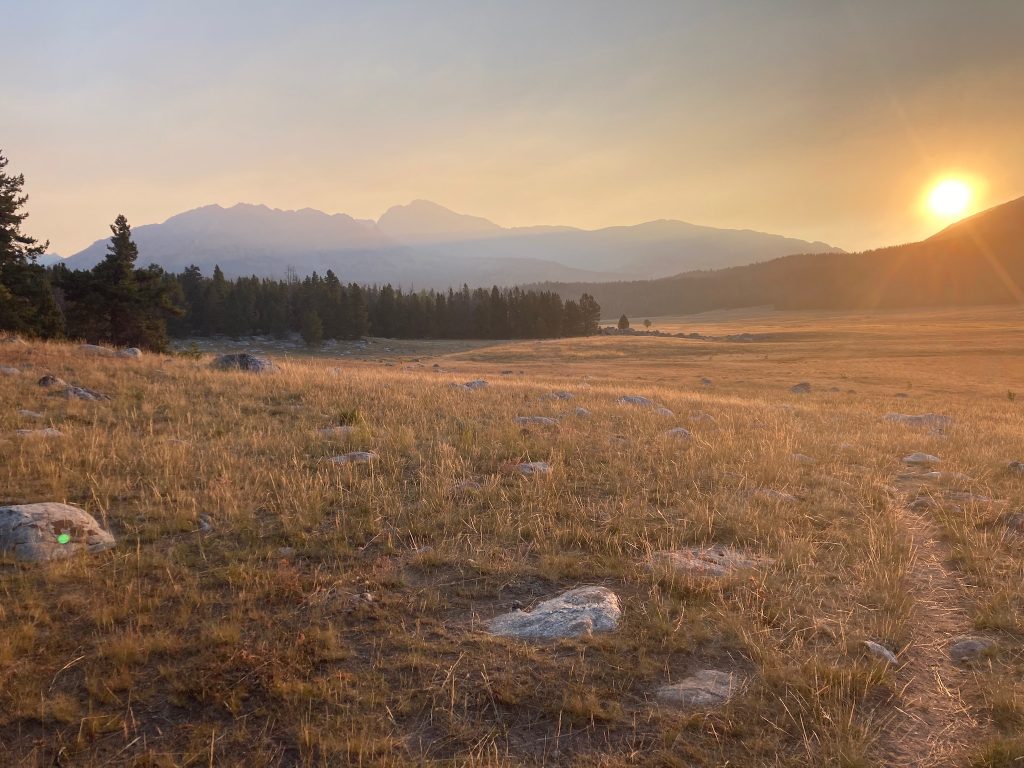 For all of the book’s strengths, it is not immune to decay and time. In the Winds, as in wilderness elsewhere, social media focuses visitors in a few places, while chronic under-funding of the Forest Service limits maintenance. A few routes are loved to death, and most fall into disuse and disrepair. Roads become trails, trails become game paths, and especially in the Winds, these are obliterated by deadfall. Reading between the lines, I suspected that this route would barely exist, but it would take me to some new terrain, and was not too long. 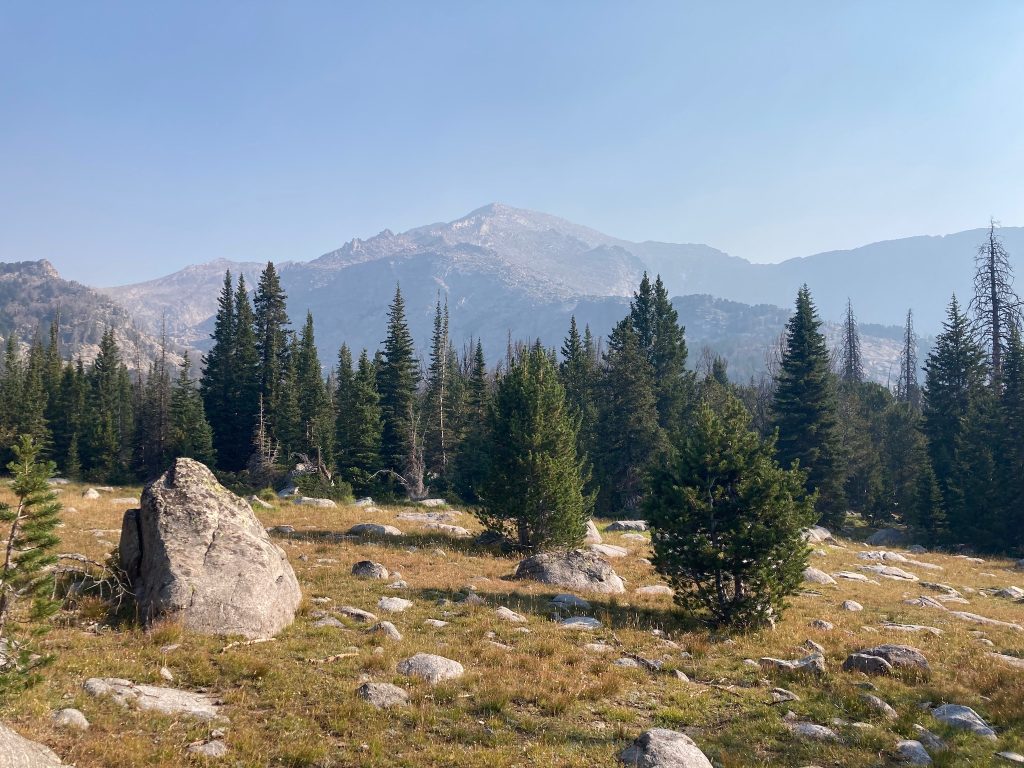 I hiked the half-mile of road to where more capable vehicles drive, then continued on a trail that still bore faint signs of having been a road in the distant past. This path crossed the faint Continental Divide Trail, then emerged into Sedgewick Meadow, from which Temple was faintly visible through the sunrise and smoke. I immediately lost the correct trail, finding another that crossed Dutch Joe Creek before petering out near a fence. I thrashed through the woods for awhile, then recrossed the creek and rejoined a faint trail with occasional small cairns. None of this is on any map, but there were horse prints from this summer, so it is still known and used by some local hunters or fishermen. 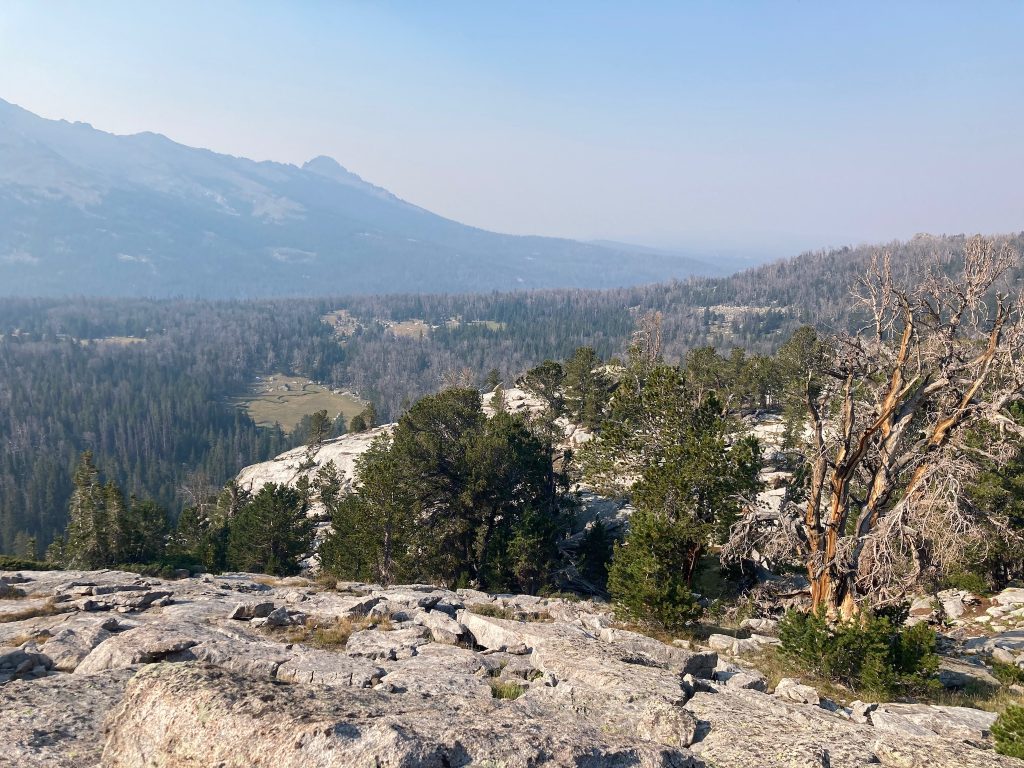 Looking back at the suck

The trail faded in a long meadow, but this was such easy ground that I did not mind. Unfortunately I did not find where it left the meadow’s upper end (nor would I on the return). The woods between this meadow and Temple’s granite southwest ridge were various forms of miserable, a mixture of windfall, large boulders, and thick brush. I soldiered on, occasionally finding well-developed game trails, and eventually reached the base of the ridge. Turiano describes the face as a boulder-field, and I was dreading a long talus slog, but the lower part had long stretches of slabs, while the upper part was mostly turf, and the talus was generally stable. 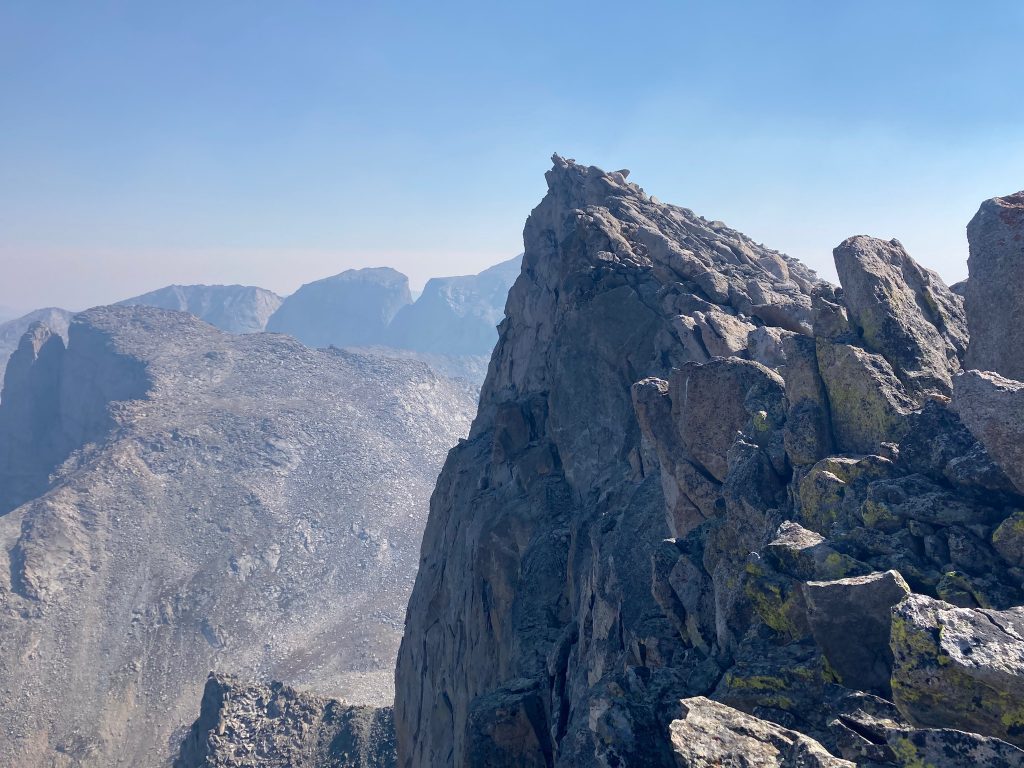 I reached the crest a bit west of the summit, giving me an impressive view of the prow and sheer north face. I worked my way through some tricky large talus to the summit, peered over the edge, read the “summit register” (Owen liked to carve his name in summit boulders), then had a snack and took in the smoky views. On a clear day one can supposedly see Gannett from Temple, but I could barely see farther than Lizard Head. Looking back southwest, I tried to pick out a better route for my return. 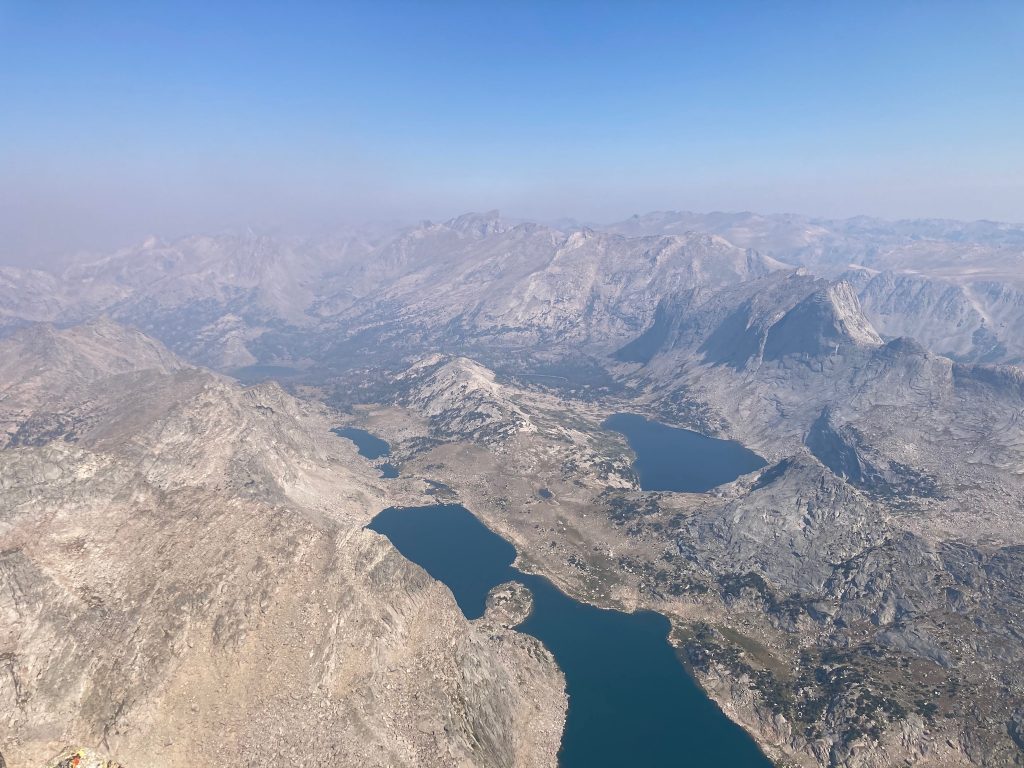 I retraced my route most of the way down the ridge, then continued farther left, following slabs to open forest and a meadow. I had found a cairn and faint trail on the way up, and I returned to that, then tried to guess where it might lead. I almost lost it right away in a meadow, but an little museum of old cans put me back on course. The trail seemed to head west and southwest, staying well above Dutch Joe Creek. It was cairned and easy to follow at first, and one deadfall had been sawn through in the not-too-distant past. Unfortunately, as seems common in the Winds, a windstorm had massacred quite a bit of the forest, and the trail became some combination of invisible and impossible to follow. I meandered roughly toward where I wanted to end up, following bits of game trail, stepping over some logs, balancing along others, picking my way through big talus, and crossing a small bog.

I finally emerged in the big meadow, and eventually picked up the trail again. It was easier to follow on the way back, eventually taking me to a hunters’ camp with a fire ring and suspended log for hanging game. The trail disappeared into Sedgewick Meadow after this, explaining how I lost it, but it was easy to take the correct line on the return. There was an old Toyota truck parked at the 4WD “trailhead,” but I neither saw nor heard its owner. What a contrast to the previous day’s crowds!

Looking back at the suck