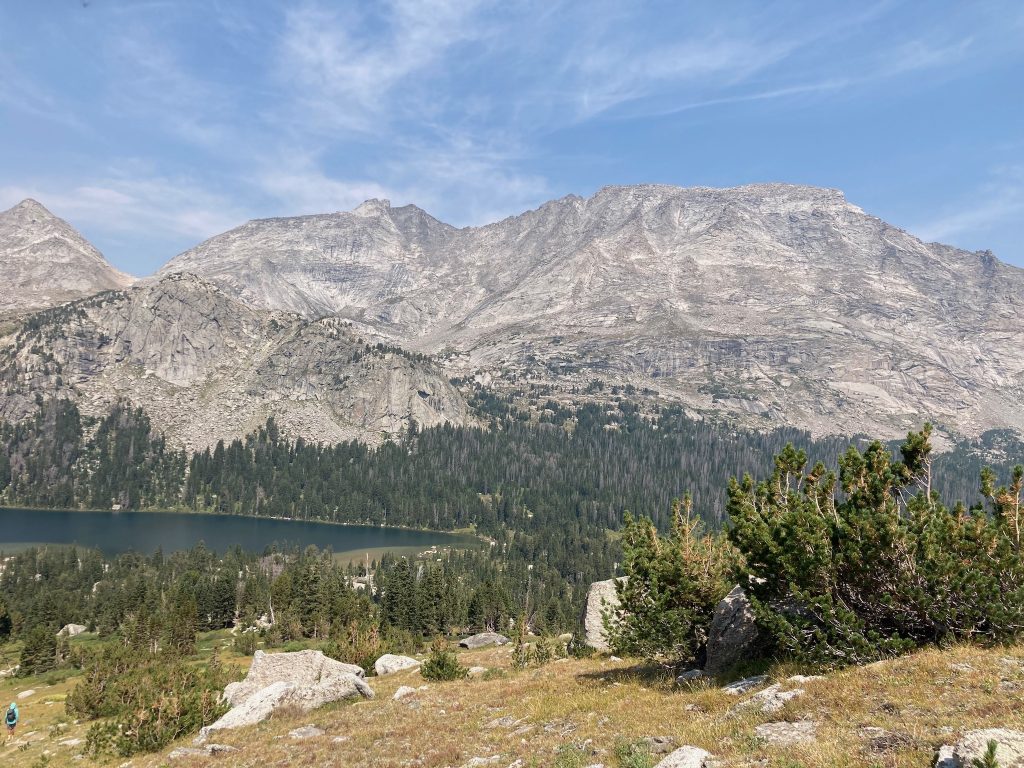 Lizard Head showing up and down

Tom Turiano’s Select Peaks of Greater Yellowstone is one of the best guidebooks I have read, one that I personally admire and aspire to emulate. It covers 107 peaks in ten ranges of the wild, high area of Wyoming, Montana, and Idaho surrounding Yellowstone. The peaks are chosen based on the author’s taste (Turiano seems to have climbed them all himself), giving a representative sample of the region and with difficulties ranging from short hikes to scary 5.6 choss. Rather than giving detailed route descriptions and maps, the book gives a brief description of one or a few routes for each peak, plus a list of the distance, technical difficulty, and time required. In the space thus saved, the book delves into the mountaineering and cultural history of each peak, making it not just useful as a reference, but worth reading cover-to-cover.

Unfortunately the book has long been out of print, and copies sell on Amazon for over $500 as of Spring 2022. (A lesson for authors: if you work with a publisher, make sure to retain the right to self-publish if they stop printing your book.) However someone was kind enough to put the peaks on Peakbagger, losing the lore but creating a worthy set of red dots to turn green. I have been slowly chipping away at this list as opportunities present themselves, and am currently almost a third of the way through. No one other than Turiano himself has completed it to my knowledge, but it seems like a worthy lifetime goal.

While the Winds are high and north enough to regularly receive late-summer snow, a heat wave had driven temperatures in Lander into the 90s for the first week of September, making it imperative to get high. Other than Sinks Canyon and Trail Lakes at the extreme south and north ends, eastern access to the Winds is blocked by the Wind River Indian Reservation, which charges around $100 for a “fishing” or “trespassing” license. They even have a graduated fee system for half-bloods and people married to full tribal members — go figure. That ruled out Musembeah Peak for me, but I still had a few Turiano peaks in the southern Winds accessed from the west, near the Big Sandy Opening. This is the trailhead for the Cirque of the Towers, which would doubtless be mobbed on a holiday weekend, but I was not planning to climb a popular route, and had not visited the area in a decade. 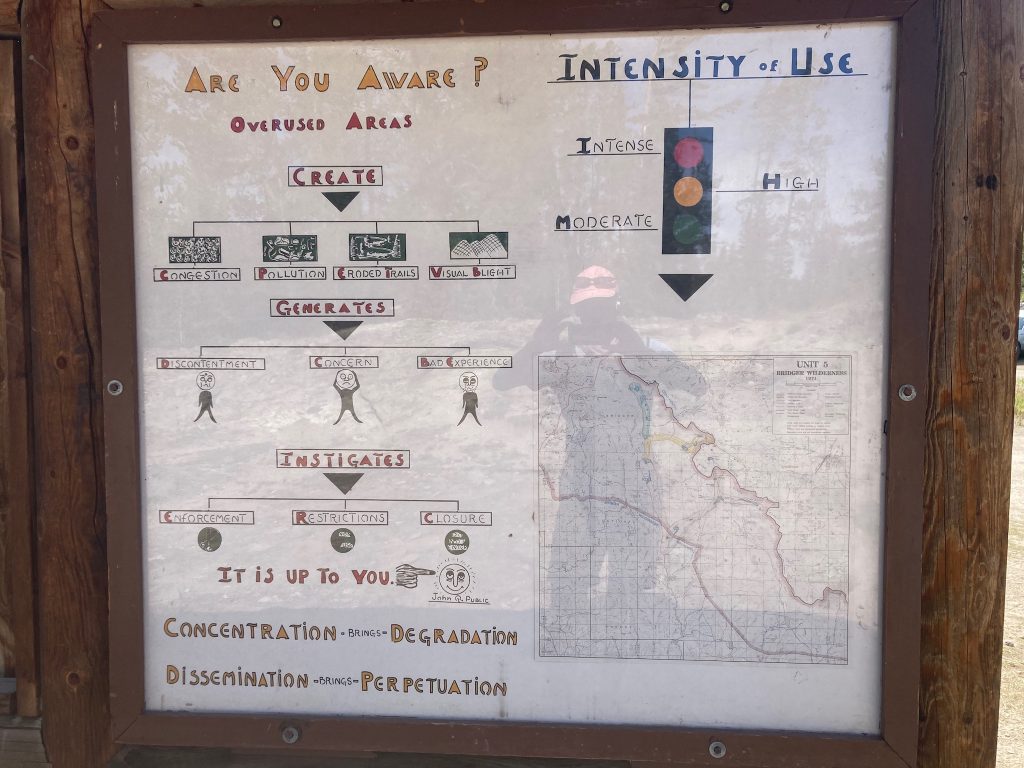 I drove down around the southern end of the range, then took the dirt Lander Cutoff road. It was somewhat washboarded, but still a good Wyoming dirt road, and my car and I were only slightly unhappy taking it at 30 MPH, a bearable speed with good listening material. The final road to Big Sandy was much worse, cutting my speed to 10-15 MPH and making me worry about my tires and feel sorry for my car. There’s a reason I don’t visit this area very often. Perhaps a half-mile from the trailhead, I saw fifty or more cars parked in a field that had become an improvised overflow lot, and more along the road in every conceivable spot. It being Sunday evening, I got a prime spot right next to the trailhead sign, but it was discouraging to be once again confronted with outrageous wilderness overcrowding. The Cirque is unfortunately within the holiday weekend radius of Boulder, and while Boulderites are legendary NIMBYs (it is effectively a “sundown town” for dirtbags like Yours Truly), they are equally YIOBYs (“Yes In Others’ Back Yards”).

Be that as it may… I got started around 6:45, hike-jogging up the trail in an overshirt. I saw a few others dressed as trail runners, but was slightly faster than them even in my current state. The trail climbs almost imperceptibly over seven miles to Big Sandy Lake, so I was able to jog quite a bit of the approach. From there it climbs steeply but inconsistently to Jackass Pass, the entrance to the Cirque. The trail situation is complicated, with the official one going high to the right, while a well-used climbers’ trail passes near the lakes on the way to another crossing of the saddle to the left. I was pleased to meet a steady stream of people leaving the area, driving home and leaving more space for me. They were a mix of climbers, fishermen, and backpackers with dogs and, in one case, an execrable Bluetooth speaker.

There were campers scattered around the Cirque, but they thinned out as I passed Lonesome Lake and headed for Texas Pass. After some willow-thrashing and boulder-hopping, I eventually found the well-beaten use trail — it turns out Texas Pass is part of “The Loop” up the Fremont Trail and back over Jackass Pass. Just below the pass, I left this trail to head up some slabs toward Camel’s Hump, a minor bump on Lizard Head’s west ridge. Turiano suggests this ridge as the best non-technical route to the summit, and rates it class 4. I found the crest itself time-consuming and tricky in spots, but perhaps my scrambling skills are rusty. I ended up mostly contouring below the ridge to the right, returning to the crest to get around a few difficulties and to climb the final headwall to the summit plateau.

Like many peaks in this part of the Winds, Lizard Head’s north and east sides have been chewed vertical by glaciers, while its summit remains an uncarved talus plateau. I hopped across this plateau to the highpoint, checked out the sheer faces on the other side, then sat for a bit to have a snack and check my email (most Winds summits have some service, as the range is narrow). Rather than returning the way I had come, I decided to try descending a mixture of gully, slabs, and grass from below the final headwall that I had seen did not cliff out. This proved much faster than the ascent route, seemed no harder than class 2-3, and deposited me at a seldom-visited lake where I refilled my water bladder.

From the lake, I descended toward the eastern side of Lonesome Lake, eventually picking up a faint use trail and then the main trail. From there it was a steady hike and jog in the direction of traffic back to the car. I had briefly entertained the thought of traversing Mitchell, Dog Tooth, and Big Sandy Peaks to connect the top of Jackass Pass to Big Sandy Lake. This would add some time but not much distance, and I had plenty of food and daylight, but I am wary of over-stressing my body after a month and a half of almost no hiking or running. I passed the same mix of people on the way out that I had on the way in, mostly ignoring them, but stopping to talk with a mother and son hiking in their camp shoes while carrying their hiking boots, which had cruelly abused their feet. The parking lot was slightly more than half full as I made my post-hike meal, then drove a short distance back down the road to the next trailhead. My body seems to be handling the return to hiking and even jogging better than I expected; I hope that continues.

Lots of flowers toward Texas Pass

Cirque from other side

Back of Pingora and Wolfs Head