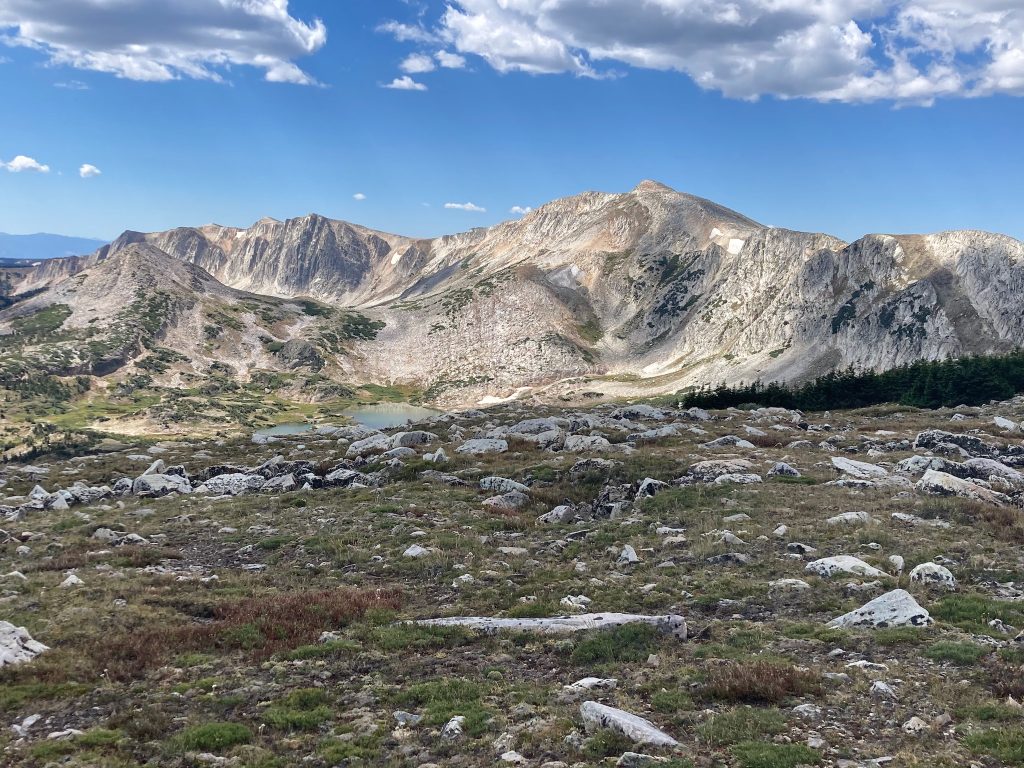 [While I intend to write about the rest of Europe, I’m currently back in the States and hiking some easy peaks, which will be interspersed with the tail end of the bike tour.]

Medicine Bow Mountain is the highpoint of the small Snowy Range in southern Wyoming, reaching just over 12,000 feet. Even without snow, the mountains have a snowy appearance from a distance thanks to their large fields of quartzite, and they are even home to a few small glacial remnants. I was planning to climb Elk, another prominent mountain south of I-80, but Ted informed me that Medicine Bow was better, and Elk had private property issues. After attending a presentation in Boulder, I drove north and west until I was too tired, pulling over at a rest area to sleep before finishing the drive in the morning. From Laramie, I followed the Snowy Range Road as it climbed to over 10,000 feet, then took a short dirt side-road to the popular Lewis Lake trailhead. Medicine Bow by itself would be a ridiculously short hike from there, so I decided to add neighboring Sugarloaf and Browns to make a slightly longer loop. 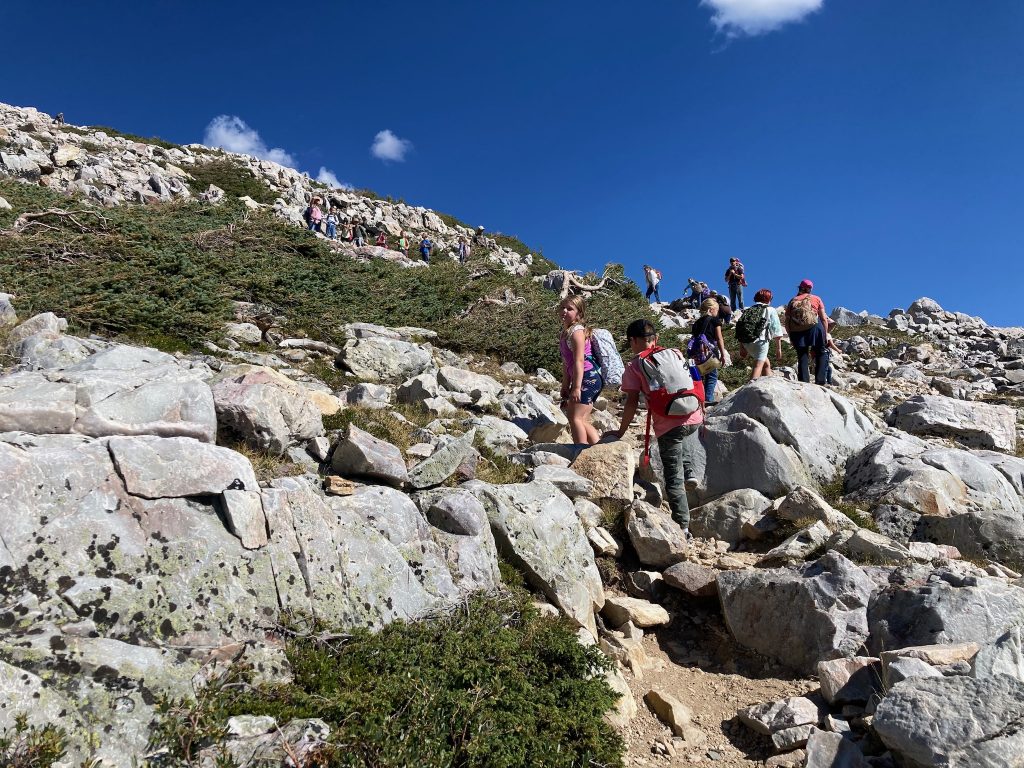 I started off on the trail along the lake, then left it where I it looked like I had a direct line up Sugarloaf. The climb was an easy class 2 mixture of turf and talus, and I was soon on the summit, looking across at a crowd of people slowly making their way up the trail to Medicine Bow. The descent to the saddle was somewhat more annoying unstable talus, but not too much trouble, and once I picked up the well-used trail I began to pass the group. They turned out to be the students from two small towns’ elementary schools, with some kids as young as five making their way up the boulder-y trail toward the summit. Having started hiking at a young age myself, I was cheered to see them making their way upward with very little whining. 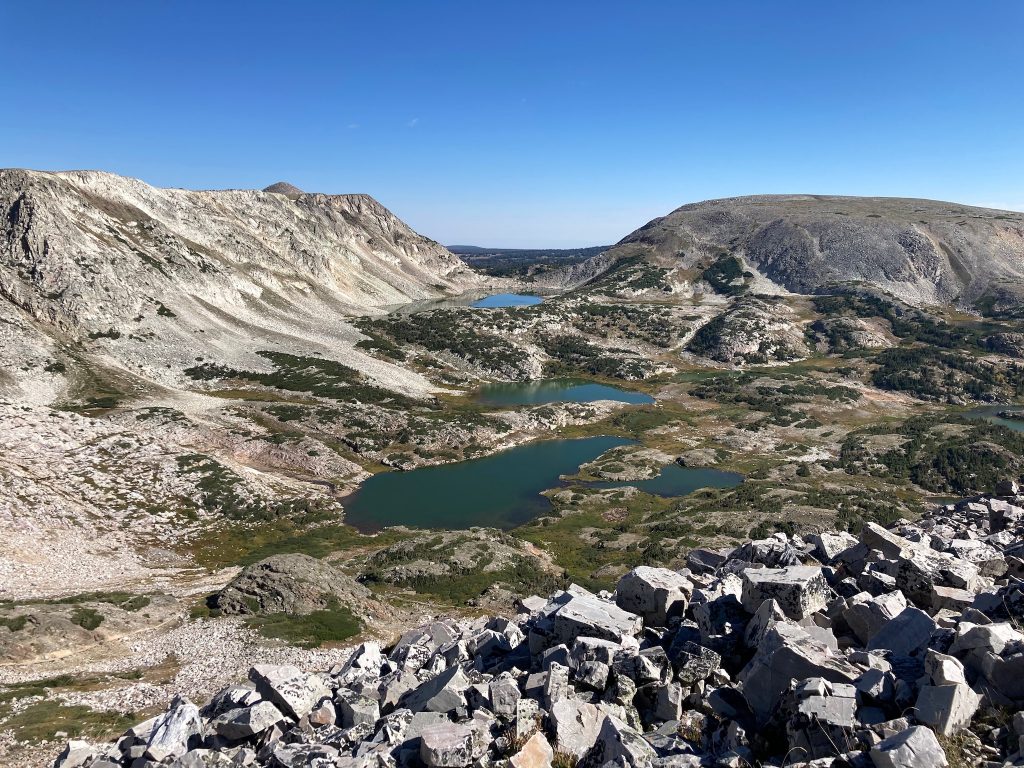 The trail more or less disappears on the summit plateau, where the highpoint is a short boulder-hop to the south. I stopped near the benchmark to have a snack, then took off north across the plateau on my planned loop. This was easy but not particularly fast going, grass mixed with boulders and scrub brush. The east side is often sheer, but as I had suspected, the ridge leading down to the saddle with Browns was easy, with perhaps a trace of a trail. The hike up Browns was similar. 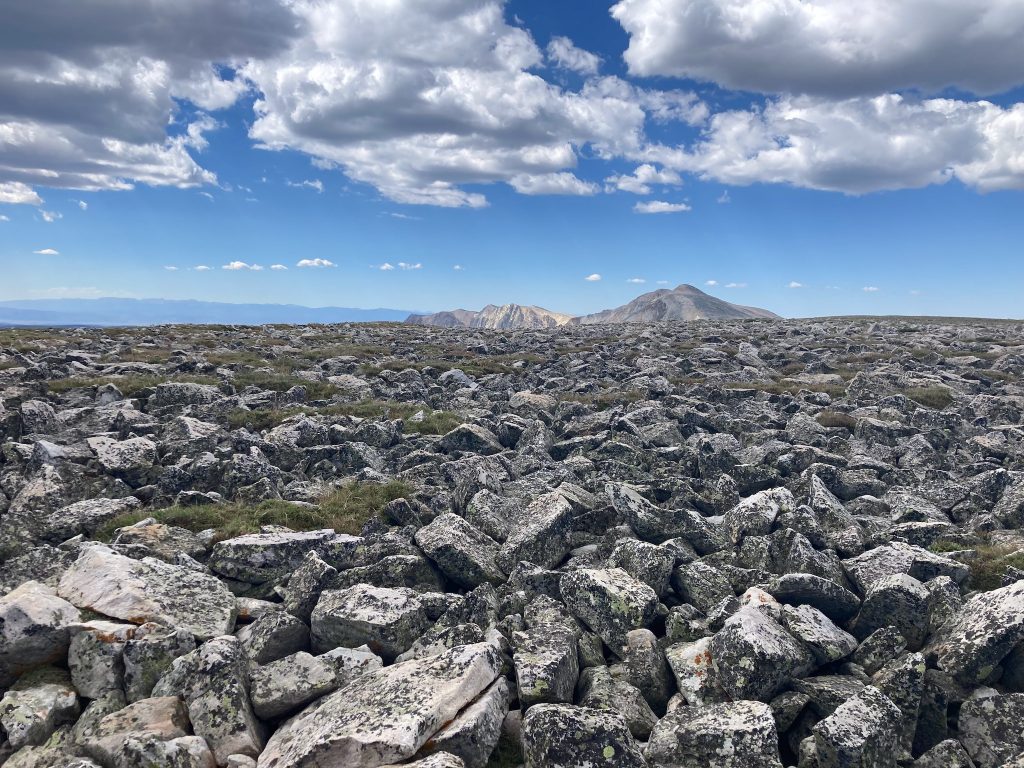 Browns’ summit is an expansive plateau made up of rough grass and rock, very slow to traverse, with three potential highpoints. I walked over the one that looked highest, tagged the spot that Peakbagger claims is the summit, and ignored a pile of rocks to the northeast that was another contender; I was out of patience with the terrain. I took a direct line south-southeast from the “summit,” descending a faint ridge to pick up the trail a short walk from the parking lot. Exercise achieved, I got back in the car and continued my drive north.