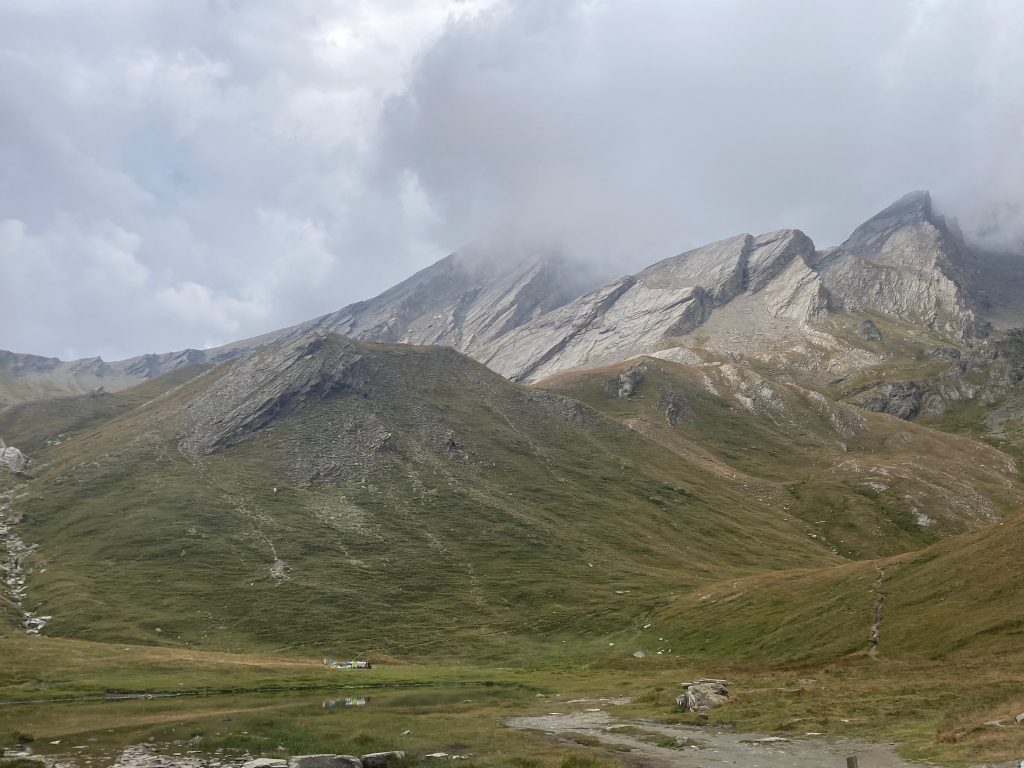 My train-warp to Turin saved me from either 2-3 days of flat riding in the heat, or another trip through Switzerland, landing me back near the French-Italian Alps from whence I came. However, it also left me a reasonable distance away, and not far above sea level, so I had some flat rolling to do, then over 8,000 feet to climb to cross the Col Agnel back into France. After the Stelvio and Iseran, the Agnel is the third highest paved pass in the Alps, and one of only three over 9,000 feet. Despite being near Briançon and on the French border, the Agnel has only been used in two Tours de France, in 2008 and 2011, and two Tours of Italy, in 2007 and 2016.

From downtown Turin, I navigated my way out of the city with occasional stops to make sure I was on the right road, and constant uncertainty about where I should ride. The major city streets have a central, multi-lane part with fast traffic, one-lane “frontage roads” on either side to park and access businesses, and multiple sidewalks or bike paths. I tried to follow the occasional local, but would lose him and/or get confused at the roundabouts, which threw the division of traffic into confusion. 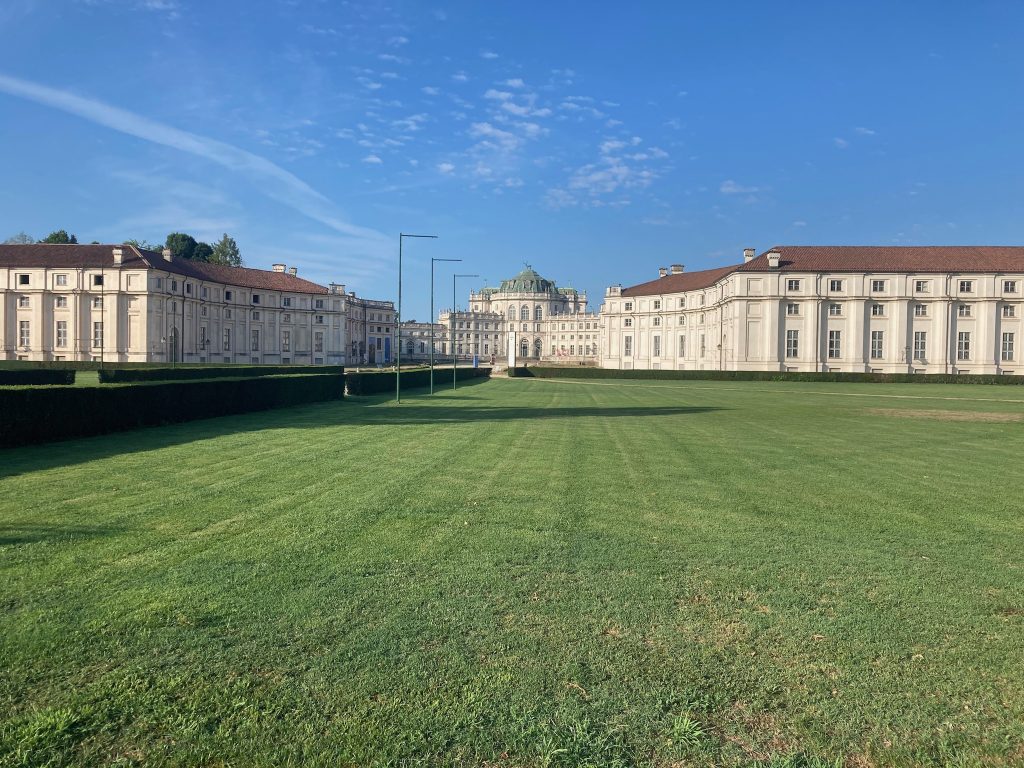 The city finally trailed off, and I was riding through farmland and small villages in the increasing heat. I headed generally southwest then south, with a deviation around a palace at Stupinigi, and sections of well-paved separate bike path around Vigone. I stopped at the base of the mountains in Saluzzo to refill water and eat lunch, then began the gentle climb up the Varaita River valley toward the pass. The climb followed the gentle grade of the river to Casteldelfino as the mountains rose above it to either side, then somewhat more steeply up a side-stream to the lake and the tourist town of Pontechianale. 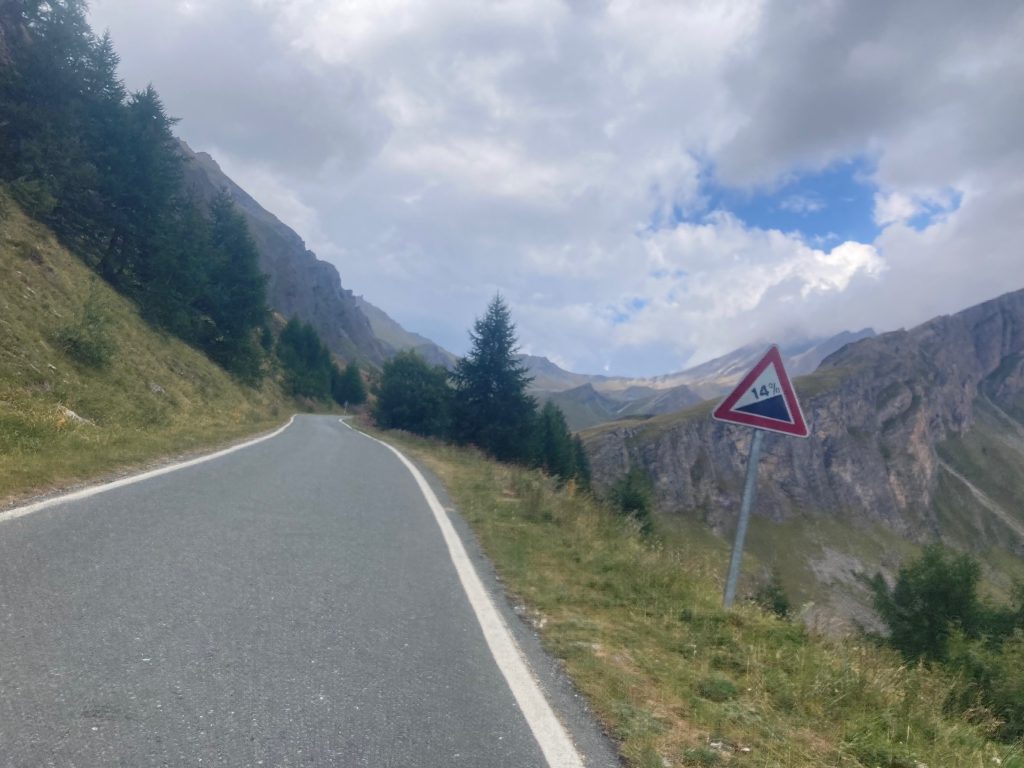 Slightly above town the climbing begins in earnest, with switchback and grades up to 10%. The road climbs above treeline into a broad valley full of rocky uplifts, then meanders its way up the right side before traversing back to a saddle. The forecast called for evening rain on the Italian side, so I was highly motivated to get to France. Riding into the evening, I saw several other cyclists headed in both directions. I finally reached the pass, pausing just long enough to take a few photos and put on some warmer clothes. It was not quite raining, but I had to descend at least 3000 feet before I was low enough to sleep comfortably with my meager gear. 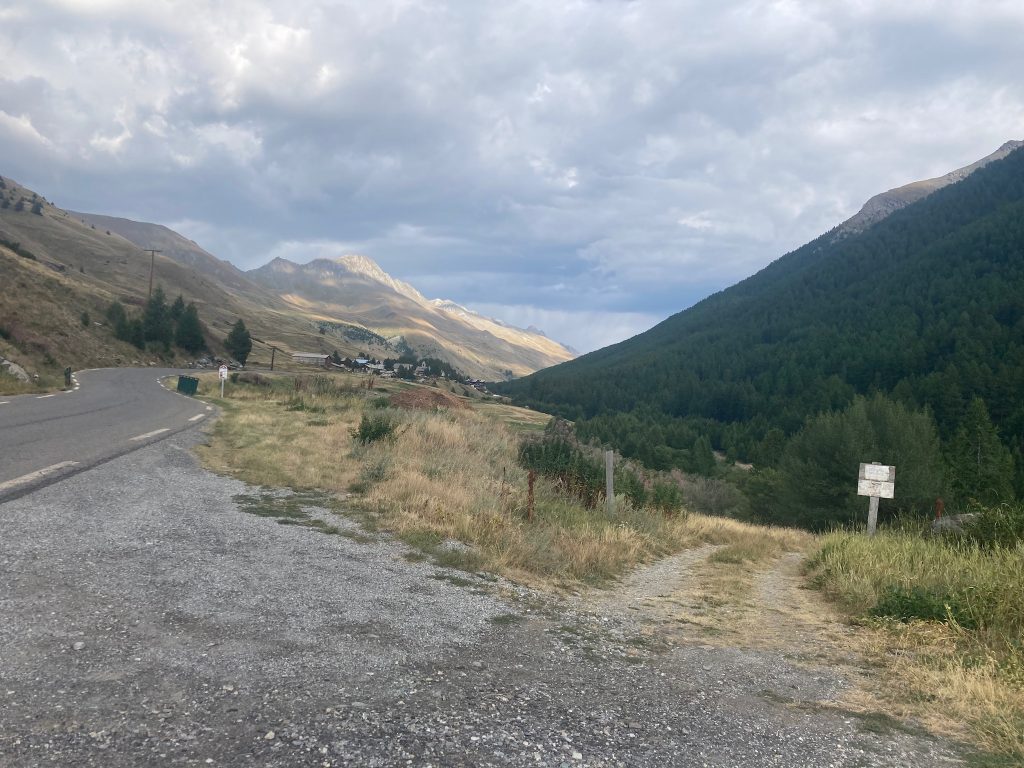 The descent was a bit sketchy with my worn-out brakes, but the French road was more sane than the Italian one, and I managed not to crash into anything. Finally, shortly above a small village, I found a rough and unused-looking side-road ending at some beehives, and pulled a polite distance off the highway to camp. I found out in the morning that the road was in fact used, but the guy who bounced his van down to the beehives did not seem annoyed or angry, pausing while I quickly moved my things out of the road before continuing by. Liberté, egalité, fraternité!

This is gonna hurt

Made it to sun