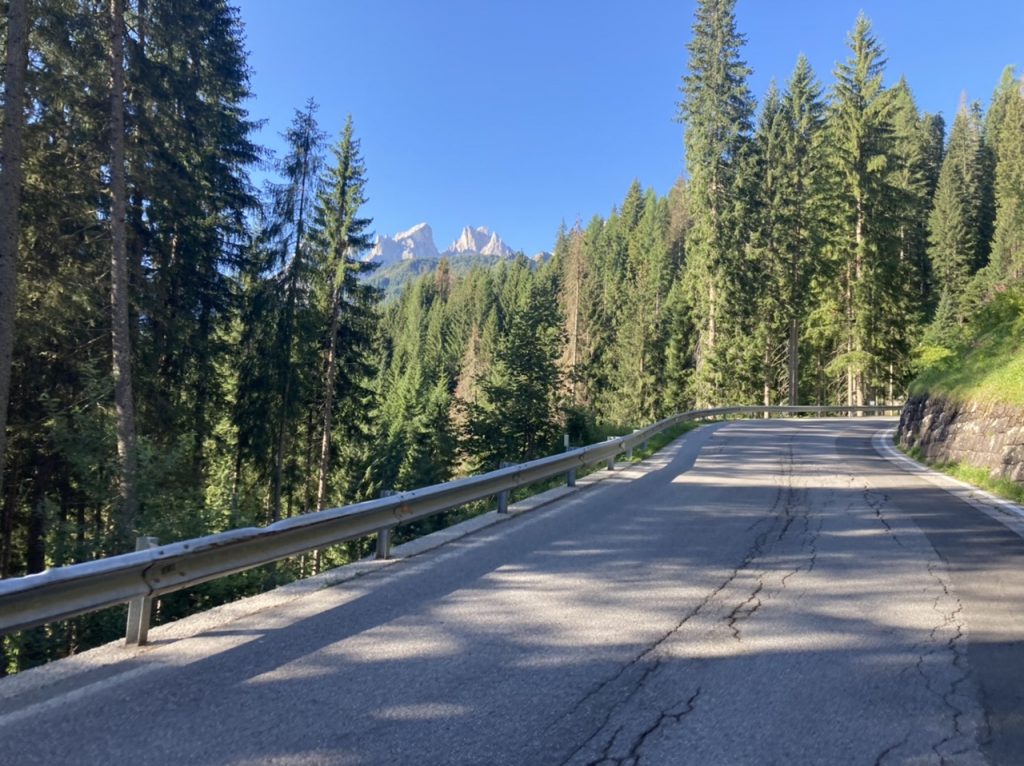 Completely by accident, my exit from the Dolomites took me past some peaks I climbed last time, Cimon della Palla and Cima della Vezzana. However, because I was traveling by car and navigating with my phone, I don’t remember how I reached the Passo Rolle at their base. This time, on a bike, I understand the layout much better, even if I can’t climb them.

From above Moena, I rode up the gentle Passo San Pellegrino, where I stopped at a park to get water and look at a map of the nearby WWI front. The other side of the pass is much steeper and twistier, but I descended only partway before turning to climb the Passo Valle. This was a beautiful and little-used route, steeper on my way up, with distant views of Dolomitic peaks. There is little reason for this pass to exist, but thankfully while Italy may be a basket case in most ways, its Roman impulse to create infrastructure remains strong. Build it once, build it to last, and even occasional use will make it worthwhile in time.

From there I descended to the more popular Passo Rolle road, which was a gentler climb with much more traffic. I did not realize until I was almost at the summit that I had spent a couple days climbing there, including failing to find a supposed 5.4 route on the Cimon della Palla. The other side was much bigger, dropping through the tourist town of Siror to the valley below. Rather than going all the way down to Lago di Corlo on the main road, I took the big but not especially high Passo Brocon.

There was a lot of recent logging along this road, but very little traffic, as it only serves a small ski area and connects some small towns. I stopped for groceries in one of these, then found a place with a picnic table to camp and, once again, get rained on.