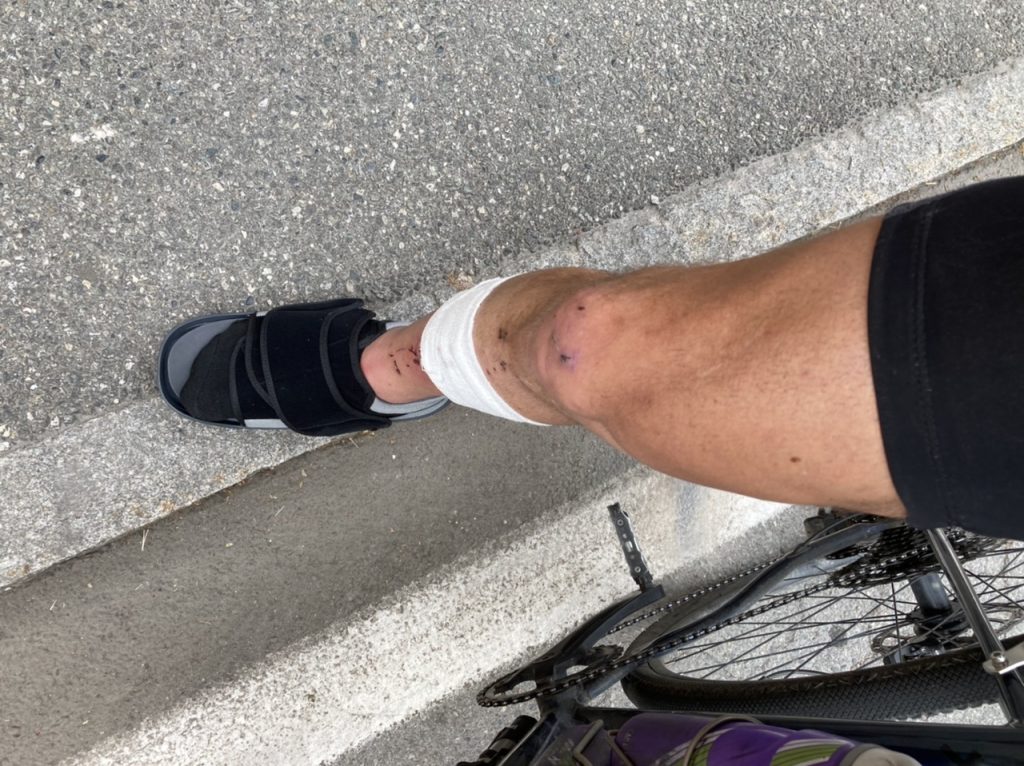 So, what do you do in the Alps with a broken toe, a stitched-up shin, and a movable ticket? Most people would fly home as soon as possible and convalesce, but I am not “most people.” Since I brought my inline wheelchair (i.e. bike), I decided to at least explore the paved portion of the Alps, which is still high and expansive.

Things were too swollen, bloody, and painful at first, so I spent four nights recovering in a hotel in Aosta. The orderly who discharged me from the hospital chose it as basically the closest place that was fairly cheap and had space at 8:00 PM on a Saturday. It turned out better than I had any right to expect, costing about $50/night for a clean room with a large bed. The owner was some variety of landed gentry who had traveled extensively in the western United States, so we got along well.

I went from sitting in bed with my leg elevated, to sitting next to Roman walls with my leg elevated. Walking was a painful chore, but I could get around town on my wheelchair well enough to buy food and sightsee a bit. Aosta is an old place, once named Augusta Praetoria Salassorum because Emperor Augustus killed and enslaved the Salassi, its former inhabitants. The city was strategically located at the junction of Grand and Petit Saint Bernard passes, two ancient routes through the Alps. The modern version has grown around and through the original Roman square fort, giving it the wonderful mish-mash character of places continuously inhabited through ages of civilization. The buildings range from stone to concrete and glass, the streets from narrow cobbles to striped asphalt.

After four days I was getting bored, fat, and poor, so it was time to wheel farther afield. I chose to do an out-and-back up the Valgrisenche, one of several valleys climbing over 1000 meters above the Dora Baltea. I had visited its neighbor, the Valsavaranche, to climb Gran Paradiso on my previous trip. I was pathetically slow on the climb, only being able to partially use my right leg, but I figured out how to pedal comfortably, and reached the end of the valley at the far end of Lake Beauregard. I waited out some afternoon showers under an eave and in a bus shelter on the way down, then stealth camped on a tunnel bypass. Camping is “forbidden” basically everywhere in Europe, but the word means different things in different places. Suspecting that it meant precisely its dictionary definition in Switzerland – scan your passport, fill out form 1035D, pay CHF 200 – I was determined to save money where I could. This was better than my subsequent Swiss campgrounds, not flat, but quiet with cell service and a view of a crumbling medieval tower.

The next morning I descended back through Aosta, bought road food, then made the 6500-foot climb up the Grand Saint Bernard. With only one stretch of 10% grade, it was mercifully gentler than the Iseran. I was in no condition to pass anyone, or to hang with the cyclists who passed me, but I ground it out, stopping for a late lunch below the statue of Saint Bernard. A fifty-yard walk to look at the statue convinced me that I would not be hiking for awhile.

The descent to Martigny on the Swiss side was similarly long and gradual. There was plenty of daylight left, but I had had enough, so I found the nearest campground. It met my expectations: immaculate, full of polite people, and ridiculously expensive. Most were long-term campers in trailers with pop-out tents (a smart Euro setup), but they put me next to a German bike tourist. Unlike those I had met in South America, he was only out for a couple of weeks. He was friendly, though, and seemed interested in my travels.

The next day’s ride through the Rhône Valley was much less pleasant. The secondary road was more of a highway, and while long stretches had a striped bike lane, there were also tunnels. I am not sure what bikes are supposed to do: take a road around where possible, ride on the emergency sidewalk, or just ride through. I got honked at for doing the last once, so that was probably wrong. The valley is almost continuously developed, and traps heat and smog, giving a Los Angeles feel. I suppose the views are better, but I was glad to escape, climbing a couple thousand feet out the east end toward the Grimsel, Furka, and Neufenen Passes. Stopping in the tourist town of Fiesch set me up nicely to cross the Neufenen the next day.

Swiss side of Saint Bernard