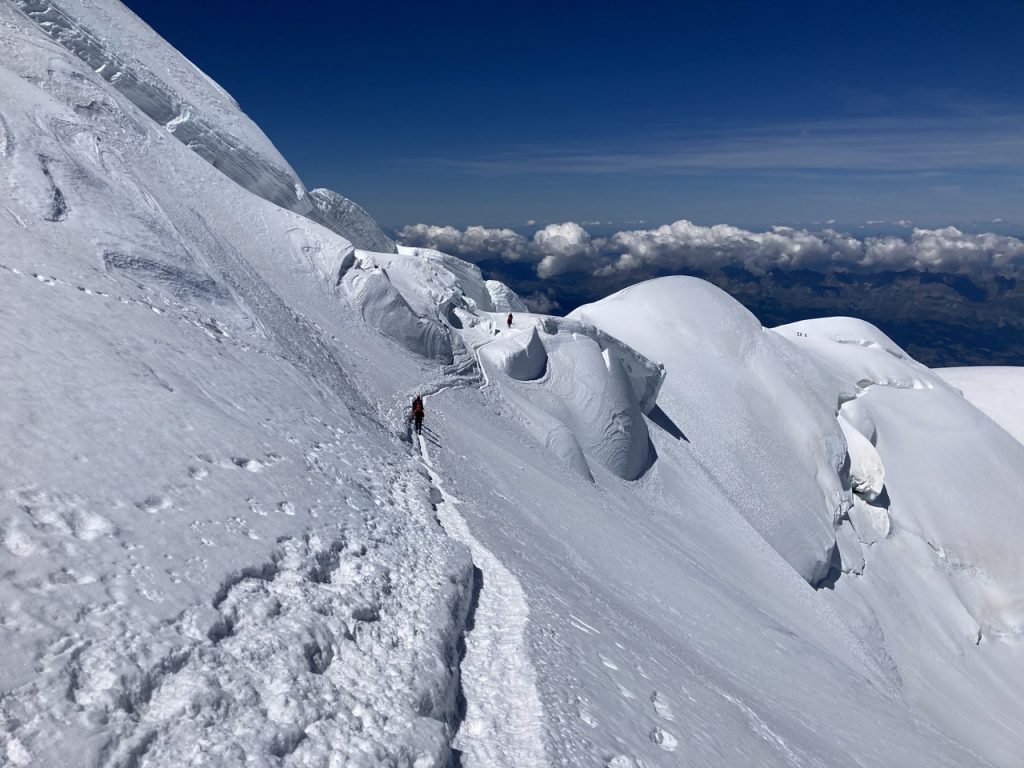 (This is out of order and has been marooned by subsequent events, but I have free time, and it might be of some use to someone.)

Kevin and I finished our day of “high-altitude cragging with a view” with a descent to the large and popular Cosmiques hut, a short walk from the Aiguille du Midi tram/teleporter. This was my second experience after Rainier with the glacier suicide pact, i.e. walking on a glacier tied to one other person, and I thought no more highly of its safety benefits. My skill at neither pulling my partner nor tripping him with coils of loose rope is limited, but we made it down without incident.

As the base camp for both technical Aiguille climbs and the “cheater route” on Mont Blanc, the Cosmiques was predictably crowded. After changing into giant floppy slippers that were meant to either go over our boots, polish the floors, or prevent our escape, we went over to the desk to check in. The guy at the desk was clearly stressed around dinner-time, and in classic French fashion was doing his job while completely unashamedly taking that out on the closest target. I could partly gauge his level of frustration by how aggressively he switched to English when I tried to communicate in French. Now was time to eat, and we were late, so we should somehow find places to sit. He also needed to know whether we wanted the early or late breakfast, and the fact that we wanted to eat at different times finally drove him over the edge. “Just go, and take care of the rest later.”

We squeezed in next to an Austrian (or maybe German?) medical student and his friend toward the end of the soup and cheese course, securing some of each. They were both tasty but salty, making me worry about how much it would cost to drink enough water. I finally sucked it up and went over to the kitchen, and was surprised to find that the woman there politely gave her two carafes and some glasses free of charge. (She later filled my water bladder with the same politeness, perhaps pitying my fear.) The main course was chicken in some sauce on rice, also delicious, and a table-mate managed to secure a second platter. After dessert, we watched the sunset then retreated to our communal bunk-shelves for mediocre interrupted sleep.

I woke a bit before 4:00, and was in line outside the locked dining room when it opened precisely on time, lights off and each table lit with a candle. We again had assigned seats, and as a solo party I got a whole carafe of coffee and slab of butter for myself. I took my time with this pleasant breakfast, which also included granola and milk, then followed the headlamp train up the Trois Monts route.

Bypassing Mont Blanc du Tacul, I met an Englishman descending alone from Mont Maudit, then scrambled that peak along its northwest ridge, an awkward mix of choss and icy snow. From the summit, I descended the southwest face to the bootpack and resumed the plod. By this time I was regularly passing parties in both directions. This stretch felt longer than I remembered from my descent four years ago, but I eventually ground out the last 1500 feet to the summit of the Alps.

I watched people celebrate for a minute or two – circus though it may be, it is a legitimate accomplishment – then took off for Mont Blanc de Courmayeur. I was on a quest to tag that and one of the UIAA’s numerous stupid summits on the south side of Mont Blanc, Picco Luigi Amedeo. These points lie along three ridges, the Peuterey, Brouillard and Gouter/Bionassay, and I had thought long and hard about how to reach them all efficiently. The crux of the Brouillard Ridge is below Amedeo, so it is best done from above. The upper Peuterey is also easier, but the Aiguille de Bionassay is a short side-trip on the way down to the Gonella Hut, where there is food and shelter. I was also low on daytime food after so many days up high, so I chose to descend that way, return to town, and clean up the final points from the south.

Enough people either make side trips to MBDC or cross it finishing the Brouillard and Peuterey Ridges for there to be a track that far, and there were even old bootprints on the upper Brouillard. I had hoped this short detour losing 1000 feet would go quickly, but it was painfully loose, probably taking similar time going down and up. Frustrated with my project’s arbitrary demands, I was happy to return to Mont Blanc‘s summit, where the party had picked up. I traded photos with some Brits, then headed down the even more well-beaten path down the Gouter Ridge.

Shortly after a pause for a snack at the Vallot hut and research station, I left the main trail to tag the Dome de Gouter, then continued down a much fainter trail to the Piton des Italiens. The Aiguille de Bionassay was only a short side-trip from there, but surprisingly stressful and tiring. The final climb was a snow arete like the summit of Eldorado in the Cascades, but many times longer and more intimidating. This late in the day, the south side was collapsing slush, while the north remained hard snice. I made cautious progress with a mix of balance-beaming and walking to one side with my axe planted on the other, then reversed the process back to the Piton.

I had spoken to a group who had climbed the normal Italian route that morning, and saw a fresh track on the glacier below, but the snow was soft and the glacier badly crevassed, so it seemed wiser to take the rock route down to the Gonella hut via the Aiguilles Grises. This was not particularly difficult, with fixed cables on the crux pitches, but still loose and time-consuming. At the hut, I briefly considered continuing to town, but wisely chose to stay the night. It was expensive (supplies only by helicopter) and there were no seconds, but at least the hut-keepers were friendly, as were some well-traveled Swiss heading up the next day.

Without a reservation, I ended up in the older, run-down part of the shelter, but slept well enough. I woke late had a meager breakfast, then followed some cables and a winding path down to the Miage Glacier. Once off the snow and ice, this was a long, tiresome debris slog, trying to pick out cairns and bits of trail in ever-changing terrain. I finally saw some parties descending off the right lateral moraine, and rejoined trails and civilization there. The long, hot walk back down the Val Veny and up to Planpincieux gave me time to readjust to civilization. My bike was where I had left it at the campground, so after availing myself of the showers, I packed up and coasted into town to resupply, then slowly pedaled back up the Val Veny to hang out at the lovely campground before finding a bivouac near the Monzino hut trailhead.

Uh, what am I doing?

Glacier across from Gonella hut