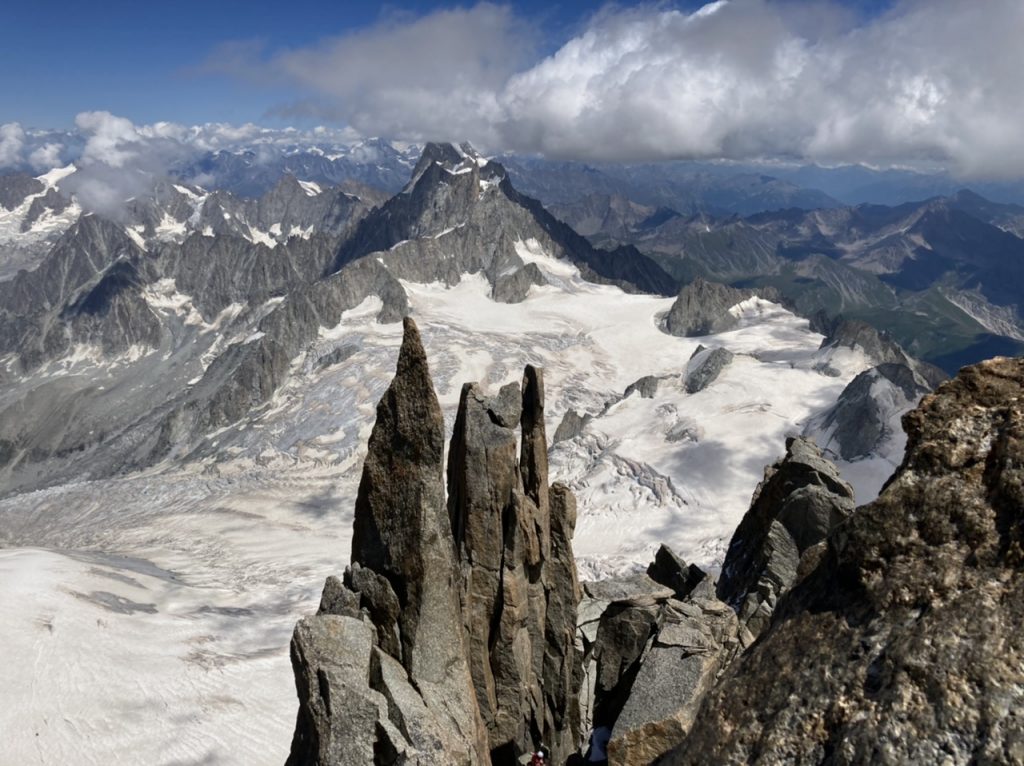 Sharper needles with Jorasses behind

The Arete du Diable is the ESE ridge of Mont Blanc du Tacul, with five short spires rising over 4000 meters. They are far more technical than any other peaks on the UIAA list of 82 4000m peaks, and none has anywhere close to the 100m or 300ft of prominence that define a “peak” in the Lower 48 and elsewhere. They are a major reason that, when I first thought about the project of climbing the Alps’ 4000 meter peaks in 2020, I only planned to climb the ones with sufficient prominence. Other minor Mont Blanc area summits have further convinced me that I would have lost little experience and had more fun climbing the prominent list, and that the French were over represented on the UIAA committee.

But here I am. Several people I know are in the Mont Blanc region, and I managed to convince Kyle to take a day out of his vacation to rope up for these peaks. I had thought of scrambling them in rock shoes, but in retrospect that would not have worked. I felt comfortable climbing all the pitches roped, but the traverse feels unidirectional, and I do not think I could have up- or down-climbed all of the rappels, some of which were partly free-hanging.

It was an amazing day of alpine climbing outside my normal range, and good to meet in person someone I had only known online, but it felt like an interlude from my main project over here. Fortunately, once I am done with the Mont Blanc region, none of the UIAA minor peaks will be more than minor detours.

Sharper needles with Jorasses behind

Topping out on Tacul

This entry was posted in Climbing, Europe. Bookmark the permalink.