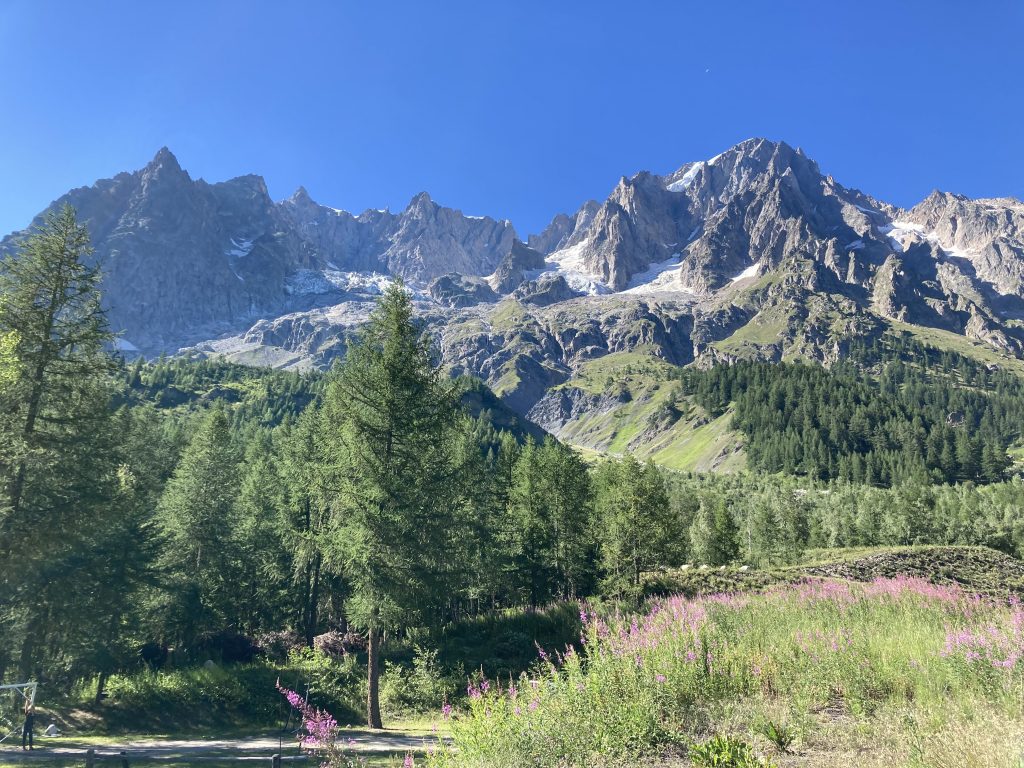 (Since I have trapped myself in “hurry up and wait” hell, you get more words.)

The stretch from the Grandes Jorasses to the Dent du Géant is one of the long, hard parts of this project. I had originally planned to do it in the normal, downhill direction from the Torino hut, then hoped to do so from the Boccalatte hut. The latter being closed added only a couple of hours which, with a 3:30 AM start, worked out well.

The first part, through Pointe Whymper, was familiar and, with clear skies, I could easily follow the bootpack on the normal route. The descent off Whymper was uber-choss, then things got interesting. Pointe Elena is a knife-edge on both sides, and Marguerite is also challenging. I passed a soloist going the other direction, moving incredibly fast in retrospect, and a Swiss pair.

The no-peak-points stretch between Marguerite and the Dome de Rochefort was surprisingly hard and cost me a lot of time. The descent toward Pointe Young follows a choss-gully to the left before regaining the ridge. The route from Young to the Canzio bivouac is not obvious from this direction, and I went too low to the right. I got back on track with some shenanigans climbing the seam between glacier and rock, then climbed out of the gap past several rappelling parties.

The pain continued on the way to the Dome, which is not at all dome-shaped, with one overhanging gap requiring a downclimb left followed by a strenuous corner back to the ridge. The Aiguille de Rochefort, on the other hand, was easy, although the descent involved more annoying choss. Most of the rock less steep than the central Jorasses and the Dent du Géant seems to be garbage, probably thanks to receding glaciers and unusual warmth.

I finally reached the Dent du Géant, and was surprised to find several parties still going up and down. I learned that the climb receives afternoon sun, and people prefer to climb it warm. It is the peak of Euro-sketch, with a series of fixed ropes leading around the corner to the left, and a famous fat one on the slab to the summit. I doubt I could have soloed it even in its original, unpolished state, and I didn’t even try, pulling on everything that I could. I got stuck in a bottleneck near the top, with one party climbing through another that was stopped for no apparent reason. They were all Italian, though one woman, Sara, was uncharacteristically friendly and English-speaking. She seemed impressed that I was “free soloing” the route, though I’m not sure I would describe hauling on a boat rope that way.

I tagged the summit quickly, then climbed back through the jumble to get down. Unlike rock, descending a fixed rope is always easier, though I made a bit a mess of it and ripped one of the baffles of my down jacket. I still beat the roped parties to the base, and cruised the rubble down to the glacier, where I followed a well-worn track to the hut. I was worn down, but glad to be done with one of the project’s most uncertain days.