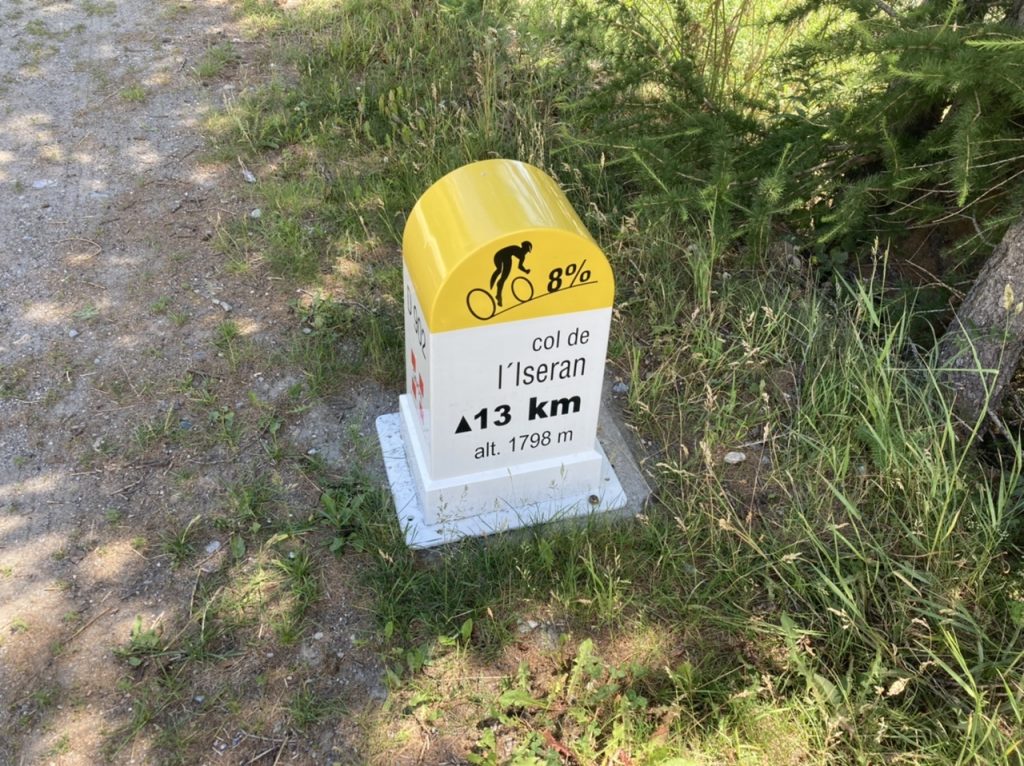 This project starts and ends with two easy outliers: the Barre des Écrins and Piz Bernina. So after my warmup peak, I had a 100+-mile commute to reach the Mont Blanc summit mother lode. Choosing the best route is incredibly hard, since there are many roads linking the two places. Existing mapping programs are useless: the fastest car route follows controlled-access highways, which are closed to bikes and expensive. So-called “bike” routes from Google and maps.me are arbitrary, leading through towns and sometimes even on trails. The information is out there to write a program computing the minimum-wattage paved legal route, but no one has written it yet. I found it easier to just eyeball something and go for it.

The flattest route goes down to Turin, then up the Aosta Valley, but it is about 50 miles longer than going through the mountains, and hot and boring. The mountain route I chose goes over the Col de l’Iseran, famous as one of the biggest Hors Categorie climbs on the Tour de France. (To be fair, I think I went up the short side, only climbing about 4000 feet from Lanslevillard.) On either side of that, I had to climb the big side of the Col du Mont Cenis from Susa (~5000 feet), and the small side of the Col du Petit Saint Bernard.

I started as early as I could force myself from Oulx, my dread increasing as I coasted down the Dora Riparia, losing precious elevation. I saw only a few other cyclists on the long climb, a couple of commuters (!)on their way down, an older guy on a e-bike who drafted me for awhile, and a loaded tourist near the top. I climbed with the temperatures, so it remained warm but not unpleasant the whole way.

At the top, I stopped for a sad French ham sandwich (a bit of thin ham on a half baguette) and a tasty pain chcocolat. I continued past a long lake and some weird monuments including some elephants (did Hannibal pass this way?), then bombed the other, steeper side through a ski area. I stopped at a mini-mart to buy as much of the worst food as I could carry in my pockets, then set out up the Iseran.

The pass is long, but surprisingly steady and gentle. According to the signs for cyclists every kilometer, only one stretch reaches 10% grade, with most averaging 8% or less. I saw a few more cyclists on the lower part, but the crowds really only started at Bonneval. I must have seen around 100 cyclists on this stretch, alone and in pairs, and enjoyed the communal suffering despite being passed several times. I passed a fully loaded tourist walking the steep part near the top, but managed to grind it out in my lowest gear.

The top was cold, windy, and crowded, so I joined some other cyclists in the lee of a closed hotel to eat and layer up. Then I carefully made my way down the big side of the pass, through ski lifts into the spectacular Val d’Isère. Somewhere below Tignes, I turned onto a side road that climbs to join the Petit Saint Bernard route, avoiding a drop to Séez. This looked like a residential street on the map, but signs every kilometer proudly proclaimed it the final climb of a former Tour stage.

Feeling wrecked, I stopped at a campground to have a Coke and consider my options, but I was not about to pay $20 for a spot next to an RV, so I continued to the next town, grabbed more food, and found a flat pullout below the pass. I suppose I could have continued to Courmayeur, but I was hurting after 90 miles and 14,000 feet of climbing, and did not think it would save me a day. As it turned out, the hut I was hoping to hike to the next day is closed, so I get to sit around and write this, then do an early valley start tomorrow.

4 responses to “Oulx to Courmayeur”