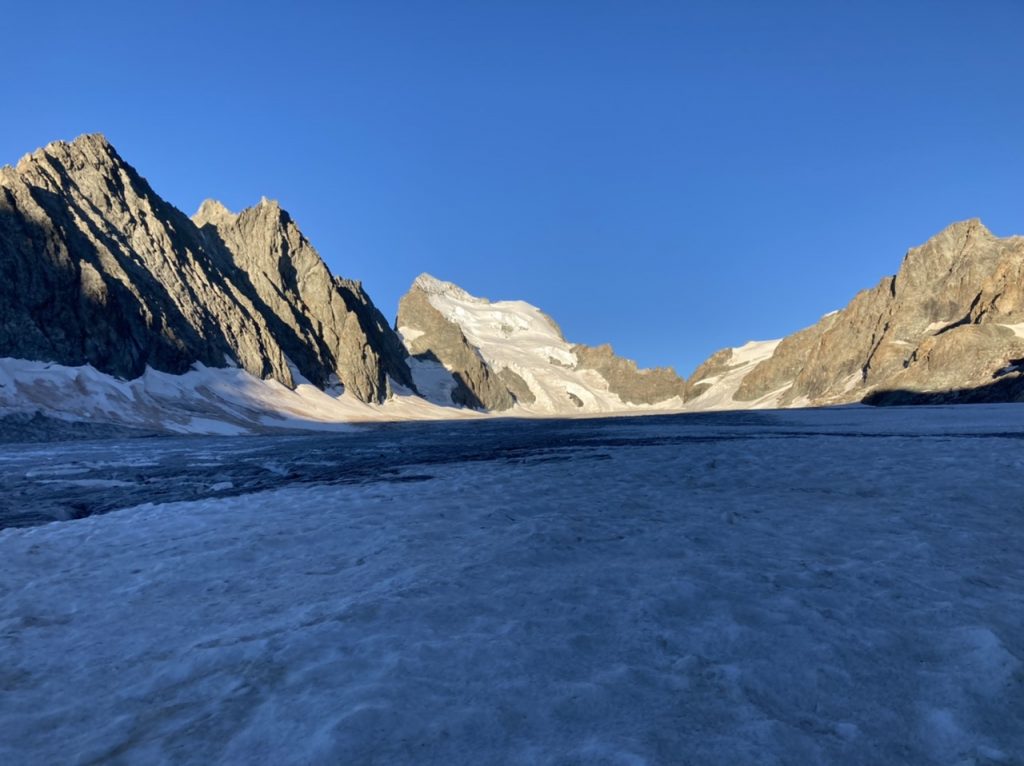 The Barre des Écrins is one of the easier 4000m peaks, and I had done it before, so it served as a good warmup. This writeup will unfortunately be brief, as I am tired and will busy for the next few days.

I started from the campground around 4:00 biking by headlamp, and locked my bike to the trailhead sign. I continued hiking, catching one pair of dayhikers shortly after headlamp time. I started on the bare, gritty glacier without crampons, but thought better of that as I tried to pass a rope of five.

There were a reasonable number of parties on the upper route, most ahead of me but a few behind. The bootpack took a circuitous route very high left before a long traverse right to the saddle with the Dome du Neige. I quickly went over to tag that, then returned to wait for a couple guided groups on the crux transition to the upper rock scramble. One of the clients didn’t trust his crampons, but the other handles it well. I had a chance to talk to her, and she turned out to be a professional Nordic ski racer. She seemed impressed by my speed, as I was by her natural mountain skill despite a lack of experience.

Last time I did this, I was scrambling wet rock in fog, and saw nothing. This time it was clear and dry, and I enjoyed both the steep, positive rock and the views of Mont Pelvoux and the Ailefroide to one side, and La Meije to the other. I sat on the summit for a few minutes, then returned before the snow softened up too much. There had been a couple of crevasse crossings with a disturbing number of leg-shaped holes in them, and I wanted to get past that. Euros are good at sketchy snow bridges, but fortunately the ones just ahead of me were mostly heavier when including their gear, so the crossings were freshly tested.

I felt no need to run below, so I just fast-walked back to work trailhead. I passed several large groups from the French army on my way, presumably headed up for mountain warfare training. Once back at the campground, I quickly checked out to avoid being charged for another day, then sat around recovering for awhile. The days are long, though, so I had time to put in 35 miles on the bike before stopping in Oulx (pron?). This is the model I hope to follow on many days: alpine start, climb a peak, then ride a few hours in the warm afternoon and evening.

This entry was posted in Europe and tagged europe2022. Bookmark the permalink.