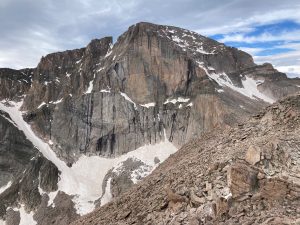 Complete view of the day

Longs Peak is one of Colorado’s better fourteeners, with a dramatic east face and no route to the summit easier than class 3. Unfortunately it is near Greater Denver, making it a circus most of the time, so I have not climbed it since doing so with a friend’s sister in the pre-blog days. That time, we went up the Loft and down the standard Keyhole, and I remember being amazed at the summit crowds, and amused by the people clinging for dear life to the entirely walkable final slabs. This time I returned for two slightly more interesting routes: Kiener’s and the old Cables. The former is likely the only way I will ever climb the peak’s east side, while the latter fits in with Lady Mountain as a relic of an age when the Park Service had a sense of fun. 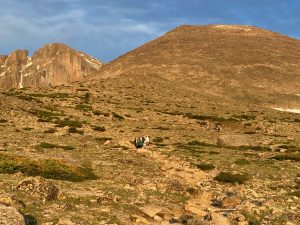 Camped all the way over on the non-Denver side of the range, I woke punishingly early and had a breakfast of coffee and a sandwich as I drove over Trail Ridge Road. This put me at the trailhead just after headlamp time, where I joined a dozen or so people heading out on the week’s best weather day. I passed a number of them, grateful that the gloom hid my ice axe and spared me any curious glances or questions. Longs is often done for speed, so I felt like I should be jogging the pack trail’s tedious switchbacks, but I was either feeling the altitude or just not in the mood. Emerging into the often-windy alpine, I was surprised to see two long lines of what seemed to be High School students heading down, dressed as if for a field trip. A few were chatty amongst themselves, but most of the girls wore the typical teenage affect of straight hair, blank eyes, and downcast faces. 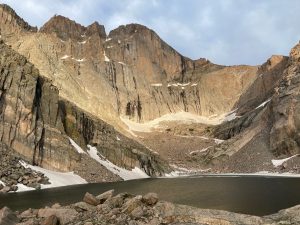 Chasm Lake and the Diamond

Eventually reaching the Chasm Lake junction, I semi-arbitrarily decided to go clockwise, up Kiener’s and down the Cables. Both routes have similar ratings, but in retrospect this is clearly the correct direction, as Kiener’s is more sustained and the Cables Route is not hard to find. I continued hiking along the trail to the old cabin and privy, then followed a fainter path to Chasm Lake. The Diamond glowed intermittently as the sun poked in and out of thin clouds to the east. I picked my way through the boulders around the lake’s north side, then plodded up the snow to what may still be the Mills Glacier. I sat to put on my crampons as I watched someone start up the lower half of the Diamond. 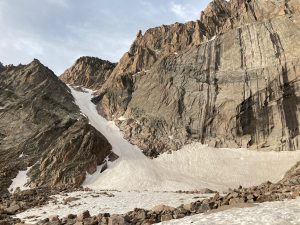 The snow in Lamb’s Slide had not solidified, so it was mostly slush with a punchy crust. I meandered some as I plodded up the couloir, looking for firmer spots or trying to follow bits of old boot-pack, but never found a satisfying line. Perhaps because of the unaccustomed altitude, I was feeling sluggish, and frequently stopped to gasp and rest my burning legs. The entrance to Broadway is a chossy ramp just above a black rock band. Here I took off my crampons for the day, put on my pack, and stowed my axe in my usual “samurai carry” in case it proved useful again. 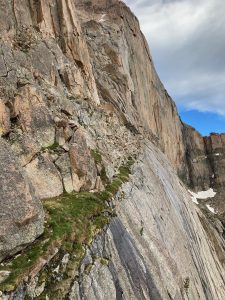 Some hiking on the ledge led to the left side of Broadway, the remarkable ledge splitting the Diamond. Though sometimes no more than a foot and a half wide, it is nearly flat and mostly covered in turf. Apparently it can be treacherous earlier in the season, when it collects steep snow, but now only a couple of easily-avoided snowbanks remained. I continued on the ledge to the Notch Couloir, then headed up and right as the route description suggested. 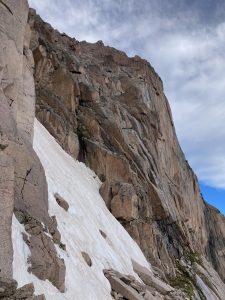 I think the correct route climbs the couloir a short distance, but I immediately attacked the rocks to its right, finding steep climbing in a chimney with wonderfully positive holds and grippy rock. After some more like this, I found myself in a sort of dark, wet alcove, with exits left and right. I chose the right at random, and found it deposited me on ledge-y terrain where I managed to make things harder than necessary for myself in a few places. Above this, I found easier going on a class 2 mix of grass and small blocks. 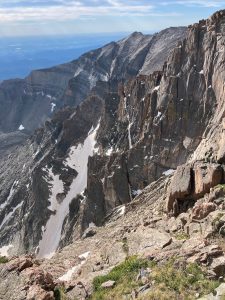 I was enjoying my progress, and the views behind and below, so I did not pay much attention to the route description. Where I probably should have traversed around a corner, I decided to directly attack one of a pair of dihedrals. I tried the left (right-facing) one first but, not liking it, backed off. The right one was positive and more to my liking, but steep enough to make it feel like the day’s crux. I took my time, then panted my way up the easier boulder-hopping to the summit plateau, arriving practically right at the highpoint. 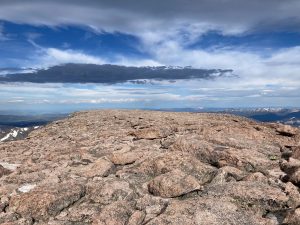 Thanks to my early start and direct route, there were only about a dozen people on top, and with plenty of room to spread out, I antisocially distanced myself to eat a sandwich and decide how to proceed. I could easily descend the standard Keyhole route, following the painted bull’s eyes, but decided to stick to my plan and descend the cables. I wandered off across the plateau, found a cairn on the right, and meandered my way down class 2-3 ledges and talus, finding bits of trail here and there. I saw a pair of climbers lower down, and aimed for them, descending near the east face, then traversing back left on a helpful bootpack through a couple of minor snowfields. 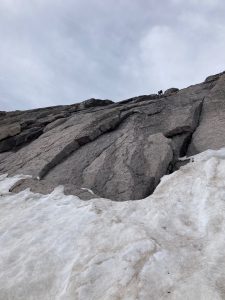 I caught the climbers at the second old eye-bolt, a relic of tougher tourists in a more carefree age. They turned out to be a couple with roles unusually reversed: she was the more experienced climber, showing him how to clip in for a rappel. A brief bout of awkward conversation established that (1) Kiener’s was “in,” and (2) they had oddly gone up the Keyhole trail and chosen to descend the Cables. As usual, a rope was slower than no rope, and by the time I carefully downclimbed the wet crux and passed the end of their rope, the guy was still futzing at the top. I plunge-stepped down a snowfield, then traversed right toward Mount Lady Washington before the muddle/tragedy behind me resolved itself.

Mount Lady Washington does not have quite enough prominence to make it a real peak, but it was the most convenient red dot in the area for me to turn green, and right on the way back. I passed a haul bag and water bladder at an odd spot in the rocks, which I might have bootied had there not been a couple of guys scrambling by on this odd line. Neither had an axe or crampons, so I chopped steps across a small snowfield for one, then continued on the boulder-hop to my minor summit. The talus was almost all wonderfully stable, but large enough that I had to pay attention in choosing my path. The descent to the Chasm junction was long, but possibly more pleasant than the beaten-in trail. I finally put away my hoodie and gloves, stowed my axe properly, rolled up my pant legs, and took off at some semblance of a jog to make the three miles pass more quickly. I passed a steady stream of hikers along the way, headed perhaps for Chasm Lake, and reached the ranger station before lunch. The weather continued to hold, making me wish I had gone for my more ambitious plan, but this loop was enough, and enjoyable besides.

Chasm Lake and the Diamond

Complete view of the day

3 responses to “Longs (Kiener’s to Cables)”