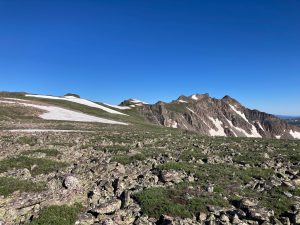 Mount Zirkel is a prominent but not particularly high mountain deep in the redneck lands of north-central Colorado. It has been a low priority on my to-do list for some time, and seemed like a good way to break up the drive from the Tetons back down to Colorado. My various mapping programs really wanted me to drive around through Craig to get there, but it seemed shorter to head east from Baggs, Wyoming on county roads. This was probably slower, with a long stretch of good dirt, but definitely scenic. It also made me aware of this repugnant resort, with rooms starting at about $2000/night and a perfectly-paved driveway leading from the dirt road to what looked like an overgrown Dick Cheney “cabin.” I continued on pavement toward Steamboat for awhile, then turned off toward the Slavonia trailhead, passing through a herd of dirty sheep guarded by dogs that, surprisingly, did not attack my car. 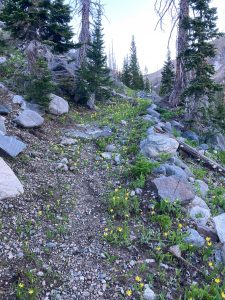 I woke before 5:00 at the very no-camping-y trailhead, ate a leisurely breakfast, and was off well before sunrise, hiking up the trail to Gold Creek Lake, one of two approaches. The first two creek crossings were easy, on a bridge and a deliberately-placed log, but the third required a bit of searching upstream to cross the stream’s two forks on spontaneous deadfall. The snow on the trail was sometimes soft, but it had been cool enough overnight for the stuff in the shade to be supportive. I lost the trail around the Slavonia mine, and continued by picking my way through boggy slopes and snow-patches, aiming for Red Dirt Pass on the northeast side of the valley. The snow turned out to offer the most friendly path here, firm but with a crunchy, grippy surface. 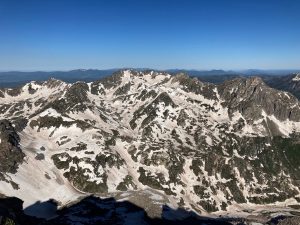 I continued to find bits of trail above the aptly-named pass, but mostly enjoyed easy cross-country travel across tundra and occasional snow to the final summit knobs, where a final bit of boulder-hopping and ridge-walking led to the top. There was a bit of a cool breeze from the west, so after admiring the east face of Big Agnes, I found a seat on the other side to eat my ridiculous cookie (thanks, Tom!). 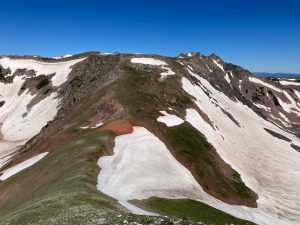 Knowing that I wanted a bit more than Zirkel by itself, I had plotted out a route back south over Flattop to Ute Pass, with a possible detour to Bear Mountain. I retraced my route to Red Dirt, then found more faint use/game trail and easy cross-country to the highest pile of rocks on Flattop’s expansive, verdant plateau. The weather excellent, but I lacked the food and energy for a three-mile detour to Bear, so I headed straight down the pass. (I should bring more of both next time…) The trail was mostly buried on this west-facing slope, so I did my best to link boot-skiable snowfields on the descent. 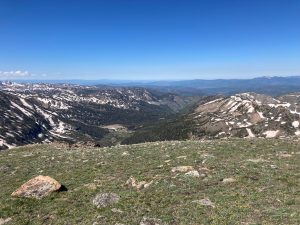 I tried to find the trail again down near Gold Creek, hoping it had a convenient crossing log, but gave up and forded the small stream. After wringing out my shoes, I located the trail and slogged back up to the Red Dirt Pass trail to close the loop. Most of the trail was pleasantly joggable on the return, and I even found the energy to jog a few of the short climbs. Below the Gilpin Lake junction I met a surprising number of hikers. Normally peaks this low and far from Greater Denver are quiet during the week, but the parking lot was full when I returned. I took my time eating lunch, then drove back through the sheep and continued southeast, steeling myself for a brief encounter with the Front Range. It has all the traffic, crowding, and regulation of the Bay Area, but at least its mountains are slightly better.