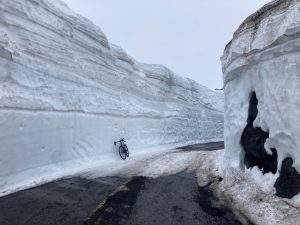 The greater Bend area has a wide variety of cycling, which I have been exploring based on recommendations, maps, and Strava segments. For pavement, there are many flat country roads in the plains to the east, hillier options to the west and south, and a couple of major paved climbs. For gravel and graded dirt, there are miles of National Forest roads of all types, as in much of the area between Lassen and Hood. Finally, there is a range of single-track, from the smooth trails north of Sisters to the bro-friendly manufactured downhill trails off the Mount Bachelor. However both roads and trails are in a transitional state now, and though the volcanic soil does not become terrible mud, the snowline can be sudden, and varies quite a bit based on aspect and rain shadow. Unfortunately, this same volcanic soil also turns into chain-destroying grit and powder that becomes progressively deeper over the dry summer. 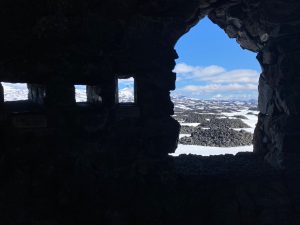 McKenzie Pass is an historic route over the Cascade crest near Sisters, south of the current Santiam Pass, between Mount Washington and North Sister. A similar route was used by Natives, with the road built as a toll road in the late 1800s and becoming public shortly thereafter. The pass features a stone lookout tower, built by the CCC and Forest Service back when they did that sort of thing. It is semi-famous among cyclists for being plowed but closed to cars in the late spring, at which point it is bordered by huge snowbanks. The local bike shop in Sisters, Eurosports, even has a pass conditions page and sells jerseys.

I have ridden the east side twice now, a steady, gentle climb of about 2000 feet from town, once in some unfortunate rain and the other time with clear skies on a weekend, dodging other cyclists on my way down. I was hoping to ride the whole pass, dropping 3000 feet to the junction with Highway 20 on the other side, but that is still being plowed as of May 23, and may not be clear in time. Since the pass is a short ride by itself, I added on a side-trip both times. The first time, I followed the good dirt forest road to Trout Creek Butte, which has an old lookout. Though the Butte is higher than the Pass, it is in the rain shadow, so the road was almost entirely dry to the summit. The second time, I tacked on some of paved Forest Road 11 near Black Butte, returning to town via Indian Ford Road. 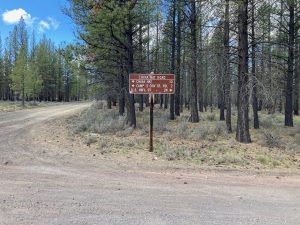 The Newberry Volcanic Area, which I have written about previously, has a plethora of dirt roads and trails in addition to the main crater and highpoint. Many of these seem to be popular with OHVs, though, which churn the surface and make it unpleasantly soft for cycling. However, the major roads are more for cars, and therefore remain passable. The main area around the highpoint receives more precipitation than the surrounding area, which caused problems for me when a loop I intended ventured a bit too high. I ultimately exited to Highway 97 near La Pine, which has wide, safe shoulders but too many semis and speeding cars with loud A/T tires. The dirt roads north and east of the caldera are drier and quieter, but can be washboarded, loose, and dusty. 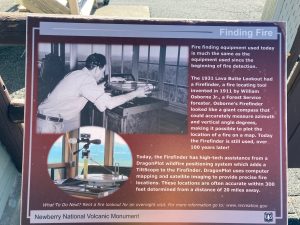 Lava Butte is the perfect reddish cone to the west of 97 south of Bend. It is a deluxe Oregon peak: not only does it have a lookout, road, and cell service, but the road is paved and closed to cars, the lookout is manned and has an enclosed interpretive center beneath it, and the cell service is provided from somewhere else instead of unsightly nearby towers. In addition to its own recent lava field, Lava Butte has panoramic views of larger volcanoes in all directions, from Jefferson and possibly Hood around through the Sister and Diamond to Paulina. There are, of course, ridiculous Strava records both up and down the road, with which I did not try to compete.

This entry was posted in Biking, Oregon, Tourism. Bookmark the permalink.