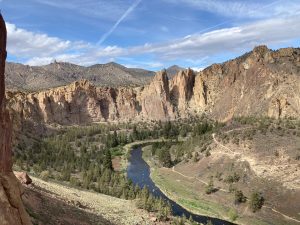 Smith Rock is a well-known cragging area about a half-hour northeast of Bend. Being low and east of the Cascade crest, it is warmer and much drier than areas west of town, with the best times to climb being Spring and Fall. It lies on the boundary between basalt flows presumably from the Newberry Crater and older John Day welded tuff, with the climbing being on the latter. The rock is sharp, sticky, and pocketed, with most routes being sport-bolted and single-pitch. This is not the kind of place that normally draws me, but I was nearby and in the midst a sort of crash project to improve my climbing, and Jason was local and free for the weekend. With a late start on Saturday, and a race going on, we were unable to park in park, instead stopping at an intersection outside the broad “no parking” zone and jogging a mile or so past the tricked-out Sprinters sprouting expensive cell boosters. 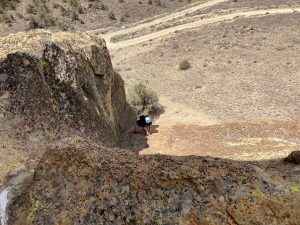 The first day was for scrambling, so we hiked and jogged over to Round River on Koala Rock, at the right/east end of the park. Since it was only 5.4, I decided to head up in my trail runners. It had been awhile since I did any real scrambling, so I was slow and tentative, but this was necessary practice to get back into scrambling headspace. Jason had it worse: he is better than I am at getting free stuff, and that stuff included some Hoka-style clown shoes which he had decided to wear. As expected, they were not much good for scrambling, so he had to work a little harder. We topped out, then went around the loose, steep climbers’ trail down for another lap. I felt much more in my element this time, thoughts of slipping and bouncing no longer crossing my mind.

Instead of returning down the climbers’ trail, we continued to the top of the “peak” so I could get a point, then continued down another use trail to rejoin the main trail system. Rather than return to the trailhead, we took a gradual, switchbacked trail down the back, which was perfectly graded to open up and practice running at a 5-something pace. After circling around the back of the park to the west, we climbed back to the summit of Misery Ridge (another peak point!), then took the tourist trail down.

Passing by the bottom of Super Slab, we hesitated for a bit, then decided to scramble it. Since it was 5.6 and had “slab” in its name, we opted for rock shoes. The first pitch had little to do with slabs, climbing a ramp/corner/crack to a fat ledge. I scampered up, then watched another pair on the second/third pitch while waiting for Jason who, after awhile, decided he wasn’t feeling it and told me to go ahead. I continued across an exposed traverse, then started up the last pitch, which was indeed slabbier. The other party was unfortunately still there, the leader taking his time on his first trad lead. I tried to pass a couple of times, but the slab to the left had fewer features and more lichen, neither of which I liked. After I hung out at a couple of rests, the guy found a spot where he could pull off and let me pass. The final moves were a bit thin, but I had rock shoes and my head was back in the right place, so they didn’t give me much trouble. I had more trouble with the top-out, which descends into a gully and climbs a gritty dryfall, then traverses again to climb a weird chimney. Maybe I should have left my rock shoes on a bit longer.

I jogged back down the trail to meet Jason, then we returned to the trailhead. The final bit of trail climbs away from the river, with a paved portion that it is “traditional” to sprint. I didn’t have fast-twitch muscles in my 20s, and time has not improved that situation, so I was thoroughly trounced. After dinner we headed to Redpoint Climbers Supply, a combination coffee/gear/beer place that caters to every phase of a typical climber’s day. I am not one for late nights or hanging out, so I sat around mostly checked-out for awhile, drinking a kombucha, until it became socially acceptable to sleep.

Sunday was rope day, so after another late start, Ashley dropped us off at the trailhead with the gear before parking back where we had the day before. The sunny moderates were all full, so we kept going to the much more pleasant shady side of Asterisk Pass to do a few 5.8s. I led them, then we took turns toproping. By the end, I had a good feel for Smith’s rock: grippy and pocketed, but sharp and potentially quite painful. I would probably not enjoy crack climbing there, but I felt ready to do more scrambling or harder leading if I get a chance before I move on.

Round River is somewhere over there

Monkey Face, too hard for me

This entry was posted in Climbing, Oregon. Bookmark the permalink.