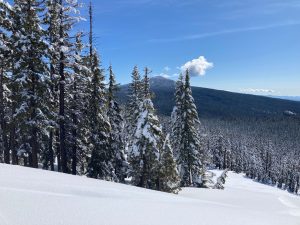 My legs were a bit tired, and my shins a bit beaten up after eleven hours in ski boots. But the weather was good and I was in the area, so I looked around for a suitable shorter objective and found Maiden, a P2K (peak with 2000 feet of prominence) behind the Willamette Pass ski area. I drove back to the pass, found a spot off the Odell Lake Road where it seemed I would not get towed, then got ready and hiked back along the highway with skis on my shoulder to start at the closed lodge. The ski area is oddly designed, with runs on all sides of Willamette Pass Peak including the south one facing the highway. Despite there being plenty of snow in woods on most aspects, plants and rocks were showing through on these, so the ski area had closed for the season. I stepped off the highway, then skied ironically across its empty parking lot. 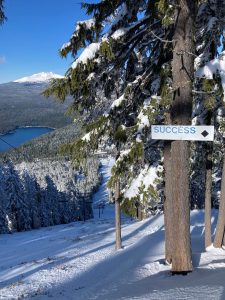 Not knowing the area’s runs, I skinned straight up under the lift, switchbacking up the headwall between the basalt and manzanita. The trees were again covered in rime and, looking back, I saw Diamond gleaming in the morning. While today would have been a more scenic day for my long ski, the previous day’s clouds probably kept snow conditions better given my late start. I stopped at the top of a black diamond called “Success,” wondered if its neighbors were named “Delusion” and “Insatiable Emptiness of the Soul,” then continued across the ridge to the higher, northern lift and summit. 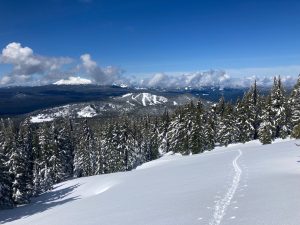 Here I got my first clear view of Maiden, still almost three tree-covered miles away. I transitioned near the lift, then took my only good turns of the day down a backside run leading nearly to the saddle. I switched back to skins to follow a blue-diamond-marked cross-country ski route for awhile, took the turn toward Maiden Lake, then left the markings at a flat area to head directly up the conical peak. The slope was mostly gentle and tree-covered, but it was warm and the sun had been up for awhile, so the snow began glopping on my skins. I periodically knocked them against a tree or ski pole, and was rewarded when one pole finally broke near the summit. This is the inevitable end of repeated conflict between poles and metal edges, but these poles were less than a season old. Luckily I had paid good money for them at REI, and was headed through outdoorsy Bend, where I could warranty the shoddy things. 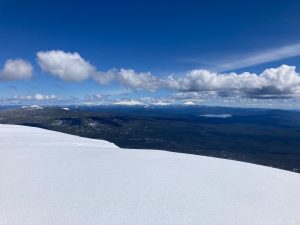 Reaching the summit on one pole, I admired a clear view of about ten volcanoes, with the Sisters and Bachelor to the north, Paulina and Diamond to either side, and the Crater Lake area to the south. There was much snow to be enjoyed if it would only stop falling from the sky. The reward of a fast ski down was denied to me, as the fresh snow had all turned to sticky glop, even in the shady trees. Ski poles seem silly for going downhill, as you flap them at the ground and slide past in an instant, but it feels surprisingly awkward to ski without one. That, the trees, and the unpredictably sticky snow made the descent frustratingly slow.

I shuffled back through the woods, then returned up the backside of the ski area before transitioning once more to cautiously stick and slide down the front to the highway. I noticed a few more fresh tracks, but saw no other skiers, and only a couple of cars parked near the highway. Back at the car, I laid out my wet gear on the hood to begin drying, then took my time preparing food before heading into Bend. Weather and ski boot-related injuries would make skiing daily for a month unpleasant, but I had other plans.

This entry was posted in Oregon, Skiing. Bookmark the permalink.