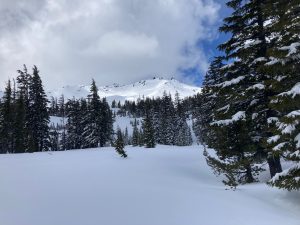 At last it was time to go skiing again. To survey the surrounding snow-clad peaks, then huck the cornice and schralp the gnar. To be pitted in blower pow, carve sick turns on a rad line, take face-shots on fat sticks, then harvest corn like John Deere… Who am I kidding? Skiing has almost as much ridiculous dude-bro jargon as weightlifting (e.g. “yoked,” “shredded,” “swole”), perhaps because both sports generate enthusiasm and lack complexity. But I am not that kind of skier, and Diamond was definitely not that kind of peak. Skiing, in its original form, is mostly walking with hunks of wood, plastic, and metal on your feet to keep you from sinking into snow. Sometimes you hike with those hunks on your back when the snow is missing or ill-behaved. Occasionally you slide on them and try not to fall. The last part can be thrilling, but comprises less than a tenth of the overall activity. 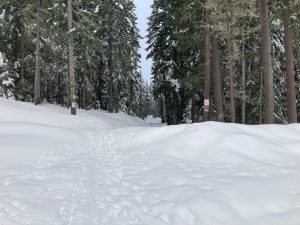 Skis from the car!

Recent and previous plowing had left most parking along Willamette Pass blocked by snowbanks, but the sno-park just to its west was open and, it being May, no longer required a special permit. I slept there, availed myself of the outhouse, then started off toward the peak, skiing right from the parking lot. Coverage was a bit thin for the first few hundred yards, but there seemed to be several feet of snow in the woods above 5000 feet. I followed an old skin track along the PCT to Midnight Lake, then took off generally uphill where it ended. 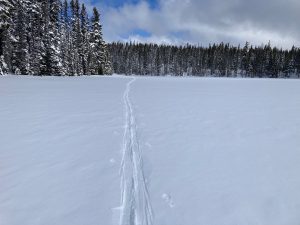 Thanks to the dense woods and flat terrain — typical Oregon — I could see none of my surroundings. I also soon lost the trail in the snow, but fortunately did not matter, since the woods were mostly open and I could skin wherever I wanted on the gentle slope, occasionally looking at my phone to make sure I was still going in a straight line. Even when skinning across the relatively large Yoran Lake (alas, poor Yoran!), some combination of woods and clouds blocked my view of the summit. 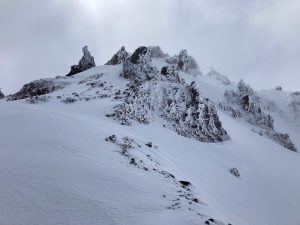 After yet more woods, I finally emerged under Diamond’s northeast bowl, and my route became only slightly clearer. The peak is normally skied from the west, but that way involves much more driving, and bread is cheaper than gas. Coming from the northeast, one is faced with a long, undulating ridge leading to the summit, and a long east spur splitting that face. I skinned up the bowl, then chose a non-corniced place to reach the the ridge, where I hoped to find easy travel. 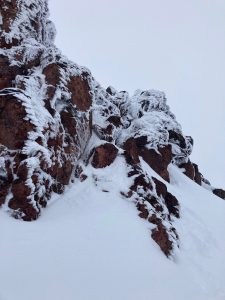 Unfortunately, what I found was a cold west wind and a mixture of scoured ground and slick rain-crust. I carefully skinned south as far as I could, then put my skis on my pack to boot up to the first bump on the ridge, a collection of choss-pinnacles covered in rime. This turned out to be a shorter version of my Shastina struggle, clomping up, down, and around what was probably class 3 rock in ski boots, kicking at highly variable snow to see what offered firm steps, and what was either impenetrable ice or unsupportive powder. 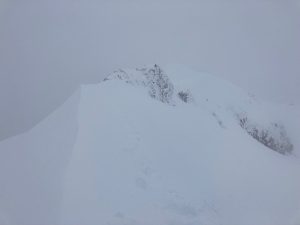 I eventually made my way up and over, and put on my skis to skin the gentler ridge, only to find that the snow remained highly variable and wind-sculpted. Worse, the clouds had descended, so everything was gray and I had no depth perception. I tried to follow the ridge as best I could, looking for the faint black shapes of protruding rocks as indicators of solid ground, and otherwise trying to keep one ski on either side of the snow-crest. I poked ahead with my poles to find both this crest and the frequent dips across the ridge, neither of which I could really see despite uselessly bending over and squinting. Once I even slid off the left side, then spent a few minutes tossing my skis back on top and doing a “beached whale” to regain the crest.

I considered turning around, but conditions were frustrating rather than threatening, and I had my phone’s map and GPS to guide me. I thought of leaving my skis several times before finally ditching them only a hundred yards or so from the summit, from where I seemed to have a clear line down the east face. From there, I wallowed along the crest to the Peakbagger app’s red dot, turned it green, and turned around. Such is the peakbagger’s transcendent communion with Nature. 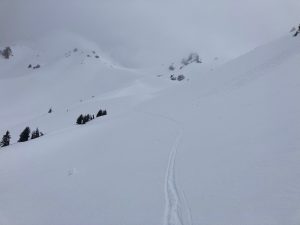 Clearing on the traverse

Even having passed only a few minutes before, I had a difficult time following my tracks back to my skis, as they were partially filled-in and invisible from more than about ten feet away. I transitioned, clicked in, and made a trial ski cut across the east face. The heavy, gloppy powder was not going anywhere, so I made my way down in slow, careful, awkward turns, unable to ski confidently without depth perception. The clouds thinned as I descended, and as soon as seemed reasonable, I started on a high traverse north, hoping to cross the east ridge high enough to return to the Yoran Lake drainage. 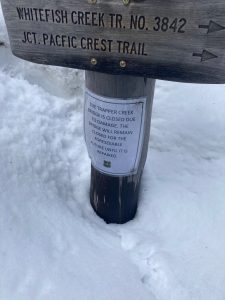 I made quite a bit of distance on my traverse, but not enough to reach my outgoing path without some climbing. Fortunately the terrain is all gentle, the woods open, and I had a map and GPS. I spotted another trail following Trapper Creek back to the west side of Odell Lake, and set off down a side-creek to join that, and thereby return to the pass. While it was not quite sunny, it was warm and bright enough to make the snow sticky, and my route was generally downhill, so I progressed best by shuffling along with free heels and boots in “walk mode,” but without skins. This was long and tedious, and I dared not play music lest I kill my phone battery and hence my map, but I needed to plan, so the forced lack of distractions was helpful. 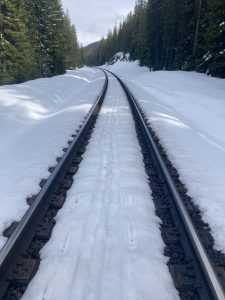 I finally picked up the trail just above where the creek turns east, and followed it to where there used to be a bridge. A sign said that it had been washed out and that the Forest Service, in its dotage, would be unable to repair what it had once built. Past this sad sign, I continued to the train tracks, then skinned up between them for awhile, defiantly listening to podcasts rather than for approaching trains. I fortunately had no run-ins, and left the tracks just before a tunnel to cross Pengra Pass and return to my private sno-park. At twenty-some miles and over eleven hours, this was the longest thing I had done in awhile. I enjoyed the feeling of a day well-spent, but as I hung various bits of wet gear to (fail to) dry inside my car and shoveled in food, I realized that this was unsustainable for more than a few days.

Skis from the car!

Some stuff toward home

Clearing on the traverse

This entry was posted in Oregon, Skiing. Bookmark the permalink.